The State of the Noah (and Lauren) Address 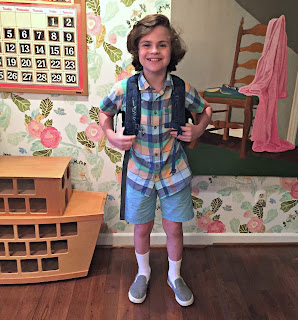 In the springtime, when Noah went to an admissions visit at his old school for evaluations, I wasn't sure about everything. Would my child be ready for what they call the "rigor and pace" of the middle and upper school? Was it a good decision to toss him back into the fast moving currents of a competitive private school? Didn't I whole-heartedly embrace the message in the movie "Race to Nowhere, " - that the current American educational model promotes painfully over-scheduled extracurriculars, crushing academic pressure, nearly inevitable student burnout and the loss of a free childhood? I did! I did believe all of these things. (I still do honestly).

So that's why, after his three-day visit in April, after they delivered the news that he was accepted back in, I looked Noah squarely in the eyes and said: "Do you want to do this? Are you ready to commit?"  He squirmed in his chair, scratched his head and let out a sigh.  "Ohhhh I don't know what to do," he said, "It's a lot of work."  I also thought, "It's a lot of tuition!"

The three of us decided that until Noah was sure that he wanted to return and SURE that he was up to the challenge and committed to doing his best, school could wait. I loved homeschooling in theory anyway, loved the"good days," at least,  and the fun adventures and the excitement of learning in new and dynamic ways. I love the slow pace and the freedom, and most of all, living outside of the what society dictates. I LOVED BEING A Non-joiner, it THRILLED me!

So with a bit of fear and some worries of regret, I turned down the school contract for the 2017/2018 year and we went on our way.

Then summer hit. Summer, long stretches of day when Noah's study group at his tutor's was not in session. His soul outlet for social interaction beyond the "playdates" that he so actively resists. All he wanted to do now was play his online computer games, game while talking to friends over Skype. Nothing could entice him to willingly go do something else, no trip to the pool or a lake, no museum, park, movie, playground or even amusement park. He just had zero interest in anything other than his video games. We kept up with our plans to homeschool year-round, which included summertime math and writing, but getting my tween to sit down and do that was like pulling teeth. Not like it was easy for any part of the past two years, but the older Noah became, the more complex it got, the more I waited for his intrinsic motivation to kick in.

One day, in the beginning of August, I came home to find him sitting in front of his computer yet again, unmoved, in exactly the same spot that I saw him hours before. Something inside of me just surrendered. It's like they say- a switch just flipped. Involuntarily, I swear, something made me blurt out words I did not think I would ever blurt! "Noah, I can't do this anymore. You need to go back to school."  And just as shockingly, he replied instantaneously with an enthusiastic: "Ok!"

That was perplexing....for us both! So it was, a conversation and a few emails later, that Noah was back at his old school, re-testing his math, visiting for orientation, and today, he JOYFULLY rode off on his bike.... 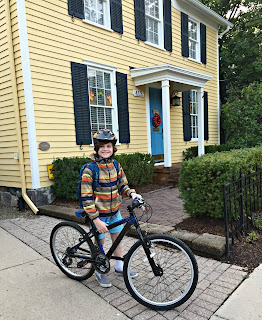 *On a side-note, as excited and super happy as I am for us all to have this new chapter at school, I can't deny that I have carried with me a bit of sadness for the loss of our homeschooling days and the truly wonderful homeschooling friends that we've made. I feel as though NOTHING else in my life has changed me as much as the experience of Noah unexpectedly leaving school and having to find our way. Homeschooling taught a most valuable thing- that LIFE IS OURS TO MAKE IT. That you CAN do what you need to do, that you CAN do what your child needs. That you DON'T have to let others pressure, scare or worry you into taking the path that you think is not right for your son or daughter. While I had heaping amounts of encouragement and support from friends, family, teachers and doctors, a few warned me that homeschooling could be a disaster, that once I stop trying to FORCE him back into school, that he will NEVER go back!

Well, look at Noah now- happily going back to school under his own steam. Happy and healthy, not worried or anxious at all. A fine writer, a great reader, a boy who can carry his own in math. Friend of friends and eager to start an after school history club. HE'S FINE! I'm so grateful that I listened to my inner voice and didn't let fear stop me form doing what I felt was best for us.

My dear readers, no matter what you face in life, whether it's a parenting issue, or your career or making a huge decision, know that it's ok to follow your heart and if your heart is telling you to, take a little break from following the flock. It will be ok. 💗 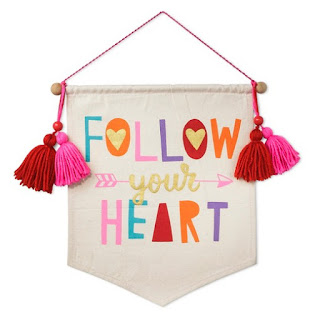 So what's an ex-homeschool Mom to do? Well, for me, it included a new 6:00am wake-up call, the re-instament of my Blogilates routine:

Some laundry, some cleaning, an errand, a dog walk, the ironing, dinner prep and a lot of coffee. A LOT of coffee....

One of my newest ex-homeschool Mom duties though, is to hopefully off-set some of the tuition costs through working on this blog and other places in this vast blogosphere.  Also, I STARTING AN ONLINE CLASS and TRAINING in a week!!! More on this in another post, but hopefully, it will lead me to being able to support, encourage and coach YOU in the near future! 😉💗😉

In the meantime, Josie and I promise to not waste anymore time playing around with the Photo Booth  app. 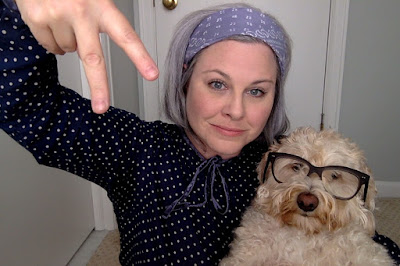 Instead, I'll come to you next time with my NEW FOUND HAIR PRODUCT LOVE that has smoothed out and added shine to my hair unlike any other product before it. I've been testing this for you guys for a few months, and since there hasn't been any issues, I'm excited and ready to share!!!

Ok, this is my cue. I'm off to figure out dinner. I think it's going to be something easy tonight, like this One Pan Cheesy Chicken, Broccoli and Rice from the Girl Who Ate Everything!  I'll let you know how things turn out, and for more of my top-pick recipe, from family meals, to vegetarian, Trader Joe's dishes and healthy selections, please visit How Bourgeois' Pinterest page!

Well, almost. Today still counts, right? It's September, it's the first day of school! It qualifies as "fall," right?????

Welcome back. I've been wondering how you are getting on. Glad to hear that everthing fine.

Love this! We are still homeschooling but I understand the need for change. Hugs, my friend! Good job, Noah, on being brave! Kendra

So nice to hear that all is well and looking forward to your upcoming posts!