1 Simple Tool to Instantly Change Your Life for the Better. NOW! 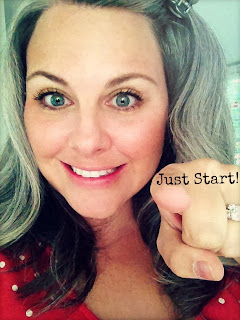 Hi. Happy Monday! Do you want to know a secret? I've figured out how to make BIG changes in my life with just one,little step.

You know what it is? You JUST START!
Yep. The only thing you have to do to change your entire life is to just start!
How simple is that!?

Allow me to explain.... if you're anything like me, you might be classically indecisive, weighing every question, choice and option before committing. It could take you a long long time to make a decision, or perhaps you change your mind several times in a row.

Do you hem and haw over things? Do you procrastinate?
Have you had goals for years that you haven't gotten around to tackling? A common example: are you somebody living with a basement,garage or a HOUSE that is totally full and exploding with old STUFF!? And is the clutter, lack of decisiveness and not meeting your goals stressing you out and getting in the way of your happiness?

What you need to do the is: JUST START!
And voila! Instant better.

BUT, so is life. Life is not always easy. Why not make the best of it though, give yourself the gift of learning how to start.

For example: I have gone back and forth, back and forth in my mind on at least four separate occasions, whether or not to go to the salon to have my hair glazed. Glazing comes in clear and  transparent color shades. It smooths out your hair, and adds depth of color and shine. In my case, it also helps to combat the yellowing effect that pollution and hair products can have on white hair. I've only had a glaze once, but it left my hair soft, shiny and bright.

Finally, after three months of being annoyingly wishy-washy, and contemplating a glaze for the fifth time, it hit me: Lauren, JUST START!

What that meant was, just go, just do it, just start. Stop with the over-thinking and the "what-ifs" and the excuses. Start at the beginning, pick up the phone and make an appointment. And that is exactly  what I did.

If I had "Just Started" the first time around after an appropriate amount of thought, my hair would have been in better condition months ago.
It's like that with everything though, with all of our goals and contemplations. YES, it's important to think things through a little bit, impulsivity is not a good thing. Afterwards though, you can spin your wheels indefinitely if you don't take the self-initiative to just start!

And that is my Monday message to you. Take this two-word phrase and put it in your mind. Whenever you find yourself thinking about a project or a "to do" or a goal that's in front of you, don't hesitate, yell out: "Just Start!" and then do it!

I promise you, more than half the battle is beginning. Once you're on your way, you'll be happy that you started.

Make this week a time to change your ways. Come along with me as we learn and grow into our best selves!

So true..just start! I have wanted to grow my gray in for a few years now,but it was never the right time. I finally realized it's always going to be "something" if I let it,so I just did it. I have a long way to go,but I started and it's such a good feeling :)

I'm so excited for you!!! I too had that "there's never going to be a good time" feeling for a while. I can completely understand it. Sometimes just jumping in is the only way to go.

I know that beginning phase is not the easiest, but if you stick with it, I promise you'll be living the results!

Good for you Lynn! Keep us posted.
xoxoxox,
Lauren