Living With Uncertainty & Anxiety the Bummer

As completely silly as it is, no matter how much I logically know that none of my fears make much statistical sense..... I have struggled with anxiety over my health for many years now. I'm not a  hypochondriac because I don't think that I have diseases, I just worry that I might come down with one. I don't race to doctors for tests and reassurance, I actually become very anxious when I do go in.

So, it was a HUGE deal for me to find a new GP, and to go in for a complete physical. I forced myself. My anxiety was ramped up for a month, my mind swirled with "what if's" over everything from my blood pressure, to the sound of my heart, the size of my spleen and every element of the lab work that I knew would be ordered.

I made myself do this because I have decided that I'm ready for total change, ready to leave that stupid, ridiculous, crushing health anxiety behind. I wanted to hear that I was healthy, and I wanted to start a relationship with a physician that I felt I could go to and ask questions of, instead of sitting at home worrying and wondering.

In addition to the appointment, I got serious about exercise, committing to work hard every single day because exercise helps with anxiety. Because of an insurance change, I was not able to see my therapist anymore, so I found wonderful anxiety and cognitive-behavioral resources online. I read a CBT self-help book. I worked on the relaxation exercises, did deep breathing, took long walks in the fresh air almost nightly. I found time to write, to get my feelings out, to focus on something non-health related.

I did everything that I could to push through and conquer the worry!

My check-up came and went. It was a good appointment. Nothing too big. I explained my anxiety to the doctor. She was said that instead of sending my lab results home in the mail, she would just call me with the results. That way, I wouldn't obsess over the numbers, which I told her I did in the past.

She was out of the office for the second half of last week, and said she would call me with the results on Monday. (I think they have an in-office lab, so reports come back quickly). I did everything right. In those five days, every time I felt my anxiety rise, every time I had a "what if" fear, I'd stop and re-direct my attention. I kept busy, I prayed, I asked the universe for normal test results. I visualized her phone call in a positive way.

Monday morning came and went with no call. My doctor said that I should call the office if I didn't hear from her by 2:00. So I did, left a message like she asked. She called back about an hour and a half later. Everything was fine, I just needed more vitamin D. Oh...and one more thing......

She said that it was so small, she wasn't even going to mention it to me. (SO WHY DID SHE END UP MENTIONING IT TO ME!?) She said that my white blood cell count was just the slightest bit high because of my neutrophils. Normal range is up to 10 in her lab. My count was 10.8

The panic that I was already feeling from the call call alone, rose to sky-high. I understand that an elevated WBC is a very common finding, and that it can be caused by a small cold or burns or inflammation or even exercise, stress and anxiety! I also know that a lot of people's "normal" lies a bit outside of range. I've been having stress and great anxiety leading up to the appointment, and I'd been exercising a lot, and my stomach had been upset, so I might have had a bug.....

I also had the same, slightly elevated WBC about six years ago. Somehow, I got past the fear over it, but it took years. At my following check-up two or so years later, I asked my doctor to call me with the results and to just tell me if everything was ok. All was well, so I don't know if my WBC was also high or borderline there at my lest physical or not. (In some labs, the range of normal goes up to 10.8).

...... but, I want to KNOW that this is not the early beginning of something scary. Something like a blood disorder.  My doctor said that she was not concerned at all. That she would not normally have a patient come back in for this, but if I needed it for peace of mind, I could re-test  in a month. I asked her if she could tell by the other labs, because they were normal, that this was just something insignificant, not a blood disorder. She said don't worry, but she really didn't explain WHY. I feel better when I understand the why.......

I didn't want to keep my doctor long, and frankly, one of our cell phones was going in and out. I said I just wanted to do what she usually did with other patients who would have the same results as mine, so for now, I am not going back in next month.
I want to go back in and re-test for peace of mind, but truthfully, my gut is telling me that I'm FINE, that the elevation is probably from a huge amount of anxiety and stress or maybe just my "normal", and that I know I would stress for another month, and receive the same results. Hence, stressing me even more so! Like a ball of wax.

Anyway, my first reaction was panic, and then it was quickly followed by a deep deep feeling of sadness. Maybe only those with anxiety can understand.  I was SOOOOOO hopeful and excited and ready to hear good news, so that I could just move on and live without worry.

I know that most people would not give a slightly out of range result a second thought. Especially when   their doctor said don't worry and don't come back in. When you have anxiety though, uncertainty, even a sliver of it can be so upsetting. So hard.... :(

Well, thanks for letting me get this off my chest. I feel better.  I realized that I need to just go with it. I'll get my records from my old physician sent to the new one to establish a history. I  might also call a very sweet sweet doctor of mine. He's a cardiologist that I went to a couple of times to be checked for two specific heart defects that run in the family. Luckily found out that I did not have them!  Anyway, this doctor took a special interest in me because he noticed that I was dealing with a lot of anxiety. I visit him a couple times a year to just check in. It's so incredibly nice to have a doctor to see where I don't feel scared and I can ask any question without  thinking that I sound silly. He always said to call with any questions that might be on my mind, rather than sitting at home worrying. I think I might finally take him up on it.

Also, I'm not going to give up on all of the hard work and focus that I've been putting out there to get over the anxiety! I was crying and feeling depressed earlier in the evening, but after two nice friends just happen to call, I started to feel better. Thanks Kel!  I even made myself go out on my nightly walk. It was good.

And I have to also note that I am SUPER grateful that all of my other tests came out just fine! I'm so happy and thankful for that.

I'm sorry friends, if I'm been a little distant lately, anxiety is really hard on a person. It makes you feel exhausted. Sometimes staying near home with a good routine, is the best way to muddle through.

Here is a book that I highly recommend. It's called "Comfortable With Uncertainty: 108 Teachings on Cultivating Fearlessness and Compasion" by Pema Chodron.  Buddhist teachings that are both beautiful and helpful in the face of worry. You don't need to be Buddhist to benefit from this book, its for everyone!

So, I'll just take it day by day. Next week I have my annual. Then I need to see the eye doctor and then my dentist appointment after that. I will MARCH ON! I won't give up.

And, I will leave you with some Hector pictures. Because Hector the zen cat makes everybody happier. 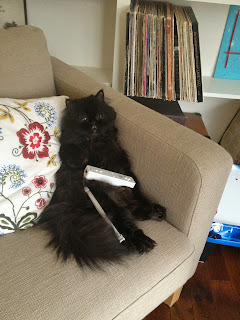 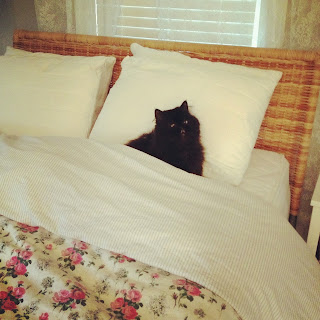 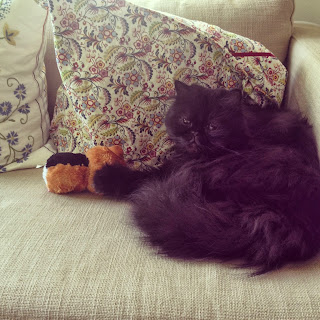 Playing with a red string and going crazy Hector. 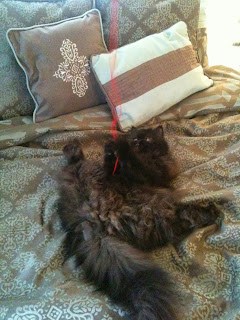 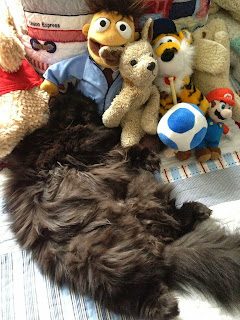 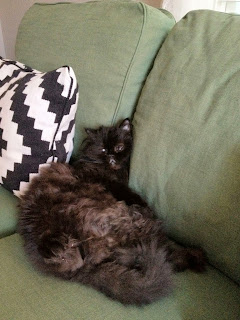 It's hard living with anxiety Lolo. I was just recently diagnosed with two rare-ish conditions that scare me. But you have to live moment to moment, which doesn't leave room in your headspace for 'what ifs' because you are focusing on the 'what IS' We aren't promised health but you are doing everything you can to be healthy, so you have to let the rest go.

So well said. Your comment touched me, thank you for taking the time to write. I'm so sorry about your two conditions, and I hope that you're feeling well. I'll take your words and move forward with them. Thank you so much. I love your suggestion to turn the "what ifs" into "what IS". I love it! I need that on a tee-shirt, that's brilliant!

Thank you again, your kindness in leaving this comment has made an impact.

I too struggle with anxiety. I also love the comment of turning what if's to what is! I will have to read the book you suggested. I am always looking for ways to cope with the anxiety.

Anxiety can be so so hard, can't it? I promise to post any new tips that I might come across. This is my year t beat this darn anxiety! Let's all help each other! :)

Thank you for your comment. If the anonymous person who posted the what if to what IS comment would be ok with it, I'd make up some shirts! I'd send he or she the first one! It's such a great statement. :)
xoxoxo,
Lauren