I've never been one to have "good hair".  When I was a kid it was a wild, tangly mess, like a bird's nest.  Sometimes when it would get really bad, my Mom would say jokingly: "You need to comb your hair, it looks like a Ragamuffin".  Which I totally didn't get back then and still don't, because what's a Ragamuffin? All I got was that it's this cat.
"You look like a muscular, heavy breed of cats which do not reach full maturity until approximately four years of age and has soft fur like a rabbit, no please go comb your hair"!  What?
Anyway, it seems like Noah has inherited both Jon and my slightly unruly hair. It's taken a long time for it to grow in, he was pretty bald for a while, and it's still slowly getting thicker. Must be cold living in Michigan without hair, huh?
Noah would like us not to cut his hair. He wants to grow it longer. And this is fine with me, it's only that today, looking at him, I felt slightly embarrassed sending him off to school with a  mop that is starting to resemble a mini-James May.  Oh I just love myself some James May, but not on my kid's head. 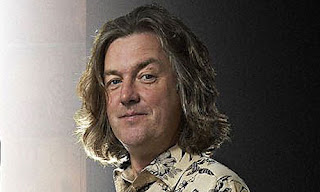 He's never had a real haircut if you can believe it. I've just trimmed it here and there.  He's due for a trim and some "shaping". It's teetering on the scary edge of Dutch Boy.

For me though, the length of his hair is not a battle worth fighting. I save all of that for getting him to eat and to bed at a decent time, and to hold my hand while crossing the street. Hair, it's just hair.
And, as you all know, I am slightly conformity-phobic! In my calculations, I would say at least 90% of all five-year-old boys have short haircuts, and with there being such little variation in available boys clothing, I'd rather him be a creative self. Following the flock, no, no, no.
It would actually be cool if he ended up like Captain Caveman. Maybe for a while. 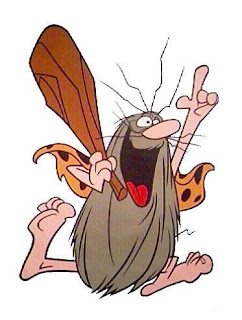 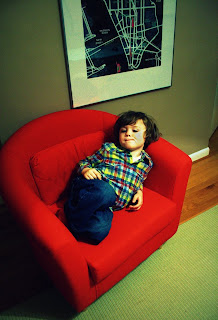 Speaking of hair, this is what I did today: 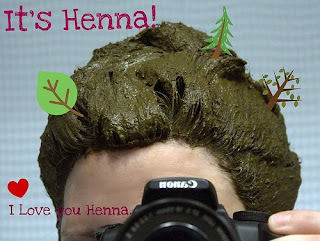 That green gunk on my hair, it's so awesome. Imagine, taking a powdered plant, mixing it with water for consistency, eggs, yogurt and olive oil for moisture, cinnamon for smell, and paprika or coffee for reddish - brown highlights!  Isn't that so cool !? 100% natural, no chemicals at all. You get to play with mud and smoosh it all over your head.
The bain of my existence is gray hair. Really really, seriously, you don't understand how much gray hair I have. My grandmother, and others on her side of the family, began to gray like I did, in their early twenties. Totally white by forty, and I'm sure on my way! It's really not fun. I have what I call "The skunk stripe", this two inch, solid band of white white hair along my part. I've been dying my hair for years, so most people don't know quite how bad it is.
Here's the thing, hair dye is not good for you, at all, and it finally dawned on me how terrible it is that I have been using these chemicals for such a long time. To make matters worse, I think that I have a very common allergy to one of the most prevalent and dangerous chemicals in hair dye, PPD.  Para-Phenylenediamine is found in 98% of hair dyes. It helps the colorant adhere to the hair, and it aids in staying power.
The burning eyes, the pounding headache, the burning scalp, this was the allergic reaction that I had each time I colored my hair.  I've used  "natural" hair dyes from Whole Foods for the past two years, thinking they were less harsh. What I didn't know was that while these dyes were ammonia free, they were not PPD free.
Sigh.....so I gave in and decided just to take the plunge and go gray. No, WHITE! I would be white! By the time the "skunk stripe" was two inches wide, I just couldn't take it any longer. I was too young to look so old. And, it made me FEEL really old, not to mention ugly. :(
That's when I began a bunch of research. I found a few wash-out dyes that didn't have PPD, but they contained other chemicals, nearly as bad. I wasn't willing to put those products on my head every few days.
Luckily one day,  The Lush Times came in the mail. LUSH!!! I love you Lush!!! It reminded me that henna is an option.
I was really skeptical and  decide to read a little more into henna, to see if it honestly could cover gray.
The opinions on that were mixed, but it did lead me, thankfully, to White Mountain Natural.   Oh Hai! I love youuuuuuuuuuuuuuuu!
White Mountain makes a kit of Henna called  "Color the Gray".  It's a super long, two-step process that includes dying your hair with henna, and then dying your hair with another, darker form of the plant, indigo. First your white hair turns yellow from the henna, then you layer that with a green cast indigo to make brown! The first time around my white hair looked pretty green. Oops! But then, once I did it one more time, and only with the indigo in a dark brown color, I was left with medium brown highlights. It was great! The henna lasted a good month, and the more times I henna, the better the results. Henna doesn't penetrate the hair shaft, it lays on top. So, imagine adding sheer layers of color.
Ok, so listen to the best part. The BEST part is that henna is also known as an amazing conditioner. You guys, you guys, it's incredible! I am a poor girl with thick, curly, frizzy coarse hair. When I use the henna, my hair becomes smooth and super super soft and manageable for a long time. It's incredible. I also get a lot more body. I have no idea, but it works, light years beyond any conditioner or treatment I have ever tried. It's truly great. You should try it! Henna comes in many colors, including a neutral if you just want conditioning without color. Have fun!
One last thing on the Henna. I imagine that the box hasn't changed in a while, because it looks like this: 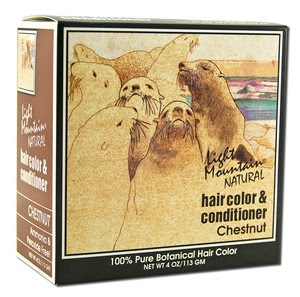 I wanna see the end result...take another pic, please! Love you...

My boys have relatively short haircuts. Travis' is curly and coarse and VERY rats' nestish if left to its own devices (which is 99.99999% of the time), but he is starting to grow it some. Tyler's is typically a cut around his ears and along his neck - he got the straight baby-fine hair of his mama.

Ours is a comfort-thing, though. Their heads turn to one big sea of sweat by 7:30 a.m. in the summertime if their hair is too thick/long. Texas isn't the place for longish hair - mainly out of survival!

Just wanted to say...that a skunk stripe can be very becoming. Just think of Stacy London on TLC's What Not To Wear, she rocks her stripe! :o)

Lauren-I nominated your blog for an award. Check my blog for details and pass it on! :o)