Because when you think outside of the box, it has the potential to be no less than AWESOME.

When little boys spend all day playing and crawling around on the floor, as they often tend to do, their poor pants suffer. Especially the knees. Noah's been asking for a new pair of yoga pants for a while because he wore the old ones out pretty badly. So, being that he could use a new pair anyway, I said ok and went over to Target this afternoon. The basic black and brown pants from last time were nowhere to be found, but I picked up this awesome pair in the girl's department. The perfect primary green shade (his favorite color), and just the right amount of boot cut. I think they kind of look like mid-1970's boy pants. I was thinking to myself, why is there such a taboo about shopping in the department of another gender? Colors aren't gender specific. Fabrics are gender specific! The world is our rainbow. It's just too narrow sometimes. 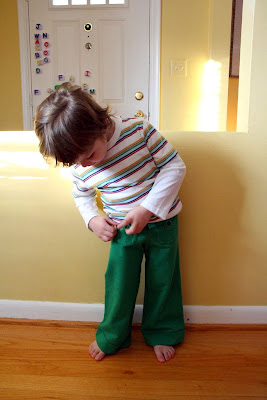 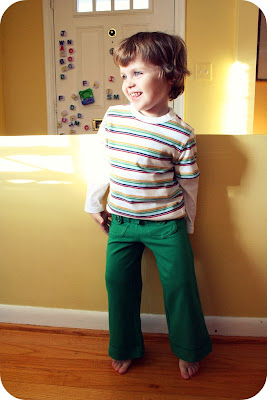 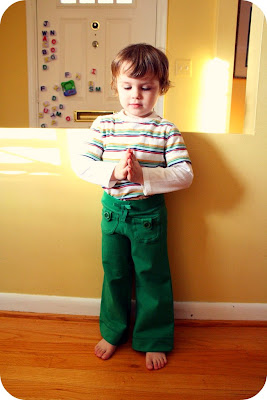 Hello there my friend! I found your blog very interesting so I have added your link in my Blogroll. I hope you'll link me back. Have a nice day! http://hapiblogging.blogspot.com/

Yep, yep! Cute pants. :)
I have bought clothes from the "boys" sections for both girls from time to time. When I was looking for polo shirts for Caitlin (when we thought her school allowed them), I found the best color assortment in the boys' section. Also, at Halloween time, I was looking for red sweat pants and found a pair, in Cara's size in the toddler boys' section. A lot of clothing is gender neutral, for sure. That explains why I love Ben's t-shirts so much! LoL

Hi! Care to x-link? I have added you already in my list. Have a nice day! http://carlos-ideas.blogspot.com