Noah had a week and a half long spring break. Jon was home for a big chunk of it. He had to go into the office at one point to pick something up. We waited until the end of the day and took Josie along. Then we released her and she went RUNNING!!! I think it was pretty cool for a puppy to have the run of a large, empty office. 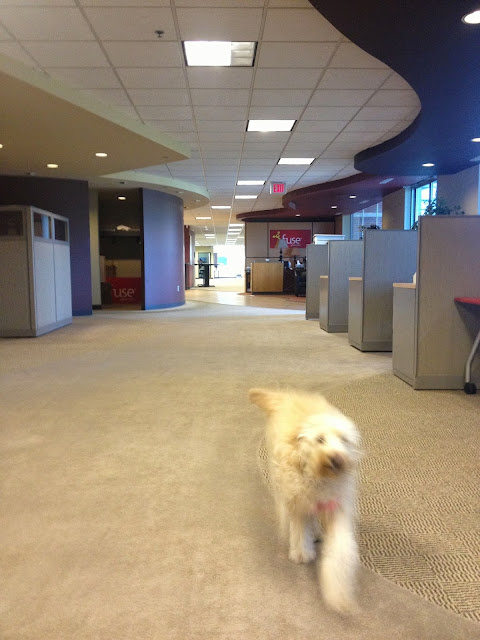 One of the most fun parts of April is that we weather began to warm up and I was finally able to put the top down on my car! :) I've waited patiently since getting my car in January to be able to try it out. I've decided that it's so much fun, but I'm still a little unsure as to if I am a "convertible person" or not.  It makes me feel a bit self conscious for some reason. At least though, Noah and Josie love it!!! 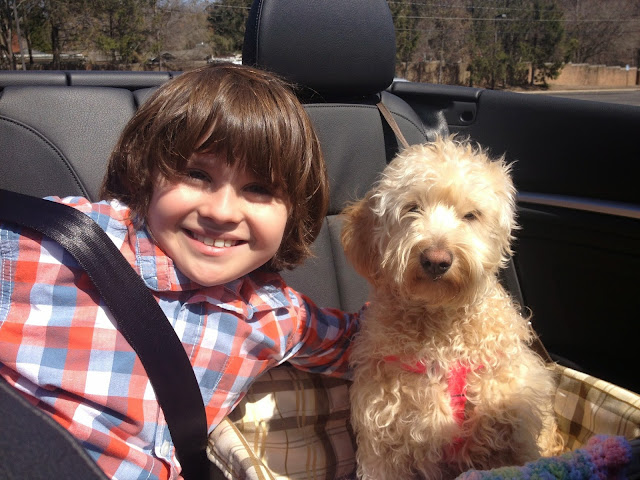 For the record, Noah is in a booster seat and Joise is in a dog car seat that hooks to the car. Then she is wearing a harness that latches into the car seat. I don't go far in this car, just around town. When I take her, Josie closes her eyes and points her head towards the sunshine and sniffs the air. Then she lays down in her car seat and takes a nap I think she really enjoys the sun on her face and the wind in her hair!. :) 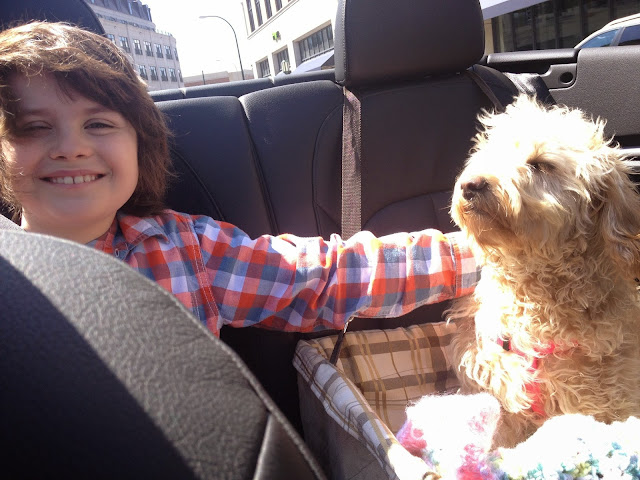 Unrelated, but I wanted to include it. as part of April..... After coming across a photo of myself as a baby (right), Jon said that he felt that he remembered a similar picture of Noah, and sure enough, we both had a yellow exersaucer! :) 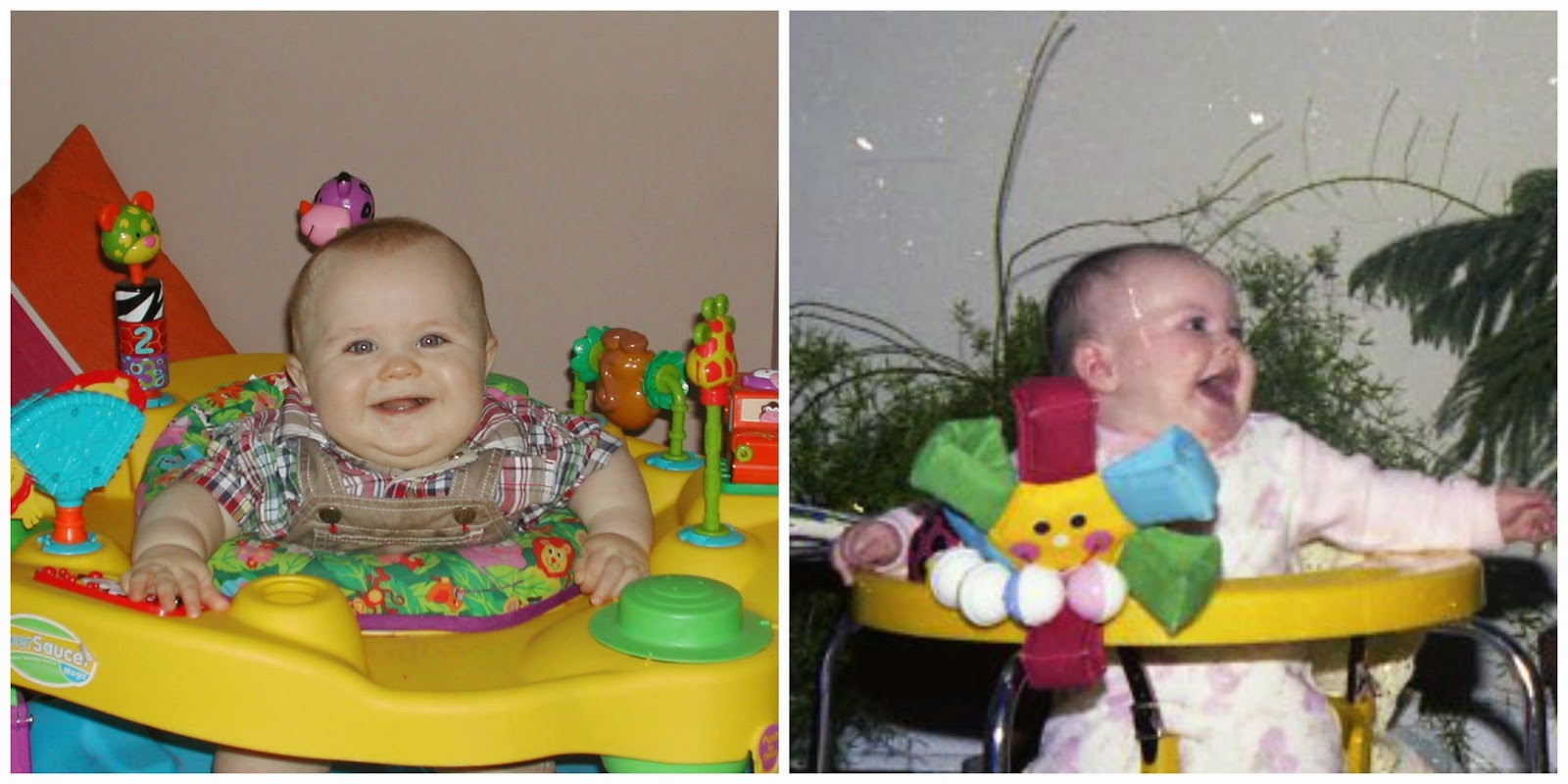 Maybe the biggest news in April is the arrival of my new brother, TOBY!!! My Mom adopted Toby, he's an Airedale puppy. My mother has had Airedales for 41 years. Can you believe that!? Toby is extra cute and very sweet. He seems like such a good puppy, even sleeping through the night at just 8 weeks. (I wish my TEN MONTH old puppy would do that too). Hint! Hint Josie! 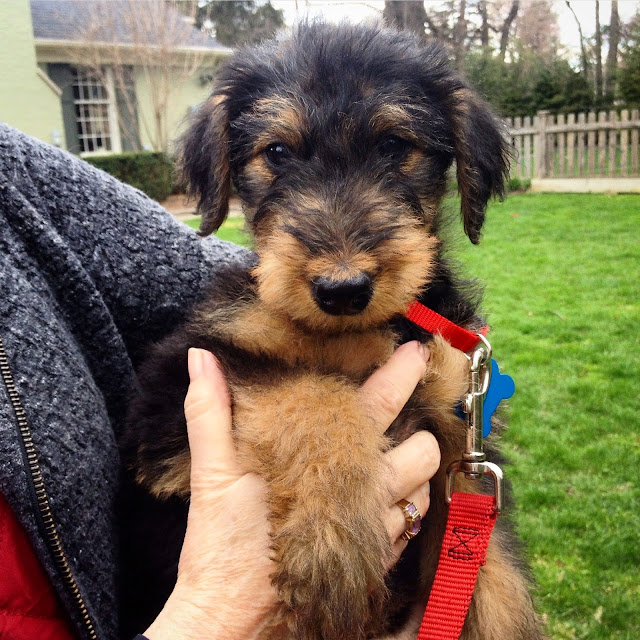 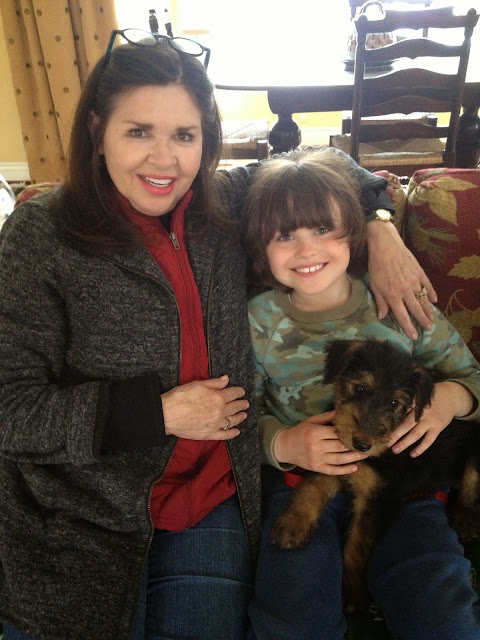 Josie is a little unsure of Toby. (He has sharp puppy teeth). I don't think she knows what to make of him. The problem is, she's SUPER submissive and lays down whenever he's around, so Toby takes full advantage to jump on her and chew. 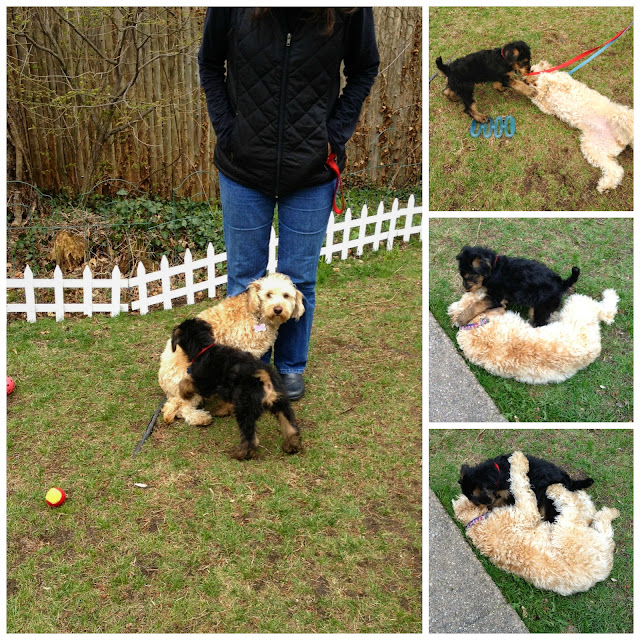 Speaking of Josie, AGAIN. I made this motivational poster. 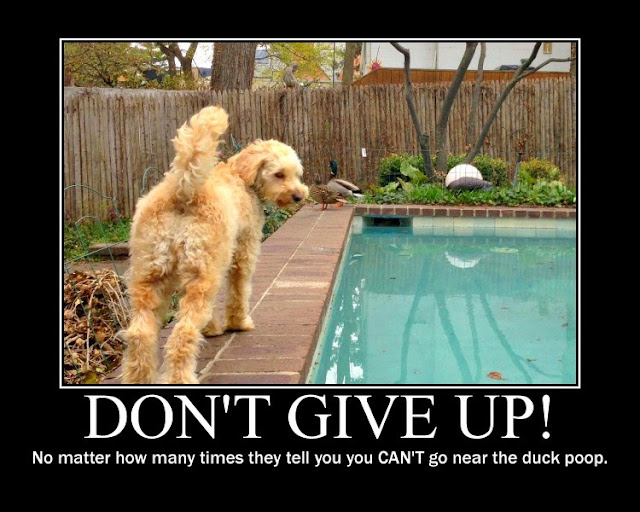 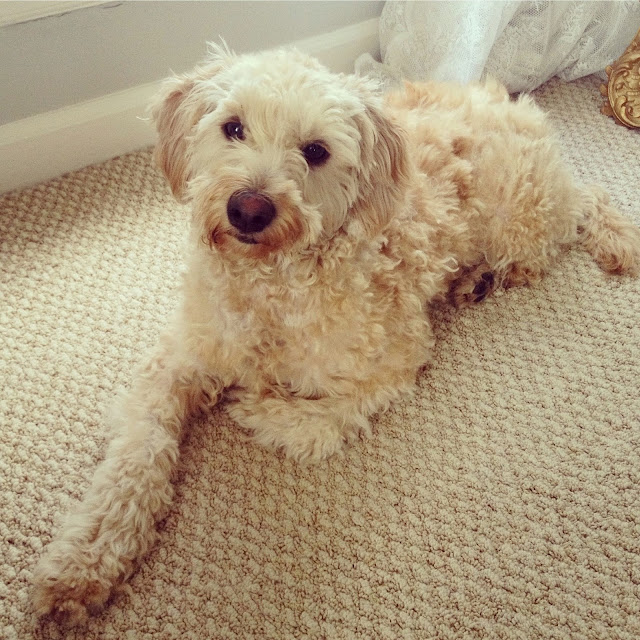 And here she is taking her evening stroll at the park in the center of town. She comes to the promenade to sit and talk and stare at people. 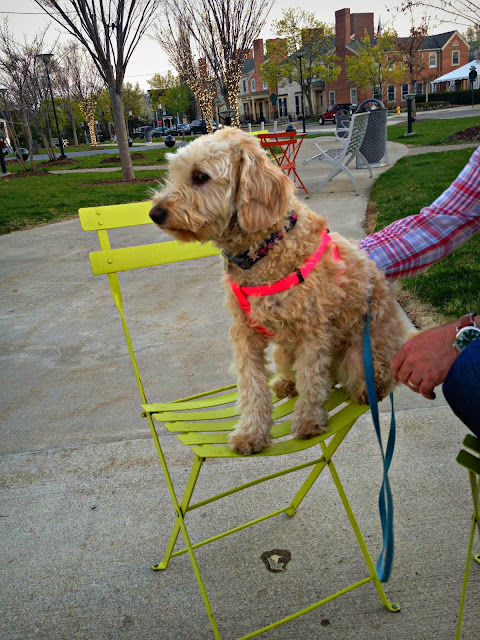 I can't remember why I loaded this outfit picture into this post, but yeah, spring! 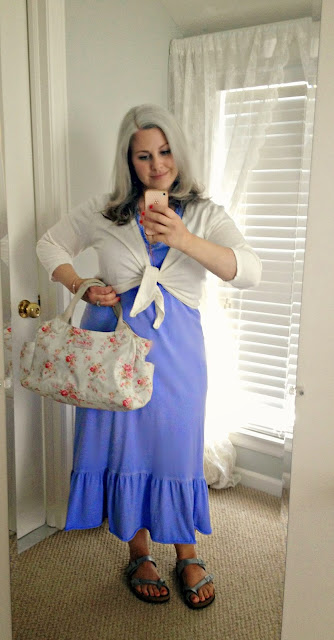 And last but not least, Jon took this picture of Noah and I at dinner the other night. I just thought it was nice. There aren't many candids on here. Jon said that Noah and I are on the same "wavelength" and I have too agree. 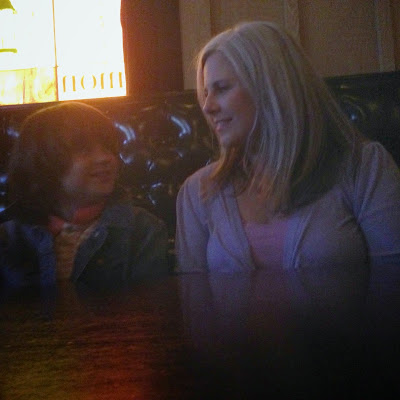 Oh wait, one more picture.... tonight Noah is performing in his first musical! His school's 4th and 5th grade is putting on Gilbert and Sullivan's "The Pirates of Penzance!" I saw one performance last night and the kids were AMAZING!!! There are two casts, one performed twice yesterday and Noah's cast will perform twice today. I have to tell you, the kids were just incredible. When I was in 4th or 5th grade, we did Alice in Wonderland and I think nursery rhymes as our plays. These children though, they basically  spoke in old English for 90 minutes! I was impressed. Noah has one of the lead parts, he is Frederick. My favorite line of his is "But dear Major general, the stucco upon the Baronial hall has scarcely dried!" What the heck does that even mean!?

I made some "buckles" for Noah's shoes as part of his costume. It's was fun. I can't wait for tonight, we're all so proud of him. :) 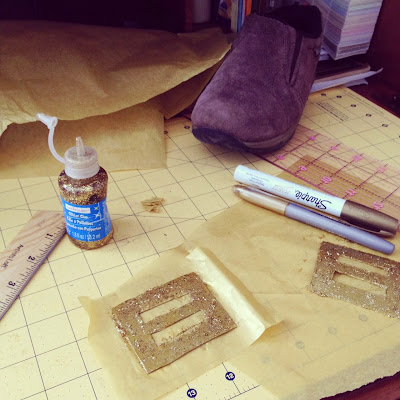 And one final note....GUESS WHAT!? I CUT MY HAIR!!!!  I can not even believe it!!!!!!
I was long, long overdue for a trim. My ends were so dry and discolored. It was WONDERFUL to finally go in and see my stylist Lydia. It felt great to have my hair glazed and to get all the unhealthy bits off.  I've been gong back and forth back and forth as to whether or not to cut my hair. I love long hair, but my texture is so unruly and nothing but hot and puffy and frizzy in the summer. So, after changing my mind ten time, I finally too the leap and went for the chop! :)

This is the haircut inspiration that I brought with me to see Lydia. 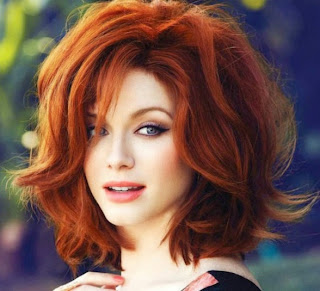 Isn't that hair cut wonderful!? Well, after the fact, I have to say that I LOVE MY HAIR!!! Thank you, thank you Lydia! It's 100 times healthier and so soft and bright, and the short length has been WONDERFUL in the past two days of 85 degree temps. WOO HOO! So glad.

Between Jon traveling and Noah getting ready for the play, I just haven't been able to get good pictures of my new hair cut, but I promise to try to style it and take some pics soon to share.

Until next time, enjoy your weekend everyone!
xoxoxoxo,
Lauren :)

I am long overdue for a cut. I need t get the rest of the blonde highlights I had a year ago put in to grow my hair to white/grey. But my stylist had shoulder surgery and is still not back, and it's been 6 mos since I had a cut. SO, where are the pics of your cut??? I bet you like having the weight off. Josie is getting so big. Hope Jonah's play went well. Look forward to seeing a pic of him in his costume maybe? Great pics of you and Jonah as a baby and then the one that Jon took. Can't wait to see your hair! Molly

Thanks so much! It is WONDERFUL having all of that hair cut off. It was feeling so heavy and the ends were dry, not to mention it's getting hot and muggy here. I hope your stylist is better soon and comes back! I feel like I'm really happy I got it cut.

I've tried to get some good pics for you guys but Jon has been out of town and I've been really busy. I snapped pics several times but the lighting was bad or my hair wasn't styled. I will try again ASAP! :)

Thanks, the play was great. I think he has a new hobby!!! Hope you're well and that your week is off to a great start Molly! <3
xoxoxox

Dying to see the new cut! I'm new to your blog--love it! I'm just starting to grow out my color--hoping I look as good as you do :)

\(^-^)/ Welcome! Welcome!!!! Thank you sooo much for reading and being excited for the cut. Ok, I'm going to do my best to get a good picture soon! I've just been so busy since I went to the salon, and then when I've had time to take pics, it was all frizzy because of hot temps and humid. That happened today. Now it's a layered, long bob. About to my shoulders. I love it so much! It feels light and airy, which is great as we get near to summer.

Thank you so much again Tina. I hope your journey is going great so far. I think you're going to love your "new you!" :)
xoxoxoxoxox