A Symphony of Starlings & How We Turned The Bagel Bounty of 2014 into Bird Feeders!

European Starlings are one of our country's most abundant birds. They travel in huge flocks, often devouring all of the bird seed in the feeders they find in just one afternoon! Amazingly, the 200 million+ starlings that we see today are descended from just 100 birds, brought to America and released in Central Park in the 1890's. They were sent into the wild by a group of Shakespeare fans who felt that the United States should, just like Europe, have every kind of bird ever mentioned in his stories. Isn't that interesting? European Starlings are also wonderful musicians. They chirp and sing and can even mimic the calls of up to twenty different species! When I went outside to my backyard yesterday, I was hit by a cacophony of sound. Layer upon layer of bird calls and melodies and noises that also had no rhyme or reason. It was a bit disorienting. I looked up, and there in the distance, a normally bare tree was blackened by a big flock of Starlings. I caught some of their music on camera, (and a clucking squirrel) but my phone could not really pick up the massiveness of the sounds. There was even more of a variety of song- some quiet, some loud.  It was very much in stereo too, such an interesting experience.


For more Starling media, take a peek at this AMAZING! INCREDIBLE! video of a murmuration, aka a flock of birds filmed in Ireland. How in the world do they pull off such flying grace!? I can't even imagine what I would feel, if I was one of the girls in this boat. Shock? Awe? Joy? Isn't life unbelievable sometimes?

Murmuration from Islands & Rivers on Vimeo.

So, I have to finish this post from yesterday quickly. Noah has been home from school today feeling a bit under the weather. We've been spending time together all day, so I haven't had  chance to write. I have about 30 minutes until I need to start dinner, so I thought I'd attempt the rest of the post now!

I have to admit something. I feel so much pressure to write here regularly, and I don't even know why! Every day I think: "Oh, I really need to find time to write." Is this normal? I used to not stress about it, but now I do. I fill every ounce of free time with the blog now. Day, night, weekday, weekend. I think I am heading for burnout. I need some more balance. I'm going to read up on how other bloggers figure out a good writing schedule!

I wasn't able to finish this post before dinner like I had wanted. Then last night there were things to get done, and now poor Noah is still feeling a little sick and stayed home again.  Piggy-backing on what I talked about above, the pressure I put on myself these days to get posts out is kind of stressing me. So, if at anytime in the future you don't hear from me for a bit, no worries. I'm probably just off being busy with regular life or something. My goal is to post regularly, but in an organic way, not a forced way.

Last week Noah had a pajama day at school. All of the kids wore pajamas and you could bring in your favorite stuffed animal. Each classroom served a different themed breakfast and the kids were able to rotate through, choosing what they wanted to eat. Kind of like one, giant buffet! One of the requests made by the children in Noah's classroom was for bagels and cream cheese, so I signed up. Jon and Noah picked up a couple dozen bagels and some cream cheese on the way to school. In retrospect, I was so stupid not to think to send in a platter for the bagels! Ugh! These are the kinds of things that I am specifically supposed to think of!

Instead, the kids and teachers were forced to dig through a large bag of assorted bagels to find the kind that they wanted. If you know kids, you know that each child must have done quite a bit of digging around. And if you know kids, you'll know that right now, stomach flu and regular flu is really circulating.

So when I came to pick Noah up at the end of the day, we were handed a big bag of leftover bagels. There were actually quite a few, but it's hard to compete with the hot breakfast items that morning, like sausage and egg casserole. At first I was all excited to be bringing home some bagels that we could eat over the weekend, but then it dawned on me, after seeing a couple kids dig through the bag once again before we left, oh man, this is a bag of carbs and germs!

Do you know.....DO YOU KNOW that it only takes 18 Norovirus particles to make one sick!?    Look, as somebody who was very ill from Noro this winter, I DO NOT even want to risk getting it again. So in my head, as I was leaving, I was like: "Arrrrrgghhhhhhhhh bag of edible Noro!!!" I was poised to yell: "STOP!" as soon as Noah went to reach for a bagel on the way home. I was hoping he wouldn't ask, so I wouldn't have to deny him, let alone bring up a reason why.

Luckily for me, it didn't get to that point because just as we cleared the classroom door, he said: "Mom! Mom! Don't eat those bagels! Kids have been going through them all day, and nobody washes their hands!" Phew! Saved!

Now, you can look at this situation in a number of ways. I wouldn't call Noah and I "overly afraid" or "overly worried" as some people so annoyingly love to joke. I just think that we're rational, responsible and cautious at times when it's prudent. I really wouldn't think too much of a bag of bagels in July, when stomach flu isn't going around. It's situational.

My Mom said in the 1980's when Ronald Reagan did another push for the "Buck Up for Safety"campaign, six-year-old me got pretty hardcore. Apparently I was really annoying and would demand that everybody in any car that I rode in had to buckle up. I also made repeated reminders about the importance of seat belts. I was on it! My persistence and respect for seat belt laws were legendary. Yet another example of being reasonably prudent and concerned, not crazy.


I came home with the giant bag and when seeing all of these unwanted bagels, Jon felt kind of like this........ 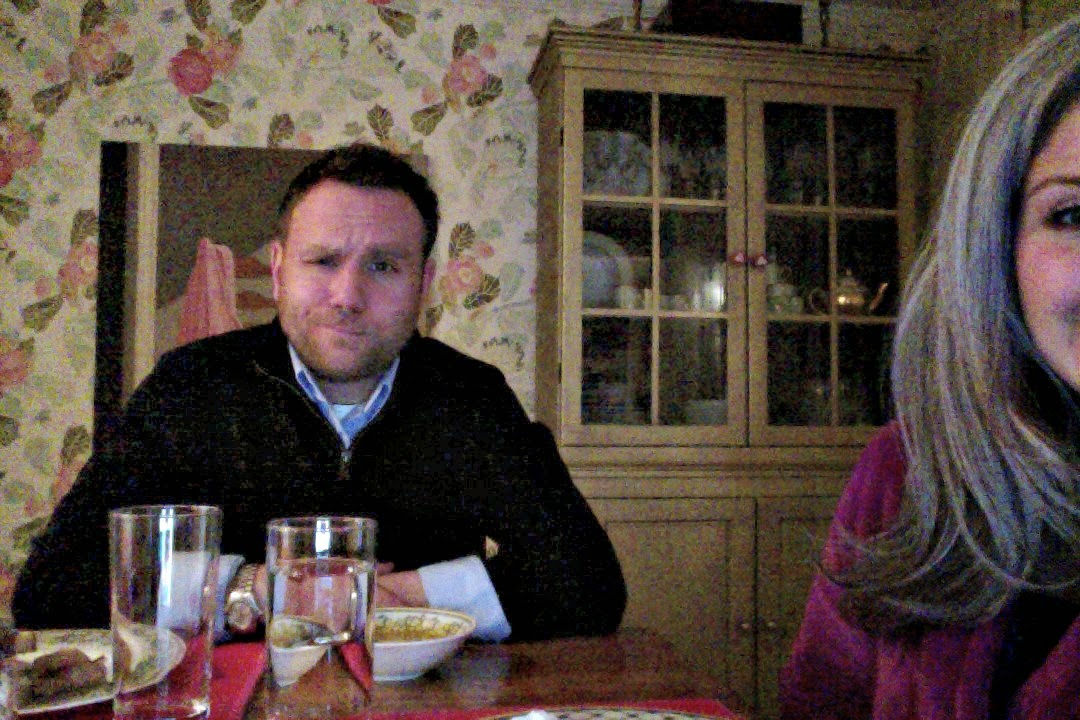 But after I attempted to take a stupid selfie with the giant bag of bagels, he looked like this......... 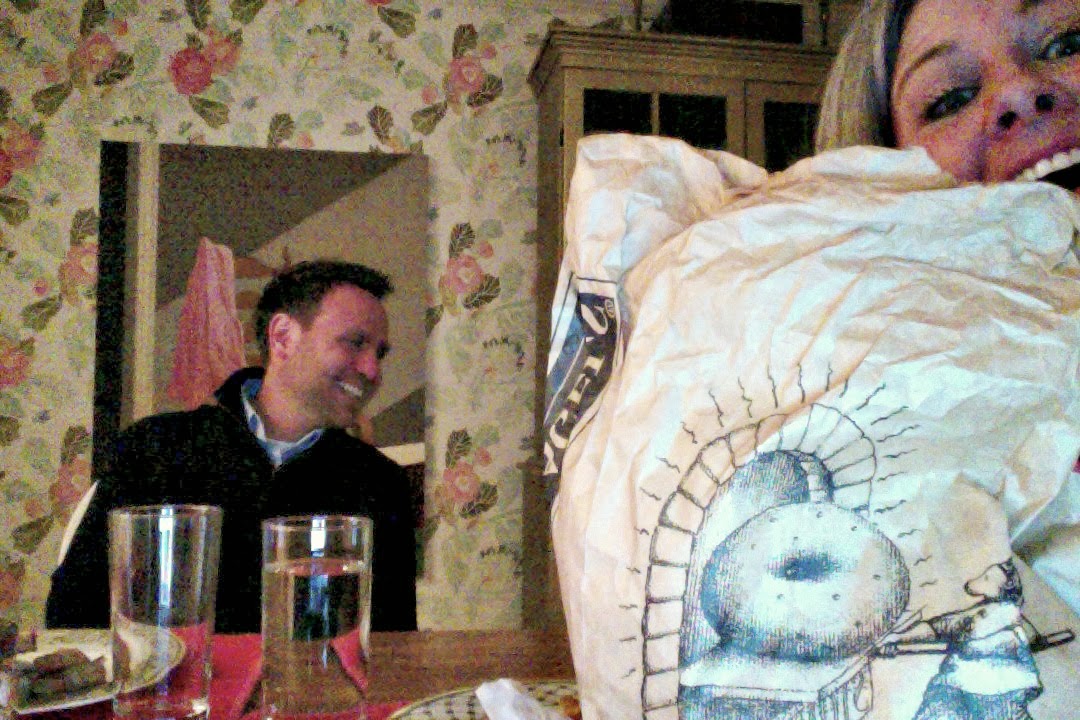 Alright, here's what you do with old and/or germy bagels to make bird feeders.

1.) Get together everything that you need: bagels, peanut butter - (salt free, as natural as you can find), some birdseed, a bit of yarn, some scissors, and a butter knife. Oh, and you'll want a paper bag as a work surface and probably some tin foil. 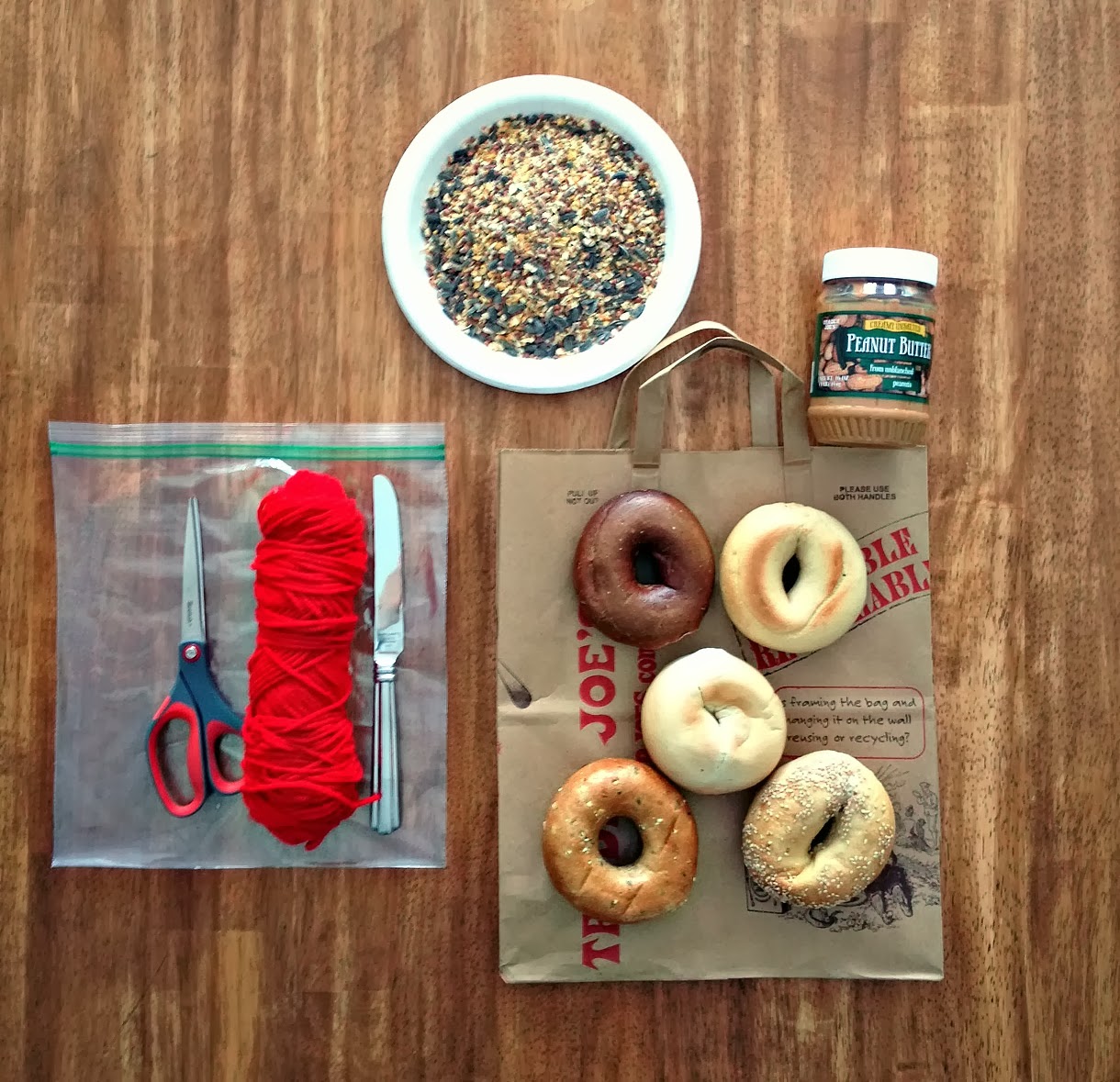 2.) Cut pieces of yarn long enough to thread through the bagels. Tie a secure knot at the top of each, and leave the two ends of the yarn untied. You'll be tying them to the trees later. You can adjust their length then and snip off any unwanted ends. 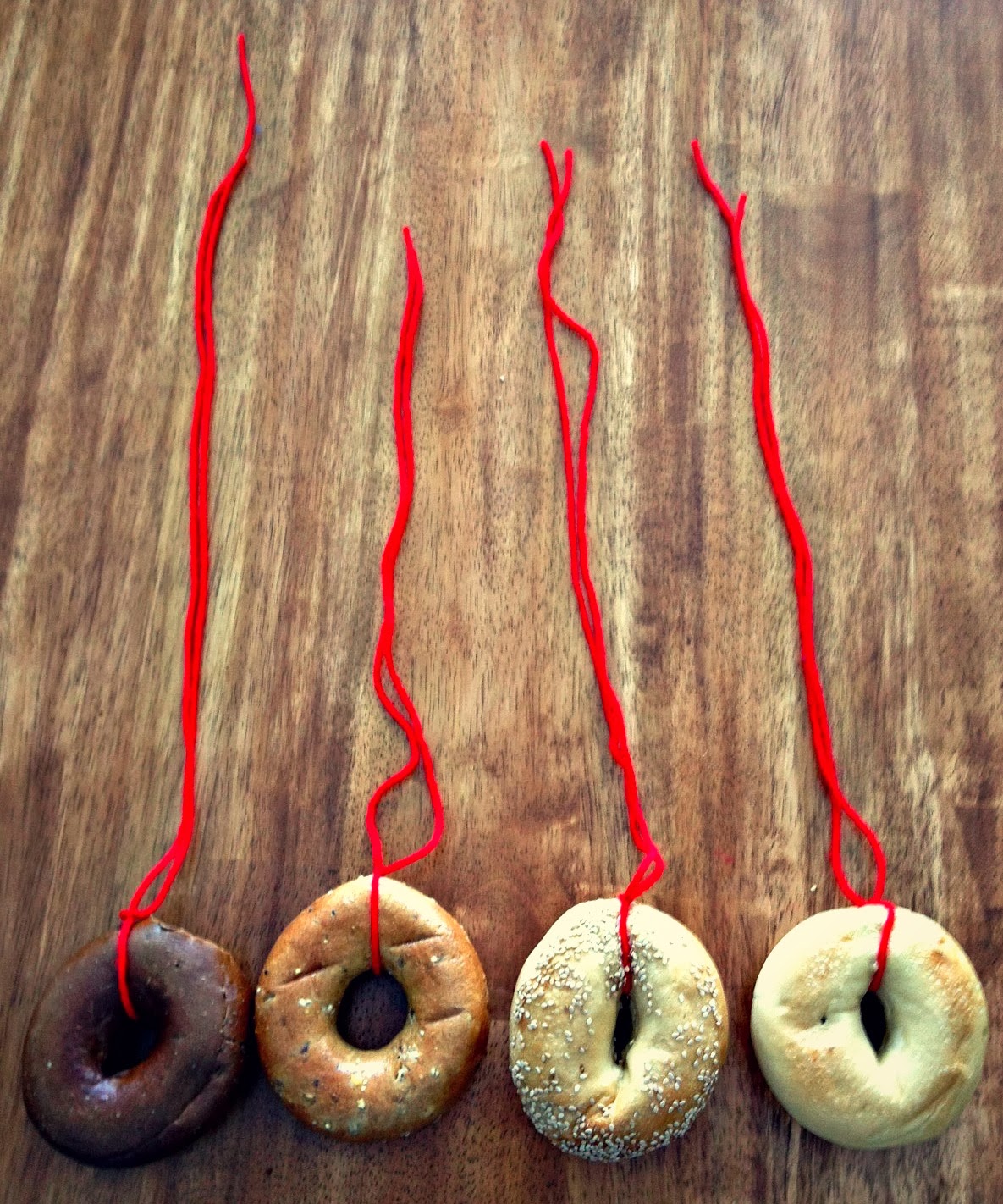 3.) After that, spread your peanut butter on one side of your first bagel, dip in bird seed, flip your bagel and repeat! I found that it took a little practice and extra birdseed to real get everything covered with both peanut butter and seeds. It's a messy DIY, but have fun with it. Clean up is easy! 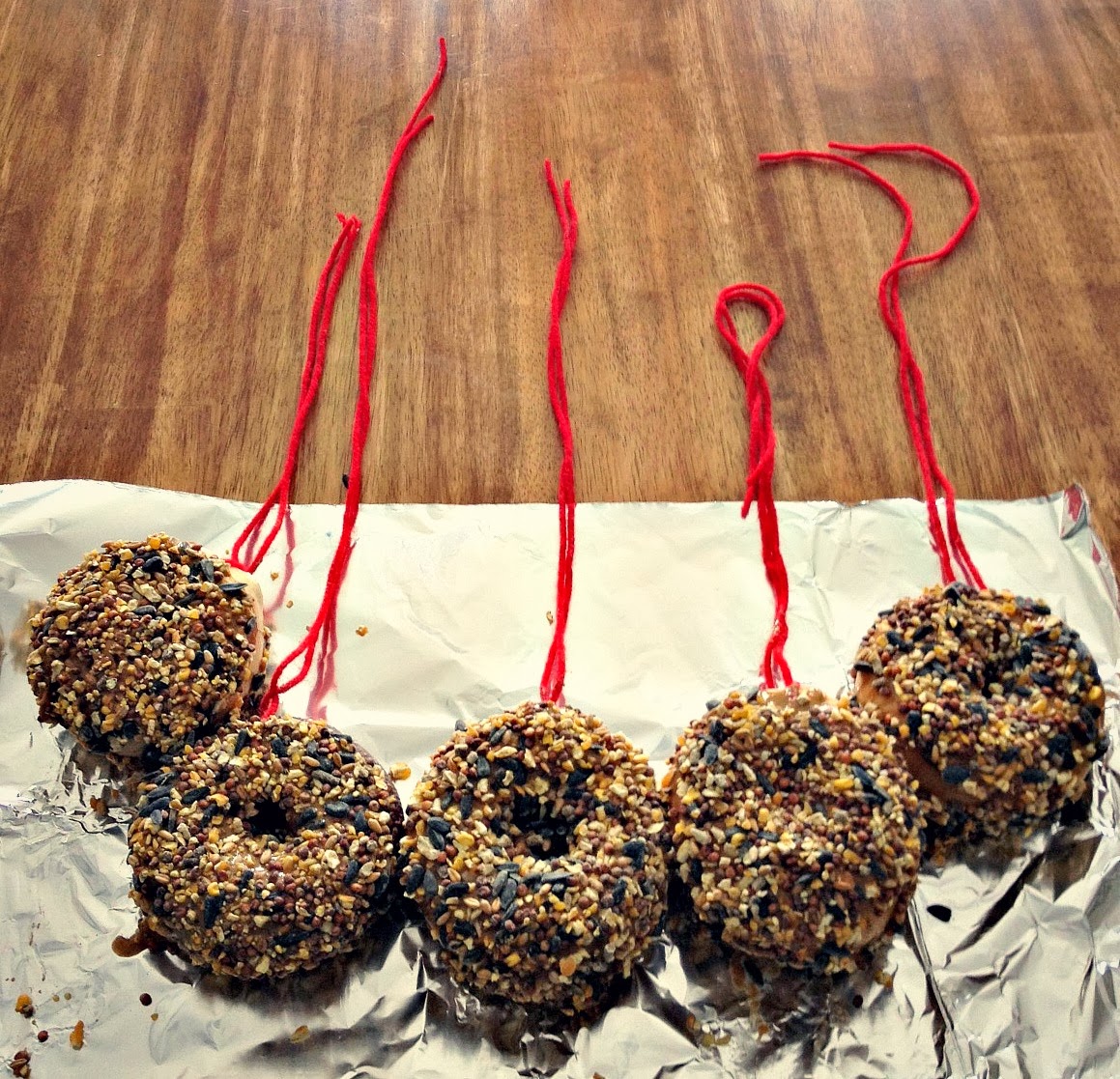 4.) I laid my bagels on tin foil and then carefully carried the whole thing outside to hang them in the trees. You might want to slide some cardboard or a baking sheet under the tin foil first. That would have made for easier transfer outside. 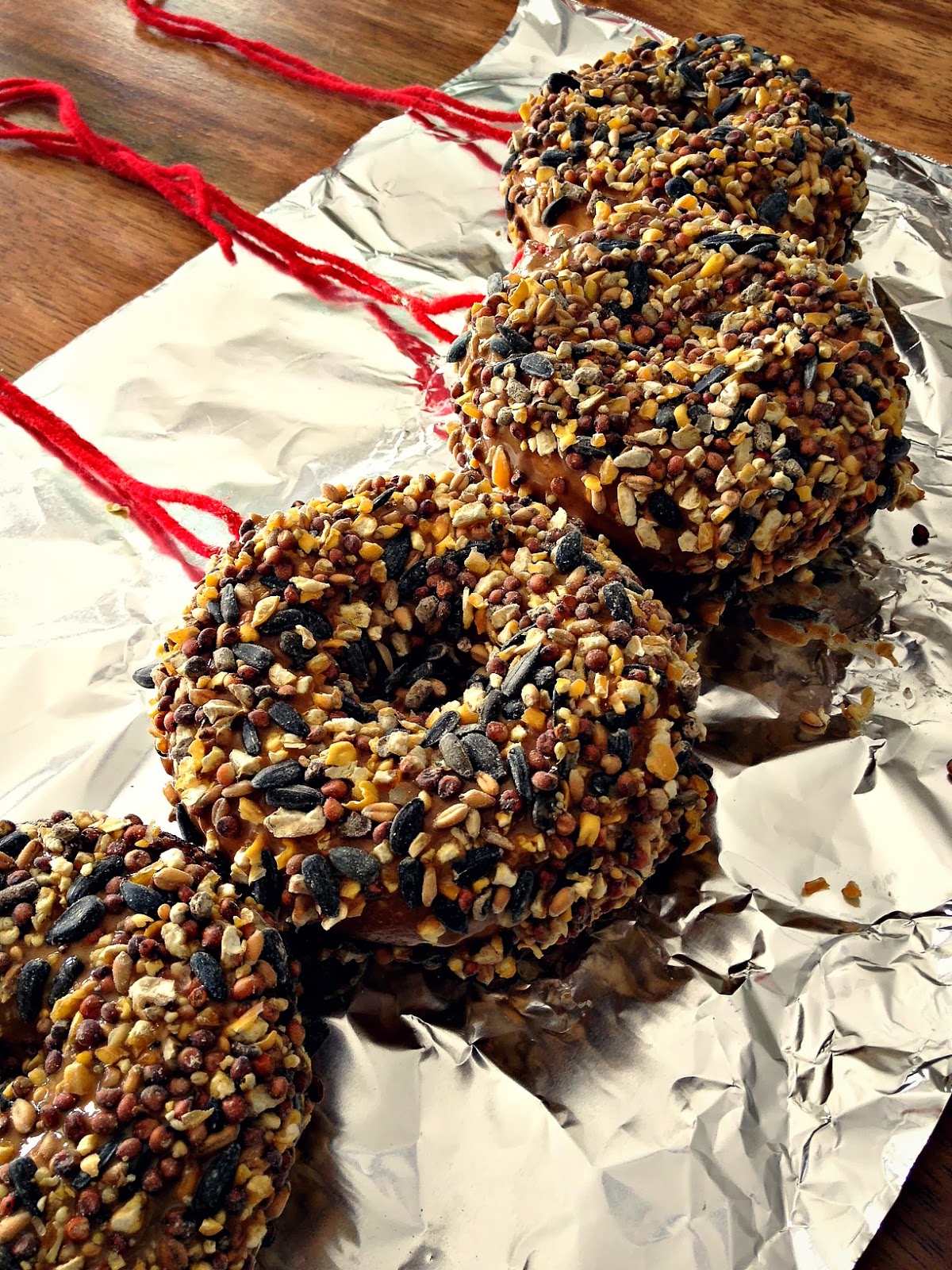 5.) You're done! Just tie your bagels to any old tree or bush or pergola. 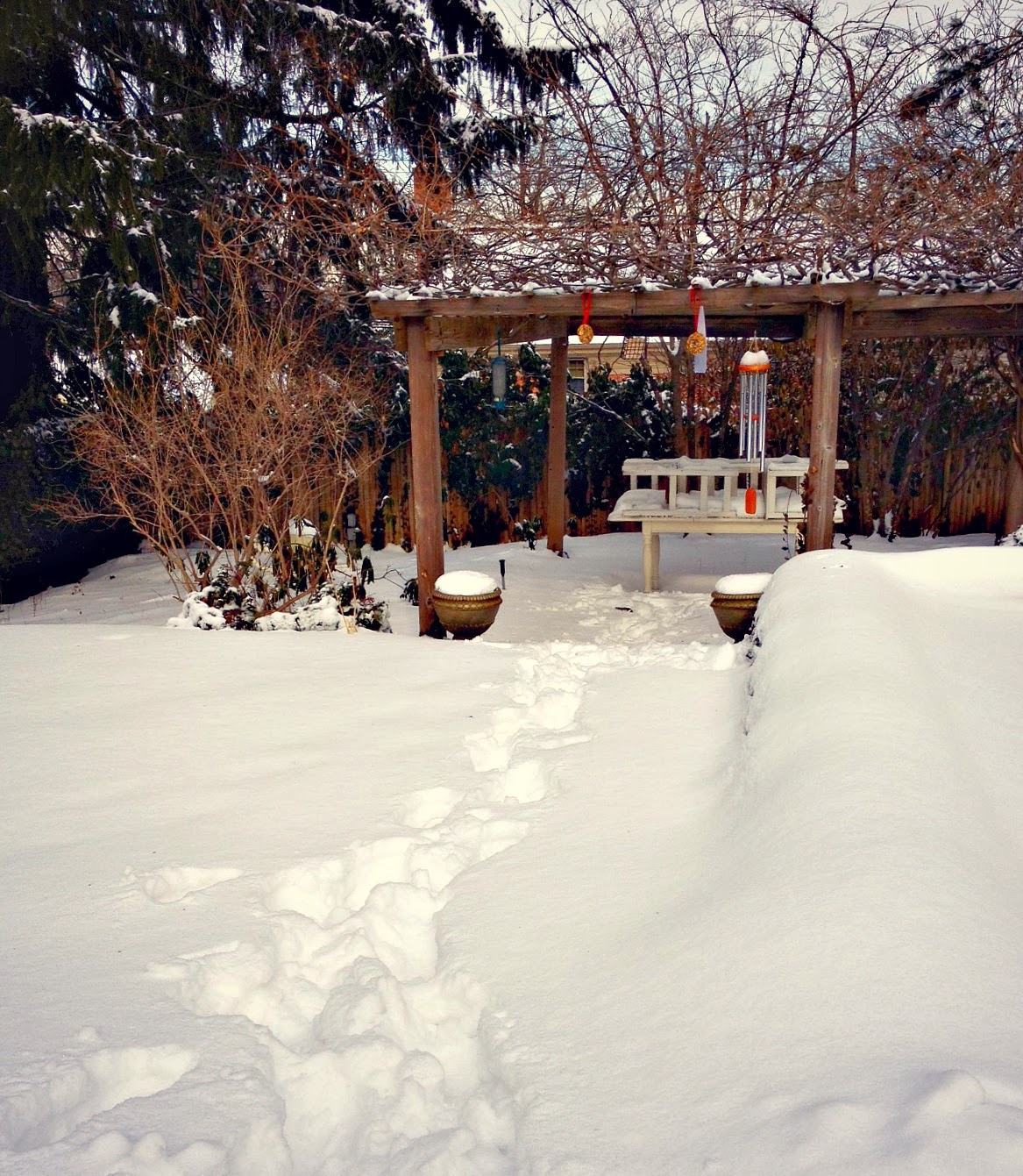 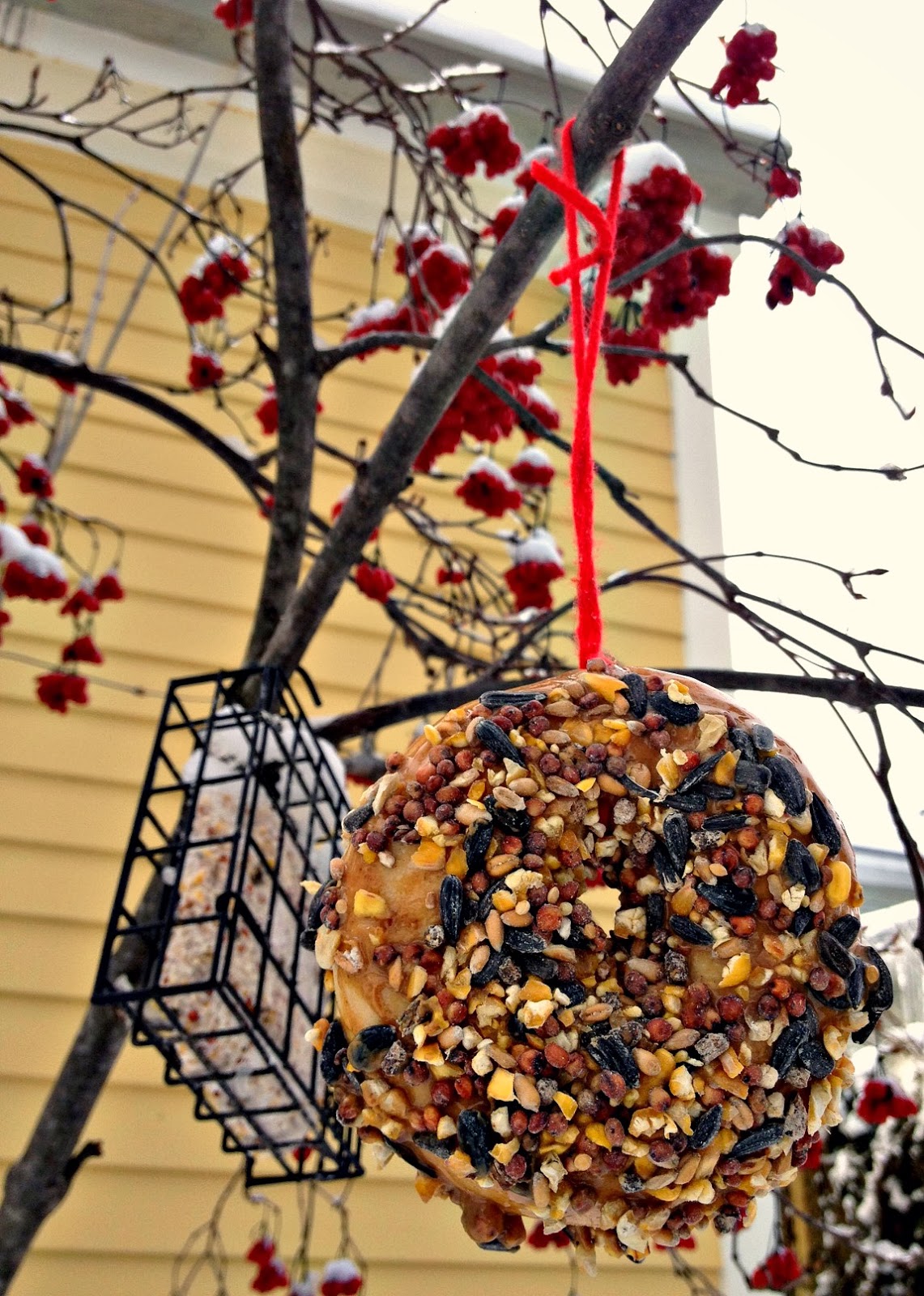 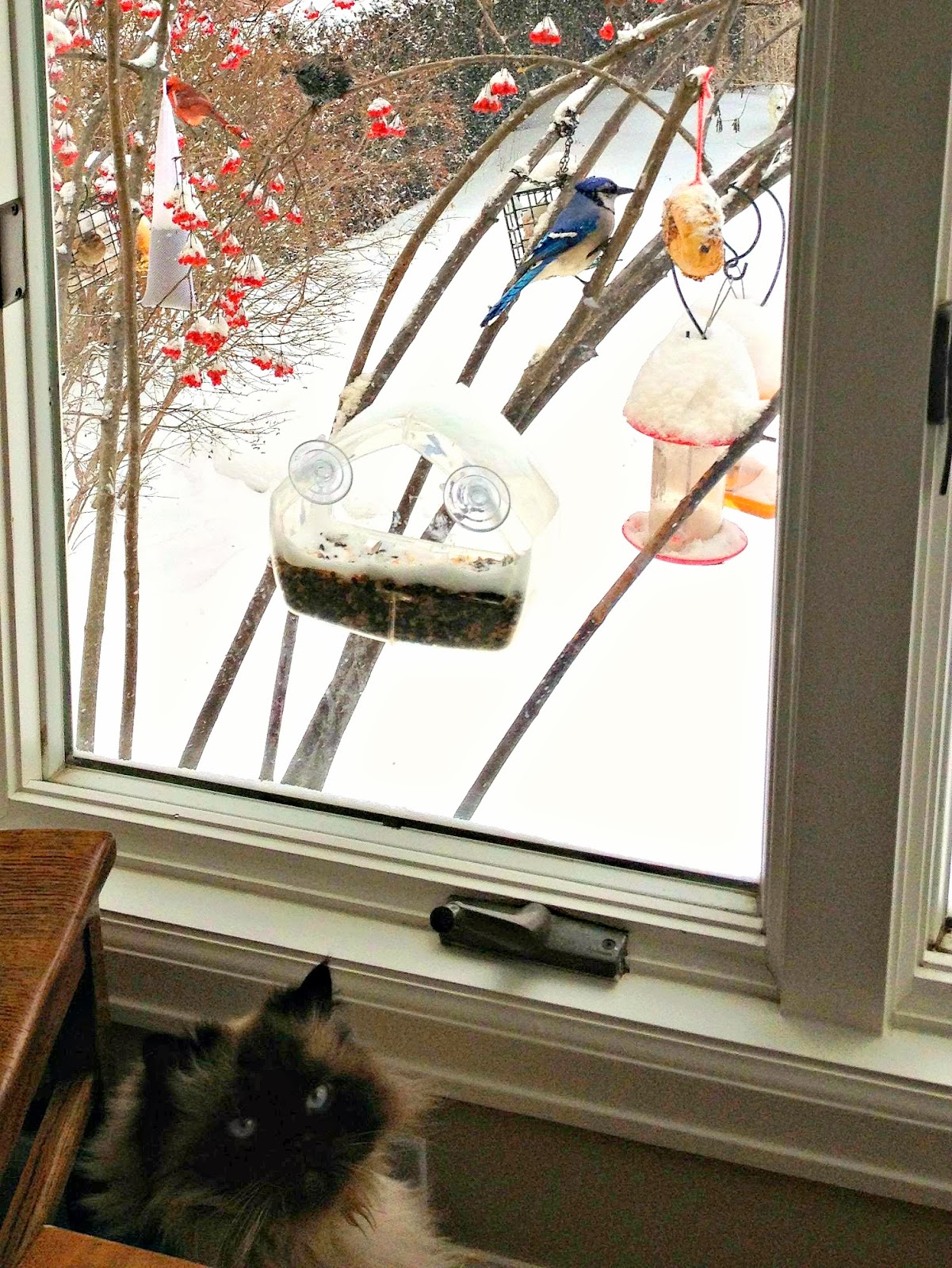 I really like this picture of Willow and some Cardinals and a sparrow. 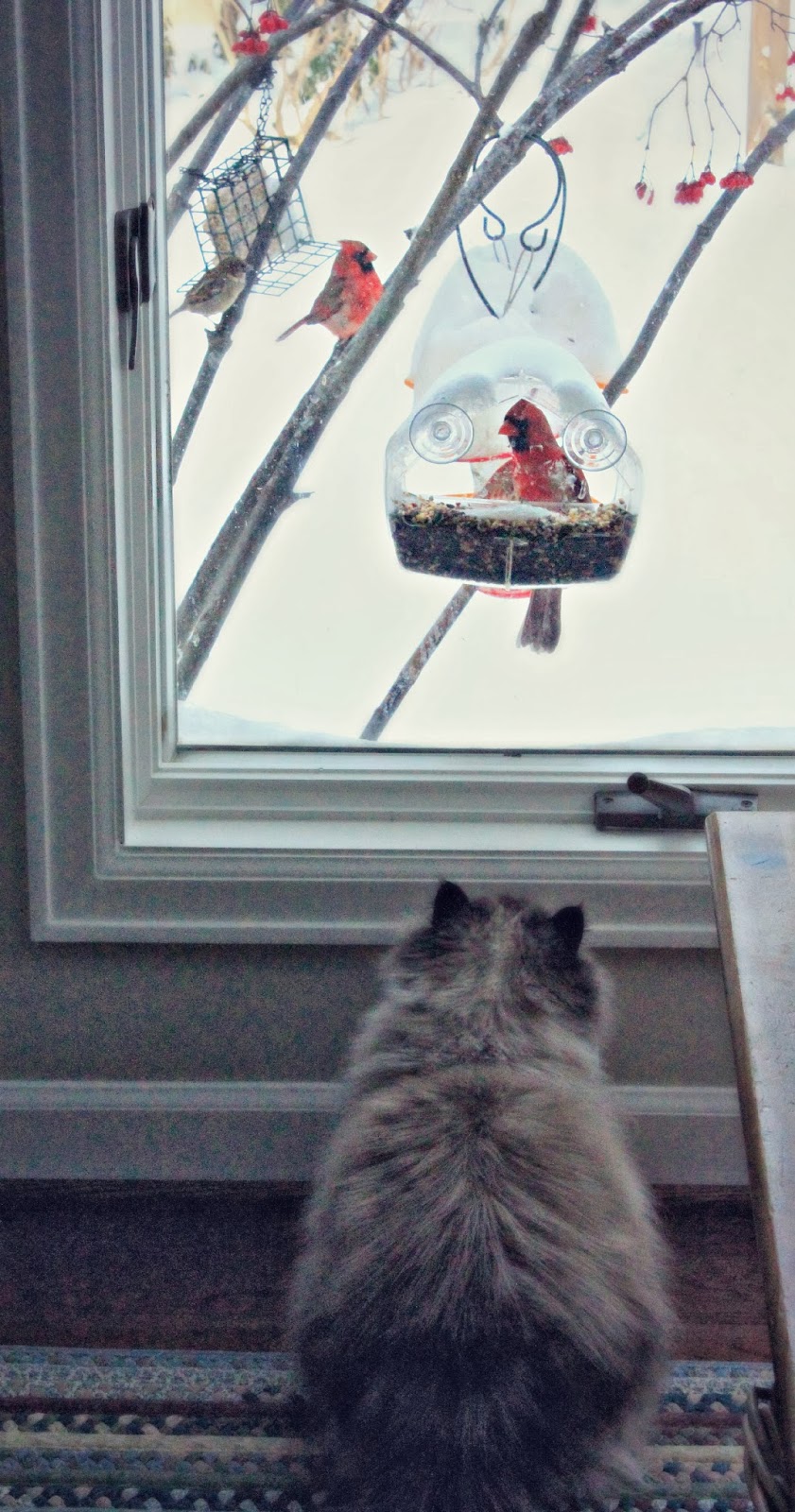 Until next time, watch out for those virus bagels and enjoy the birds!
xoxoxoxo,
Lauren
at February 08, 2014