I was just telling my friend behind the counter at my local coffee shop how much I missed the seasons when we lived in California. This came up because right before this statement, we were talking about all of the snow and how COLD it felt today (currently 19 degrees).  For whatever reason, when many are big warm weather lovers, I could spend the whole entire year in fall and winter. It actually makes me happy! Spring and summer not as much.

We're coming up on the Winter Solstice, the shortest day of the year and the longest night of the year. For the past two Winter Solstices Noah and I have meant to celebrate, but something always came up. This time around, I hope to at least acknowledge it a little. Maybe a craft or a special dinner. Yesterday as we watched the snow floating down from the sky for 36th straight hour, I remarked how awe inspiring and amazing the earth is. I feel grateful for the change of seasons, they're one thing in life that you can count on!

We had quite a bit of snow over the weekend. Before this, we've on had a dusting. It started coming down late Friday night, and it didn't stop until Sunday evening.   I was a little concerned because we had to be in West Bloomfield, a city about 25 minutes away,  at 10:30 Saturday morning. Jon and I were going to a B'nai Mitzvah service, that's a bar and bat mitzvah service for my friends boy/girl twins. Isn't that sweet!? It was very moving to see those two up there, and hear their parents blessings to them, and see their extended family come together to support the kids. They each did such an amazing job.  I even er......cried at a few partrs. So moving! LOL. KEEP IT TOGETHER LAUREN! ;)

In the end we were there right on time. One of our cars has 4-wheel drive so it worked out. Saturday was going to be such an exciting day. After the service we has a little "oneg" with our friends. That's where everyone gathers in the vestibule for coffee and cookies and other refreshments. They were delicious! Then Jon and I made our way to my parent's house to pick up Noah and head home.

Because the snow was so GORGEOUS, we decided to take a walk to lunch in town. This is so trivial and silly, but it was the first time that I've really tucked my jeans into my boots. ALL HAIL SKINNY JEANS!!!! You guys, I'm so hooked. It made a huge difference, especially when tucking them into my warm Bogs boots. I was really warm enough to stay out all day. 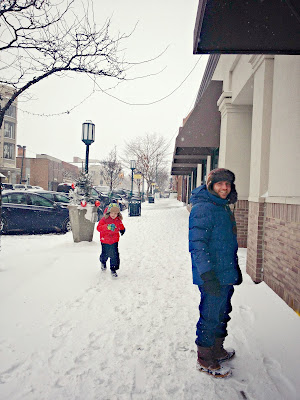 We ended up at Noah's favorite - Panera. It was definitely a soup kind of afternoon. 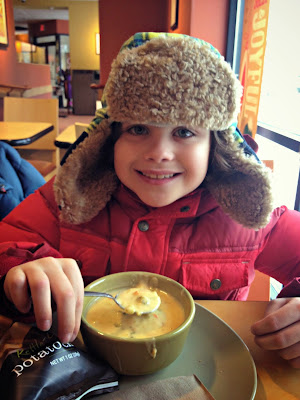 After lunch we walked around the corner to Commonwealth, the little coffee shop that I always speak of. They have the best coffee, and it's roasted in house! On this day I treated myself with a mocha. I love the "art,"  I've never had this laurel of leaves. It was pretty! 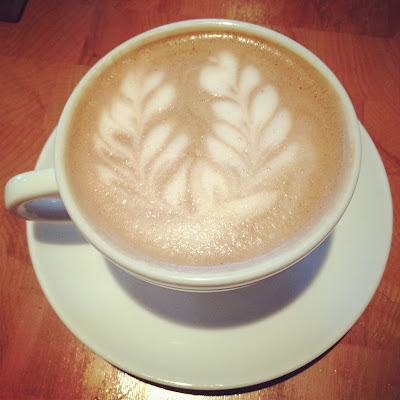 Noah is newly obsessed with coconut water, and Jon ha something called a "C. Latte" which uses sweetened and condensend milk. Then they played chess. This might be one of our new Saturday rituals. 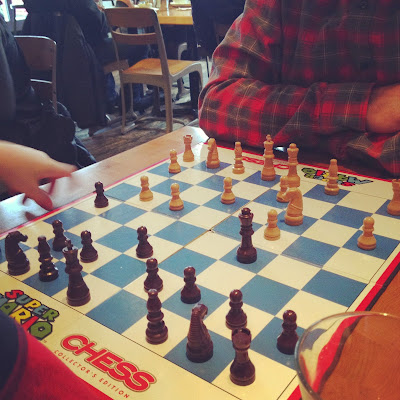 After bellies full of warm soup and hot coffee, we walked home to shovel. I was surprised at how much snow came off our little driveway, enough to build Noah a snow fort that he dug through. We were also amused by the giant plow truck carrying a massive load of salt drive by over and over. And, my favorite from childhood, the little jeep-like truck with the big rotating brush on the front. It DRIVES on the sidewalk and sweeps all of the snow away.

Eventually we had to go in though, I needed time to throw all of our wet snow clothes into the dryer and to have they dry before we left later that evening for Holiday Nights! Holiday Nights is a WONDERFUL event held each year at Greenfield Village. I've spoken about Greenfield Village before. It was started by Henry Ford many years ago to highlight places of importance in American History. It's an outdoor LIVING history museum!!!! For example, Henry Ford bought, dismantled, moved to the village and re-assembled Thomas Edison's laboratory and Abraham Lincoln's first courthouse, among many other significant buildings. Each home and building is staffed by presenters dressed in period clothing. They are so knowledgable, telling stories and answering questions. They play a character and you feel as though you are transported back in time!

Holiday Nights is a historic Christmas market of sorts. There are warming fires everywhere, people in costume caroling, old fashioned holiday crafts and food stalls and so much music. It's really lovely 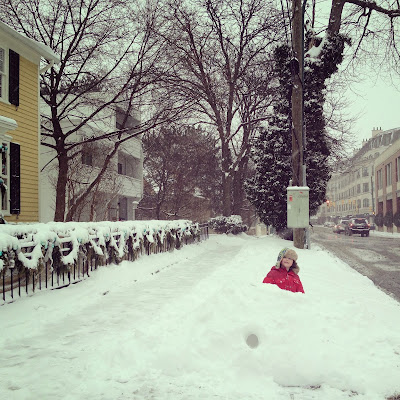 Here we are taking our picture before heading out. We know this was a bit crazy because it was still coming down outside and was FREEZING! Also, it was completely dark, and we were about to go spend hours outside. Were we crazy? Maybe! The first is a normal picture, then we did a crazy picture.

The roads were terrible, at least until we reach the freeway. Then it was slightly less terrible. We promised to turn back if it became too dangerous, but we made it, so that was good! 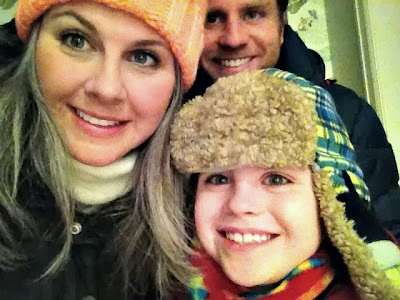 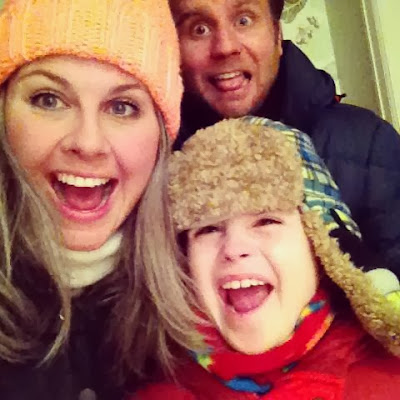 When we arrived, I told Noah to remember this night because it would be magic, and it was! Something about all of the snow, and the glow from the lanterns that lined the roads. Jon snapped this photo of the Eagle Tavern. This tavern was built in 1831. It was a stagecoach stop! It still operates as a restaurant, just not so many stage coaches. 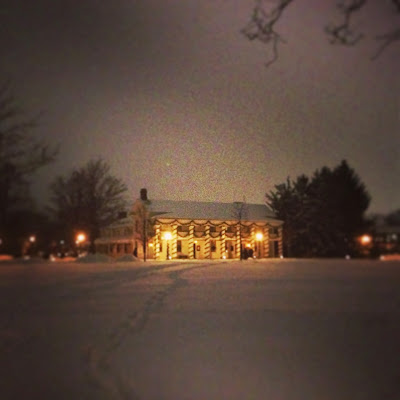 Something that amazed me was how well all of the old cars actually drove in the snow! As on all days at Greenfield Village, there were Model T rides available. No cars are allowed in the village except for these Model T's that drive around and things like the old fashioned "omnibus."  It was pretty neat though, the Model T's have such large tires, they really seemed to get around in the snow OK! 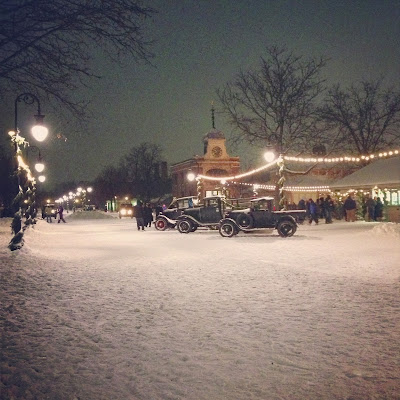 The highlight of the night though, at least for me, is taking Noah to see the REAL Santa Claus. Well, that's what I hear. An amazing looking Santa perches on top of Robert Frost's house and waves and calls to all of the children below. There is a group of women in red velvet cloaks across the street from the house, and what you do is sneak up to them and whisper your child's name. They relay this up to Santa and he booms out: "Well HELLO Noah!!!!".   Isn't that great!? Noah is always speechless. It's so cute. I think I get a little too into it though. I have a grainy video and you can hear me laughing and yelling: "Hi Santa, we love you!!!"" in total seriousness. Sometimes I forget that I'm not nine.

Also, because this Santa is REAL, of course he brought a couple of his REAL reindeer. Aren't they beautiful? They seem like such gentle creature. Noah became suspicious and thought that they weren't Santa's real reindeer because he asked "Who that guy holding them?" And without skipping a beat (THANKFULLY) I said: "Oh, him? He works for Greenfield Village! When Santa makes all of the effort to come here Greenfield Village does whatever it takes to make his stay comfortable. They have somebody care for the reindeer and then they take them to their stables to rest." I'm glad he bought it. Phew! :) 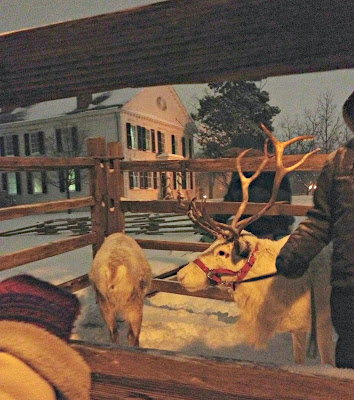 Noah, all a-glow after Santa said hello to him! :) 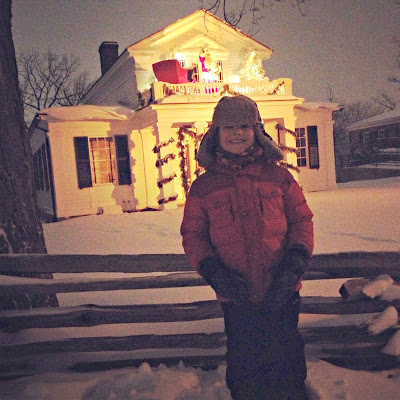 I'm not sure who these guys are, but I think that they're wassailers? 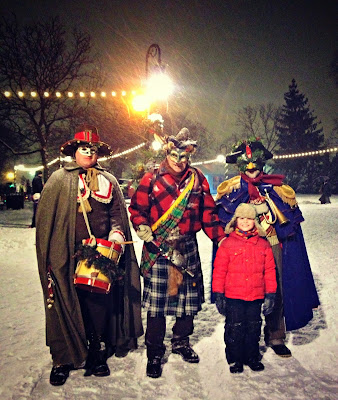 And look at the market area, isn't it pretty!? The house you see here is the Heinz House, boyhood home of H.J. Heinz of the Heinz Company! Across the street is the Wright brother's home AND the ACTUAL Wright Brother's bike shop and workshop where they built their first glider. SO COOL!!!! 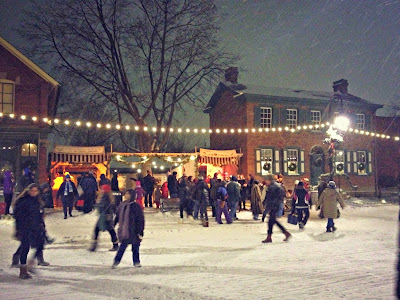 Noah and Jon like their roast beef sandwiches which are carved old-fashioned style over an open fire. Too bad for me there weren't like......any vegetarians back then. It was ok, I got a soft pretzel out of it. 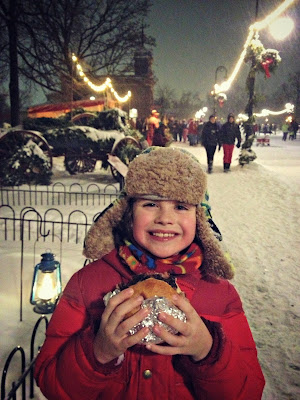 They even sold old fashioned looking Christmas trees and wreaths! 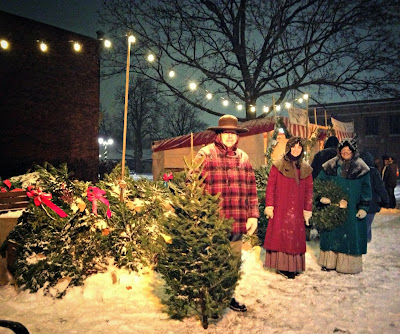 But in the end, in true boy fashion, the thing that Noah loved the most (BY FAR), was climbing up the "pile of snow".  He didn't want to leave, he asked to go back to the pile over and over. Kind of like the time we took him all over San Francisco for a week and upon return, told his teacher that his favorite thing was the "bagel with butter" that he had every morning.  Sheesh! 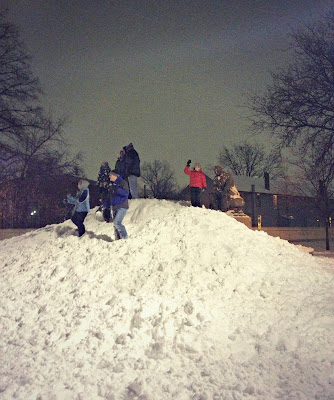 I want to tell you one more thing. With all the snow came some beautiful birds! The make Cardinals looked SO beautiful against the white snow and the red berries. We also had Blue Jays with their striking blues, Woodpeckers, Sparrows and Mourning Doves. 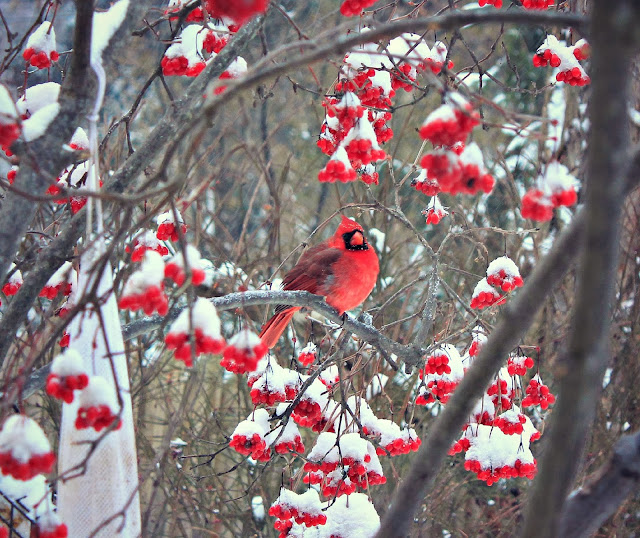 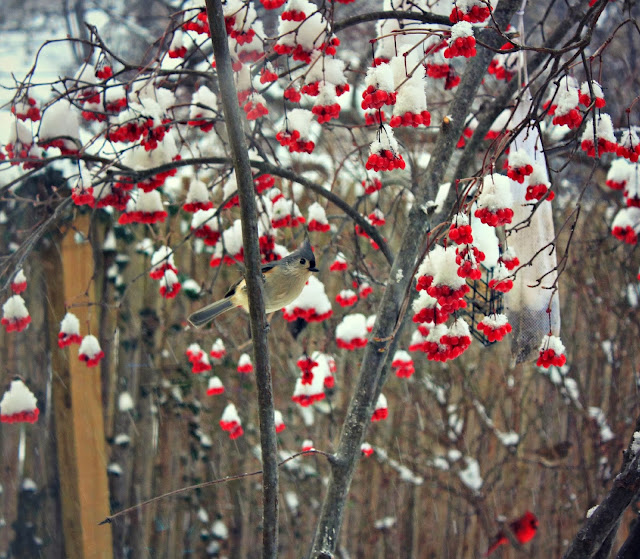 And a very brave Black Capped Chickadee who came up to our window feeder. 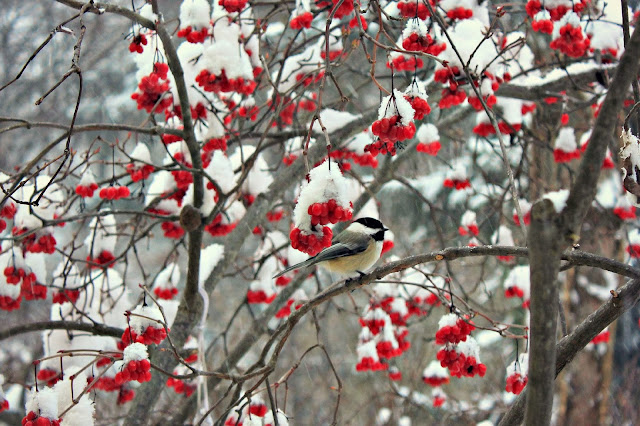 The Cardinals didn't seem to mind the weather. 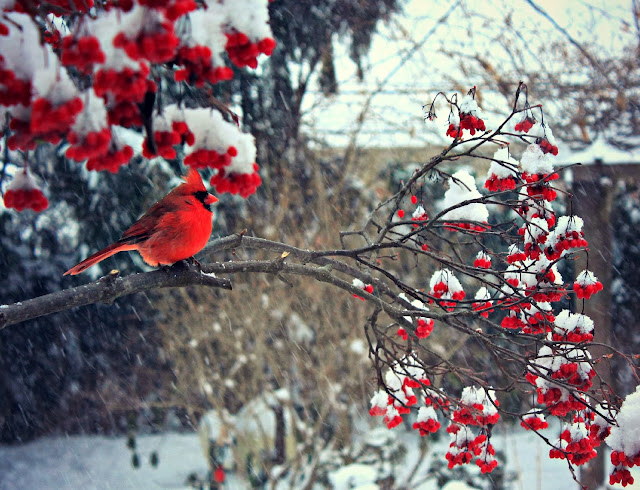 But THEN.....then THE MOST EXCITING THING EVER!!!!!!! I saw a....... CAROLINA WREN!!
A Carolina Wren!!!!!!!!!!!
I call this sweet, adorable little bird the "Puppy Bird" because he's so round and brown and adorable. I've been waiting for him to come back again since last winter!!! I believe they are only in these parts during the wintertime in general. I love the puppy bird so much! 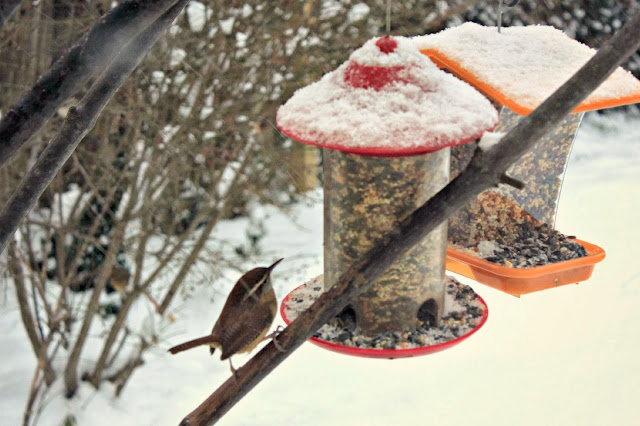 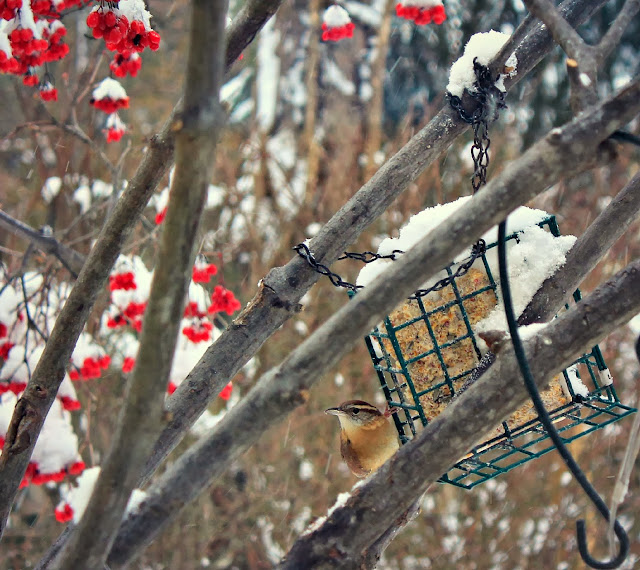 I see the Titmice, (is that correct?) often times in pairs. They're adorable. 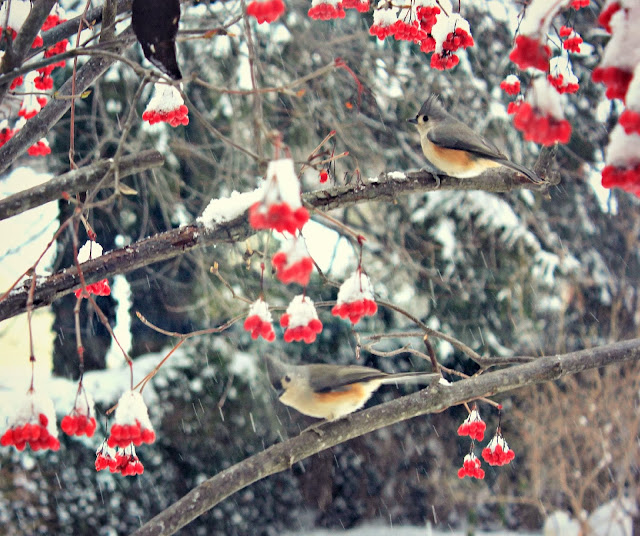 And that is the snowy scoop!
Until next time, stay warm and get out there and have some fun!
xoxoxoxoxo,
Lauren
at December 16, 2013

The picture of the cardinal is card-worthy. You have such a fun blog, Lauren, thanks for the entertainment!

Hey Tanya! Thanks so so much. I really appreciate it! :)
xoxoxoxox,
Lauren

That village sounds like so much fun! And I am so taken by your bird photos. They're amazing. How I wish we saw cardinals regularly sound here. I got a hummingbird feeder for Christmas and can't wait to see if I can attract them this summer.

Hey Loulou, thank you!
You know, the village is only 3.5 -4 hours from you. It's so interesting, and huge! I'd say you need two days to see everything, AND they have an incredible museum as well! Many people come from far and wide, there are nice hotels nearby like the historic Dearborn Inn. If you and Nick ever come, I'd love to be your guide! :)
xoxoxoxoxoox