The snow began falling, along with the temperatures and the number of times that you hear the phrases: "Oh I hate winter." and "Just as long as it doesn't snow anymore." But for me, I don't mind the cold and the snow. In fact, I welcome it! Anything but 90 degrees and humid, I'll take that! This photo of the snow falling from my bedroom window, does not do the beauty justice. I wish I could show you exactly what it looks like to see out over the roof, through the trees and over the little valley. 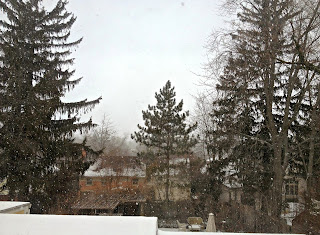 Shortly after this photo was taken, a hawk glided in and perched on a tree high, high above our yard. The interesting thing was that there was a flock of crows following the hawk and cawing at him!
I found this statement in Crows: The Bad Boys of Birding by Kathy Bernhardt:

"Crows chase hawks and owls for the same reason that mockingbirds chase crows: to purge their territory of a potential predator."

I suppose that explains it! I wouldn't want a hawk taking over my trees either. Although I'm terrified of the hawk, and I am heart-broken by the birds and the bunny that he has caught in our yard, I know he's a living being too. I feel as though I need to make myself find compassion for him. But, does a hawk even have compassion himself? I suppose as humans, that's one of our higher jobs, to have awareness and use our capacity for compassion, even where others can not.

As fruit-loopy as this sounds, this fall I had a transformative experience when the hawk swoopped down and landed in a small tree near the mini-pool. I ran outside. I was hoping to scare him away, but it was I who ended up being the scared one! For a moment though, I stopped and everything was still, and the hawk turned his head and looked me straight in the eyes.  I looked back into his eyes, and I realized (from his markings) that he was just a juvenile and that he was out here alone in life. As funny as it sounds, I saw in his eyes that he was vulnerable too, and that he was just trying to live and survive. I felt a surprising feeling of empathy towards him. It thawed my heart a bit, like in the Grinch Who Stole Christmas. And so I learned to have some love for hawk too. It's a complicated relationship. 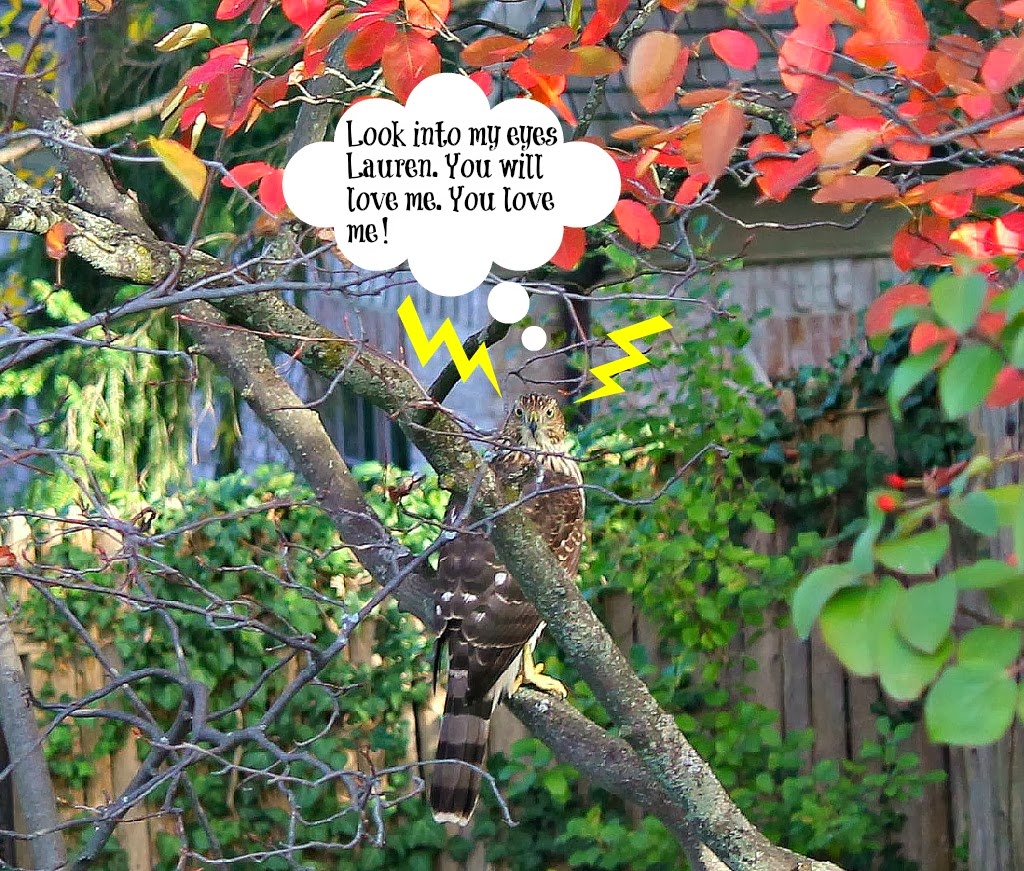 At any rate, the temperatures have been cold, even one day with a high in the teens! We're also supposed to get more snow in the next 24 hours. Maybe even 4-6"! I can't tell you how much my fingers are crossed for a white Christmas. It just helps everything feel that much more festive.
Here is the yard yesterday . It's difficult to see, but there are three bright red male Cardinals and one female in the Wisteria vine on top of the pergola. 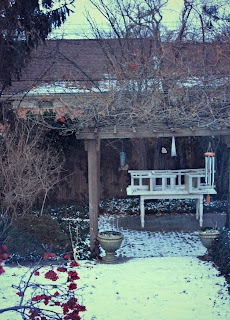 I've been thankfully slowly getting back up to speed since "the stomach flu incident", doing a little more everyday. By Wednesday the sight of me in the kitchen didn't set off any alarms, and with an obscene amount of hand washing, I was cooking again. Nothing complicated, just tomato soup and grilled cheese night, and a mushroom ravioli night. I did make a very easy chocolate peppermint cake. The Trader Joe's mix that I tried out last month. Because of crippling fatigue brought on by the stomach flu, I was too weak to actually smoosh the candy cane into tiny piece with which to sprinkle atop the cake. Instead I just snapped a couple of canes into pieces and stuck the bad boys into the top of the cake like disgusting Christmas worms. Or, maybe I was just lazy..... 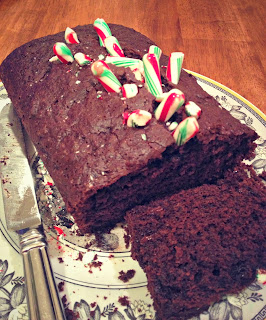 I had read that when recovering from stomach flu, you should avoid caffeine. So, diligent  panic stricken as ever, of course I followed the Mayo Clinic's dietary  guidelines to a tee. No caffeine, nothing sugary, the B.R.A.T. diet, clear broth. This went on for days, and by the third day POST stomach flu, I realized that I could just chill a bit with the food precautions. So, I tried my first cup of coffee in five days, but I made sure it was decaf , just to be SAFE! 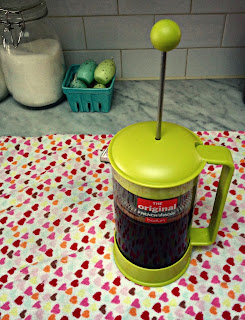 But, I couldn't help myself, and added in some sugar cubes and an almond biscotti. But then, I felt so guilty for "breaking the dietary suggestions" with sugar, that I took three sips and called it a day. (Although, this was after I inhaled the biscotti.......) 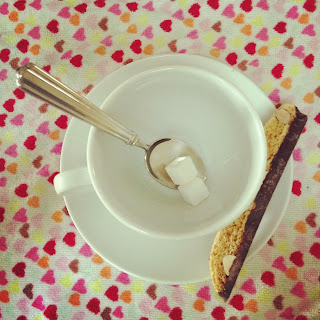 Here is a little project that I did this week. They're gift bags for our teachers! I found small, cotton tote bags at the craft store, and then used a ruler and fine-tip sharpies to make each bag look like a sheet of lined paper! (I'm sorry that the picture is so small, but I also wrote each teacher's name on the top line.) HERE are the instructions that I found a from the site: Sun Scholars through Pinterest!
These are a lot of fun to make. I also made the bags last year, and that time had Noah write each teacher's name and draw a picture of them on the bag, like the original Sun Scholar project. This year I decided to keep things simple. Then we will fill the bags with our two surprises and some tissue paper. 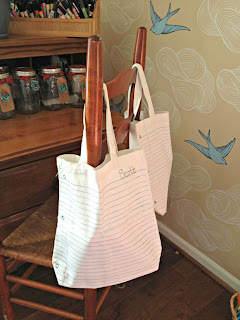 Each year, the second and third grade at Noah's school runs a "Recycled Store". The children work very hard for weeks to come up with and make gift items made from recycled products, that they then sell them at their pop-up store! All of the proceeds go to a selected charity. Some time before, each child is instructed to present to their "stage" (which in Noah's school means a two-year split of children, like 2nd/3rd grade.) what their charity of choice is. Slowly, through debate and a voting process, the entire stage chooses one charity to be the recipient of all of the proceeds. This year it was a local animal rescue shelter.

This year the children raised over $2,000 for charity! Isn't that amazing!!!? I'm very proud of them. The variety of gifts was wonderful, they worked so hard. There were banks and wrapping paper and sculptures and cat toys, all kinds of things! Here is my favorite though, a simple "melted snowman" ornament made from glue and other bits. 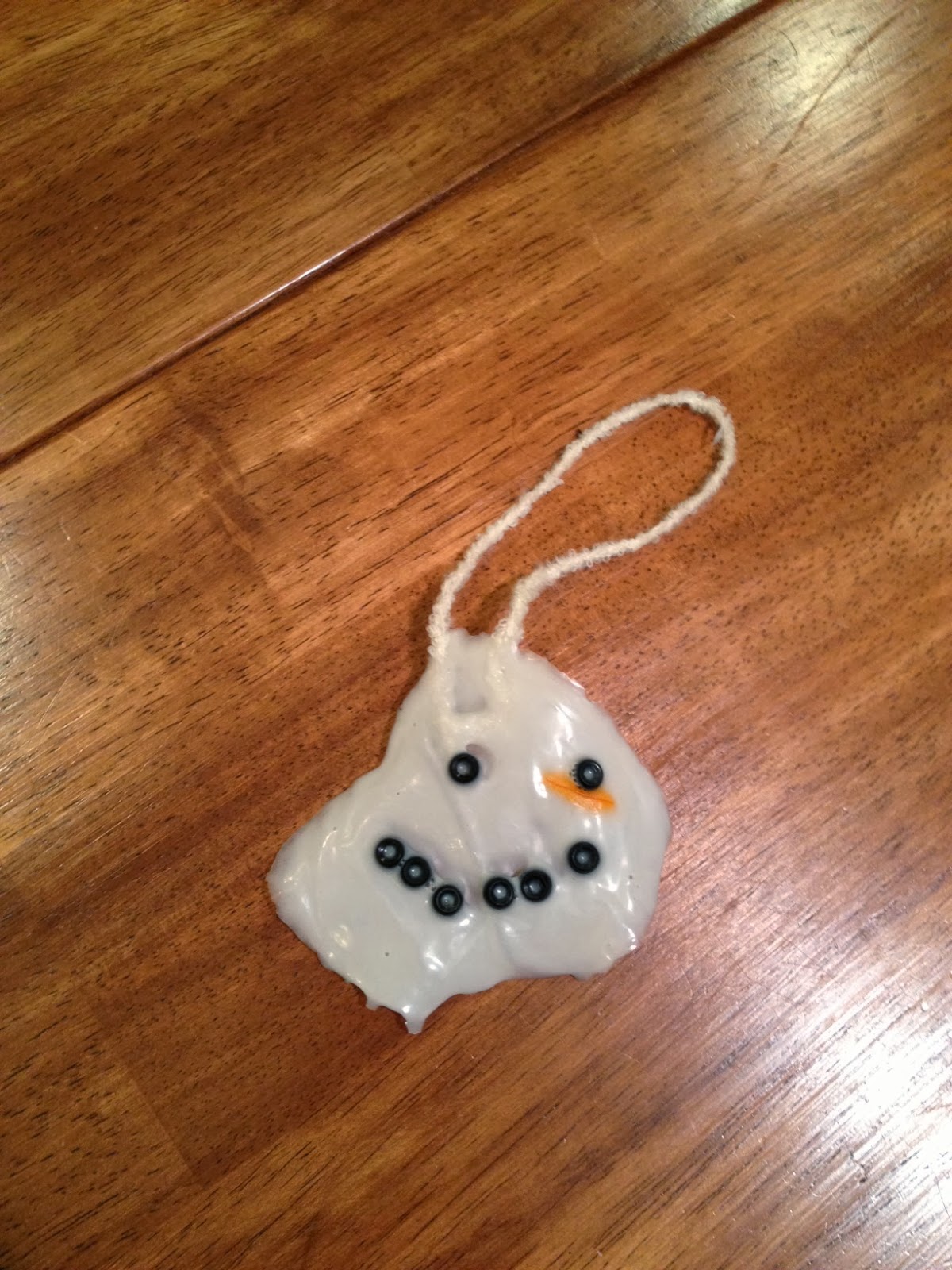 After shopping at the store, I went upstairs to Noah's locker and saw one of his drawing hanging on the wall! I just had to share because I love it. This is called "Minotaur". I love the detail of the six-pack stomach. 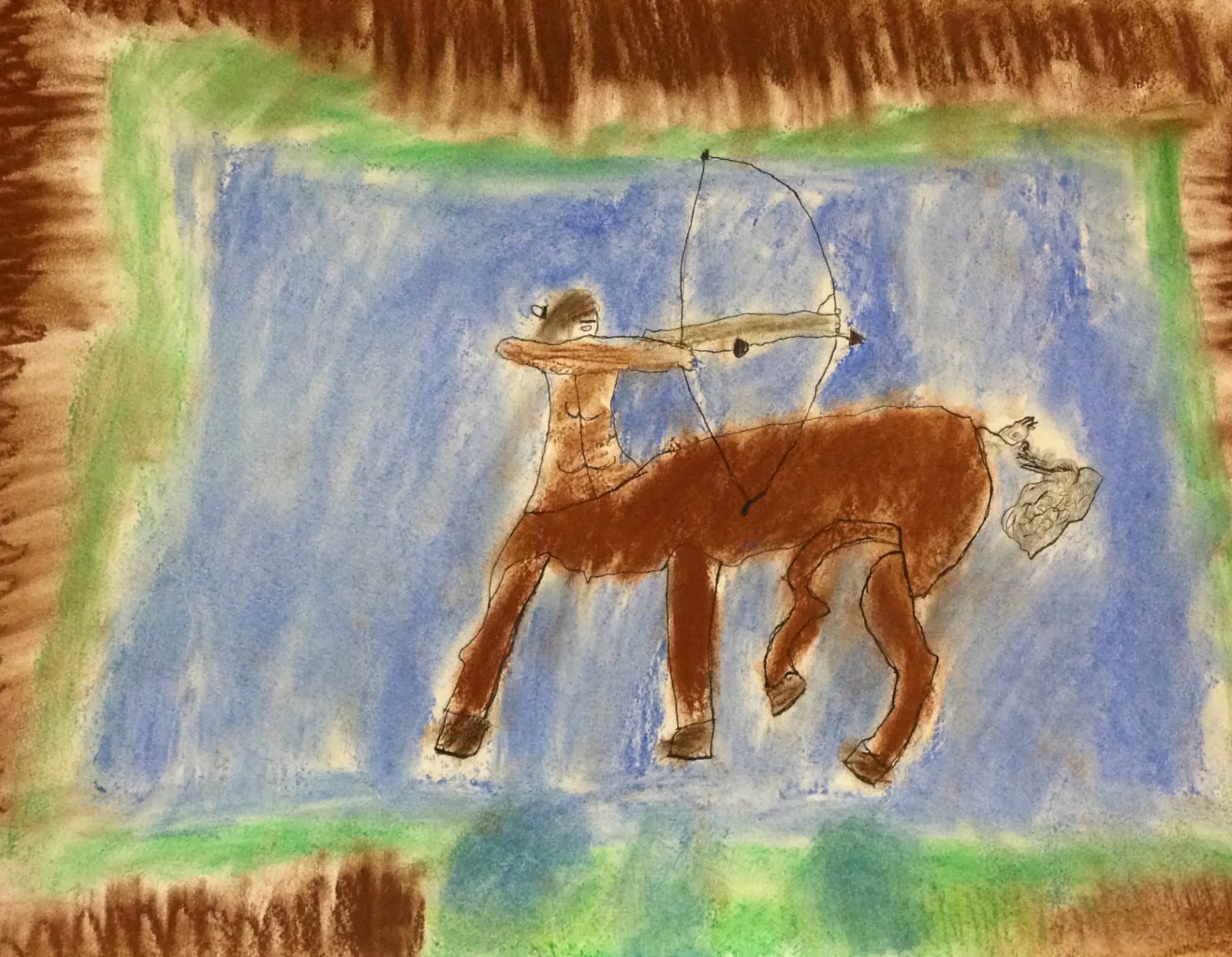 It's been really cold around here. The high yesterday was only 19 degrees! I had to turn on the fire to help warm up the family room. I thought it looked cozy, so I took a picture. Those gifts aren't for us, they're for our extended family. I feel VERY relived that most of my holiday shopping and wrapping is done! 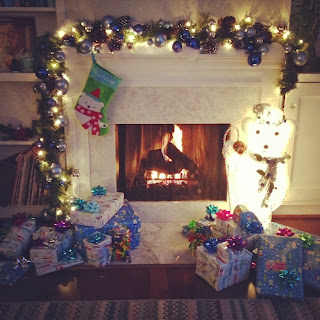 But guess what happened TODAY!? Guess!!!!
Today I had my FIRST CAFFEINATED coffee in SIX DAYS! I was sooooo scared, but I couldn't take it any longer, and went for a latte' and a writing session. Boy was it good! Here's the thing though, I've been sleeping so well this past week. Could it REALLY be because I haven't had caffeine? I usually only drink 1-2 cups of coffee a day tops! So it's not like I drink a lot. Hmmm, we'll just have to wait and see if I'm up all night tonight. I hope not! 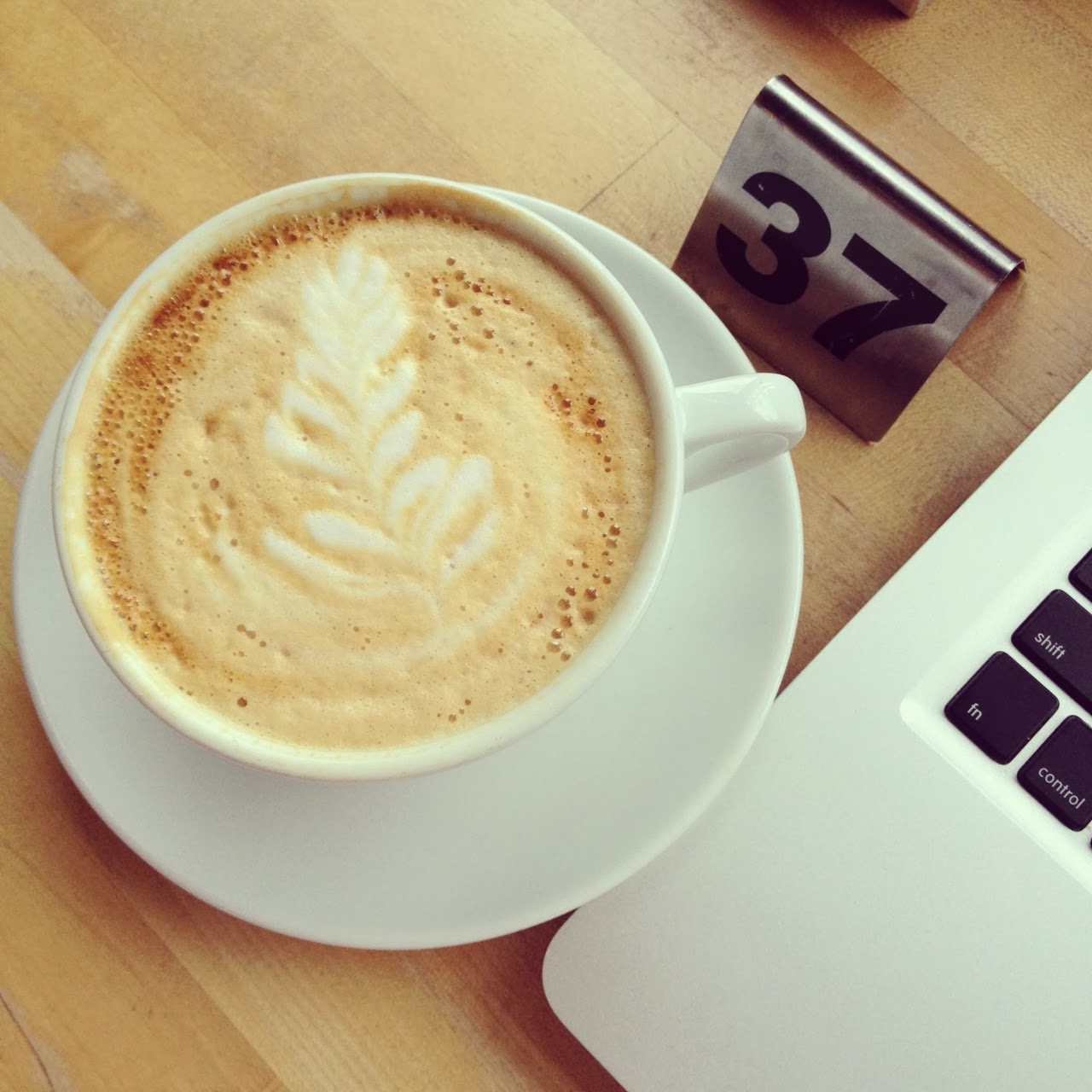 Well, good news. I think I now have a new winter "uniform" - Skinny jeans and thermal shirts. (I'm not saying that I look good in this uniform, but at least it will keep me warm.) Not the most stylish and earth-shaking uniform, but it works for me!  Even though I'm about three years late on this trend, this week I became obsessed with "skinny jeans".  If you know me, you know that for a long time, I've worn dresses like, EVERYDAY, even in the winter. I hated jeans, and the ones I had were bootcut, so they never fit into my boots and ended up dragging on the ground in the snow. It was miserable! So at least with dresses, there's nothing to drag on the ground. But, thick tights are still just that, tights.

So when I tried "skinny jeans" this week, it was life changing! I've been wearing my Keen Howsers with them, so I do look a little like one of Santa's elves, but I don't care. Not having your cuffs drag on the ground is LIFE CHANGING I tell ya! 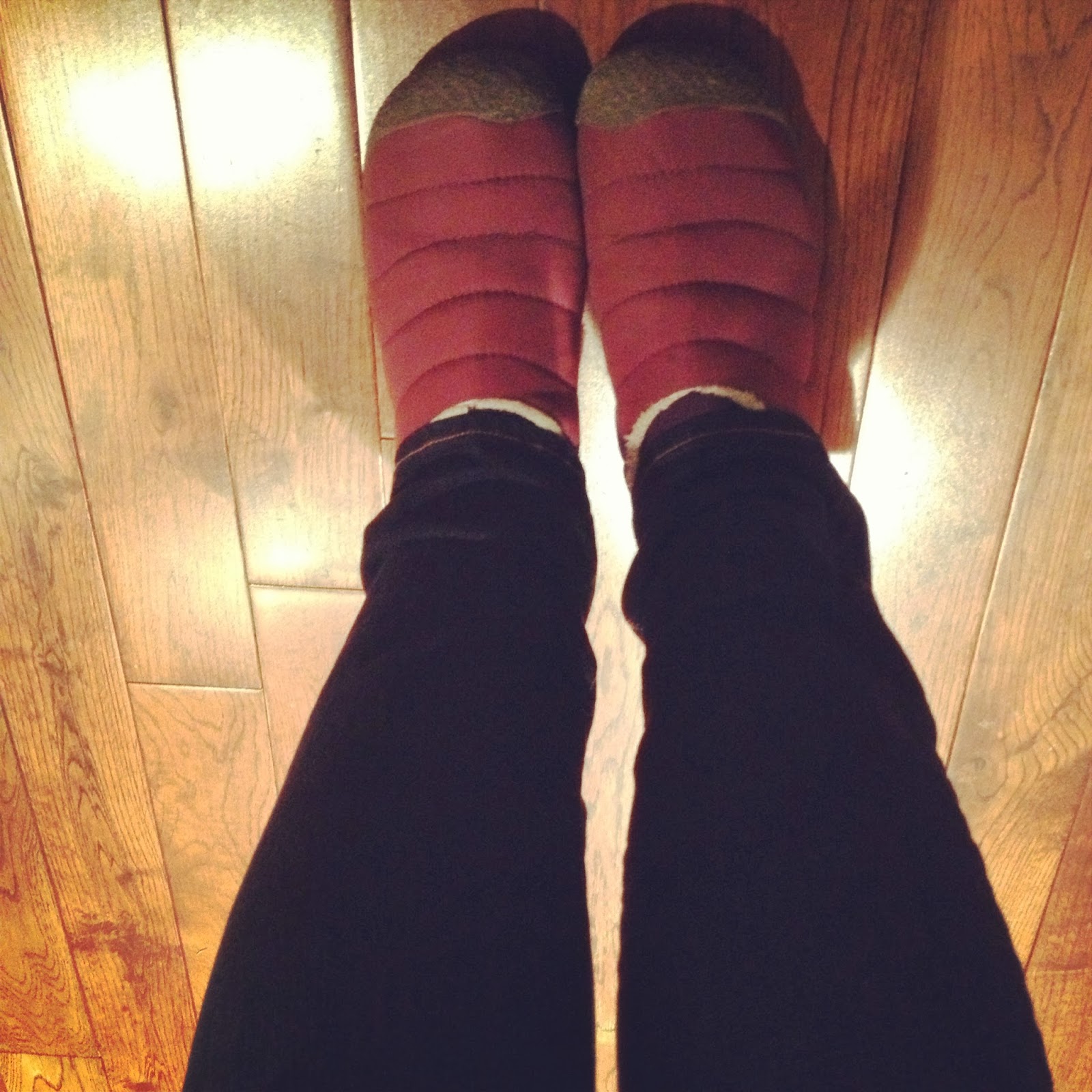 Anyway, back to business.  I saw that Old Navy had some thermals.  I like that they're slightly scoop neck, and that they come in cute prints like this polk-a-dot. Also, today they were on sale, so a picked up a couple for under $10! I have some other thermals at home that I found at Target, or have had for some time. I think the key is to get the girly ones. 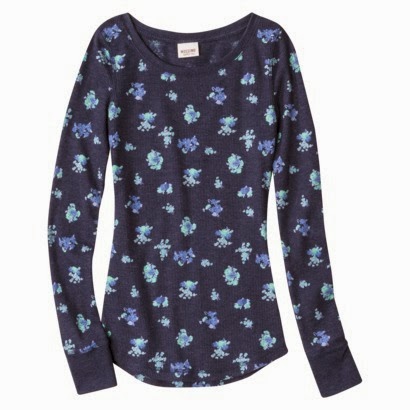 I usually layer a coordinating or contrasting color tank top underneath. My favorite are these lace trimmed tanks tops sold at Target! 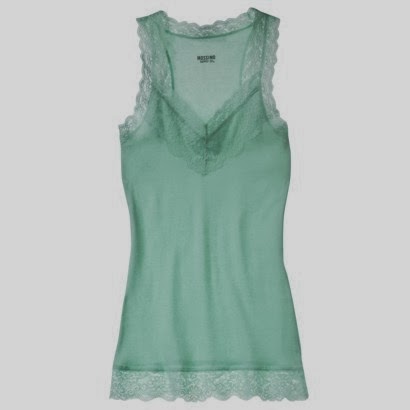 As for the jeans, I still stand by Jag Jean's Peri style, but I decided to try out a pair of Old Navy jeans on a whim. I own a couple pairs of their Sweetheart jeans in bootcut. If you're like me, and your waist measurement is 10" smaller than your hip measurement, then this cut is for you. It's their "curvy" cut, verses the Diva and Flirt which are straighter cut between waist and hips. ANYWAY, this time I tried the Sweetheart in the skinny version and they were pretty good! And, at just $20 (they were on sale), that's a deal! Surprisingly, the waist is a little big on these, but I guess I can't complain. The best part, I can tuck them into my boots! No more wet cuffs this winter!!! WOO HOO!!!! The only other thing that I have to report is that tonight we drove past the Christmas Light House. This is a house that's been literally plastered in lights and other decorations for 35 years! Well, around Christmas it is. These pictures don't even begin to show how large the display is. The house sits on a double lot, so the lights and blow-ups and decorations run just 70 feet short of a football field! Everything is covered in lights. The sad thing is, is that this will be the last year for the Christmas Light House to put on a full display. It's due to rising energy costs. I feel a little sad, but 35 years was a really good run. It's quoted in THIS article about the family, that it costs anywhere from $1,200 -$1,500 in December to power everything. Wow! Well, thank you Unger family, for all the years of cheer and Christmas joy. You made generations of people smile. :)

Well, that's all for now! This weekend will be full and exciting. So more later!

Until then, stay warm and keep your cuffs dry!
xoxoxoxoxo,
Lauren