It's A Tufted Titmouse!

A few thing from today for the sake of posterity....

A rare morning photo of Noah. The years of chasing behind him with a camera have come to an end. He hates to pose, but I guess many eight year old boys don't want to stand still for pictures either. 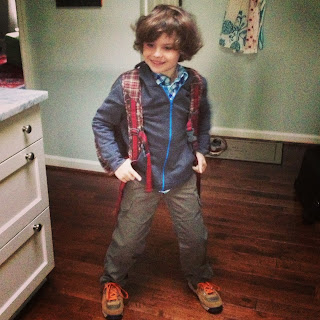 It's perfect fall weather! I walked over to the library because a book that I had placed on hold was in! The book is  Cat Sense: How the New Feline Science Can Make You a Better Friend to your Pet" by John Bradshaw.  I heard Mr. Bradshaw being interviewed last month on NPR's  Fresh Air with Terri Gross. The book sounds very interesting. Maybe I can finally understand Hector and Willow better! Click Here to hear the very captivating (at least for me)  and informative interview about Cat Sense! 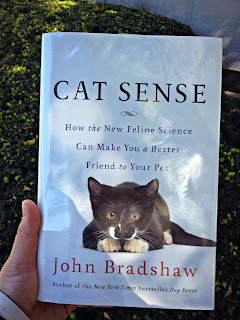 This is a terrible photo, shot from behind glass and a screen, and with a very distracting pink pool toy in it, but LOOK, my new bird feeder has arrived!!!! It was less than $10 on Amazon, and attaches to our window. I hope that the birds will take to it. I'd love some up-close bird watching.
I'm so excited!!!! :) 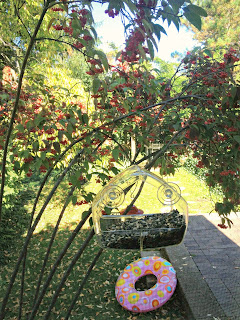 I've started a new crochet project.  I'm supposed to be making THIS hat using a Lyon Brand pattern and my new wool yarn. 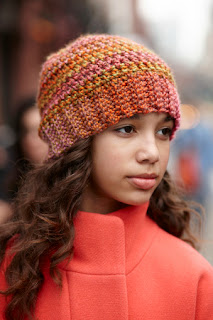 It seems to be quite large though. I guess we'll just have to see how it turns out. I LOVE working with thick yarn. So glad that cool weather months are here! 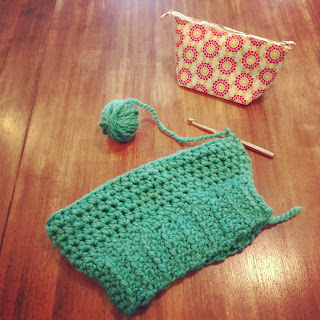 UPDATE!  Because it takes me an entire day to write a post, I have more to update you about today!

First though, look at this beautiful adorable Cardinal. I think he is a juvenile male who is going to change to bright red soon. 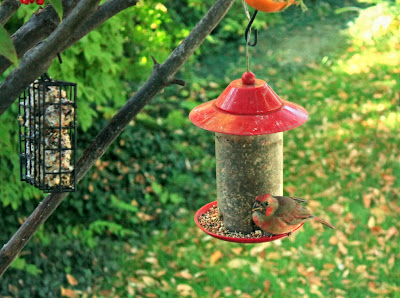 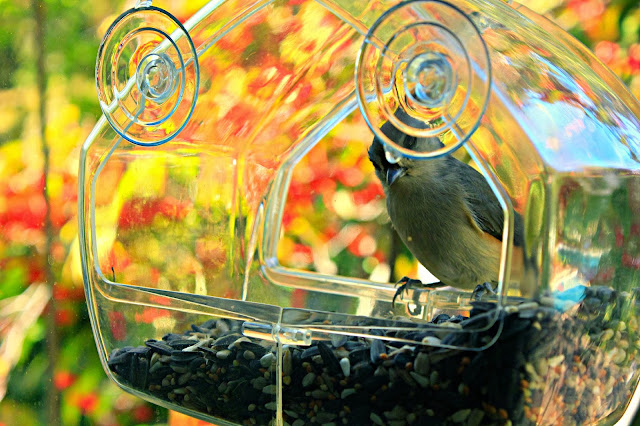 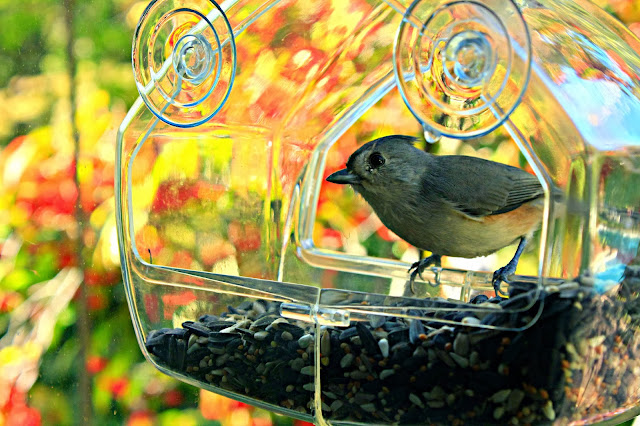 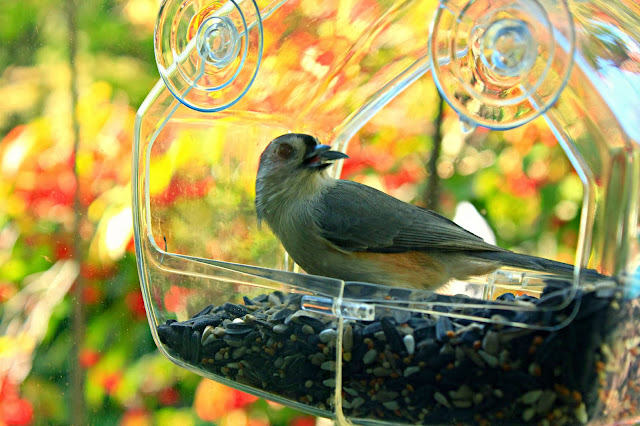 I was so excited. I can't even express. Mostly because I love the Titmice. They don't come around very often, and the Titmouse and the Cardinal were my first visitors of the Fall/Winter birding season, so I was excited in general.  Isn't it amazing that a bird can just come right up to your window!? I'm going to buy two more window feeders. This is the best thing since the invention of the wheel!!!!

Willow gave me a look when I put the bird feeder up today. 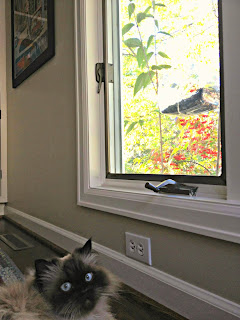 Then she sat there like this for the next five hours. 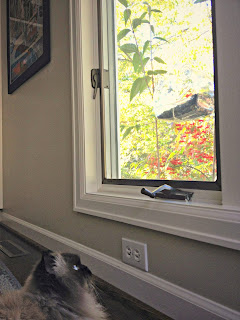 Then she realized that she could stand up and watch. 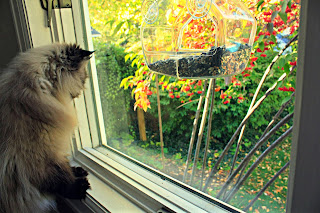 And then she met a Tufted Titmouse and went BONKERS and punched the window and he flew away. The End.

Actually, not the end. I took the screens off to get clearer photos. Then, I opened a can of wet cat food and got Willow away from the window. Then I grabbed my camera and sat very very still. And, the Titmouse came back! Two of them actually, and I was able to snap the photos above! 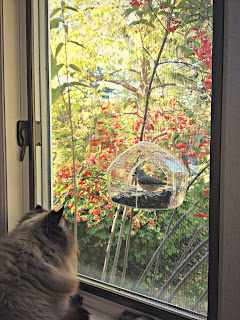 I was texting with my friend Molly today and saying that I always feel busy during the week. I'm never not doing anything. Never. This is proof.  SOMEHOW  I was able to finish my new hat by dinner.
But amazingly, I also managed to exercise, clean the house, wash , fold and put away three loads of laundry, write a blog post, run an errand, pick Noah up at school and make dinner TOO!  I swear to you, I must have five hands or I run around like a crazy squirrel all day. (Yeah, I run around all day.) I guess I just really like multi-tasking. It keep me interested and on my toes!

So, I like the hat a lot, but why is it so big and floppy? I think my stitches were too loose? I made a swatch to test the gage first. As I've said before, this is why I rarely crochet gifts. EVERYTHING I make comes out wonky. 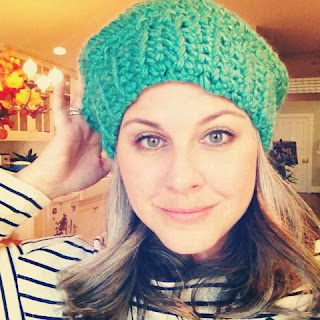 Noah took this photo of the back of it for me. Kind of a silly hat, but fun! 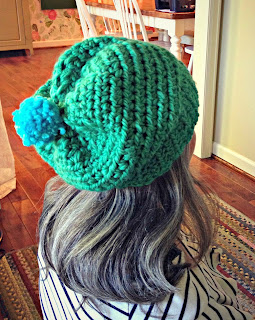 One last item for today. Taking appetizing photographs of food is so difficult for me. So, I'm sorry about this picture. Let me assure you though, the Skillet Gnocchi with Chard and White beans from Eating Well Magazine tasted much better than it looks.  Another pretty fast, pretty easy dinner. Basically you cook the gnocchi in a skillet, which is new to me. You remove the gnocchi after it's been browned. Then you sautee' in olive oil, onion, garlic, oh SPINACH! I used spinach instead of chard. You wilt the spinach and then add diced tomatoes and white beans for protein. It makes it's own sauce, which you top with a bit of fresh Mozzarella and Parmesan. It's quite good!
We also had salad on the side, some fruit, and Jon's favorite - garlic bread. 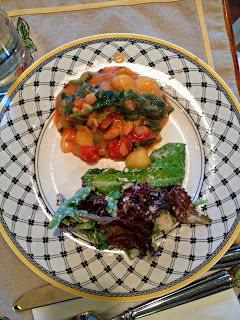 So that's the scoop!
Hope you had a wonderful Wednesday!!!!
xoxoxoxo,
Lauren
P.S. I'm very excited to be working on a new blog series. It's a house tour! If you're so inclined, please join me as we tour our little, old house. I'll be talking about the history of our 1860 home, and also about living in an old house. I want to touch on decorating too, and finding deals. Please join me!

Nice Lauren! Love following the activities going on with you and the other members of the Family ! :-) a few things:
1- the hat is perfect. It may seem big, but if you ever wash it, it will probably shrink some. And it's definitely you!

2- just figuring out that you are an avid birdwatcher. I didn't know that about you, and that is pretty cool.

3- any concern about the birds potentially flying into the window trying to get to the feeder?

Thanks for the nice read, as always!
Don

I hope you don't mind, you left such a sweet comment, and I wanted to publish it, but just needed to take out our last name. So I'm now reposting it!
Thank you so so much Don!!! :)
1.- Ooooh. That's a great idea about washing the hat. I never thought of that. Perfect! I just might.
2. - I've only been bird watching for a couple of years, but I just love it. Super interesting + relaxing. The Hydra needs a birding section someday! :)
3.- Funny you say that. I made some birds our of paper and stuck them to the windows a bit higher up. So far, it's done the trick. One of the paper birds is even a Titmouse!
4.- NICE! I love the end of the year challenge Don. Sounds good!!!!

Everybody, meet Don. Go to his BEAUTIFUL site THE HYDRA , an online forum full of information and discussion of the "nature hobbies". It's gorgeous.
Go HERE -> -> http://hydraforum.com/

Your cat is cracking me up in the pictures where the bird feeder is up! I love it!