That Time Your Dad Was On the Home Shopping Network

It's Friday! It's Friday! I don't care what's going on, good or bad, if it's Friday, everything's a little more happy and light. Fridays are my favorite day, even better than Saturday! That's because Fridays are full of hope for the weekend to come. That hope, that dreaming, that excited feeling, it really is the best, isn't it!?

Today is what I think will be the last of the hot, humid days. It's very muggy out, and they're calling for highs in the mid-80's and rain is on it's way. I spent the morning doing four loads of laundry, resisting the urge to turn the A/C on again. (Tomorrow's high will only be in the mid-60's.) Our washer and dryer are upstairs in our little house, and they heat up the entire second floor in minutes. I hopped on the treadmill between loads and felt as though I were walking through the tropics! I eventually caved though, and turned on the A/C.  Now my hair and cats thank me.

Speaking of weather, last night we had an FANTASTIC storm! There was so much thunder and lightening at first, and then a downpour! It started around 3:00am with a huge BOOOOM right over our house. Or, what seemed to be right over our house. I woke up and and started listening for Noah, and sure enough: "Moooooooooom!!!!!!!"

Noah came into our room half asleep and all upset. You know when you're not fully awake, and you think that you have a brilliant idea, but it's not really so brilliant?
Our bed is pretty small. It's only a full. Noah twists and turns and kicks and I thought it would be impossible to fit three of us across our little bed. So with my half-awake brain, I said: "Noah! Why don't you lay down perpendicular to us at the end of the bed!" I gave him one of my pillows, he snuggled in, I covered him up and like that, he fell asleep.

I quickly realized though, that if you have a small bed, and an eight year old is taking up at least two feet at the bottom, YOU CAN"T PUT YOUR LEGS OUT STRAIGHT! At first I tried lying on my side, all curled up..... but that got to be uncomfortable. Then I tried laying on my back, they way I prefer to sleep, but with my legs folded up, knees in the air. Not so easy to hold that pose all night. I tried on my back, a crazy yoga "criss cross apple sauce" (Formerly know as "Indian Style") pose next.  That only left me with some kind of butt muscle strain. It was sort of miserable, and by 4:00am was wondering: "IS it wrong to use your sleeping child as a footrest ?"

Of course I didn't use Noah as a footrest, but I DID eventually end up spreading out and laying perpendicular myself! Poor Jon, that was a loooooong night. ;)

One really cool thing that I was thinking all about at 3:00am, was what it must have been like to live in our house during a night time storm in the 1860's! Just think about it! What did Ann experience as she slept in our room? Did she worry about leaks? Was she scared? Did she have better things on her mind like THE CIVIL WAR!?

It must have been very dark in those days without the streetlights that are now right outside, and the modern bank of windows off the back. It must have been louder too, as the rain came down. Ann didn't have the insulation in the attic that we've got now.  I wonder what the O'Connell's little daughter thought of storms when they moved in, in 1902, and the Clark's two boys who came in the mid-1920's. So many lives, so many stories. I have endless questions.

Well, guys, I've truly reached the bottom of the barrel with transitional outfits. I have to tell you that one of the biggest reasons that I am chronicling my clothes is not because I know anything about dressing, but because this is an exercise in "BEING IN THE PICTURE"!

I'm honestly not looking for compliments or reassurance, but I have always had so many insecurities about the way that I look. My body...my face...my clothes...my hair...my everything. I've always felt like an odd ball and the ugly duckling. Starting in first grade, and all the way through senior year of high school and even occasionally into college, kids mocked and made fun of me. I was called "fat" daily, and things like "four-eyes" and "troll". I need to work on self-acceptance and to learn how to like myself! Learn to be in the pictures!

I had come across several wonderful bloggers over the years, like Kate from Scathingly Brilliant, who said that taking regular pictures of themselves and posting them to their blogs, really helped them become more comfortable in their own skin. I decided to try and follow suit!
It feels a little self-indulgent or narcissistic, but just know, this isn't about trying to say that I'm some fashion queen, it's really about my year of change! :)

So yes, here I am scrapping the bottom of my transitional outfit barrel. Do you remember that I told you about some Boden tea dresses that I loved so very much, that I wore them through spring, summer, fall and winter!? Well, this is one of the two dresses. I have now officially worn them for a year straight! These poor dresses are now beginning to fade and pill, but I do my best to wash them gently and to hang the dresses up to dry.

If you're in the market, Boden always has some soft and stretchy print dress available. They're comfortable and fun. A great combination!
I paired mine the the flats from yesterday because they match the flowers in the dress.

I added a cropped cardigan from Boden for the morning, my brown bag, and these sandals from Dansko. But...then I decided it was way too hot out for a cardigan, and the sandals were just "Meh" with this outfit. Just so you know, I've owned two pairs of Dansko sandals and I absolutely LOVE them. You can often find them on sale. I found these at Zappos outlet site 6pm. Dansko shoes are the most comfortable shoe ever, and I find that their platform wedge heel is just the right compromise between a little height and being easy enough to run around in.

A few weeks ago I purchases some fall/winter pieces. One thing that I needed were shoes to wear with jeans when it's wet and cold out. I have my beloved Bogs boots, but they're pretty heavy and clunky to wear again everyday. That was a lot. Soooooo.......since I consider myself a wanna be "Mori Girl"

"The mori girls (森ガール) belong to a Japanese subculture. 'Mori' means forest in Japanese, and mori girls look like fairytale forest wanderers in their loose dresses, vintage prints and quaint accessories. Mori girls choose to live their lives on their own terms, stopping to appreciate the little things that others overlook amidst the hustle and bustle of daily life."

You are supposed to look like you just walked out of the forest like a nature gnome, which I am good at! So, I found the perfect gray, wool felt slip-ons from Keen! But, they were out of my size. :(
But then.... I found the SAME shoe, only in waterproof nylon on 6pm.com for only $34!!!! They were 42% off! I don't know how I feel yet about the nylon instead of natural wool, but they're probably more practical in our wet and snowy climate.
Anyway, I highly recommend 6pm, its a great site with lots of deals. 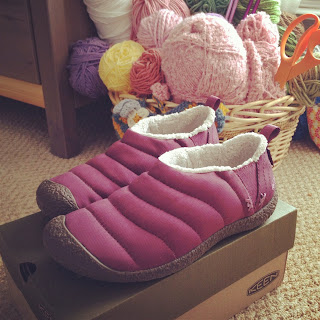 I have 11,786 photos on my Flickr account. And another 6,257 on my iPhoto. And who knows how many thousands on old external hard drives. I'm kind of obsessive about photo taking, aren't I?
Blame the kid for that one! I thought it would be fun to go back through my Flickr account, starting in 2005, and select a photo from the same week in September each year. Here's what I've found......

2005 - Noah was ten months old. Our friend Molly gave us her son Charlie's old ride-on train. Noah loved that train for a long time. Look at my little round guy. :)
Thanks so much Molly!!! 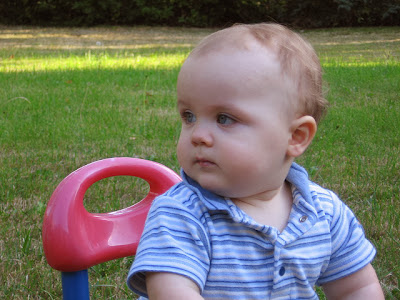 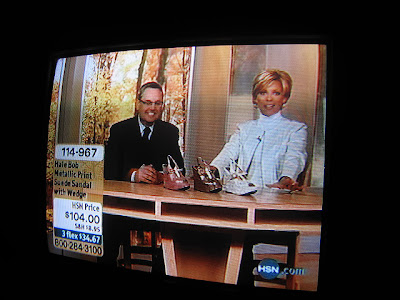 2007 - Hey, I bought Noah's Halloween costume early that year too! My cute Bedtime Bear. He was so happy. 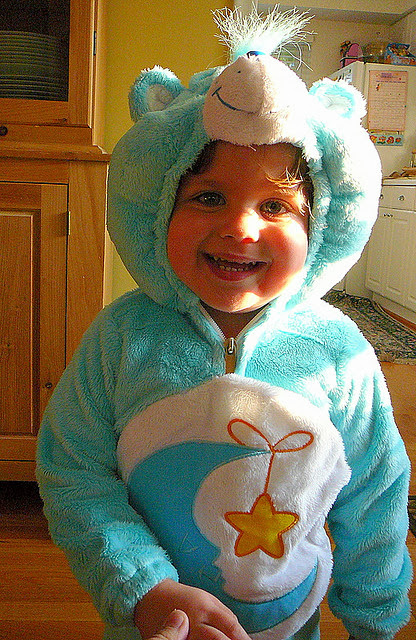 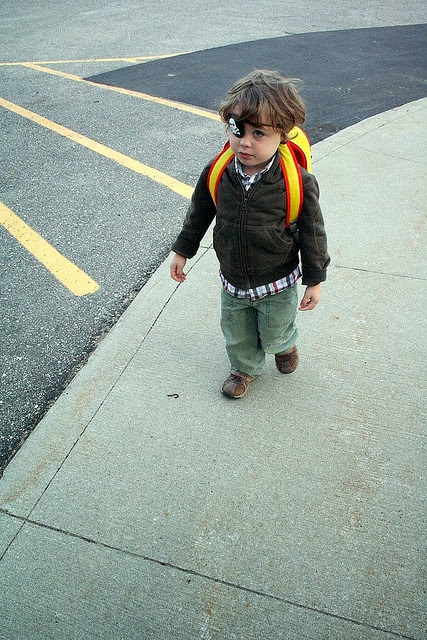 2009 - This was the year that I filled my car, FILLED my car with mums and corn stalks and pumpkins, AND big bails of hay! You can't see the hay because they're in the back. Jon was less than thrilled with the bits of hay that stuck to the carpet. It was kind of a mess! I miss my old car sometimes. It could hold a lot! 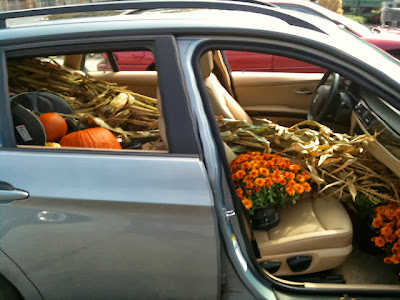 2010 - We were almost done with the renovation! It was such a long project. We moved in at the end of October that year. Every night after dinner, Jon, Noah and I would stop by to see what had gone on during the day. I came by at least twice a day. It was interesting to watch the progress. 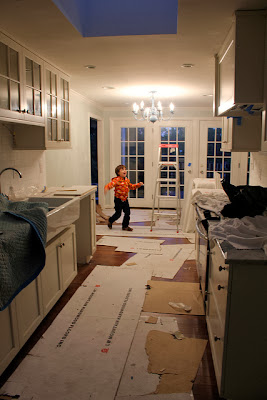 2012 - For some reason, I can't quite remember why, I was taking a portrait of Jon. It was something for work? He's photogenic isn't he! 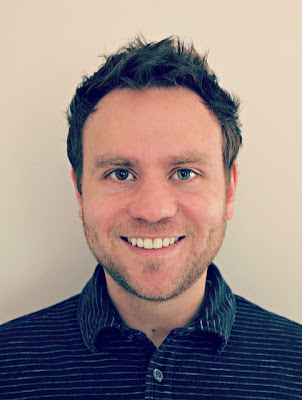 Tonight something really good happened. We walked to our favorite Indian restaurant. It was a late dinner for us (7:30), and we were starving and then we went crazy with food. I'm so stuffed. Blergh! Good thing we were able to walk it off a bit. 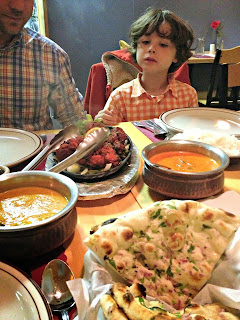 And of course, the obligatory latte' ! 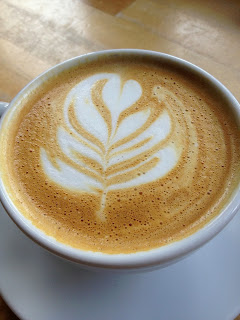 I know you aren't fishing for compliments,but I think you are stunning.
Lynn
xxoo

I think transitional dressing must be a regional thing. We just transition from bathing suits and flip flops to "more coverage" and flip flops. It is only cold here about 2 days in February anyway. ;-)

Oh Lynn, thank you soooo much. AND, thank you for leaving such thoughtful comments. So glad that you're here. :)

Hi Judy!! Oh man, maybe I should move in with YOU! Flip flops, huh? I'm polishing up my snow boots over here! ;)