Well, at least for me it is. It's September first, let's go crazy!!! That's what I thought and what I did.
I went crazy with  autumnal decor. Because like I've said before, fall is September-October-November. And that is that! A neat, little package. I'll post more later, on  the985,000 fall overkill decorations that I put up. They're looking crazy  fantastic. Which is subjective. I know.

I haven't had time to blog in the past two weeks. Two weeks ago, there was filming going on for Jon's company, which I can't remember if he minds that I blog about here. But, it was cool and took up the entire week. The second week, Jon was able to FINALLY take some vacation time. Things changed though, and we didn't end up going anywhere. I was sad. I've been in the same place all summer long. I have cabin fever.

I'm thankful for the good things from the past three months, but this has been one of the most difficult and upsetting summers I have ever had. From cats being sick, to Priya dying, to Noah and I being really sick with a summer virus for three consecutive weeks and other hard things. We also had no real "downtime" on a beach or in the woods somewhere. It's been hard. I'm ready to move forward into fall.

Noah starts school tomorrow, and although he adores his school, he's sad. There were a lot of tears. I felt terribly for him because I remember that last-night-of-summer feeling. It is not easy.

And I feel guilty typing the following after saying how sad Noah is (but he will be fine and having fun in no time), but I couldn't be happier to jump head-first into all the cooking and cleaning and errand running and parenting and housekeeping tomorrow. I feel dweeby saying this, but it is true.

I've spent the past month wondering: "What's next?", now that my five years of volunteering have wound down. I contemplated many things, from painting classes, to an Etsy store, to a three month leader training course in my favorite parenting philosophy. All kinds of things. But, I always come back to just wanting to be home, and really looking forward to doing all of the things of making this house a home. I don't mind it, I love it. It's enough for now.

That was not an easy realization, that being a "homemaker" is enough. When I really sat down though, and added up all if the different things that I do and the time that I put into them.....it's something that I finally feel ready to be proud of.  Maybe proud is not exactly the correct word, but ok with. Not feeling less worthy anymore,  because I don't have a career out in the world.

And, by the way, I think I was already sucked right back into the volunteer rabbit hole by Noah's new teacher. So, well, yeah.........

Btw- here is a book that Jon picked up for me from the library, that he thought I might find interesting. And I did! It's called Homeward Bound: Why Woman are Embracing the New Domesticity.
Now I don't feel so dorky for being "homey". I feel hip! Look, that chick even has gray hair! Omg.

Now I have to go to bed. It's too late. We wake up very early every morning. I should be going to bed at 9:00 or 10:00! I'll leave you with the a post that I wrote about three weeks ago. It's incomplete and has been sitting as a draft. I figured that it's best to publish what I have, and pick up again soon with more.

I hope everybody is enjoying this first week of FALL!!!!!

I had so many grand plans for this weekend. Those kind of plans that are like: "You're alive, so go out there and live!" You know what I mean? Carpe diem! One day was going to be Greenfield Village with a picnic and to watch the Lah-De-Dahs play some historic baseball. Another day was going to be berry picking at a farm, or a trip downtown, or maybe even lunch in Ann Arbor at Zingerman's.

I'm sure this was a subconscious  reaction to Priya dying. Death makes you want to live.....

In the end though, somehow, the weekend didn't include any of those plans at all. In fact, it was quite the opposite - quiet and uneventful.  Just what we needed.
Jon seems to be coming down with a cold, that  knocking on wood, fingers crossed, hoping isn't the same one that Noah and I had. I really don't think it is thankfully, it seems more sinus related. Noah had a long week at camp and I was still needing some downtime too. So, a low-key weekend was really a blessing.

Do you think that Friday afternoons have a warmer glow to them also? I've always always thought that Friday afternoons just....feel.....hopeful and happy. They feel different from the rest of the week!
Since Jon started a new job last fall, he's been working a bit longer hours. So Friday evening is the start to full weekend of him at home. I really look forward to that. Noah and I wait, listening for his car to pull in the driveway.

On Fridays, we usually go out to eat, or Jon brings something home. I'd been in the house for most of the day, so I really wanted to get out. Also, uncharacteristically, because I'd been busy, I didn't stop to eat much. (TOTALLY odd for me!) And by 6:00 I was feeling a bit shaky. I think it was especially from lack of protein. I've been a vegetarian for many years. I have to admit that I do not get nearly enough protein in my diet. I need to eat more beans! I had run out of my "protein lifesaver", Greek yogurt, that wasn't great. I very rarely eat fish. I don't like too. I feel terrible about it. Once in a blue moon though, I just feel like my body needs some protein and other nutrients found in fish. Last Friday was one of those times.

We ended up going to Bastone in Royal Oak. It's a nice Belgium-style brew pub/restaurant. Noah loves the kids menu there, which I will gladly indulge my picky eater in any day! I probably should have gone for the salmon, and the scallops sounded amazing, but there was some pancetta in the dish I had to avoid.. I opted for the fish & chips, which is much easier for me to deal with anyway.

It was quite good, and I felt better immediately. I wish I didn't have such hang-ups about eating animals. My heart felt sad to eat a fish, but my body felt better. Does anyone else deal with this conflict?

After dinner we took a walk around crowded Royal Oak. It's a nice small city, just north of Detroit. There are lots and lots of restaurants and bars and coffee shops and tea shops and pastry shops and  shopping! It's a creative, eclectic city that attracts many many people to it's downtown. For some reason though, when the sidewalks are full of people dining and massive crowds walking in every direction, it's a little too much for me. Too much commotion, too many people, too loud, too frenetic.

The walk was short, after which we decided to check out the action on Woodward Avenue. Have you ever heard of Woodward Avenue? It's a little famous. Well, maybe only famous in Detroit. It's the main drag running north-south. It starts downtown Detroit at the River and runs all the way out to the northern suburbs and on to the city of Pontiac. Woodward is THE road in the MOTOR city! In fact, the very first stretch of roadway ever paved in the United States, was laid down on Woodward Avenue in 1909!

The reason that we were so interested in checking out Woodward, is because the whole area is gearing up for next weekend's WOODWARD DREAM CRUISE!

This excerpt from Wikipedia sums the Dream Cruise up:

You truly see everything from model T's, through every single decade of the 20th century. Futuristic and custom cars too. And can you imagine, FORTY THOUSAND classic cars? Forty thousand! It's like transporting back in time.

A lot of people complain about the congestion that comes along with 1.5 million people and 40,000 cars lining Woodward Avenue. I get it. It's loud, it makes a mess, it's too crowded to drive anywhere.... But I really feel that once a year, the inconvenience is worth it. You can't even begin to imagine all of the sites you get to see, and you learn a lot of history, and about American culture along the way.  I can't believe that I am saying this about a crowded event, let alone a CAR event,  but it's actually really cool!

(This is where the draft ended.)

I saw two deer when I went for a walk around our local cemetery! It's so beautiful there, and sometimes I stop by to say "hello" to our house's ancestors, or to leave them a few flowers. 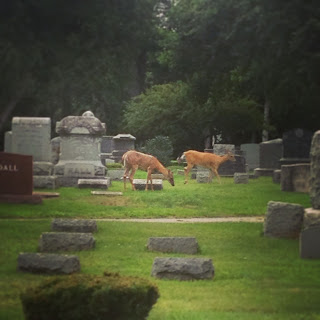 My favorite independent coffee shop at the moment. They in-house roast and I don't know what they use, but oh man! Their almond milk mochas are out-of-this-world! As if everything else that they serve. Great eats too. 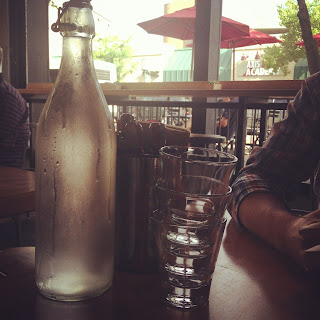 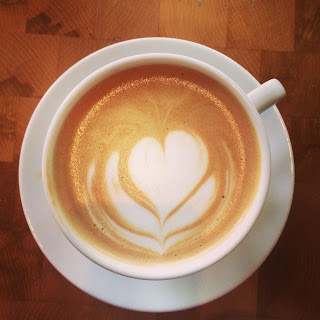 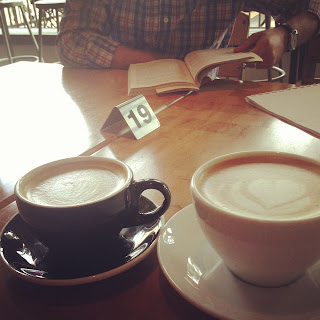 We stopped at an estate sale across the street from my parent's house. I found this pin: Priya in a pumpkin patch. I felt like I needed it. Everything was 30% off. $6 for happiness sounds like a deal. 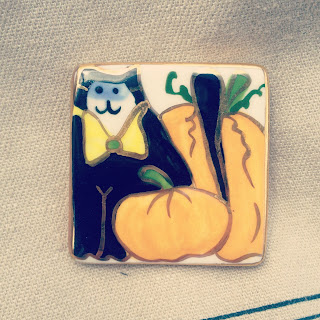 We had to find a new plant for our front porch. I thought this one was pretty, and all the flowers go on sale at the end of the summer! 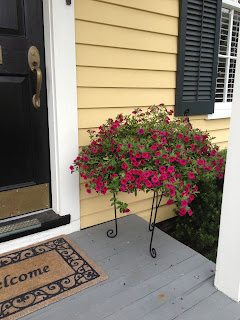 I started trying to figure out how to make a sweater with a yoke using up old ends of yarn. It began to look a little crazy though, as it got longer and too hodgepodge. Now I am trying again, but as a cardigan, and only in blue. 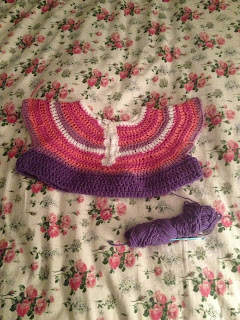 I was really having fun with the digital drawing tablet that my mother had lent me.... 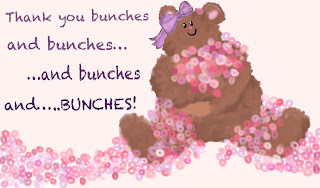 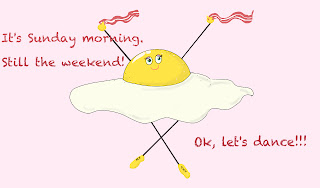 This summer, I tried not to buy any clothing. Earlier in the year, when Jon and I made our family budget, we allotted a certain monthly amount for clothing. I really tried to not shop this summer, so that I could save up for fall. I feel like you can buy in fall for fall/winter. If you try, you can find piece that work throughout both seasons, and the same for spring summer!

I love Boden. Their dresses are well made, often fun, versatile. Oh, and you can always find them on sale, or search out promo codes.  I purchased this dress and I love it! You can wear it with a nice necklace and heeled boots for a dinner out, or with a cardigan and some riding boots for the day. 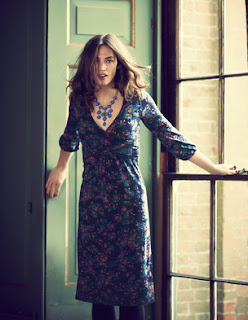 This one came in the mail too. I adored this dress.  You pull this structured looking frock on over your head! No zips! The material was so soft. It felt like wearing pajamas! The only only problem was, the neckline was a bit higher than I tend to like on me. I looked too busty. Otherwise, it was perfect. 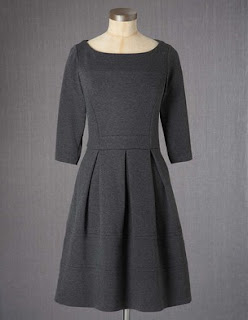