This is a little silly and ironic, but truthfully, the only reason that I was able to write the blog post last Friday, the one about simplicity and slowing down, was because Jon begged me to take the day and actually slow down!

Poor Noah came down with one of those no-fun, summer viruses. Sore throat, fever, sneezing, runny nose and a terrible cough. :(
It even ended with a blotchy rash! We went to see his pediatrician, and she told me that many summer viruses end in a brief rash. Who knew! 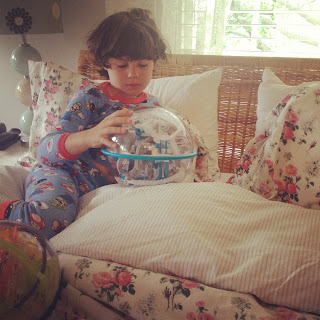 He was home from day camp for five days. I tried to keep him comfortable and not bored out of his mind.  The time included a lot of liquids, episodes of Calliou, legos, markers, and me attempting to get everything done, and giving Noah as much of my attention that he needed. It was a lot and by the week's end, just as he felt all better, I was beginning to feel exhausted and.... sniffly.

That's when Jon begged me to just stay in bed and rest on Noah's first day back at camp. A bid to ward off the virus that I was coming down with. (And now am currently coughing my way through.)

The point is, even though I strive for a "slow living" kind of life, I sometimes need external reality checks to just stop when it's truly important.  Last Friday, I needed a day where I wasn't running around or worrying about laundry or making dinner, and it was WONDERFUL. I stayed in bed most of the day writing, until I picked up Noah around 3:00. It was so fantastic. And, most of all, it reconfirmed how much I really really REALLY want to restructure my days to allow for regular writing time.

Last week I talked about Simplifying our environment, next time around, it would be great to talk about simplifying our schedules! What can we cut out or cut back on, to make time for soul enriching things?

In the meantime, I'd love to share this fun, little activity that's easy to make and perfect for some relaxing time outside with your children. 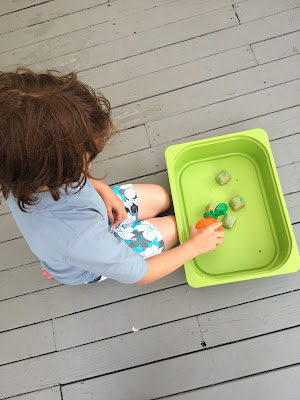 Why I did not get a better picture of the treasure chests exploding  fizzing and melting, I do not know. We have round two of this activity waiting in the freezer as I type, so I'll be sure to get better pictures next time.

All of this fun is owed to Mary Catherine at the website Fun-a-Day. I saw her post about Exploding Treasure Chests on Pinterest and just had to try it! What a neat idea!

Here's the concept, instead of freezing water in your ice cube trays, why not try a mixture of water, food coloring and baking soda with "treasures" set inside. Then, give your child a squirt bottle full of vinegar and hunt for pirate's booty!

I made the treasure chests while Noah was at camp. I wanted to surprise him with  a nice  play alternative to screen time.
First I read through the exploding Treasure Chest post on Fun- a- Day. I decided how I wanted to make my mine, and gather all of the needed ingredients.

I began by taking one of our ice cube trays and removing any ice. You can store your ice cubes in a ziploc bag and they won't go to waste!  After that. I started looking for "treasures". This was my favorite part. You can get really creative!

For Noah's treasures I used things like quarters (be sure to wash them quite well if you want to reuse your ice cube trays), marbles, glass "gems", like the ones that you put in the bottom of floral arrangements. I also found other surprises - a tiny toy lock and key set, some miniature dice, a figurine, a gold colored broach in the shape of a feather, and fun rings with giant jewels. Now that sounds like some loot! Just have fun, look around your house, no need to go out and buy.

In addition to the treasures I grabbed baking soda, water, and food coloring. You will also need some kind of tub or bucket to melt your treasure chests in , and any kind of bottle for vinegar, which I will talk about in a moment. 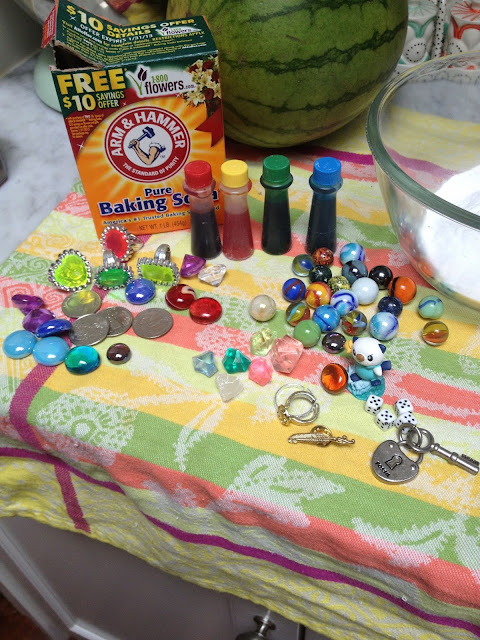 So, treasure chest are often brown, right? Well, here's where I made my biggest mistake, I should have stuck to Mary Catherine's instructions and made the chests BLUE. You'll see why in a minute. Here's how I made brown though, by mixing red, yellow, green and blue food coloring into some baking soda and water. it was fun......... 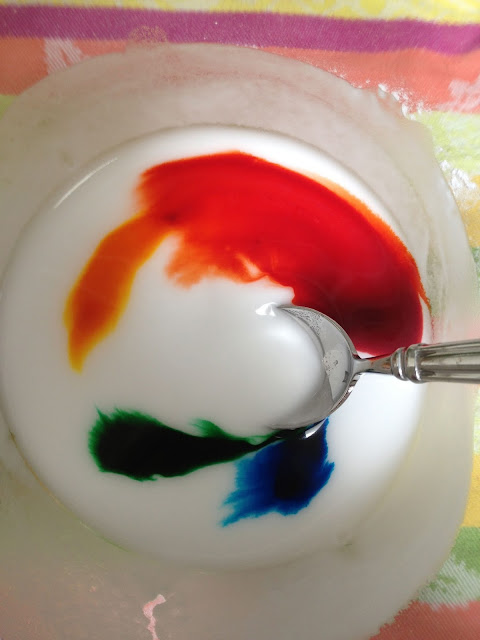 Ta dah! Treasure chest goop! The original post calls for 3 parts baking soda to one part water.  Mary Catherine also used Jell-O powder to color her chests, which I think is so cool! I will definitely try her version next time. You'll want your mixture to be the consistency of paste. 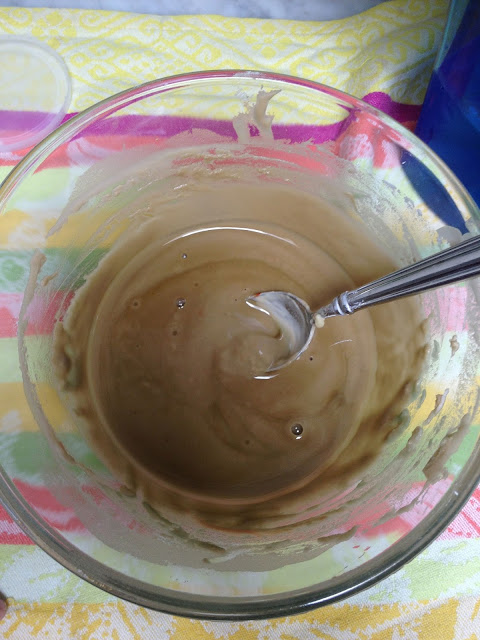 Now comes lots of fun. I used half or so of the mixture and filled the ice cub tray 1/3 -1/2 full.  Leave room for treasures and more mixture later! After filling the bottom of each "cubicle", I popped the tray into the freezer for about a 1/2 hour. When your first layer sets, it's time to add the booty! You can tuck a surprise into each cube, or several surprises. It's your choice. I arranged mine like this......

After your treasure is ready, pour one final layer of your mixture on top. Be sure to cover everything, and try to fill the each reservoir to the top . Put the tray back into the freezer. I left ours in for several hours. 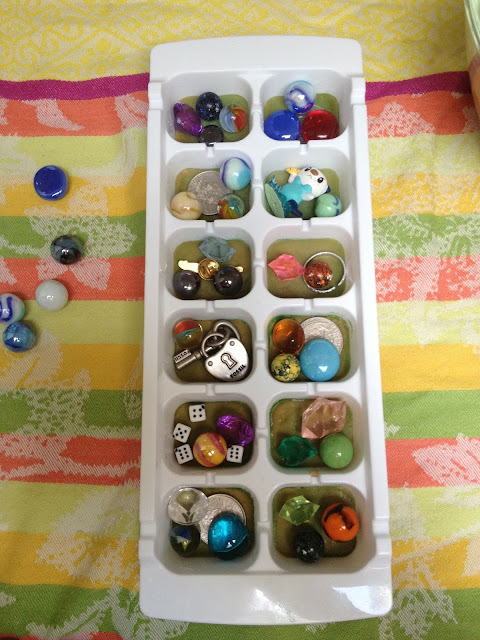 Next you'll want to prepare some kind of tub or bucket or even an old bowl to play with the treasure chests in.  You're have to not mind putting vinegar and food coloring or Jell-O powder in whatever you choose. I used one of our Ikea TROFAST Storage bins. They're just $3. THREE DOLLARS! And work perfectly.

You'll also need any kind of spray bottle or squirt bottle or eye dropper to hold vinegar in. For younger children, you can go ahead and pour the vinegar in for them, but if your child would like to do this himself or herself, find something you feel confident letting them use.

FINALLY, a use for that old pumpkin bottle from the cider mill, that he hasn't let me throw out! :) 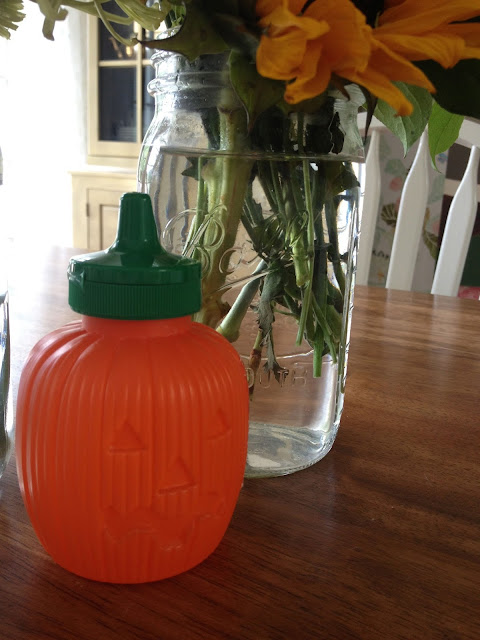 And here's where the fun begins! When Noah came home from camp, one of his friends came to play. I  gave each of them a plastic spoon to "excavate" with, and we headed outside. (This activity could be done inside, but I strongly recommend that you play outside if possible. Then you can hose everything down when you're done!)

I popped a few "chests" out of the ice cube tray, put them in the bin, and gave the boys the vinegar. Before long, everything started to fizz! 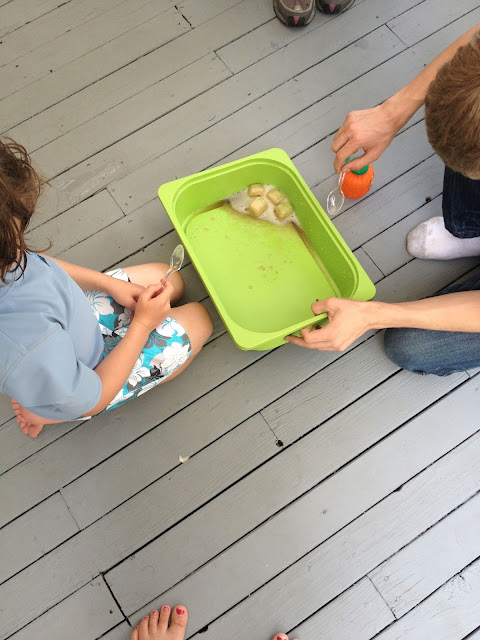 And slowly........ treasures began to appear.  The boys used their spoons and more vinegar to make the treasure chests fizz and melt. It was perfect for that hot summer day. 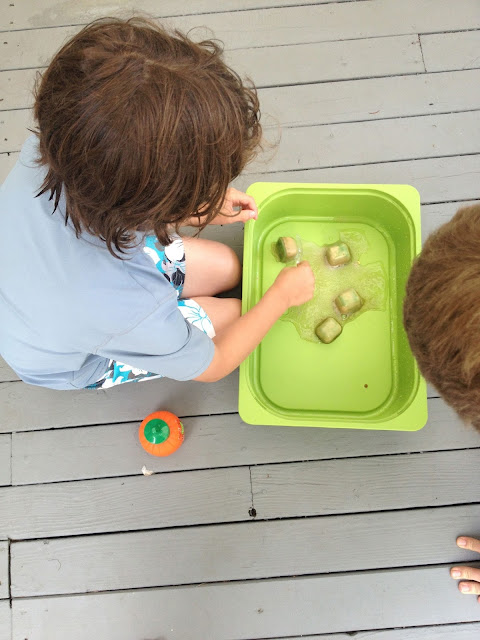 This is why I shouldn't have made brown chests. It just makes for muddy water. I say, follow Fun-a-day's lead and go for refreshing blue treasure chests instead!

The boys collected their treasure and I washed them off.
And there you have it! 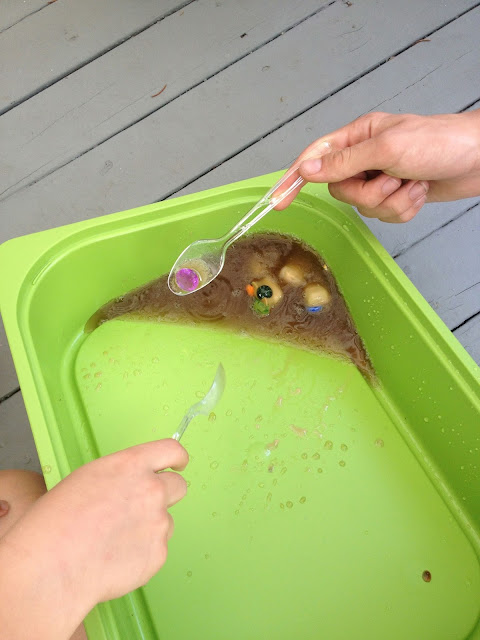 A simple but fun activity. I can't wait to play some more!

While you might be busy, running around and doing fun things to.....er....slow down and simplify your life, it's important to always remember to also take the time to rest when you really need it! Like Hector. 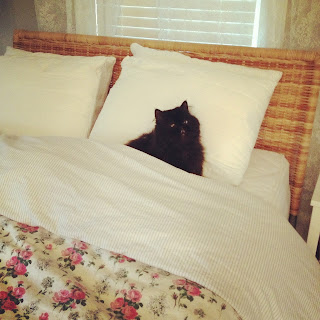 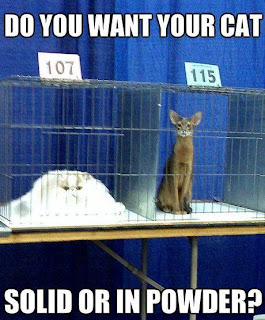