Yesterday morning Noah watched from the back windows of our cozy house.  I ventured out into the backyard. The air was freezing and had a crispy sting to it. Crunch, crunch, crunch went the ice crusted snow, under each boot step.
I'm ready to start with the bird feeding and watching again. We'd been getting some Downey Woodpeckers at the suet feeder for a while, and it was time for another suet cake. So why not start with providing the full meal again. 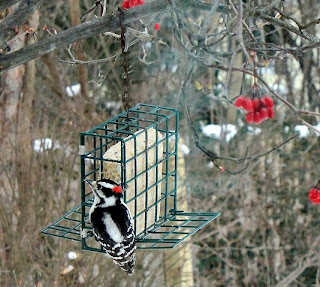 I replaced the suet cake, re-filled the hanging seed feeder, and laid three trays with various seeds, nuts and some cracked corn.
Then, I hurried back inside.

We looked out from the family room. It has two walls of large, floor to ceiling windows, and you watch from above, over the yard and down the patio.  We waited. Noah was quickly consumed with his Legos, but I sat still on the couch, birding book by my side, camera in hand.

(The Legos that are more interesting than birding to an eight year old boy.) 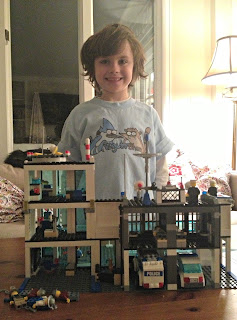 As if on cue, a bird appeared. A robin, eating some red winter berries just outside the window. (Today, only a handful of those pretty red berries still sit on the tree.)
Then the Downey Woodpecker came back, a male with his tiny, red hat. Then a female Downey. Some more robins, and I could hear other chirping and calling. "It's a buffet! It's a buffet!" I imagined them saying.

Then, like a dark, rain cloud slowly rolling in, a near by tree collected a black looking shadow. European Starlings, tens and tens of them. Coming in closer in their great pack! The European Starling is known as an invasive bird species. (I don't mind them though.) They were not native to America until the mid- 1800's, when it is said, a Shakespeare enthusiast brought 50 Starlings from England and released them in Central Park. It was part of a plan to introduce all of the birds of Shakespeare's writing to the United States. Isn't that an interesting story?


(This is a European Starling.) 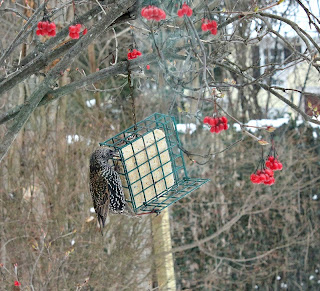 Yesterday was a hardy bird watching day. Among the Starlings, the Robins and the Downey Woodpeckers, we saw one of my favorites: the absolutely adorable Tufted Titmouse. He looks like he's wearing a tiny gnome hat. There were also our ever visiting Cardinals, I counted 7 or 8 today. I just love them, and their vibrant red against the super-white snow.  We saw House Sparrows and Dark-Eyed Junkos, Black Capped chickadees, sweet Mourning Doves and even....... Red-Breasted Nuthatches! These little Nuthatches were new visitors, at least to me, this fall. They look so similar in some ways to the Black-Capped Chickadees, that I bet we've had them for a while, I was just never sharp enough to notice. I like the Red-Breasted Nuthatches because they don't seem to be afraid of me. 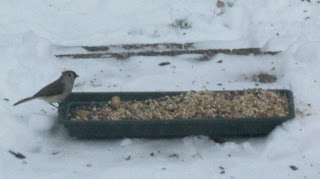 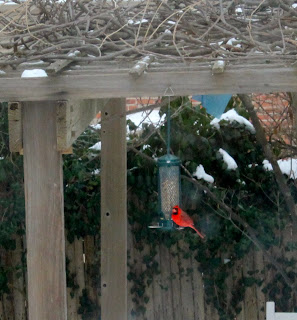 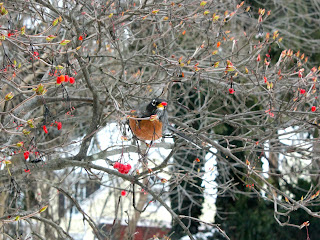 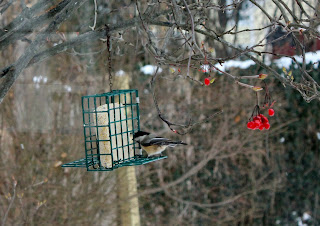 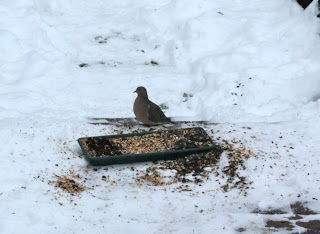 But, the most exciting thing from yesterday, the most wonderful thing, is that I saw THREE totally new birds in our yard! A rather plump, brown Carolina Wren came right up to the window and perched itself on our suet feeder. I was so excited! I really wanted to grab the camera, but, I remembered something that I had read earlier in the day....when in doubt, don't take your eyes away, just sit very still and remember every detail that you can. I was lucky that he stayed a bit, and captured both the Carolina in my mind, and with my camera. It was fantastic! 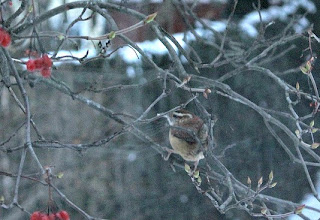 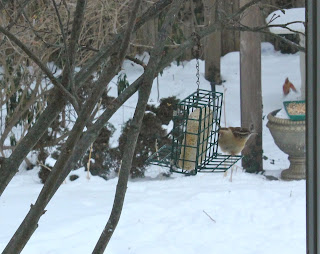 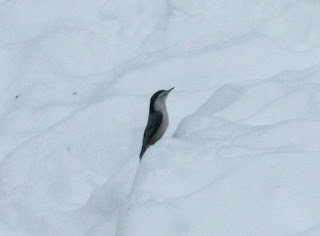 And beautifully, we watched as an American Goldfinch fed at the seed feeder. He was sooooo beautiful with his yellow coloring.

(Here he is, the American Goldfinch!) 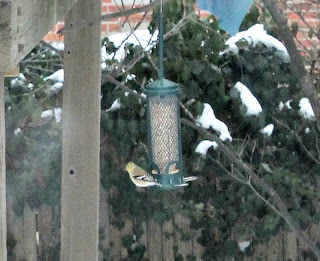 Noah and I walked to the library yesterday . One of the things that we brought home was a bird watching book about the birds of Michigan. I think that I now need some binoculars. I don't need anything nice or extravagant, just something that will help me see out, over to the feeder.  Jon has been offering to purchase me a zoom lens for my camera for years now. I just might take him up on that sometime soon.

This morning I woke up to find the Service Berry FULL of Robins. I've never seen that before! I also saw the Caroline Wren come back later in the morning, AND....I spied two more American Goldfinches! It was fantastic!

All of those bird sightings sealed the deal, I had to run out to the store for some more seed and suet. Today I picked up a second suet feeder, a big box of suet cakes, a seed bell, raisins and some nyjer seeds. I hung the suet feeder and the compressed bell-shaped block of seeds. I also put out some raisins and re-filled the seed trays. Then, I went inside to make two nyjer seed feeders for the Goldfinches.

You take an old pair of tights and cut off each leg. Fill both with nyjer seeds. Tie a knot at the top. Then I used some yarn, combining four strands for strength. I tied the four parallel stands to the feeder, and then double and tripled knotted the tights around my string. Next, all you need to do is hang your feeders outside, and snip with scissors, teeny tiny holes.....just a handful, so it's easier for the birds to get their seeds out. That's all there is to it! 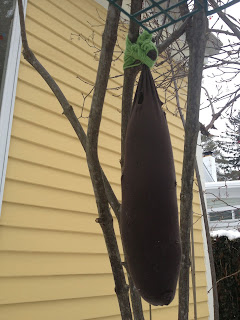 The only thing that has rattled me in the past two days of birding was from this morning. Out of nowhere I heard the call of a hawk. This was not too surprising, because I have seen quite a few hawks around in the past. We live right along the top edge of a small valley. At the bottom is a little river and some woods. It attracts lots of wildlife, including hawks and Blue Heron.

The Red-Tailed Hawk was making it's screeching call, and all of the little birds scattered. Some were flying and soaring away as the Hawk came into view. I was really afraid for their safety. The Mourning Doves sat clueless, still munching away at the bottom of the yard. Did they hear him? Do they care? Suddenly they took off in a puff! All of those Mourning Dove wings making their signature squeak. 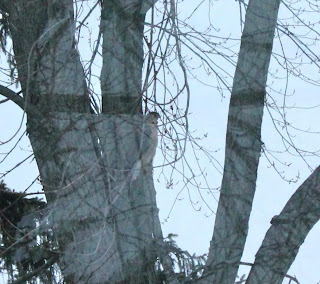 Everyone seemed ok, but the birds stayed away for a good hour or two. I am going to read up on Hawk protection!

I find it funny, how into "birding" I am. There is just something so sweet and peaceful about the birds, and it's fun to look for new, colorful visitors to your yard. Also, when I'm watching the birds, thinking about which species they are, or quietly sitting and observing, I'm not worrying. Which, I will talk about some other time, but if you are an anxious kind of person, bird watching really is a nice way to step away from the worry.


(Also keeps the cats from worrying. They like watching out the windows.) 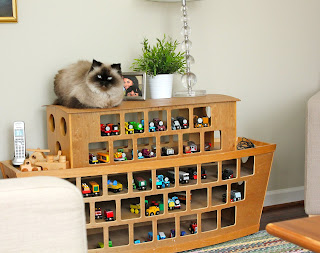 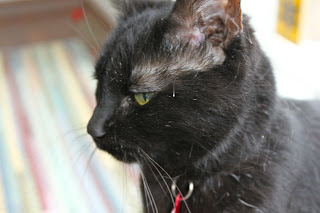 ****EDIT!!!!!!  Something to worry about! I am NOT JOKING. As I was just sitting here proof-reading this post, a BIG HAWK landed THREE FEET AWAY FROM ME....just outside the window I am sitting next to, on the deck steps. OH MY GOSH!!!! URGH!!!!! I don't want to put these sweet, little birds in danger. He was big, and his beak was a perfect hook! Now I'm quite worried. Hawk research, stat!
at January 03, 2013