Day Two! This was a super exciting day for Noah. He's been waiting alllllllllllllll fall and all winter and all spring to go back to the pool. He's been so patient and today was the big day. I wanted to start off summer on a good foot, so I planned to take him to the outdoor pool at the "far away" branch of the community center/fitness center that we belong to.

We've somehow misplaced our membership IDs in the move. I know that I'm all perfectly organized and ALWAYS on top of things, of course. So how in the world would these three cards go missing? (And only like a million other things if I'm being HONEST.) Perhaps they're lost on Mount Basement.

Jon rolled in the door at 8:00am this morning. He had taken the red-eye home from Las Vegas. This was his 39th, THIRTY-NINTH trip to Las Vegas in eight years. Can you imagine!? There are apparently a lot of shows and conventions held in that sin city. While I'm used to Jon traveling now, I never get over how exhausted it makes me. On school days, like earlier this week, I'm always awake even before the alarm goes off at 6:00am. It's just to give me time to get up, get myself ready, Noah up and feed and out the door by 8:00. This is even after I do a ton of night-before prep work.  It's hard but I'm sure many people have it much much more difficult. And, Jon doesn't travel a ton, so it's ok.

After a couple of hours, Jon was back out the door and to work. Noah and I needed to go down to the closer branch of our community center, which is still about a 15-20 minute drive away. We were going there to have our pictures taken for our new IDs.
While I was getting ready to leave, Noah was playing with his really neat little building toy, Flexeez.
He came out like this and said he was ready for his picture!  Ankle cuffs, wrist cuffs, a belt, a collar and a crown.
I thought it was neat. More power to you Noah. Take that picture boy!

But right before we left he changed his mind and only left the belt and wrist cuffs on. And then raced into his room to grab a pair of red fleece mittens. They were "fireball gloves". SEE, it's true. Bordom = creative play. 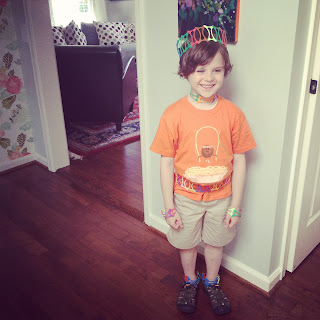 At the community center we ran into several old friends.
I've been going there to hang out in the women's lounge, I mean work out since 2002. With an eight year break in there. I plan to go back. Really, I do!  The center is full of bubbies. They were so sweet and great and always fawned over Noah, Jon and I. They were good to me as I got ready for our wedding and they were great to me during my pregnancy, and they all came out to support us after Noah's birth. They were amazing. I miss hanging with the bubbies. Maybe it's time to take up water aerobics again.
(Once I persuaded Jon to come try a water aerobics class with me. The bubbies called him "Merman".  Like, you know, a mermaid, but a guy. Merman.)
Also, Noah is named Noah, partly because I was in the water at those classes almost every weekday morning during my pregnancy. It was so nice!

Later on, after pictures and running home for lunch, we pulled into the parking lot at the other center, the "far away" center. It is about a 20 - 30 minute drive depending on traffic, but definitely worth it.  This place has a gorgeous, very large outdoor pool, an very large indoor pool, and a third pool, which is a 0-depth entry and is for children's.
He was ready and SO excited! :) 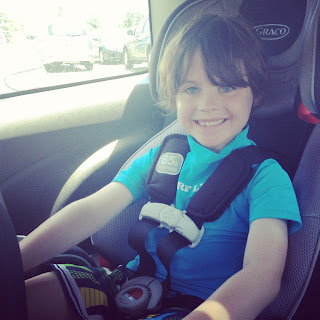 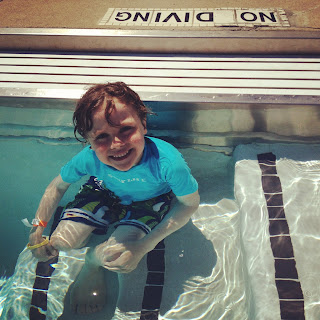 Finally, around er.....dinner time. I was like....Hmmm....maybe we should think about head home soon? But of course, not before his ceremonial snack bar stop. This year he got up the courage to get in line alone, order his ice cream and pay for it. Good job Noah! 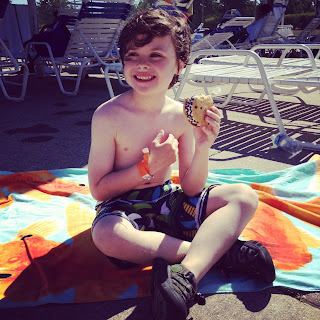 Oh, and on a totally random note, we also went in a wind tunnel before getting in the pool. DON'T ASK, I seriously have no idea. 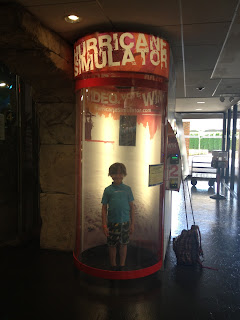 Aaaaaaaaaaand he's out! This is how you know it was a good day.
(And NO, I am NOT driving and using Instagram. I was completely stopped.) 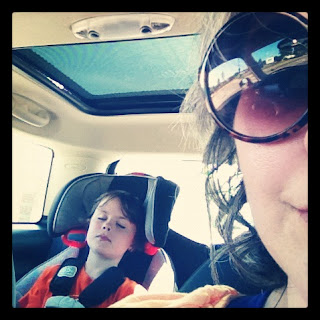 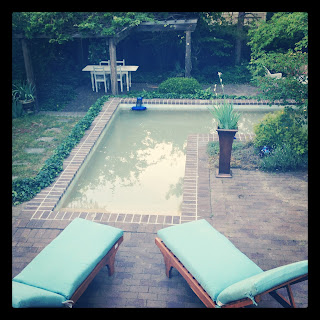 The backyard renovation or whatever you'd like to call it, has been a slow process. We have a long way to go, but I think it's looking pretty ok! We finally were able to get a couple of chaise lounges to put around the mini-pool. I have a feeling this is going to change everything. 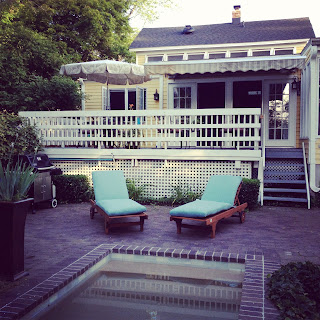 Tonight when I was snapping these photos, I had the same thought that I've has a thousand times since our move back in October. I can't believe that I live here. I feel sooooooooooooooo thankful and appreciative, but it feels like a dream! I feel just like Shirley Temple in The Little Princess. When she wakes up and finds her little, cold attic bedroom transformed into beautiful, warm and wonderful room. It's just too good to be true. Pinch me, I must be dreaming!

Speaking of dreaming, get a load of HUSH, a "womb shaped" sitting and sleeping pod. I'd like a HUSH.  I could hide out in there. And I would order one with a lock. " Sorry, can't cook dinner, defective lock! Stuck inside my HUSH".
(Thanks for the link Design Mom.)

Ok, I'm ready for bed. The endless possibilities of summer! What will tomorrow bring?
at June 14, 2012

I love your house, too, even via Internetdom! Such a neat place from what I can tell!