Before summer vacation started, I was full of anxiety and stress over what the summer months would bring. I really really enjoy being a "housewife", as lame as that might sound to some of you, but nothing makes me happier than keeping the house and the family going. The stretches of time, Monday through Friday from 8:00am-3:00pm were my cherished "work hours". My 35 hours a week to get it all done before the house became loud and I had to settle my attention on the little kid or the husband or the dinner that needed to be made.

A man without a shirt just walked past my window. Interesting.

For those 35 hours each week though, I gladly went to work. The house swept and vacuumed, the bathrooms and kitchen cleaned. The laundry washed and put away, the flowers and plants watered. The dinners prepped, the snacks baked. The endless daily errands ran, the meal plans made. The groceries procured. The presents for family and friends bought and wrapped. The paper work, the pet work,  the toys put away. The volunteering at Noah's school that means a lot to me. These things and many many more, they all belonged to those five days.

I was worried that with Noah home in June, July and August, I'd get almost nothing done. That it would be frustrating, and the house would be a mess and cupboards kind of bare. That I would end up a constant playmate to my seven-year-old only child, and that there would be daily battles about him getting off the computer!

I'm not good with change. (I was given THREE copies of "Who Moved My Cheese" when I graduated from college.) Especially change that would disrupt my entire work week as I know it.

But you know? So far, it's been pretty ok! Noah's a tad more self-sufficient with his play when I have things to do. I make breakfast, lunch and dinner and snacks and do the clean-up for the most part, unless Jon's around, but I've taken the pressure off myself to come up with super nice meals or complicated dishes. I think this will be the summer of breakfast for dinner! Lowering the bar, why have I not thought of this before!?

I've decided to worry less about getting it all done, and focus more on letting go.  Let's go to the pool, let's stay all day. So what if dinner's not on the table by 6:00? We'll survive. Dust bunnies all over the place? Ok, just don't look at them.  I'll always have next fall to be a control freak again.

Did I mention that we won the neighbor lotto? Our neighbors on both sides are just the nicest people. We really lucked out. You know that neighbor thing, you just never know. Neighbor right and neighbor left, all delightful. Over the weekend, we were given this big, wooden Noah's Ark! It's even cooler and larger in person. A perfect place to store your toys in. Noah is using it as a "Marvel fort". I asked him what that means and he said it's about the Avengers. He must have seen Marvel as in comics on an Avengers commercial. I know it's inevitable, I know.....but I was so please with the fact that Noah has never gotten into the mainstream, evil-fighting, in my opinion violent boy stuff. I know it's only a matter of time, that soon he might want x-men or Star Wars or Transformers or Avengers, but I hope he sticks with Lego building and book reading for a while longer. 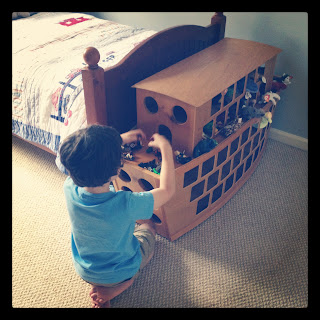 Our family has a problem with screen time. It's too much!  I snapped this the other day. Noah was building in Minecraft, Jon was reading Slate, and I was surfing the web. It kind of made me sad, but also motivated to say: "Let's go somewhere!", so we did. 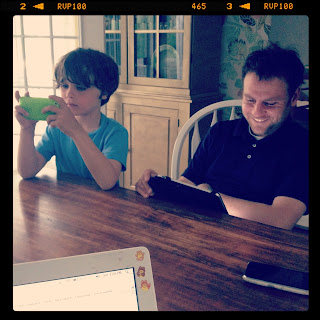 Noah is enrolled in "Clay Camp" for the next week and a half. It's essentially an hour and a half long ceramics class, and so far seems wonderful. We've worked summer after summer, to help Noah become more accustomed to separating from Jon and I. He's struggled with separation, it's held him back from trying things that he really would like to do. So little clay camp seemed like the perfect baby step towards bigger things, like all day Lego camps that his buddies are doing. 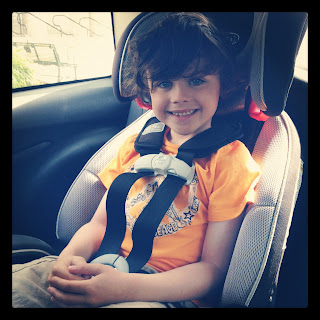 We visited the new automated book return at our library. It's super exciting. For seven year olds. Ok, kind of for me too.
You put the book in........ 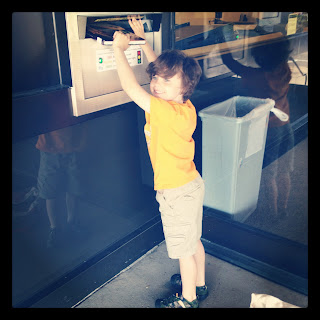 And then watch it travel up a conveyor belt, where it's sorted into the correct bin by the computer!
I used to work here in the circulation department years ago. I'd take the huge bin from this very spot, and go through and sort all the books. This must help save some time, and it's cool to look at! 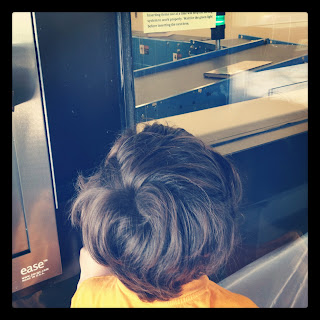 Yesterday, some of our very, most favorite friends came over. My friend Kellie came with her three children before dinner time. The kids played and we chatted. This is "Baby Sadie", she is Kellie's youngest and it is a well known fact that Baby Sadie is one of my favorite not-so-baby, babies in the whole wide world. I like Sadie, we get each other.
Sadie wore a new dress yesterday, and can you guess why Kellie bought it??????
To match my "waterfall" shower curtain of course!
How great it that!? Like the greatest!  :) 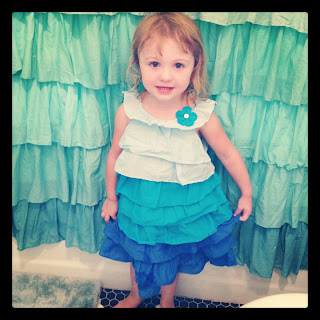 Kellie and her kid crew came with homemade, gluten free Pecan Sandies made from Almond flour! They were absolutely DELICIOUS. This is the almond flour cookbook that Kellie uses and recommends. It looks fantastic. 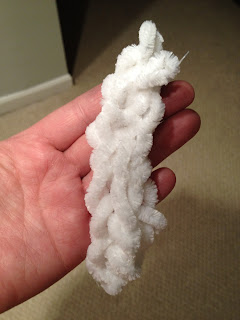 Kellie's middle child Lucas, another one of my very favorites, learned to finger knit and made me this! This....this....this....first aid puff! Thank you Lucas!  That was SO thoughtful of you. He says if I fall down and get hurt, I can use it to sop up ALL the blood! What a great kid!

So this living in town thing has come with a great perk. Our friends actually come over! For example, Kellie and her family were meeting her in-laws for dinner in town to celebrate her eldest daughter's birthday. I invited Kellie and the kids over to play before dinner. When the time came, they just walked out our door and over to the restaurant. An hour and a half later, they came back and hung out with us around the pool.  It was fantastic!

We get many knocks on our door and horn honks as people come and go. We're kind of in a lot of people's "flight path". Before, our old house was tucked away in a neighborhood and we had a lot less visits. I guess we'll never be lonely now! :)

So you know how I said that Jon is like the Dad in "A Christmas Story", but only obsessed with the pool filter, rather than the furnace? We yeah, so last night, after our friends left, after a "swim" session with all four kids in the mini-pool for an hour, I hear a SHRIEK! Come from the backyard.
"OH MY GOSH" yelled Jon, in a surprised (not angry way.) More like fear. Like he just saw some kind of bad omen or something.
"What! What! What's wrong Jon!!!???"
And then I saw that he was holding a pool filter full of trapped toys. And I was like....
oh.
ok.
Mooooooove along......... 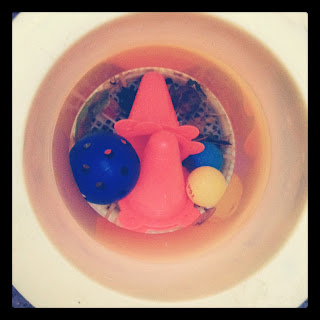 (*By the way, Kellie and I, well maybe just myself, but Kellie seemed psyched about it too, came up with a great idea on how to make the pool water blue-green like we originally wanted. Food coloring! The pool water just filters around and around, right? A few bottles of green and blue food coloring and voila! What do you think? I can't wait to surprise Jon. He'll think that I skim coated the pool with new plaster!)

Have the earth's magnetic poles begun to shift!!!!??
My cats were actually GETTING ALONG!
WHAT? 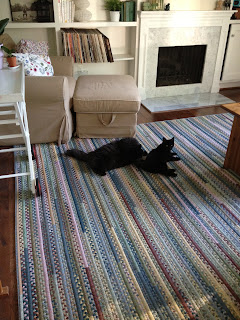 B-the way. Which is how I like to say "by the way", I just want to share with you an idea for a cheap and easy summer "uniform". I'm not one for "uniforms",  I love to get creative and mix and match clothing, and especially like to recycle old things into new! But...for the past week, since school's been out, I've really been needing some play clothes with all of the outside stuff, and pools and sunscreen. I don't want to ruin my nicer things!
I've found some tee-shirts that I just love.  from Ann Taylor Loft. The colors are so pretty and the smocking around the neckline is a nice amount of girlie. They also hit the arm in what I think is the best place, kind of a cap-sleeve,  if there even is a best place.  (Believe me, I'm sure it looks just "meh" on me, but better than cutting my arm off in a bad place.) Right now they're on sale for $15, down from $29. If you don't make this sale, no worries, Loft ALWAYS has sales. In fact, I purchased three of these tees for $35 last week.
I pair these shirts with the following super simple, soft  jersey knit skirts from Target. They're just $12.99, even at times on sale for $10! They come in black, gray, coral, turquoise, purple and royal blue.  I know these outfits aren't the most exciting, but you can certainly dress them up with fun jewelry, scarves, belts and shoes. They're great pieces because you can throw them in the wash. 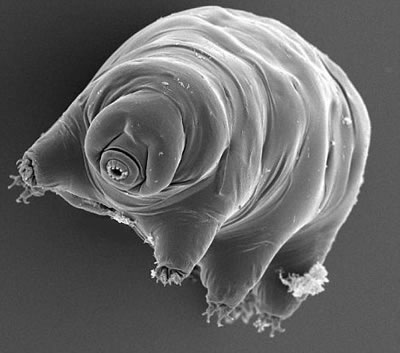