Tonight after dinner we took a short walk. But before I get to the walk part, let me talk about dinner. Never, ok ready, NEVER in my life have I ever made a dinner that my child has eaten. He has food issues. It's hard. Unless I make a hard boiled egg, or plain butter pasta, he really won't eat much more than a few spoonfuls, if that. Noah will eat steaks and hamburgers, but...I don't eat, nor really know how to cook red meat. I've tried, but it's never been great. Usually I just send the boys out to have some kind of red meat party on their own. I'm trying though, I really am.
I'm not supposed to stop offering Noah new foods, or old foods that he has refused to eat in the past. Tonight it was spaghetti with cream sauce, salad and perlini mozzarella with grape tomatoes. You'd think a kid would be cool with pasta and cream sauce. Um not really. Not basic enough. Whaaaaat? He refused to eat the mozzarella balls too, because OH MY GOD, olive oil and a hint of balsamic is ACTUALLY TOUCHING THEM THINGS! So, once again, he didn't eat dinner. Sigh.
Dinner. I love love LOVE my new kitchen. So much. But, it still feels a little foreign and cold. I need to hurry and do the final decorating. Most of all though, I can not wait to start cooking again! Real cooking, not this: "I'm on a tight budget this month and have no time so I'll make spaghetti with cream sauce" kind of thing. I just don't have the time yet, to really roll up my sleeves and cook. Once the move is over, that'll be great. Maybe I'll make some warm, homemade applesauce with cinnamon. That sounds just about perfect. "Miriam's Kitchen" by Elizabeth Ehrlich
In the meantime, I think I should start reading Miriam's Kitchen again, before bed. I just found my old copy today, lying among a pile of books, waiting to be boxed. It's a wonderful quick read, a memoir by Elizabeth Ehrlich. Ehrlich weaves stories of her life and that of her mother-in-law Miriam's. It's about how their experiences relate and differ. Each chapter bringing in food tales, and a dish from Miriam's kitchen. There are wonderful old Jewish recipes in this book. It makes me hungry just thinking of it!
Speaking of cooking. O.M.G. is it November already!? We have a Thanksgiving to host! This means that not only do I need to finish up putting together the house, but I also have to plan the dinner with Jon, decorate with GORDS baby! KAPOW! AND, then there is the cooking part too. Oh! And oh.... well, so ....our dining room table? Well, yeah, it's like, NOT PAINTED AND STAINED YET. You, yes you, Mom, Dad, friend, anyone want to come help us finish that er....project?
The table weighs 200lbs. Oddly, it really does. So, I think there is no carrying it outside to pain. I think we need to paint inside the kitchen. Omg. 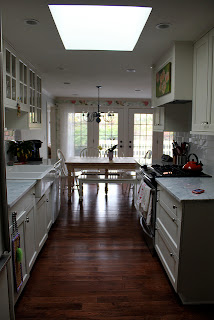 This is true. Hector the cat. I love him with all of my being. I love everything about him, from the eye goo, to the fish breath and the dreadlocks he leaves lying around. But the dude doesn't listen. I say: "Hector, why don't you consider not tearing the new slip cover on my living room couch into smithereens. What do you say old buddy? Why not just avoid the whole thing all together? And while you're at it, perhaps you could stop going crazy while ripping the wicker foot board of my bed apart at 4:00am every night. K. Thx".
And the strange thing is, he never listens! It's still happening. Even a simple: "Hector, come here"! No response. It's almost like...... He doesn't understand ...... ENGLISH.
My favorite painter who works for the company that painted our house is named Carlos. He's a nice guy. Carlos is from El Salvador. He told me last week that his younger brother is also named Hector. Hector Alexander! So, right then and there on the spot, I changed Hector's name to Hector Alexander, in honor of Carlos' brother.
I asked Carlos to do me a favor. I just didn't get it, Hector never responds to anything I say. I thought maybe, maybe what's really going on is that Hector doesn't know English, but in fact, only knows Spanish! So, I had Carlos come inside and speak Spanish to my Hector. He gladly did it, and it was awesome. I learned a few words too. Hector, not surprisingly didn't bat an eyelash, and instead quickly ignore Carlos in favor of parking himself in front of the pantry. At least I tried. 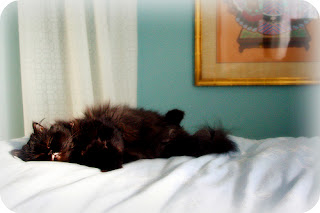 Which brings me to the walk. I'm sorry, it's too late to talk about the walk. I'd better go to bed. What was so great about the post-dinner walk was that we got a stroll in, Noah was able to ride his scooter, I went to the bank, and we stopped in at the library, all in the span of thirty minutes. It was great. It also got me thinking some more about shopping local, and about the whole concept of why we give gifts over the holidays. I'm constantly battling in my head over whether I should make little gifts or buy them. One point that I'm really into thinking about these days is the concept of: How big/much/expensive should a gift be? Can a single, well picked item, no matter how small or inexpensive be enough? I always worry with my family and friends, that I might seem, well, cheap. BUT... at least for me, nothing would thrill me more than a little personal token, like a piece of old pottery or something whimsical to set on my self.
at November 01, 2011

GREAT blog! I wish I were closer so I could come and see this beautiful new home of yours! (And, truthfully, I'd love to give Hector a hug.) <3

We always try to give "local" and have found a great local place to get honey - which our "givees" have all really appreciated. It has proven to us that sometimes it is more the thought and effort that is appreciated as opposed to the outright expense. P.S. We would love to see you guys!