Really, I just don't know where to begin with house posts. There're so much to talk about and a lot that has already happened. I think what I'll do to eventually get caught up, is oscillate between renovation posts and writing about the history of the house and other non-construction tid bits. There's so much to tell about the people who built this little home, and lived in it over the years. I'm just in love with their stories and imagining life here so many years ago.
So may I present to you without further adieu, the kitchen! (Well, so far.)
When we first bought the house, the kitchen looked like this: 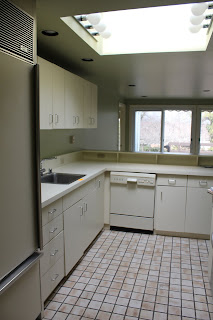 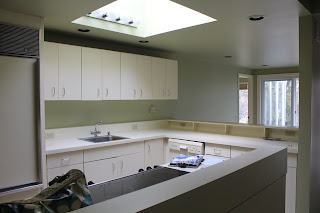 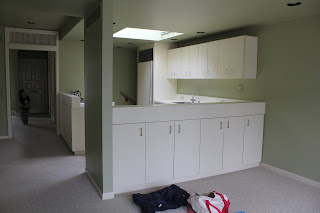 Pretty much "Meh". Right? Not the worst, not the best, but kind of 1981-ish. Actually, it WAS installed in 1981 because I have the records! And you just thought I was good at guessing kitchen age didn't you?
This is Noah before his haircut. It makes me think, why oh why did I cut your hair!? Your beautiful elfin hair! I miss you shaggy hairdo. I hope he grows it back out. Just saying. 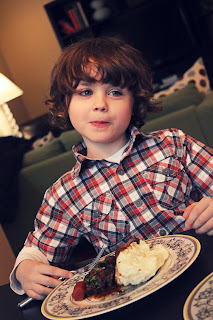 Ok. Sorry, back to the kitchen. This is what the kitchen looks like now. It's kind of nasty. 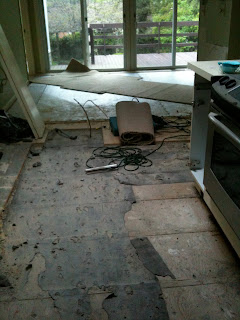 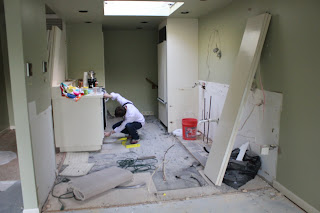 Wait, here's one from today that's even nastier. 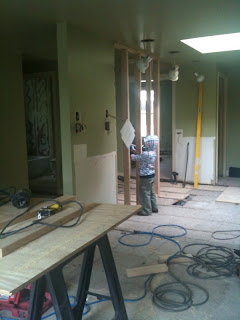 So some crazy went in and ripped out all of the cabinets and the appliances and the lighting fixtures, all of the flooring and a wall. WHO would do that !?
It's ok though, because our builder (who also happens to be my wonderful aunt) got us a most stupendous, fabulous deal on Wood-Mode Cabinets because everyone was a bit skeptical about our Ikea cabinet plans. I love Ikea, but I guess the others will last a long, long time.
Here's the plan: 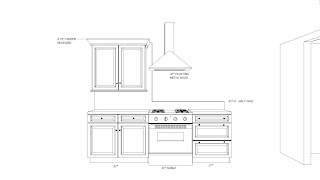 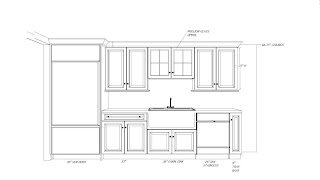 Well, kind of. So we ended up putting in a full wall behind the stove, and adding an upper cabinet to the right of the hood vent. Also, you won't see the vent, we're boxing it in with cabinetry. Then, I've changed the two cabinets to either side of the sink to glass fronts.
You guys, be honest. I mean it. If this kind of stuff is a complete bore. Please please let me know. I don't want to go on and on about details. I think some of my family might enjoy hearing the updates (Hi Mom S.!), and maybe some interior design inclined friends, but otherwise, let me know if this is just rambling. Ok!
There's a strange sky light, but it really brings in so much nice light. We're closing it up a bit because right now it's huge. Hopefully a bar will be hung up there and then we can hang a little chandelier from it. Yeah! And I hope to paint the room a pale pale lilac.
Look, it's ma sink! Oooooh you little country sink you! I love you, I luuurve you sinky. It was such a deal too, AND on sale! I'd been eyeing this little Ikea gem for some time, and for a reason completely not understood to even myself, I thought it was called the "Double Jumbo" for the longest time. You know, because of the two large sides/bowels of the sink. I read the Ikea name really quickly and didn't slow down to figure out the pro-nun-ci-ATION. Now I know it's REALLY called the Domsjo. Like DUH! The Domsjo. 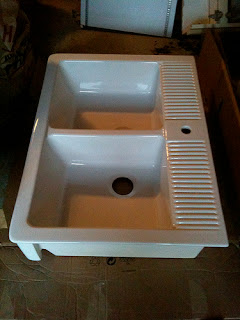 Here is an awesome picture of Noah. He got his first pack of Spongebob sweatbands. There were four, and now he can also wipe the sweat off of his forehead with his ankles to. Thankfully.
Anyway, we're taking down the wall of sliding glass doors in the kitchen/dinning area, and replacing them with french doors. But, not these french doors. Although, we thought it was these, and Noah got all attached to them, and then we had to break it to him. Not this set of doors buddy. 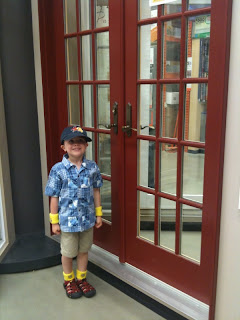 So really, you know, that's the kitchen in a nutshell. Like, every single thing needed a little update. Oh wait! Except...except! We're keeping the fridge! They left us a very nice Sub-Zero fridge. That um....well, of course....ur......BROKE. And oh yeah, that's right, it cost as much as a new fridge to fix it. C'est the kitchen vive!
at June 16, 2011

I personally LOVE the updates on the house...I love stuff like this - it is like a TLC blog!!!

Noah is so stinkin' cute!

I can't believe how big Noah is...and he is so cute! Looks like this is such and exciting project...and sink bowels had me cracking up...I. do that all the time! I have a rough time with towels and bowels. Lmao! I do love your sink though with its big sink bowels...mine only has little bowels and I wish I had more space for all the dirty dishes! Ok I'm done now. :/

Thank Judy, that's nice of you to like my ramblings about pine cones and sinks. <3

Um Bree, well.... while I can hold my own with the six-year-olds in potty humor most times, my sink "bowel" joke was merely an accident. I'm just THAT bad of a speller! Lol. But from now on, I hear by declare, those big sections in sinks to be called, Brianne Sink Bowels in honor of you hot Mama! xoxoxoxox

I can't wait to see more house improvement photos. I love progress photos! I'll be thinking of you, and Jon, and Noah while I'm in Washington for the summer. Keep the photos coming.