Happy New Year! Doesn't 2010 seem (knock on wood), so much better than 2009 already?! Maybe it's the OCD in me, but those odd number years, oh YUCK! I just can't seem to handle them.  I think odd numbers are scary, they freak me out. Two-thousand and NIIIIIIIIIIIINE. Ewwww. So we can all feel safe and breath now because it's 2010! (Knock on wood.) 2010 Wow, just look at that number, really. How balanced. Two zeros, a one and a two. Two tens equal a twenty.  That's better than a relaxing spa weekend!
I knocked on wood because I'm slightly fearful that all of this positive talk from myself and others about 2010, might just jinx us. (KNOCK ON WOOD!) We need a better year though, and my god, after the DECADE FROM HELL.......
Um people, you need to take a look at the photo essay: "The 10 Worst Things About The Worst Decade Ever".  Yes! We made number #9.  This is so sad. How can human beings be happy or light when all of this has gone on in the past ten years. Not to mention additional atrocities like school shootings, and Prop 8 and republicans. Ok, just kidding....ha ha.
It's a wonder we're not all on GleeMONEX.... 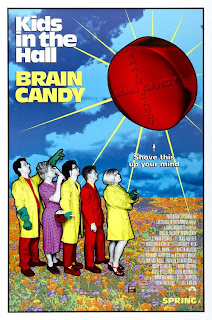 And this good thing also happened in 2009 technically. You know how we're always talking about selling this house, getting our of this tiny house? Since most likely A.) nobody would buy the place right now, as you've probably heard about the DETROIT HOUSING CRISIS, and B.) even if they did buy this place, our super artificially inflated 2004, top of the market price we paid with the  20% down wad of cash OMG would  be lost, forever! Because, in Detroit, this home is now worth a peanut and a half. Maybe two. I don't know.
So we officially bit the bullet, or bit our complaining tongues. I'm thankful for what we have. It's really lonely in this neighborhood (not many kids), but I guess we just have to make the best of it and get creative.  It isn't our ideal of living right downtown somewhere, but at least we're still in a walkable community, 15 minute stroll into the heart of town.  The size is laughably small, but we finally took the initiative and did something about it. Taking what little space you have, and really considering your needs, and then altering that space into the most beneficial place it can be = happiness!
Let me please introduce our first ever DIY home improvement. Six days (and counting) of hard work. Team work!
1. Our new workspace
Noah rarely used his little playroom, which was originally a den. So we decided to change it into the work space that Jon and I needed. A desk to do occasional work at for him, a place to write, edit photos and work on art for me! 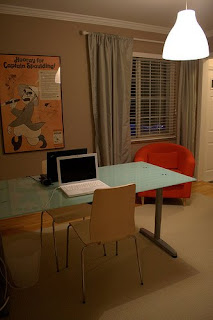 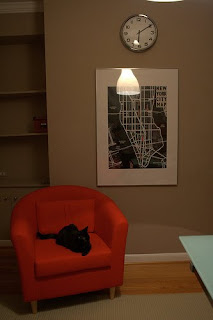 One day, I will have clients over, and they will sit in these red chairs while we review their photos. Maybe.
2. The New Playroom
Um, have you ever seen our basement BEFORE? OMG. No. It was not great. Freezing, gray, drywall, industrial Berber carpet. Ahhhh! It was a cold, dismal cave with a mound of old toys.
Now it's this! A warm squishy pumpkin! 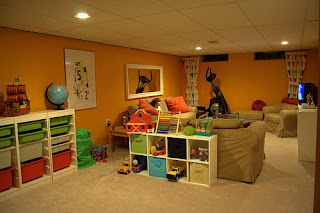 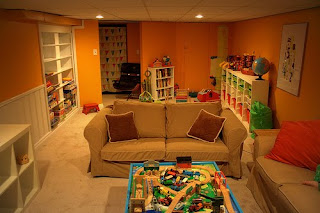 What kid wouldn't want to PAR-TEY down here? Now all we have left to do is convince him to go down the basement and play. Not.exactly. working.....UGH.
3. I (kind of) sewed new panels for this old hutch. Some day, I'll fabulously transform all of our traditional hand-me downs in contemporary furniture through the magic of IKEA. 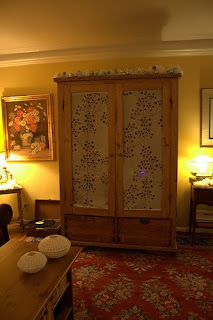 4.  The last thing that I want to do around here shortly is wallpaper the bathroom. I've given up on the expensive prospect of a new floor and vanity for now, and would rather hang and interesting wallpaper to distract. Here is is. You likey? Hurrah for tiny, single roll bathrooms! 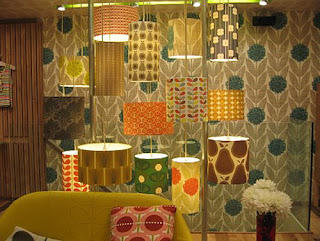 Wow1 You guys have been working HARD! I love all the new improvements! Excellent! And I love YOU...have a wonderful New Year! Hugs and loooooove....

WOW! What an amazing house and so much more functional for you guys. I am so excited! If you just hang in the basement they will come. Kind of the pied piper (sp?) thing. Congratulations. I just took 3 huge boxes to Salvation Army myself. It feels good to find space again. Happy new year!

The changes look beautiful... and I'd hire you for my photos - if I had any.

I do think saying it's the worst decade ever might be Time taking things a bit overboard. The Black Plague was a rough time. The 30's and 40's were kind of an ugly blot on history. That said, I too stand with you in welcoming this decade with optimism.