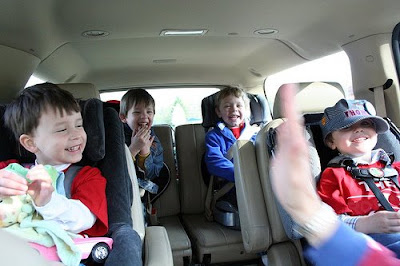 Hi guys, over the years, I've gotten some of the best advice from you out there! So, I thought I'd post and see if anybody has some input. It's about car seats, mainly alternatives to getting Noah a booster seat. (First, I need to thank Sarah and Brianne for their advice several months ago.) Of course, I've forgotten half of their top picks names, and also wanted to see if anybody else wanted to weight in....

So, what do you do when you have a small four-year-old, and don't feel comfortable putting him into a booster seat? Actually, even if he was big, I still don't think that boosters are the safest option when you compare them with five point harness seats. Noah is about 35lbs now, and roughly 40" tall, he still fits into our original car seat, but sooner or later, he's going to out grow it, and I want to be prepared. The allure of a light weight, non-bulky booster is huge, but I supposed not big enough to get me to buy one right now. Oh, and they're way cheaper than another car seat! Ugh.

So, what did you do with your four year old? Did you buy a booster? A convertible car seat? Is there a brand you recommend?
Thanks a bunch!
at August 09, 2009

I don't like boosters. And Josh is 50 lbs and 47" - I still don't like them. Especially if you see them fall asleep in the car. He was just hanging out of ours yesterday, and I kept waking him up so he'd sit upright again...not cool.

If I had to do it again, I would have bought the Britax. Now I'm thinking about the Apex or Sunshine Kids.

Thanks Sarah!
That's right, the Sunshine Kids, I just couldn't remember the name.
So you did buy a booster? Ok, I'll check out the Britax and the Apex too. I just haven't spent the $ on a new one since he still fits in the old seat, but I think I am going to need to spring for one soon! Thanks a bunch. :)

We brought Cait a high-back booster(http://www.evenflo.com/product.aspx?id=109&pfid=41 ) a year or so ago. It has side guards that help to keep her head from bobbing around when she falls asleep. We also brought her one of those neck things that people use on airplanes. The two together work well, not that she sleeps much in the car anymore. She was in a 5 point harness until she reached 40#, which was the limit on our Graco car seat. I can't see Cait putting up with a 5-point harness now but I suppose, if we had left her in one, she'd never know the difference.
Cara is in a forward-facing 5-point Graco seat still and will be in that until she outgrows it. Then, we will be getting her a booster, too, I imagine, although, we saw a great 5-point seat that goes up to 50# that we may get for her--saw it at a HTSB demo.

We have a high-backed booster for Tyler, and he'll stay in that until he's outgrown the carseat phase. Now, Tyler's 51 pounds and 46 inches tall. He's a hoss at 4. In retrospect, I wish I had gotten one with the five-point harness. They are simply safer. My neighbor has a five year old who is still in a five-point harness (he's considerably smaller than my giant). He can buckle himself in it even.

Hands down Sunshine kids Radian. I love it, it is slender, folds for air travel(like we do so much of that) but it gets a really solid, tight installation. I have had so many seats it could make your head spin and this is my fave. The new one is being tested to rear face to 40lbs, which is fabulous since the longer rear-facing the better. Noah would probably be upset if you rearfaced him now though! lol
But, you can rear-face with this one to 33lbs iirc, and it harnesses to 65lbs. Check out albeebaby for the best price, usually.
Miss you!

We have the high-backed boosters for the girls. They have worked out quite well, although, as has already been mentioned, when they sleep in them, you have to figure out how to keep their heads upright. But, I would have been happier with a sturdier one, possibly the five-point harness system as well.

I think that whatever you feel is the safest for your kid, that's what you should go with.

I've had two completely different experiences with my kids, and both are now in booster seats - from a safety perspective, I feel that most options out there are great for kids, but I'm not too keen on the whole "phonebook with armrest" type boosters - however, this is all that Logan wants...

The high-back boosters are great, they offer enough support and I think they are comfortable. Ours even has a harness if we want to use it (we have an EvenFlo).

Kids all develop at different rates, and since these are such an investment - it's best to get the one that YOU think you'll get the most use out of.

am so glad we bought the Britax before Dominic was born! I studied, analyzed for over a hundred hours...did NOT want to go through it again if he got too big.