What will a new GM look like? | Detroit Free Press

So, this is the end of the line. 100 years of automotive manufacturing history distilled down to GM's Monday bankruptcy filing.

No one would dispute that these are strange times in Michigan. Our houses aren't worth anything, our unreplacable jobs are vaporizing, our infrastructure is crumbling. Not to put too fine a point on it, but the sands are shifting underneath us, and not only does no one seem to know what to do, but they haven't known what to do for decades.

When I entered the workforce ten years ago the scene was very different. The internet boom was in full tilt, everyone seemed to be leasing a Tahoe, and Americans were feeling pretty insulated from the economic and political pressures that would come to define the next decade.

Ten years ago this month, I started an internship with General Motors, in the Customs Administration department of the tax staff. I went to work there for a few reasons - I needed a required "field experience" to graduate from James Madison College at Michigan State, and GM paid its interns enough that I could have an apartment in Royal Oak and beer money. I had read "My Years With General Motors" by former chairman Alfred P. Sloan, and I was enamored with the concept of industry on a vast scale. The Madison experience focuses on material that tends to lead to foreign service, public policy, or law, but for me business seemed to be a way to tackle practical challenges, and I was excited to work for (what was still) the largest company in the world. Beyond any of this though, was that I loved (and continue to love) cars - the beauty, power, and romance of four wheels. I was just so thrilled to work for the company that had produced so many wonderful machines. I get the part about "unsafe at any speed" and buying up streetcar companies just to close them, but 21-year old me wanted to work for a car company.

I loved working in the old GM building on Woodward, as I discussed a few years ago. When GM asked me my to extend my internship at the end of the summer, I viewed it as a stepping stone to a 30-year career, and I happily packed up my desk and moved with the rest of my department to the Renaissance Center and it's awaiting Aeron chairs. Even though our view was the Detroit municipal salt stockpiles, it was from 30 stories up, and I felt good. I was pretty crushed at the end of 1999 when I was not offered a job at the end of my internship. I had interviewed for a position onsite at GM with Sandler & Travis, the trade consulting firm that GM contracted a lot of customs work out to. Several GM customs employees were recruited from S&T after a few years of nose to the grindstone behavior, but when I expressed reservations about my ability to survive on their starting salaries during my interview, and the offer never came.

Over time I have gradually become aware of just how fortunate I was to not get what I wanted when I was 22. I was back in the Renaissance Center a few months later working for PricewaterhouseCoopers, and I went into it with the same sense of optimism and bushy-tailed eagerness, but I was gradually worn down by the repetitive nature of outsourced tax consulting work. Ten hours a day of trade compliance was just not for me.

To an extent luck has factored into my journey, but we've also been hustling very hard for six years to create a name for our brand, and in some ways I'd still consider us a start-up. I jumped from PwC to a small family company. I'm not worried about job security in the sense, of being let go but we are as vulnerable as any company is right now to the buffeting of the retail environment. I'm in the same boat with respect to Detroit area real estate and infrastructure as my automotive brothers and sisters. In a way there is more uncertainty with retail, because we have no hope of a bailout. We are trying to be responsive to economic conditions and the whims of consumer spending habits, and I think we'll come out of this recession OK in a year or so.

Will this attitude prove as illusory as the notion of a thirty year track with a multi-national company? Time will tell. In the meantime, I'm optimistic about this: 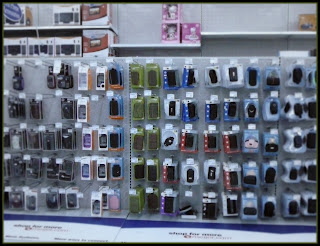 This week, a major Midwestern retailer received a shipment of environmentally-friendly phone cases - the first in a complete line of "greenGEAR"sustainable electronics accessories, designed in Michigan for conscientious consumers the world over. Three and a half years ago I wrote this:

In the longer term, my hope is that companies like the one I work for will carve out a new future for our region, one not tied to automotive manufacturing, but on ideas, technology, and innovation. But no one living in the US should think that their lives won't change if the US auto industry proves to be ultimately non-sustainable.

I'm sad to be correct about the latter, but I'm filled with optimism for the former - greenGEAR is the realization of a lot of work for myself and my colleagues, and I hope it's a template for our company's future - sustainable materials, beautiful construction, and stylish design. Maybe someday we'll even be able to make them in Detroit. That's my goal anyway, and when I look how far we've come already, it is not beyond the realm of possibility.

Ultimately, the car industry was not to be for me. I think a lot about the universe though, and I know that somewhere on the space-time continuum 21-year old me is driving home from downtown after his first day in the GM building, watching in amazement as a pickup truck burns on I-75 and everyone just goes around it. Or his boss just gave him a classic framed Trans Am poster from 1982 (sweet!) from the GM building that they were just going to throw away in the move. Or he's got a meeting at the top of the tubes with GM's VP for public policy, in the hopes of finding something a little more interesting to do for GM than tax compliance. Well, we know now how that worked out for me, and for GM, and that's enough reminiscing for one Friday afternoon. For the Detroit and the people that love it, it's time to roll on to the next thing.
at May 29, 2009