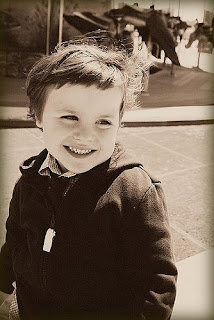 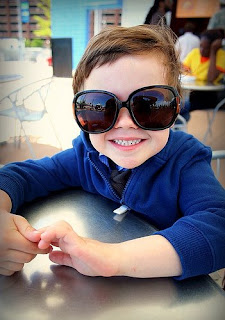 Poor Noah, he came down with a raging red rash over the long weekend. At first we thought it was some junk food induced allergic reaction to red dye, but soon it dawned on me, this is Fifth's Disease! Fifth's disease is one of the most common childhood viruses, but luckily, it's usually quite mild. In fact, apart from minor, very brief cold symptoms, most parents wouldn't even know that their child was sick if not for the rash that develops at the end. He's fine, completely, and the rash is slowly fading.

I took Noah in to see our pediatrician on Tuesday. He was nervous and quickly broke down into tears over the thought of a potential vaccination or throat swab. I assured Noah that this would be just a quick appointment to check out his rash, no throat swabs and certainly no vaccinations needed. Our doctor was in and out in five minutes, confirming the Fifth's diagnosis, declaring him no longer contagious, and told me to take Noah to school.

At the end of the appointment, with a great big sigh of relief, Noah uncharacteristically hugged me a huge, looong hug. He looked longingly into my eyes and said:
"Mama, there's nothing better than.......
(I'm thinking he's about to say "you", or "over coming your fears" or something poignant about anxiety disorders and strep-tests.)

"Mama, there's nothing better than, something good, that's better than all the rest."
And you know, I thought about that statement for a few moments and by gosh, he was right! "You have something there Noah." I said. "This one deserves a lollipop AND a sticker dude."

Hey girl! When did Noah get his hair cut? I love it!

Fifths Disease - such fun! More of a pain for us as parents than anything else because we never know for sure if that's what we're actually seeing. :-)

I just love kids' witty remarks. So great. Merry's latest was when she saw a beat up pickup truck on the road. It was missing its rear window, and she said, "Oh, boy...there's a truck that kills deers." Haha! She spotted the ONE redneck truck in Canton! So great.