Today is a big day. Heck, this week is a big week. Noah started school again and he started with a new schedule, full days, everyday. Monday through Friday my big boy will be in school. I dropped him off, no, rather chased him up the hill and into his classroom. After that workout, all I received was a scant "goodbye". He was ready, more than ready, but I'm not so sure. Am I ready?

Noah's mind is always going. He thrives on stimulation and interaction. He is happiest when engaged. I think we're both homebodies to some point, needing that re-charge in the quiet refuge of our home, but before he's ready to for time at home, Noah seems to need a real dose of quality people time.

I always worried that being an only child, I wouldn't be able to offer him enough social interaction. This started way back, in Noah's first year. Even on top of the gym class we took together and the Mom and Tot, and and almost daily playing at parks and libraries, I still worried. But soon my worries were pushed aside, because even if I wasn't enough...enough of a companion, enough of a teacher....it wouldn't matter, Noah would be giving us other reasons to leave our safe, little home behind.

Around eighteen months he started getting into letters, really into them. By Twenty months Noah was identifying and naming them all. When he was two he wrote his name and learned all the sounds that letters make and just before turning three, Noah taught himself how to read. I'm not typing this out as a brag, because trust me, there are things that your children can do, that Noah can't, and as many of you probably and personally know, having a bright child comes with LOTS of......well, exhausting extras.

For example: The lack of need for sleep like a normal newborn/infant/toddler/preschooler. (Have not had a restful week of sleep yet.) A fear of food that is more than one texture or color. (Yum!) A fear of new foods. (How dare we.) An abnormal level of separation anxiety. Terrified of sitting on toilets. (Oh, this one is fun.) An immunity to all bribes, star charts, rewards, deductions, loss of privileges, time outs or reasoning that is supposed to work on children. The most amazing and astronomical stubbornness, I mean will power, you have ever seen. Hate of tags, loud noises, being touched too much, dogs, crowded places, strong smells, vacations and stickers. A never ending stream of verbal commentary on how we should A.) Parent him, B.) conduct our marriage and C.) drive. The necessity to work on emotions you wouldn't expect to deal with on a day to day basis from someone who is 37" tall: guilt, empathy, self-doubt, anxiety, frustration, concern and luckily giddy joy.

So before I really had time to worry over whether I was good enough company for Noah, it became quite clear that we he needed a bit more than just plain old me. I wasn't going to be quite...enough.

At twenty-two months I sent him toddling off to preschool. We were lucky to find a good, solid, happy preschool that welcomed us with open arms and had a two-year-old class. I in fact went to the same preschool, but that was 52 years ago, and another story. The first weeks were rough, Noah cried, I cried. But he's related to me right? And I cried EVERYDAY at drop-off in nursery school, Kindergarten, first and second grade. SHHHHHHH.....don't tell anybody. So this I figured, this must be inherited and Noah's crying is normal. I cried at school because I was anxious, and have you seen that show Herman's Head? That was my head. I was six and contemplating death and our own, personal insignificance in the magnitude of this vast planet. So I worried and I cried, and apart from crying everyday that first semester at college, I never cried in school again after the second grade. Problem solved!

Anyway, back to Noah. So he cried on and off all through his first year, and on and off all through summer camp there, and then he cried most of the three-year-old year and most of summer camp again. And then....AND THEN HE CRIED EVERY SINGLE MORNING AT SCHOOL THIS YEAR. His FOURTH year there, including Mom and Tot....FOUR YEARS! FOUR YEARS where he has played with the same children and has known all of the hands-on, loving teachers nearly his WHOLE life , like a second home! Four years he knew everyone and still he cried.

So I couldn't take it anymore and I felt so badly for him and nothing worked and we just wanted Noah to be happy, and it was making me frustrated because I'd get calls to come get him.............

Three weeks ago I pulled him out of his old school for good. It was unbelievably difficult for me to leave after so long, our kids growing up from babyhood together. The goodbyes were really hard, well..... for me at least. When I told Noah that he would be leaving, in his ever surprising way, he patted me on the back and said, "Don't worry Mama, there will always be playdates." What a great kid.

And here we are now, day one of his first full week at the new school, the school we started in September. The school that is GEARED towards children like Noah. His whole class is...just like him! It's amazing, a room full of chit-chatting little kids, with strong emotions, adult personalities and big brains. He fit right in and from day one, was a new little boy.
For the first time ever....people, I mean EVER! Noah has been consistently happy. The guy wakes up with a smile and looks forward to the day, the school day! His teacher works with the kids on their emotions, because in general, a gifted child's thought process could be way up here, but their emotional ability to deal with these thoughts is down there, way out of sync, it can be quite frustrating for them. This frustration we would see all the time has really started to mellow. He's chilling. It's a beautiful thing.

Starting in September, Noah asked if he could go to his new school everyday. I said I would think about it. Then he began begging me to let him stay full days, which is 3:00 dismissal as opposed to a 11:45 dismissal. After a month I gladly caved and so he was there for three happy, days a week. As time went on and he continued to be so unhappy with the old school, I took the leap and signed him up for the five full days.

I've never seen Noah so positive and excited. His teacher said that he asked her everyday, when he would be able to come to school all week long. Over break, Jon and I were asked time after time by Noah, if he could also stay for "after care". This would be a sort of latch key until 5:00 or 6:00. We said no, spending the day at school would be enough. So, he started to ask us if instead he could go to "morning care". Do you see what it's like?

I realize this post is a tad self-indulgent. I've bored you enough so I will stop here. I just needed something posted up to remind me why we chose to send Noah full time. This way, when I miss him, (and I already do) I can look back and see that it was for the best.

What will I do with all of this spare time now, you may ask? Well, between driving and drop-off and pick up, I have from about 9:00-2:30 at my disposal. Like before, a chunk of that time is taken up by the mundane stay-at-home duties...grocery shopping, running errands (post office today), getting some house cleaning done, or doing some dinner prep work. I'm also hoping to get back to the gym someday. I'd love to get in, even for a half hour. I have a "to do" list for the house, major projects like cleaning out and finishing the basement, maybe some painting too. Then there are meetings, usually once a week for different volunteering groups at school. I also started and will be leading a...get this...parenting support group, at Noah's school! We are all dealing with similar children. Everything takes up time, and I feel for now, there's a lot on my plate. A personal goal is to write more and get better at it. Make a portfolio and try my hand at freelance. I still think about that MA program in psych that I blogged about over a year ago. I would like to do it, but not now, Noah still needs me to be around after school. And I still need him...... 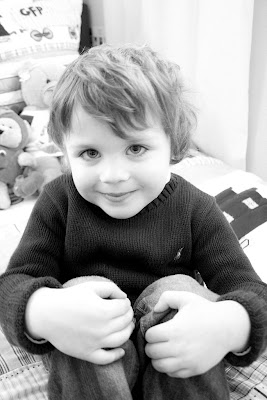 Aw, Lauren, what a wonderful post! I'm glad he's loving his new(ish) school so much. That's the most important thing.

And that picture is adorable. He's totally going to be breaking some hearts in a couple of years!

I think Kelsey is a LOT like Noah...she wears me OUT! And so so smart...and full of questions, and full of energy, until she FINALLY stops and falls dead asleep! I am glad you found a school that is perfect for your little man.
I love you.

We must be twins somewhat...I cried about the exact same things when I was little. Our insignificance in the vast solar system & who would help us if we destroyed this planet & needed another place to live. Where would we go?
Awww Noah...he is so beautiful Lauren. So glad he's loving his new school.