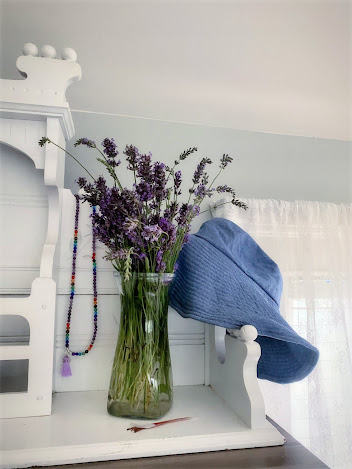 And so I woke up and couldn't get back to sleep, because I was thinking about how much this past year and a half has opened my eyes and how much of what I see upsets and angers me. I tried to let go of the thoughts, tried to meditate, tried to convince myself that it would be far healthier to go back to sleep than to ruminate on something negative. But I couldn't. So just after 5:30 I took off my pajamas and threw on some clothes, and I tip-toed out into the garden.
Do you know what happened!? First, I went down to the bottom of the yard and I saw dozens of teeny tiny, newborn Arugula popping out of the soil. And to my surprise so many other new things. Down here is where I have a medicinal herb garden, a culinary herb garden and a butterfly garden. Days of rain and heat have made everything grow. I stopped and smelled the blooms on the onions. They smell just like onions! Flowers that smell like onions! Said hello to the resilient Sage plant that survived the winter. I willed my Yarrow to come up soon, bright and yellow.
Then, I took a towel and my pruning shears and went to sit down beside my other herb garden, closer to the house. It's time that I harvested some of my Lavender, so I did. Noting how "woody" woody plants truly are. I trimmed each stem of Lavender carefully, pruned it back and what did I find....CILANTRO! There was cilantro underneath my Lavender! And to my right was one, small, lovely stalk of runaway dill. I cleared all of the Lemon Balm, Spearmint and Mint that has tried to over take this little plot. I liberated the Thyme from all of them.
And it got me thinking- plants do what they want. Some of them bulldoze over the other plants, competing to take over the entire garden. This is just like some humans. This is exactly what kept me up this morning. If plants compete and dominate for their own survival, not for the greater good of the garden, then is it only to be expected and accepted in human behavior? That thought made me so sad and defeated. But then, I thought about the trees and everything we know now about the inner workings of a forest, the symbiosis of trees and the moss and the fungi. I suppose it gave me hope, not every living thing is destined to be a jerk.
I carefully etched two shallow rows into the dirt with a little trowel and sowed some cilantro seeds. And then a fuzzy Bumble Bee flew up and began to buzz from one Lavender blossom to the next, right in front of my face. It was so cute I wanted to kiss him! Instead I just said "hello." The birds were out by now, chirping their repetitive morning calls. We have a red-winged Blackbird and we whistled a round together. Or maybe more like ten rounds, and then I sang him apropos Beatles songs, like "Mother Nature's Son."
It all made me realize that this is where I belong. Quiet, peaceful, slow. Perhaps not the most popular choice in life - I know now with great certainty that 80% I could and should be living as a monk in a monastic community. That would be ok.Rest assured more George Harrison in Rishikesh than Howard Hughes at the Desert Inn.
As for all of the selfishness and pain going on in the world? I'm not sure, but in order to keep sane, keep staying up, it's ok to do what you need to do, even if that means quietly cloistering yourself at home or in your garden among the cilantro if it feels right.
at June 30, 2021

Nice to Meet Ya! 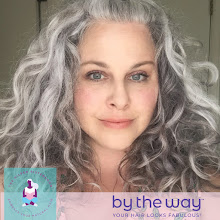