After the Storm, Arctic Temps & Stay-at-Home Parents of Only Children

Well, winter storm Ion has passed, and hot (or maybe not so hot) on his heels comes an arctic blast  so bitterly cold that temps like this have not been seen since the 1990's! We're talking wind chills to -45 degrees! Brrrrrrr.  Have you heard that this week, places like northern Minnesota were actually COLDER than the surface of planet MARS!?
That's REALLY cold!

We've weathered the snow storm well, thankfully. I'm so worried about the feral kitty though. We saw him last night a couple of times, exploring from yard to yard, but now the cold air is moving in. Hopefully he's hiding out in his shelter or some other good place. I have a feeling that he knows of many hiding places around here (sorry, I sound like a broken record on this subject, but it's on my mind)! UPDATE: Great news! We saw the kitty tonight twice. He's eating and walking all over. So relieved!

I don't know the official snowfall total for the storm, but I would say that we received about 12", give or take. These pictures are grainy because I went out this morning just as the sun was coming up, but here's what I found..... it was BEAUTIFUL!

How much snow would say that is? Granted there was some snow already from last week. but most of the snow in this picture fell in the past 24 hours. 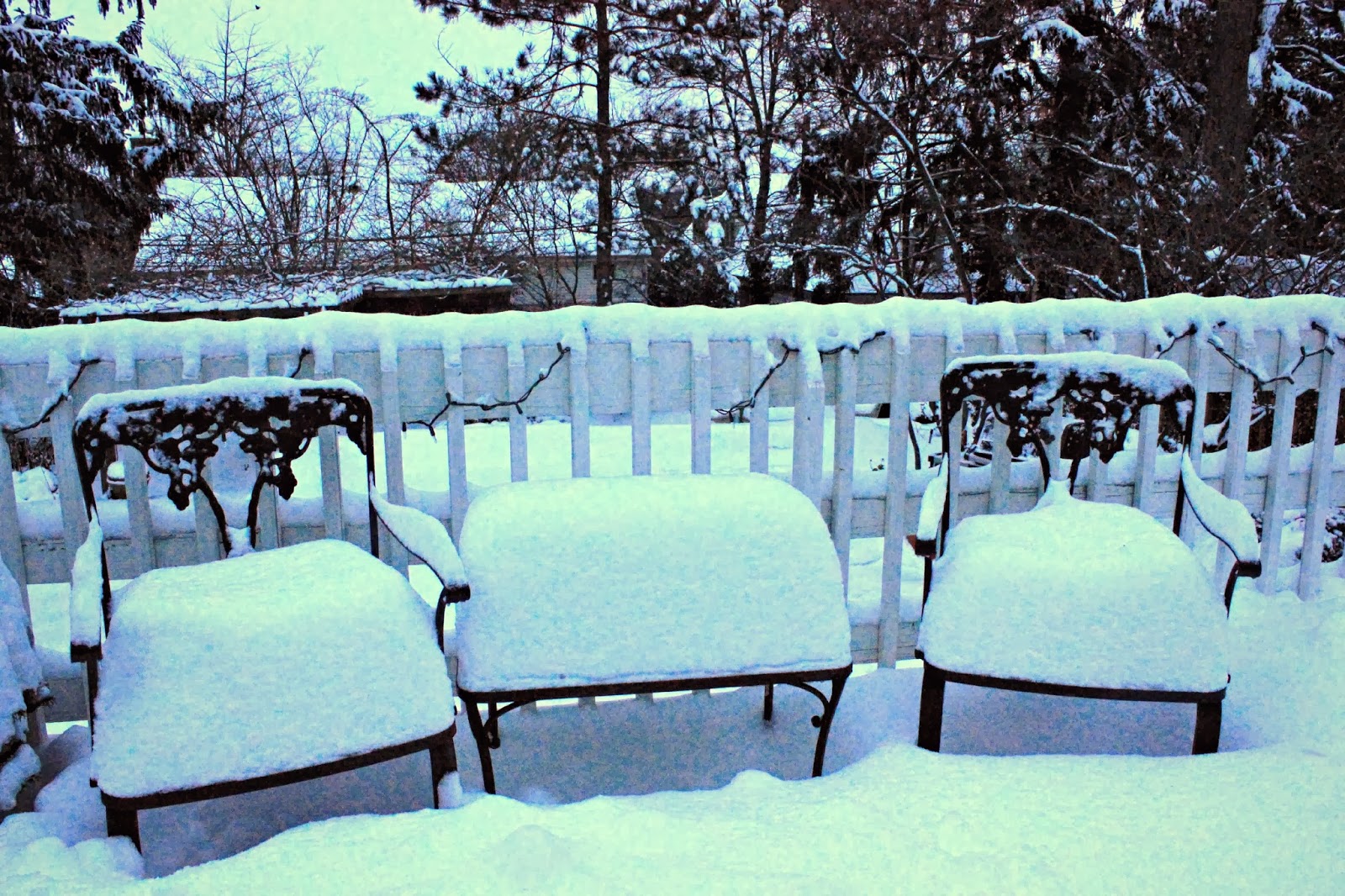 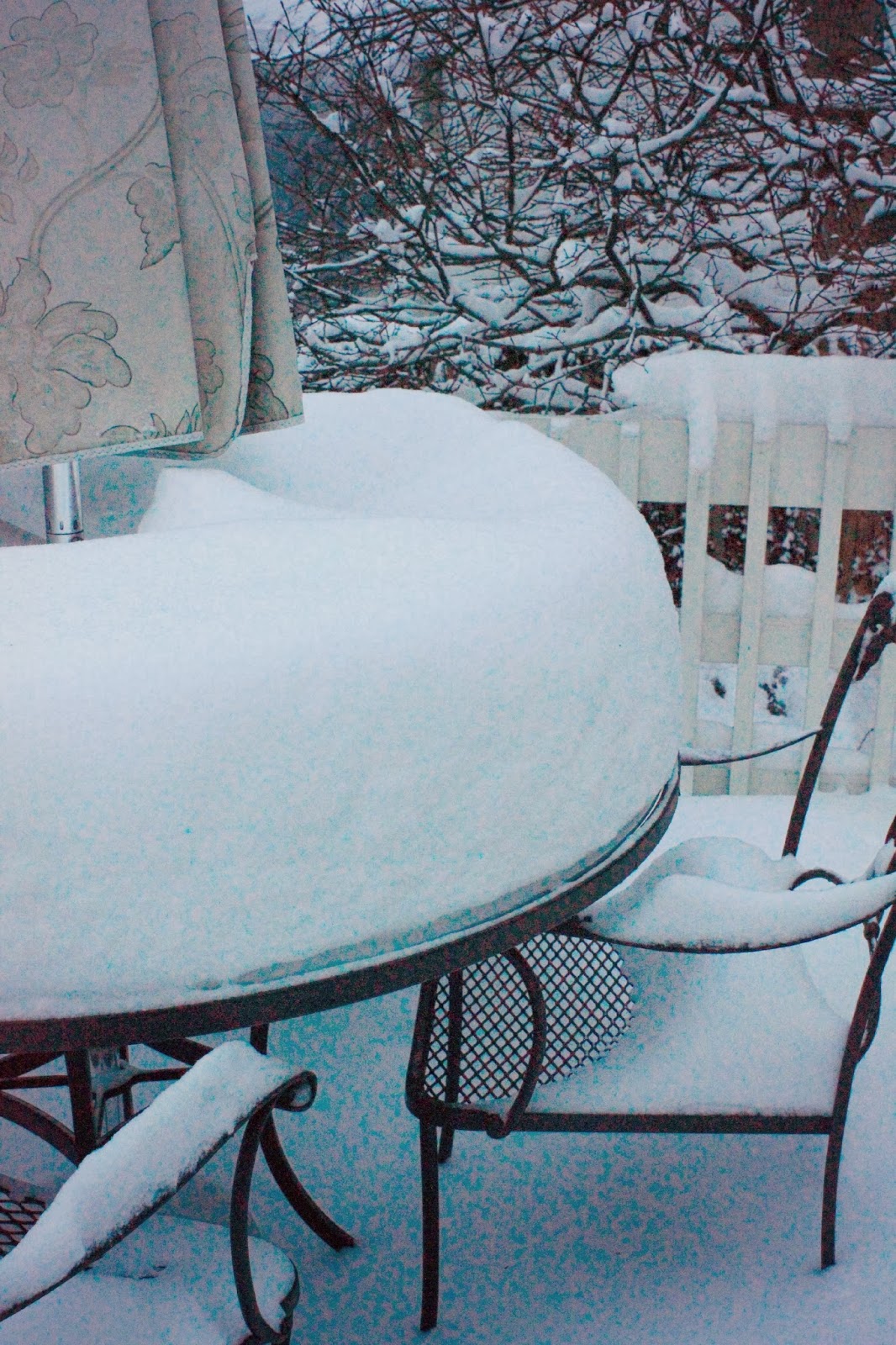 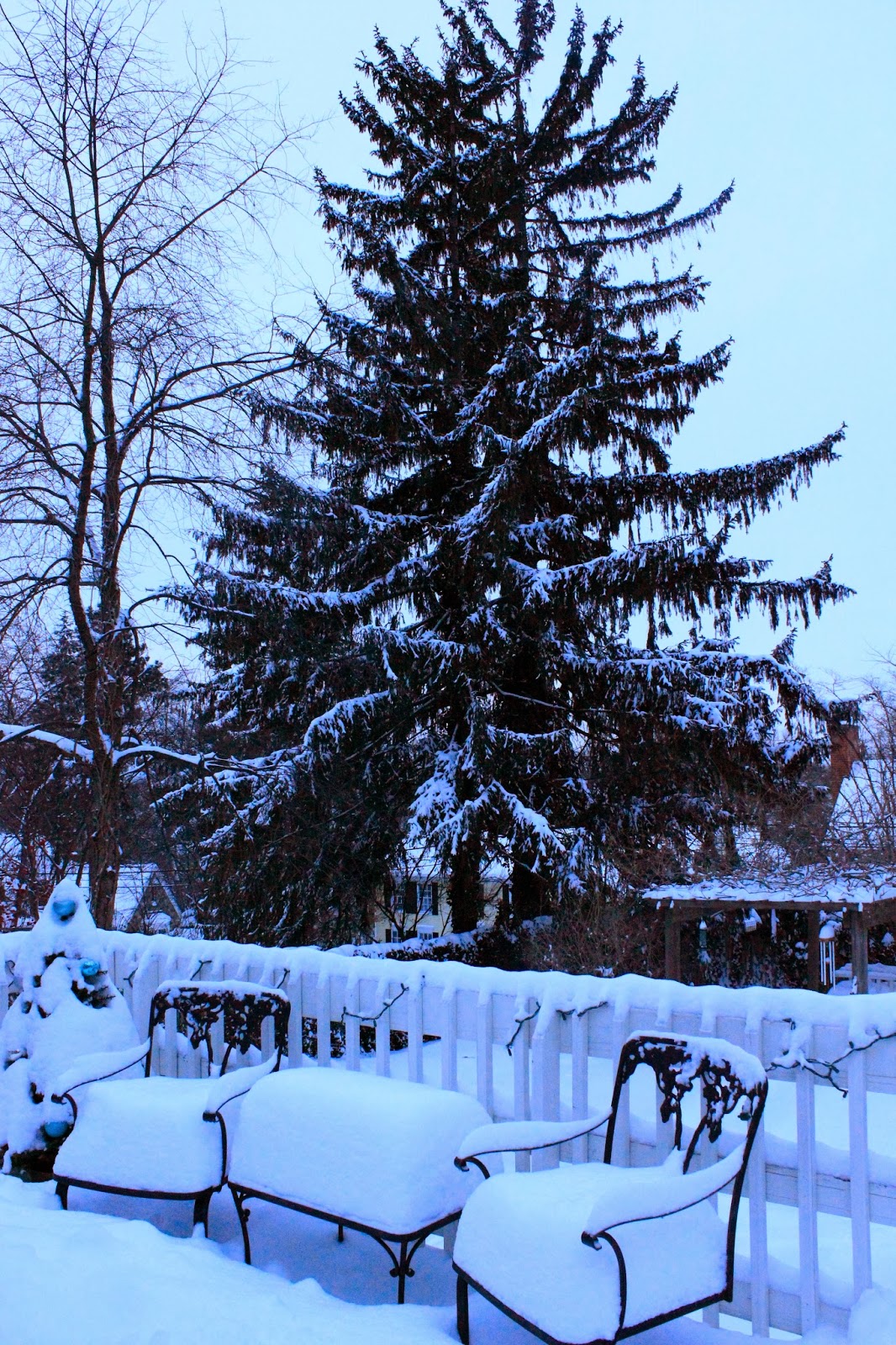 We were up by 6:00am because Jon had to make a call on whether or not to keep the office open. It's open, but actually nobody went in. With all this snow and now the wind chills heading dangerously low, everybody opted to tele-commute from home.

I decided to take a quick walk this morning before the temps plummeted any more. It was about 10 degrees with a wind chill of 0. I was out for about a half hour at which point my cheeks began to feel too cold. Other than that, being bundled up, it was fine.

Town was like another planet though. There was nobody around! I half expected tumbleweeds to roll past. 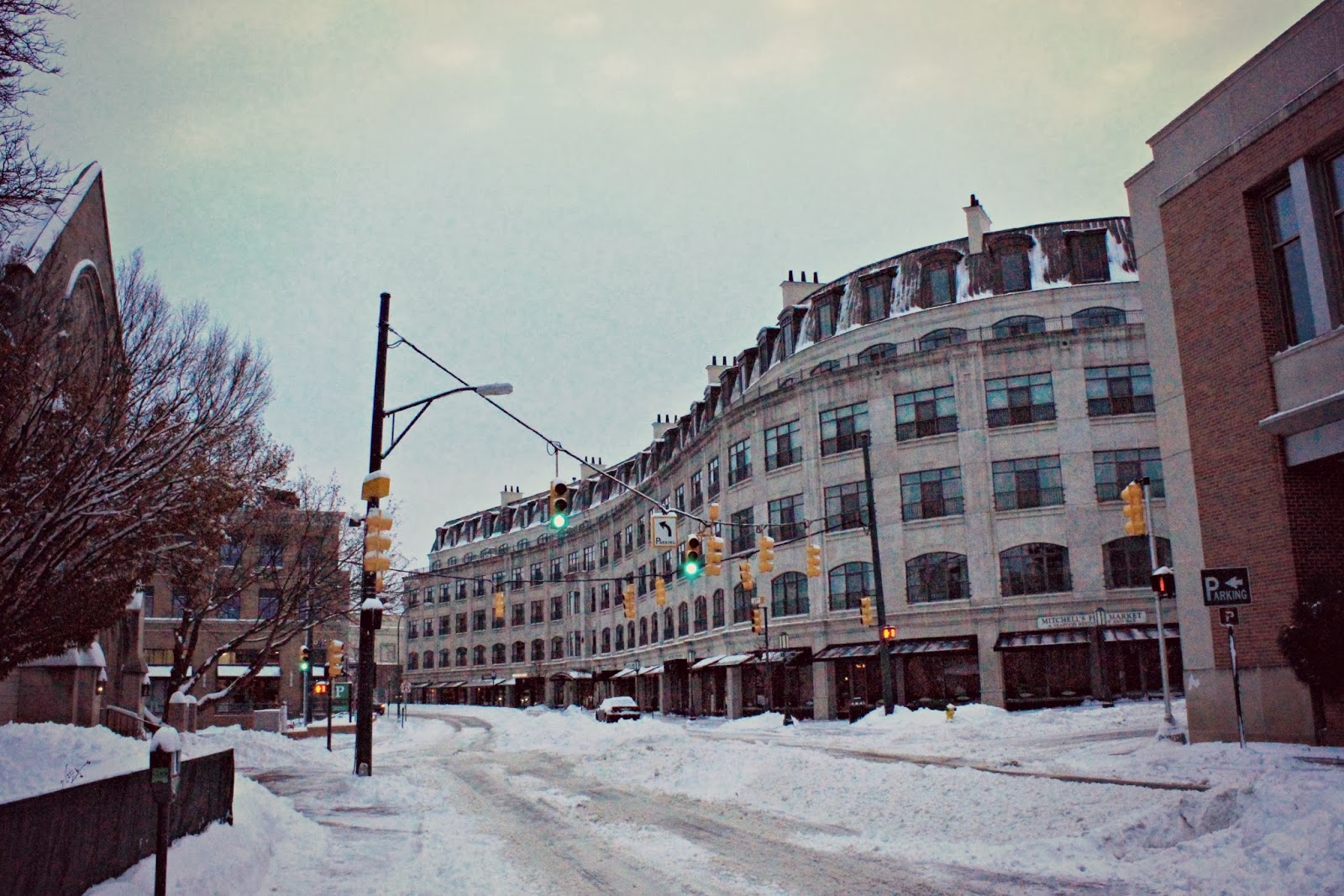 A block over, right in the center of town, I found a few signs of life, and at least the sidewalks were plowed. Walking across the intersections was another story. There was no clear path and I worried that people wouldn't see me over the giant mounds of snow in the middle of the streets. 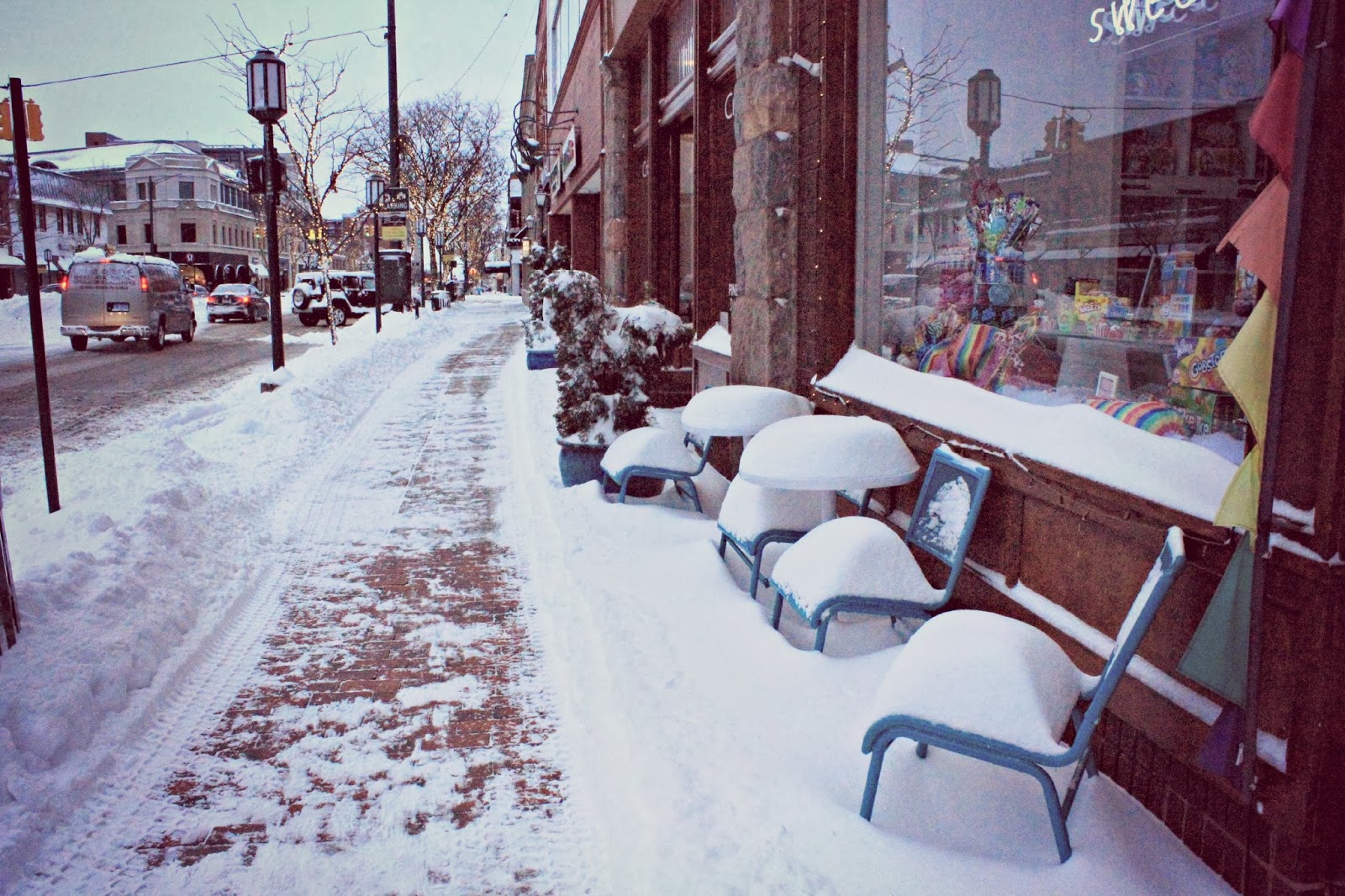 Lots of people in and out of Starbucks. Even a dog. Coffee makes the world go round. 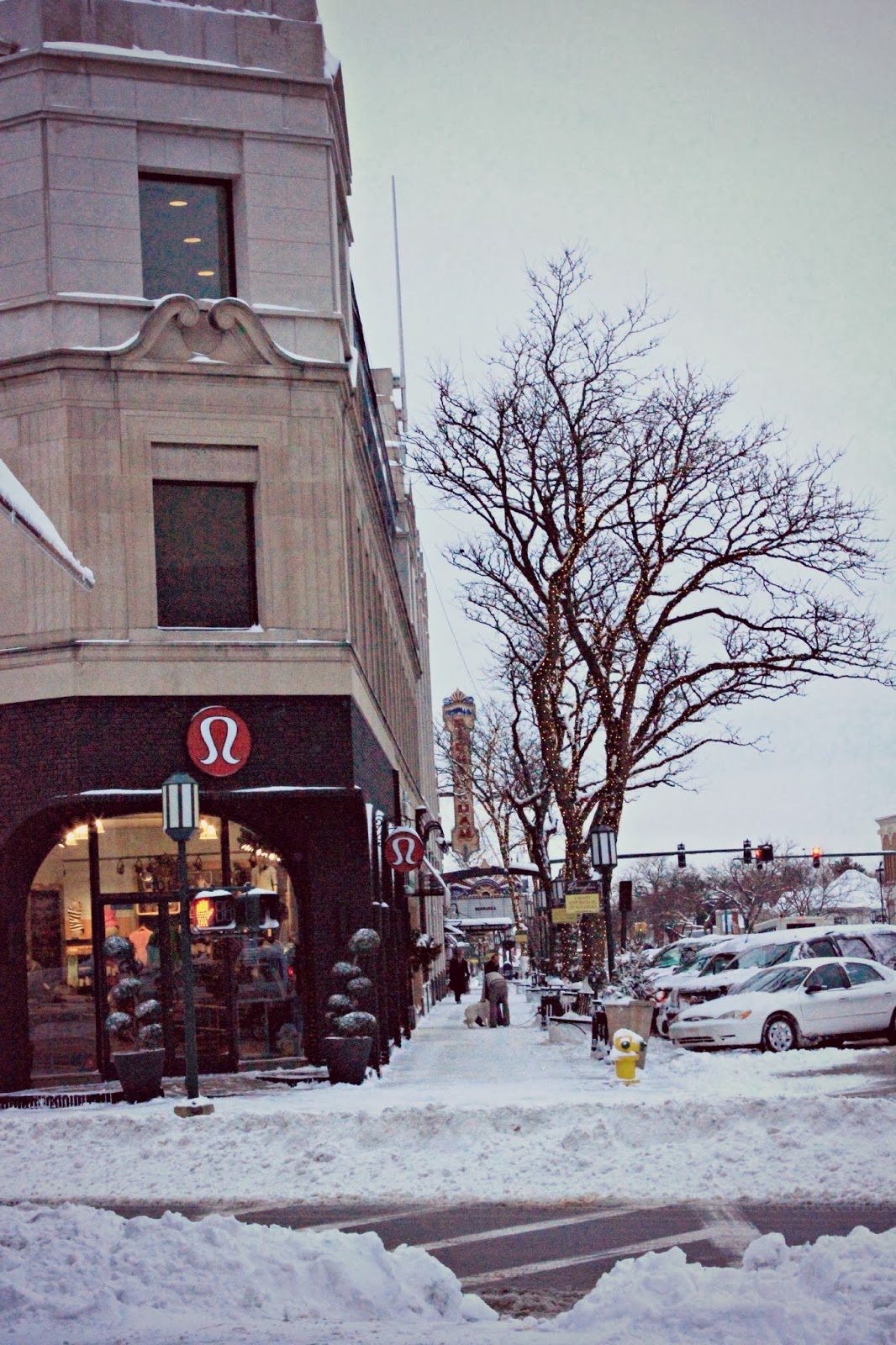 But other than that, things were pretty quiet. 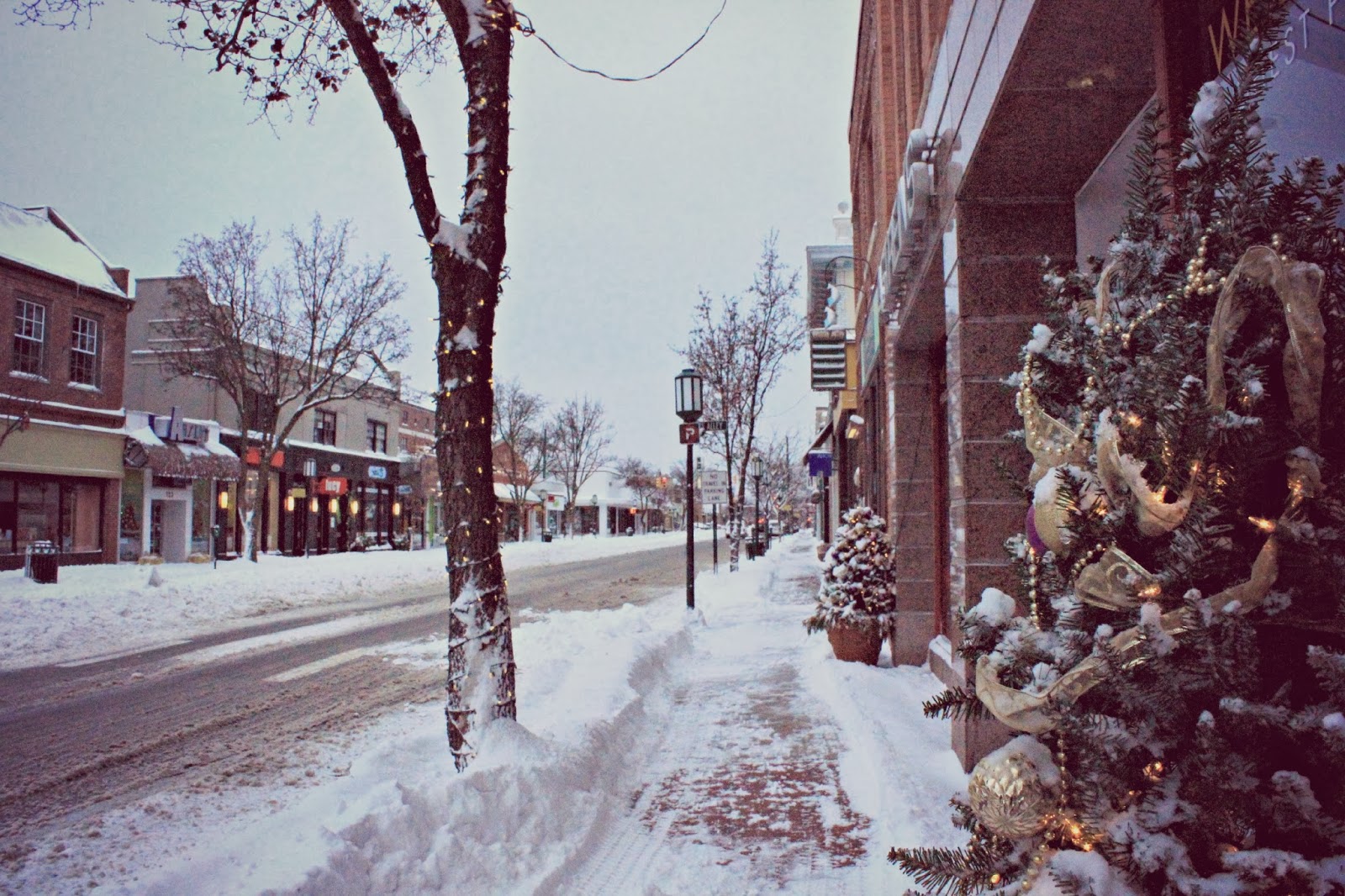 Yesterday before the snow really began to fall, we went outside to shovel and play. My parents gave Noah this "snow scooter." It's really cute! Noah had a lot of fun with it on the sledding hill, but actually it worked great on snow covered sidewalks as a scooter! 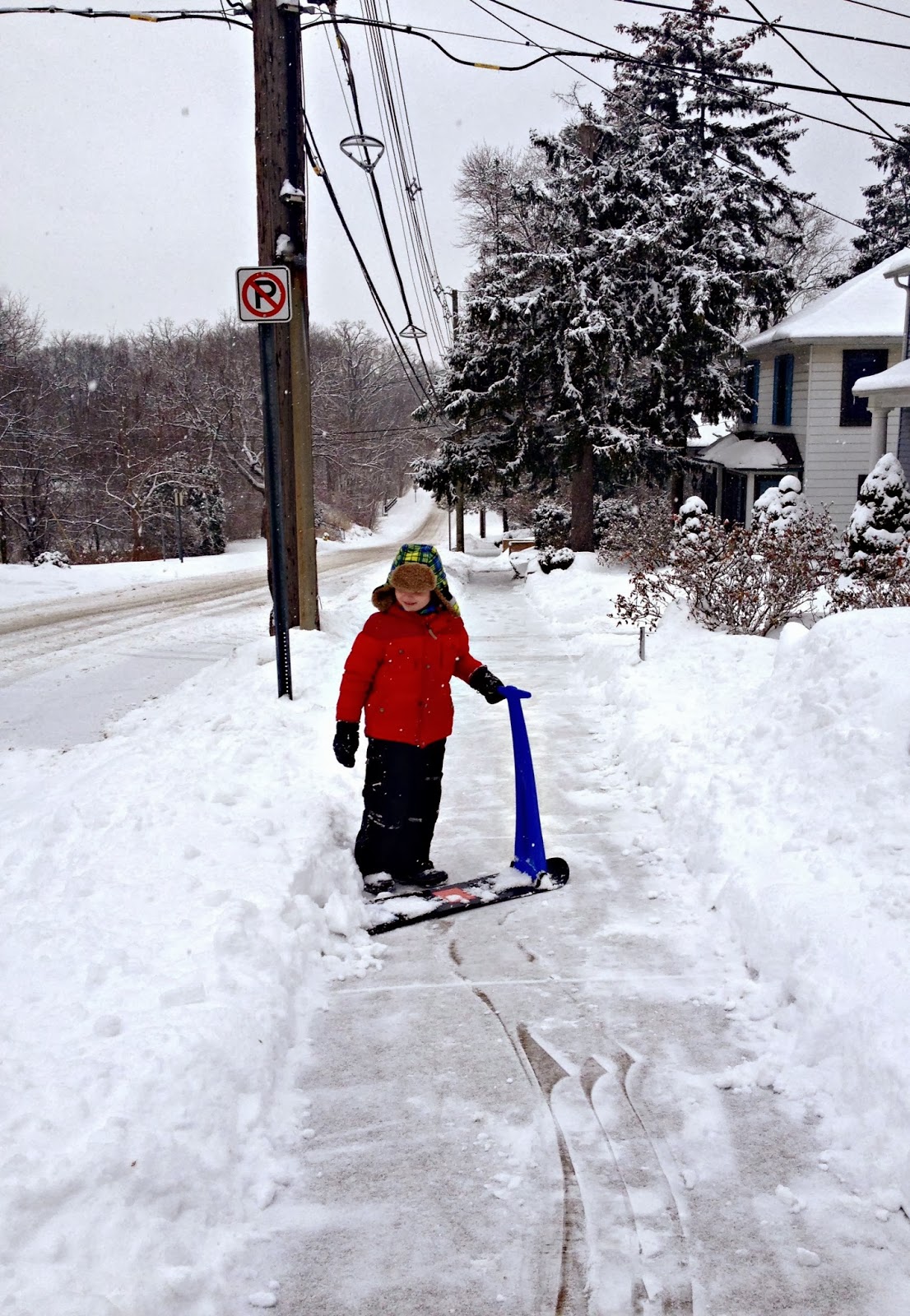 This is the sledding hill on our street.  This picture distorts how big it is.  It's quite a bit larger. Not that this matters. I don't even know why I'm typing this. 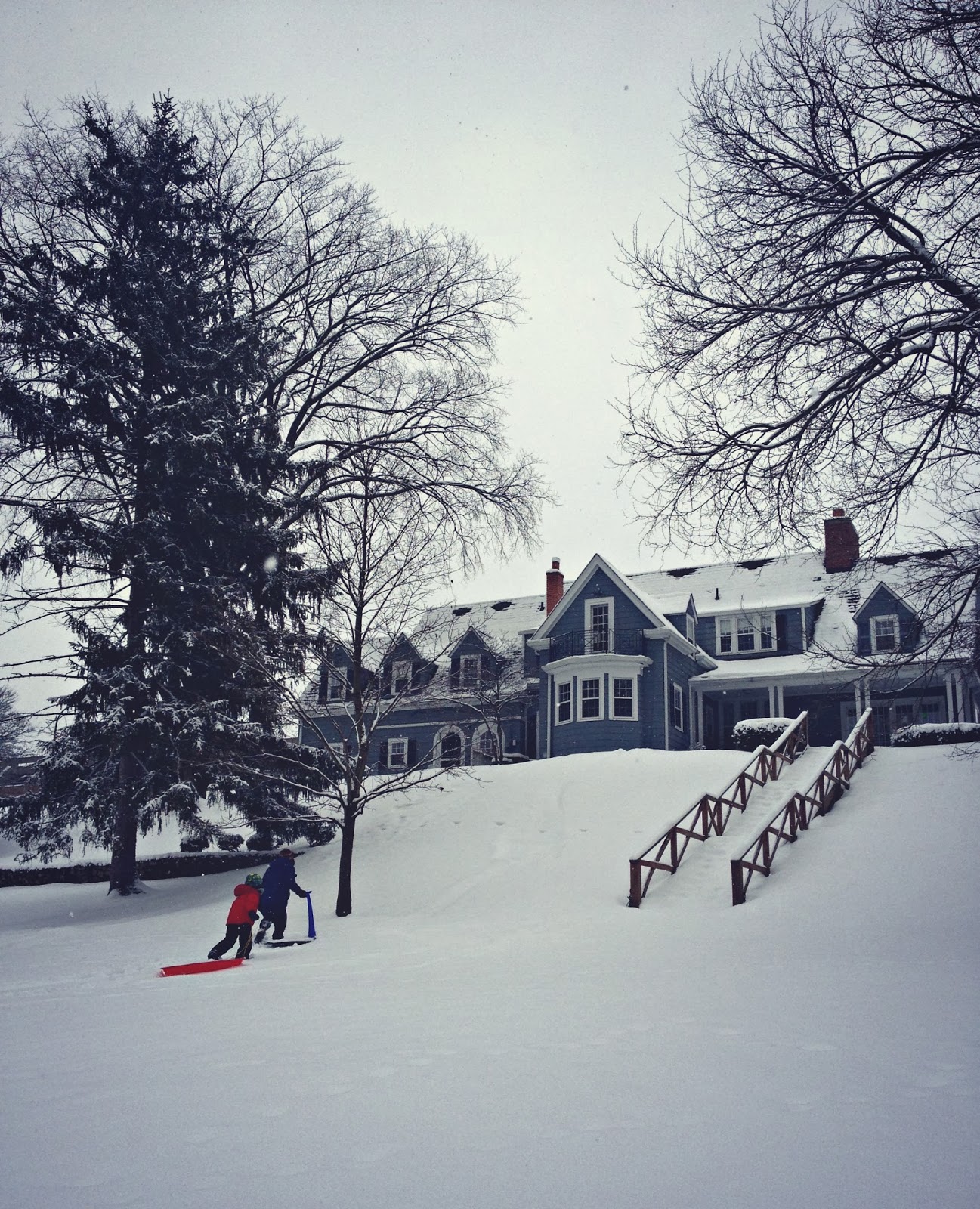 While Noah and Jon sledded and scootered, I looked around at a pond/marsh area at the same park. 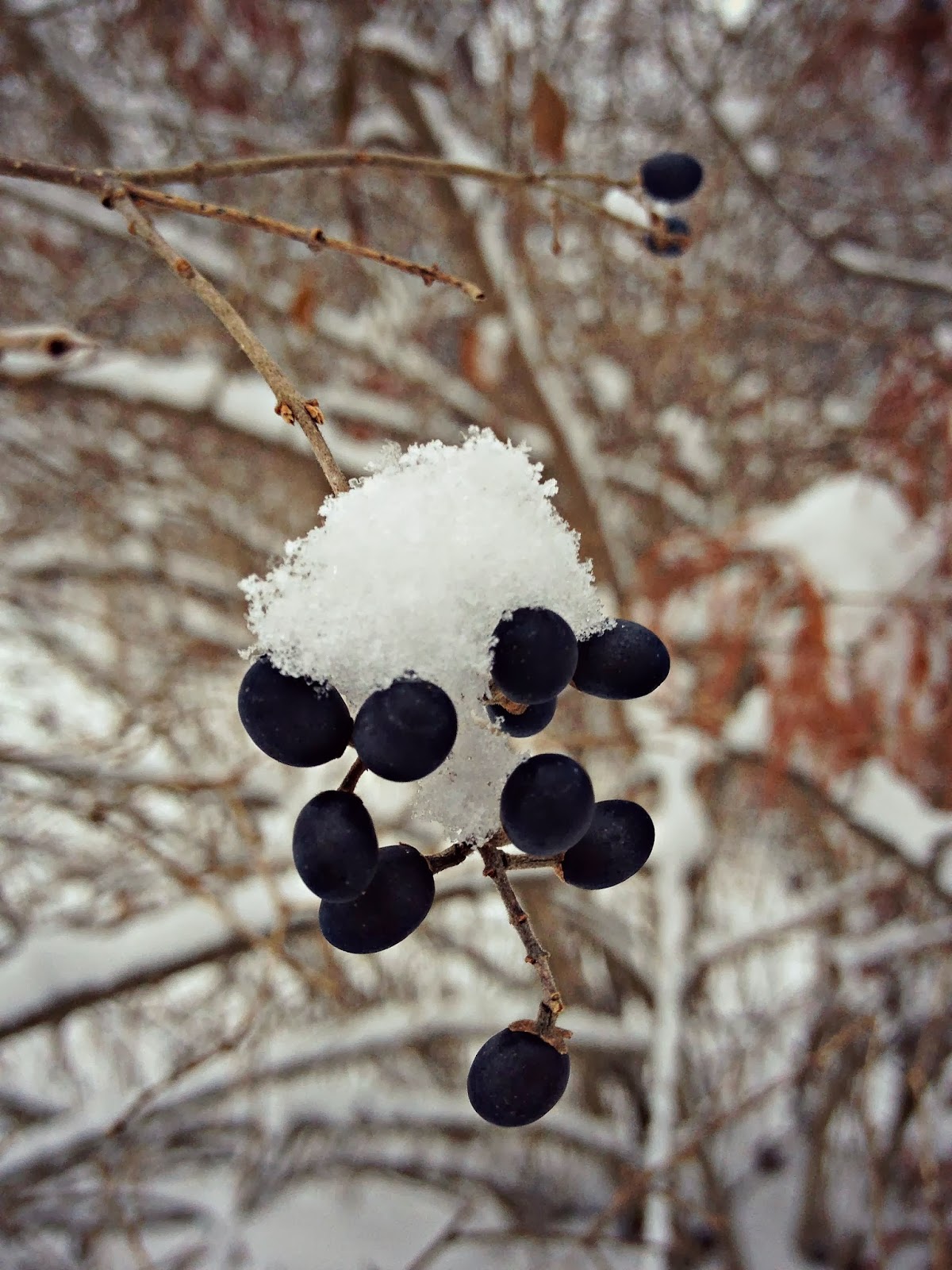 Eventually Noah was worn out. Sledding and snow scootering will do that to a person. Then we went home! 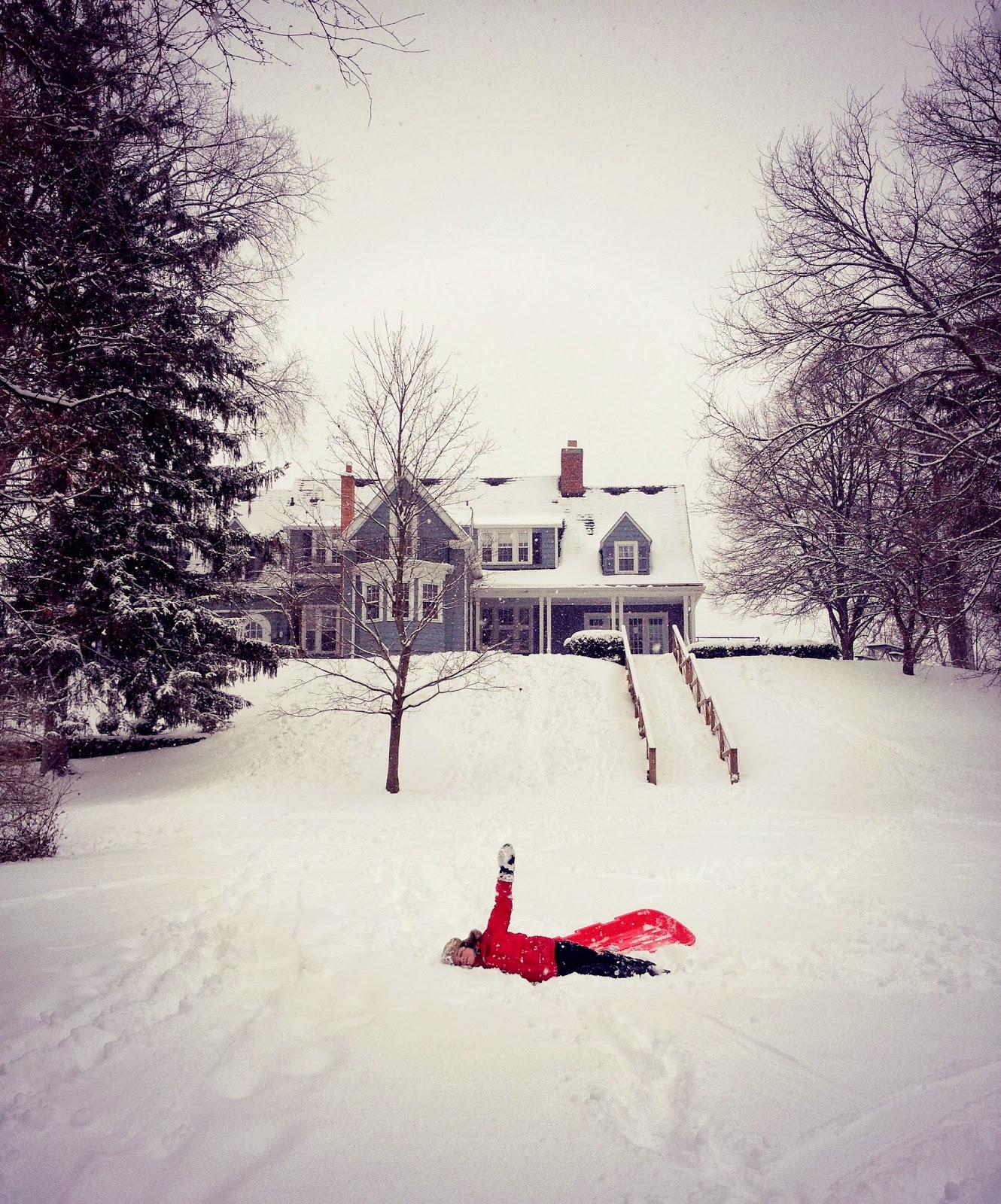 Although Noah has a snow day today (UPDATE! AND now TOMORROW!) and Jon's working from home, I decided to treat this as a "regular" day. My plans to start Flylady  had to happen! So after the walk, I checked my email for my Flylady newsletter and found today's "flight Plan." Mondays are "home blessing" day. This means that you are suppose to be kind to your home or "bless" it by doing one big surface clean. Flylady says to only spend an hour or so on it, that you clean more specifically during the week. I spent some time cleaning up, emptying the dishwasher, cleaning the kitchen and bathrooms, dusting, vacuuming, mopping, putting away laundry and finally ironing. Phew! Now I'm exhausted and it's only 12:30. Good thing the coffee's still on!

I'm happy though. It's sort of nice to be back in the swing of things. And now I'm going to make a meal plan for the rest of the week. Hopefully the roads will be fine by tomorrow so that I can venture out to the stores! Yeah, I kind of like routine. Do you too?

Along the lines of all of this "domestic" stuff, I came across a post this morning that really resonated with me, and I wanted to share. I'm not sure if any of my readers are also parents to only children, but if you are, perhaps you will be able to relate as well!

I've recently joined a Facebook group for parents of only children. Not for any big reason, I don't think about Noah being an only child too often, but just to see how other people handle certain issues or situations that might pop up. This morning a mother to an only 8-year-old son posted, and what she said was really relatable. I thought she articulated something very well,  something that I have had a hard time doing in the past.

Because the post I'm speaking of is from a private Facebook group, I shouldn't paste her post here, but I'll kind of explain what she said. She was saying that as STAY AT HOME  parent to just one child, a child who is now in school, she felt hurt and guilty when people would question her about what she did all day. She said that she felt people would talk down to her or diminish in their minds the amount of responsibilities she had and the work that she did, just because she only had one child. This has been very difficult for this mother.

For me personally, this hasn't been a huge deal. I received some questions when Noah first started going to school full time, but now, not so much. I did receive a comment over the holidays from a family member who laughed when I said that I didn't have much time for crochet these days. She said with only ONE child, you mean you don't have time to crochet!? I didn't really engage, but it was irksome to say the least. SURE I could decided to crochet rather than clean the house or cook dinner, but those things are a bit higher on my list!

Anyway, back to the original post from this morning.... I felt like the  SAHM who wrote the post gave a GREAT response to those who were asking her what she did all day at home with an only child away at school. She articulated so well. Here is a very loose paraphrase or her response to people's questioning and doubts...........

I just thought this was a clever response and it resonated with me. I know that I talk a lot about what I do as a "housewife," and that it is FAR from the most interesting topic out there, but I think it is an IMPORTANT topic.  Because women now have the ability to become career women or stay-at-home women (if they are fortunate enough to have the choice), there is always going to be a bit of stress and guilt involved with each option. Hands down I feel so lucky and happy to be on the SAHM route right now, but I definitely feel a sense of guilt about it too! Should I be working? Should I be contributing more? Am I wasting some marketable talent? Am I wasting time? Things like that. (By the way, I firmly DO NOT believe that a woman can have it all. Not at the same time. Not without burning out).

I also feel that while bringing home a paycheck or celebrating a promotion are tangible successes and accomplishments, the accomplishments of a SAHparent are rarely as visible and obvious. The sink becomes dirty as soon as the first person brushes their teeth. Often times the repetitive cleaning of the sink or the toilet or the mirror go unnoticed. The new gallon of milk just shows up in the fridge..... You know what I mean! :)

Anyhow, that's the scoop! I'm off to find some new recipes to make this week.

Thank you for your post and for all the lovely pics. I wish we have a bit of snow, but here in England we only have rain and flooding at the moment. I read your blog regularly and enjoy it very much. It takes me away from my own life and often helps me refocus. I very much understand the SAHM and only child phenomenon as I'm living in the same set up. Fully agree with the response this lady has given - so so true! Love the work you do and please carry on - means a lot to me. Eva from UK

Oh dear Eva, thank you for your super sweet comment, that made my day! Thank you so much. Guess what? I too reader other people's blogs to help me refocus and MANY or them are from the UK! I have just absolutely been in love with all things UK for as long as I can remember and have always wanted to live there. I am sorry for the rain and flooding. If I could, I would send you a bit of white, fluffy snow. If you can believe it, today is the THIRD day that school has been canceled due to snow and now frigid temperatures. It is FREEZING out there! Brrr......

I agree with you Eva, didn't the Mom of an only put it well? I do understand. Thank you so much for your encouragement. I will continue to write! I wish I had the time to post daily. I won't stop though.

Thanks again and sending cheers to you across the ocean Eva!
xoxoxoxo,
Lauren :)