Just so you know, it's snowing.
Again.
This one has been dubbed by the National Weather Service as: Winter Storm Ukko.
Did you know, that "Ukko" is almost the Japanese word for POO?

Jon just stopped home for a minute to park his car. He's on his way over to a luncheon put on by  the Detroit Economic Club, at the upper -crusty,  Townsend Hotel.  This function includes a speaker, the head of the Consumer Electronics Association, and presumably some good food.

I'm HOPING, that this little mid-day excursion, inspires Jon to take me, or at least send me, for Afternoon Tea at the Townsend, which would be very nice. I haven't been in a long, long time. Not since my friend Mrs. Muir invited me. I miss her very much. That was a lovely time.

I've read that the late, great humanistic Rabbi, Rabbi Sherwin Wine took an almost daily tea, or at least morning coffee at the Townsend. Breakfast too. (Jon says coffee and toast.)  It sounded so nice to me when I read it, and it made me aspire to do the same!

And while you could usually call me anything but "proper" (I stumble, I spill things, I find toilet humor amusing), when I need to be proper and polite, I can be.
So, maybe I should plan a tea. Any takers? You can come with me, just keep your little paws off of my shrimp canapé.
Oooh, and look! They serve champagne punch!Proper just flew out the window.........

Jon walked over to the luncheon without his wool coat. He asked me, he said: "Do you think I need a coat?"
And I said: "Yes, you need a coat!"
And he said: "But I've got my suit coat on, that's got to be enough."

And while it's only four or five blocks away tops, I told him that he still needs a coat, and an umbrella because winter storm UKKO is rolling in.

And no less than two minutes after he stepped foot out of the door,  it proceeded to simultaneously snow AND rain.

I feel bad for the old, surely water-slogged Jon,  in his now 10 pound wool suit. But I feel even worse because I won't be home to give him a ride back after lunch. I have an appointment with my therapist, where I'll sit on her couch and tell her about the tonsil incident. And then we'll deconstruct it, and find some hidden motivations, and I'll probably listen to Simon & Garfunkle's "I am a Rock", on the way home, because it is my therapeutic rock anthem. According to Garfunkle, it is Simon's most neurotic song.

Also, there were no psychological rock anthems about emotional isolation on the drive home. Rather it was a moving power ballad that leapt forth from my iPhone play list.

Just as we were finishing up my "therapeutic hour", which, mind you, is not an hour. Fifty-seven minutes to be exact, my phone ran. Because I am such a wonderfully courteous young woman, I set my phone to silent before entering the office, so it was ok. When I left the , I returned the call. It was my woolly river otter of a husband calling, who to my surprise, was neither soaking wet, nor asking for a ride!

He had ingeniously hitched a ride with a complete stranger. A six-foot stranger, who he then INVITED IN to see our house! Jon was calling to thank me for always keeping the place clean, as he was able to confidently invite this stranger inside. At first I was like......" You hitched a WHAT with a WHAT and did WHAT!!!!!!??"  But then he placated me with the re-affirmation that I am the house cleaning BOMB, and that his new friend was really, truly a nice and normal guy who, met at the luncheon.

So when Jon walked in this afternoon, before leaving for the luncheon, he holds out a hair rubber band and says: "Here, I found this on the driveway. Is it yours?"
And, while I found it kind of odd that it was just, lying on my driveway, it looked like a rubber band that I could have potentially owned, so I said: "Um, sure, I'll take it. Thanks."
Really though, really, I have no idea who's hair band this truly is. It could be ANYone's . Anyone's!

And, you know EXACTLY what that means. HAIR GERMS.  Lice and hair germs.
But it was all pink and cute, and still hadn't been stretched out all annoyingly, like some hair rubber bands do.

It was a very difficult decision. I didn't know what to do, and then these words popped into my head:

And I picked up that pink filth ridden circle of fire, right then and there, and made myself one hell of a ponytail!

And I wore that strange danger rubber band for like an hour, until I started getting a ponytail headache,

And you know what? My head STILL doesn't itch.

I feel like I've come a long way in the past couple of months. I mean, remember that latex glove from my driveway? I would have never put that thing on my hand two months ago. And look at me now!

This was a really interesting dish, and quite easy to make! I feel like I inadvertently saved a lot of time by buying  pomegranate seeds, when I wasn't able to find a fresh pomegranate in the two stores that I visited . I would have been happy de-seed myself if I had one. Trader Joe's carries pomegranate seeds in their refrigerated produce section.

The warm roasted eggplant was soft and buttery. The cold buttermilk sauce- the perfect, juxtaposition, made with buttermilk, Greek yogurt, olive oil and just a touch of crushed garlic. On top was sprinkled the middle eastern spice, Za'atar , followed by fresh thyme and pomegranate seeds, and just a bit of olive oil.

A real unique mix of flavors and textures! I served ours with a side of basmati rice. It was a perfect, light , dinner.

Here are the eggplants pre-roasting. They're topped with fresh thyme, and what I could not believe....1/3 c. olive oil. That's so much! That's a TON of olive oil! Right? It seemed crazy too me, but I suppose it's not so bad, when you divide that into four. You slice a diamond pattern into the tops of the eggplants and then rub the olive oil into all of the cracks and the surface. 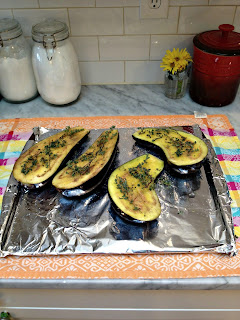 I was too lazy to go to the spice store to buy Za'atar sprice, so I made my own with thyme, sesame seeds, oregano, and salt. I was missing the sumac though. I thought sumac was tree!? 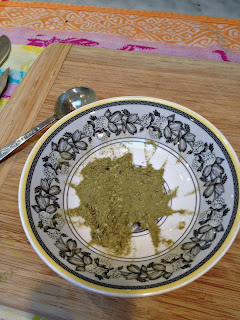 This the beginning of the sauce. The yellow is a little more olive oil. You mix it with buttermilk, Greek yogurt and a clove of crushed garlic. At first I wondered if buttermilk and yogurt and garlic and oil went together very well, but they did! 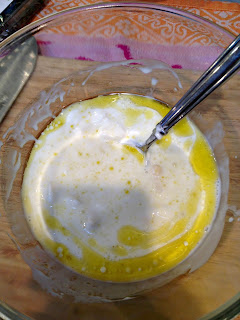 Here are the eggplants when they came out from roasting. I tried to get the right two darker, but I didn't want to end up burning everything. The recipe calls for whole sprigs of fresh thyme. I recommend removing them after roasting. They can end up quite twiggy! 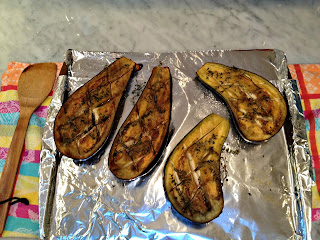 And here is the gorgeous eggplant, all dresses up with the buttermilk sauce, mocked up Za'atar spice, some fresh thyme, pomegranate seeds and a tiny dash of olive oil. Isn't it pretty? 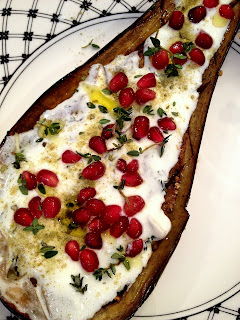 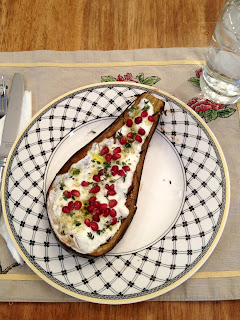 It was a delicious and easy dish,  and ended up with enough leftover for lunch! 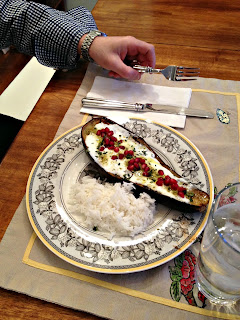 Let me know if you decide to try it out yourself. Bon Appetit!

You are so funny. The pink hair tie story is the best! I have to say that eggplant is not my favourite but your version really does look and sound good.

Um, the rubber band thing. You are SO brave. good job Lolo!

Thank you Loulou and Bree!!!!

I went to tea at the Townsend when I was in elementary or middle school - can't remember which. It's funny to me in hindsight... I totally feel like I wouldn't fit in if I were to go now!

Hey Lindsay! I understand, but, as long as there's tiny cakes, who cares if we fit in! ;)
Thanks for the comment. Have a great week!!!