*Don't worry my Silver Sisters, I will continue to write about gray hair as well, and new hair products and tips. I didn't want you to think that I forgot about you! \(^-^)/

A theme that seems to be running through my life this year is "learning to change your perspective." I never thought that homeschooling would be our thing, I was wary of it in general. Now though, it feels pretty normal and pretty good. My perspective was changed.

Since Noah was three years old, he's attended the same, wonderful school. It was PERFECT for him, and I always felt so incredibly lucky to have such a highly regarded school for the gifted in our own backyard. This wasn't just a school, since 1941 it has been a well known educational program and think-tank for gifted learning. They are open to all of the sensitivities and social-emotional differences that can come along for these types of learners. If anyone was going to understand Noah, it would be them.

Beyond all of that though, this school was our community. Going from Preschool through 12th grade, and being fairly small, this school becomes one's FAMILY. They were, in my heart, all of the families and teachers and staff, my second and beloved family. We were in it for life. "Lifers" is what they call students who travel through the lower, middle and upper school. For the past eight years I imagined high school graduation day, and how I'd need to bring a full box of Kleenex and how I would be SO PROUD of Noah and all of his friends, many of them that I've now seen grow from preschoolers to middle- schoolers. I've thought about graduation from the Lower School campus and starting Middle School and how it's even more important that our tight-knit group of parent friends need to continue with our strong friendships.

This is our future. This is Noah's path to growth and learning and a good college and a stable life. This is the community and connection and family that we always dreamt of. We were home. 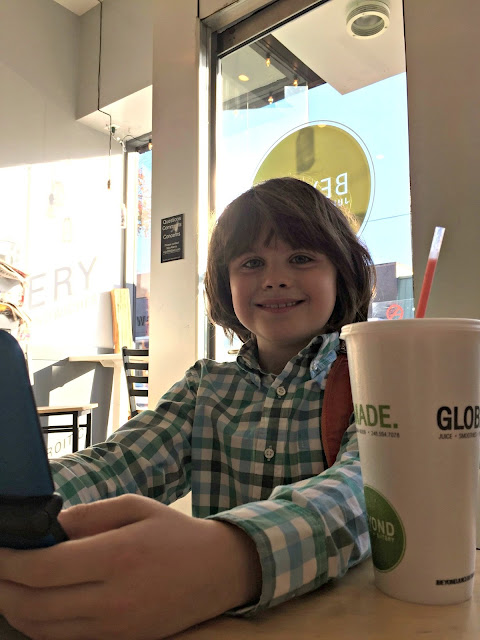 That is, until three weeks ago, when Noah was too anxious to attend his visit for readmission.

It doesn't sink in at first, when you lose the only future you've ever imagined. You're kind of in shock. We'd done EVERYTHING in our power to prepare Noah for plucking up the courage to travel the five blocks with us to the Middle School in the spring. All along, since last September, it was Noah himself who was asking to try again and start anew at the Middle School. We were just honoring his request and we were sadden and surprised when it just didn't happen.

Honestly, I was devastated. I've missed my school community a lot this year. My friends have been AMAZING with calling me and writing and inviting us over all the time, but it's not the same as being part of the school-goings- ons, or volunteering in the classroom or being on campus and sharing in the joy. I felt like a big chunk of my life was suddenly over. One of the best chunks.

Noah felt truly upset and embarrassed and sad too. He wanted to attend his two day visit badly, and my heart ached for his. He was ok though, a jumble of being bummed out and relieved at the same time, not to have the visit looming ahead.

Maybe we'll try again in a year, or maybe for high-school, or maybe never. Who even knows. What I do know though, is that I had to do a lot of thinking and change my perspective about what future might be like for my son in a hurry.

Look at my cute guy. We have been working on independence these days. He loves to go to the library, search for his own books and games, put holds on items,request things, and check material out himself. Life is actually starting to look up. 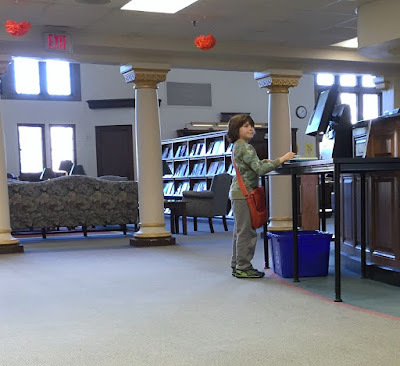 I keep reminding myself to put it into perspective, that he's only a 5th grader. Things will be ok. He's just a kid. Kids change daily. 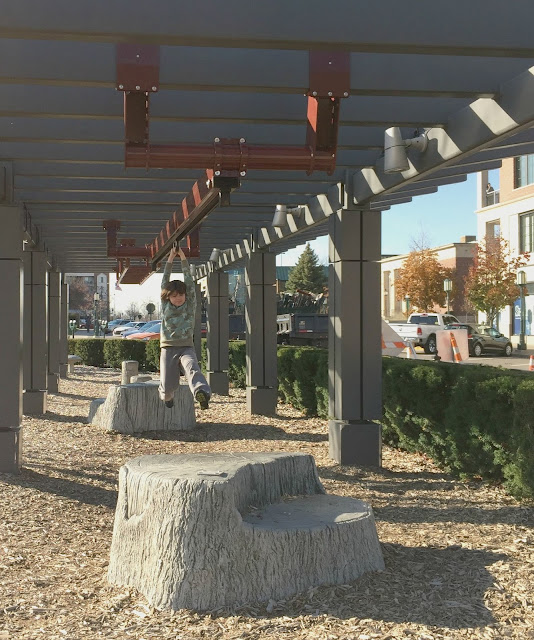 So here's the basic update in a nutshell. In the vein of re-thinking my perspective, we might have recently found the perfect situation outside of Noah going back to school and it's certainly something I never even realized existed!

"Kevin's" is the first place that Noah has been willing to go to without me since last September. Well, he did go to my Mom's house for a couple of hours twice, and to a good friend's house once, but other than that, in seven months, Kevin's is the only place. To me, it's a miracle! It took time and trust and a false-start, but he did it. Noah did it! :)

Kevin is unlike anyone you have probably ever met. He is the LOUDEST person you have ever met. He will be the first to tell you that he has ADHD, but he won't have to tell you, because you'll know. I laugh out loud CONTINUOUSLY every time I go to Kevin's and I wish that just like Noah, I could be a student there. Kevin used to teach at Noah's old school quite a few years ago. He has a way with students that are struggling or difficult to reach. He inspires them to learn and even more so, to find self-esteem, pride, their own voice. It might be his beautiful operatic singing and how he belts out...snicker worthy ditties, or the fact that Kevin can impersonate Bobcat Goldthwait and an angry Frenchmen like nobody's business. Or maybe he's just real and kids respect that. I don't know how he gets so many kids to do willingly do their work, but he does!

Apart from being a teacher, an author, a life coach and world-wide public speaker and expert on ADHD, Kevin has also run a study group of sorts for middle and high school students for the past fifteen years. Now, including Noah, there are about four regular homeschoolers who come for learning and guidance from Kevin too. The hours and days are a bit unconventional, but once you get used to it, it's great! Noah attends five days a week with the other middle school and high school homeschoolers, Sunday through Thursday from about 1:30- 7:30. I still select Noah's curriculum, prepare it and homeschool him Monday through Friday, but when he goes to Kevin's, Noah brings additional school work to practice or Kevin gives the students his own learning materials.

It's great, the homeschool kids work for a while, and then around 3:30, the study group students who attend surrounding schools start to trickle in. They come to socialize, work on homework with Kevin and do group study. Some days there are ten additional students, and often 15 or even 20! Noah is the youngest, Jon says it's like having 15 older brothers and I have to agree. :)

At Kevin's Noah is learning, but he's also gaining independence from me and has the social interaction that he enjoys. Kevin helps him to talk out his feelings and work on any social conflicts he might have with other students. There's a lot of good "life skills" talks too and talks about maturity and taking responsibility. I love that.

One amazing, surprising, wonderful side effect of "going to Kevin's" is that Noah has a new found skill and appreciation of and for  INDEPENDENT WORK AND STUDY SKILLS!!! (WOO HOO)!!!!!
One of my goals for Noah, as we head towards middle school, is teaching him how to work independently. My kiddo is great, but independent working has never been one of his strong points. Now though, suddenly, like...overnight....it is!!!

At Kevin's he sees all of the middle and high school kids studying and doing homework, and from what I gather through what Noah has said, he wants to just be "one of the guys" and do his own, "mature" work too! :)
LOL. That's all it took. And each time he goes, I send Noah with a check list of the work he must complete, and he does it!

AND THE NUMBER ONE GREATEST THING....... NOAH IS NOW HAPPY!!!! \(^-^)/
For a while he was the little sad boy, and now he feels like the stronger, happier, more growing up-ish version of himself. He can't wait to "go to Kevin's" each day and he has made some really nice friendships and self-esteem along the way. I love Kevin, I can't thank him enough for offering this alternative learning environment as an option to families and children that need something different. 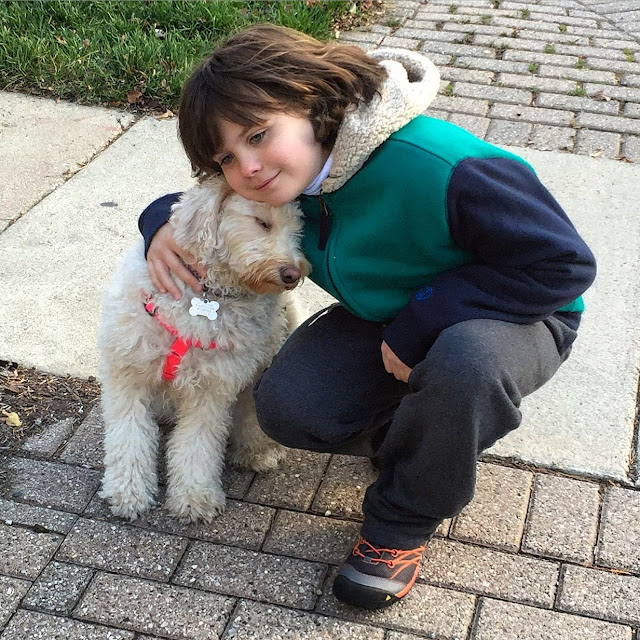 Until next time, learn to change your perspective and you just might find a beautiful, new view!!!!

Email ThisBlogThis!Share to TwitterShare to FacebookShare to Pinterest
Labels: homeschool