More Ups and Downs and Great Holiday Gifts for Kids!

** This post contains some Amazon affiliate links. For a full explanation, please see my complete disclosure HERE!Thank you!!! :) **

Many days there are tears. Noah is  frustrated and angry with himself for getting into this muddle.   Often he dislikes the workbooks that we use and dislikes the online learning games and dislikes the hands-on activities that I ask him to try with me.  Some days Noah feels sad and doesn't want to work and I usually lay my head on the table wondering when things will get easier.  But then it passes and somehow, I convince him to start again, and we both do. This is not an adventure down a straight road. I know it'll be a curvy and bumpy path with ups and downs, and that's ok with me. As long as we just keep moving. Suddenly and unexpectedly becoming a homeschooling Mom has not been easy, but I'm trying to stay positive.

Today was a little better. There were no tears! I sense that our routine is not feeling as foreign and overwhelming anymore. Each morning we open my big lesson plan book and look at our day to come. I let Noah choose which subjects we tackle first. I get my coffee, he gets his chocolate milk. This morning Noah asked me to take this picture and caption it: " I'm not living the thug life or the pug life, but I'm living the #huglife." Then he was really with himself for coming up with that. :) 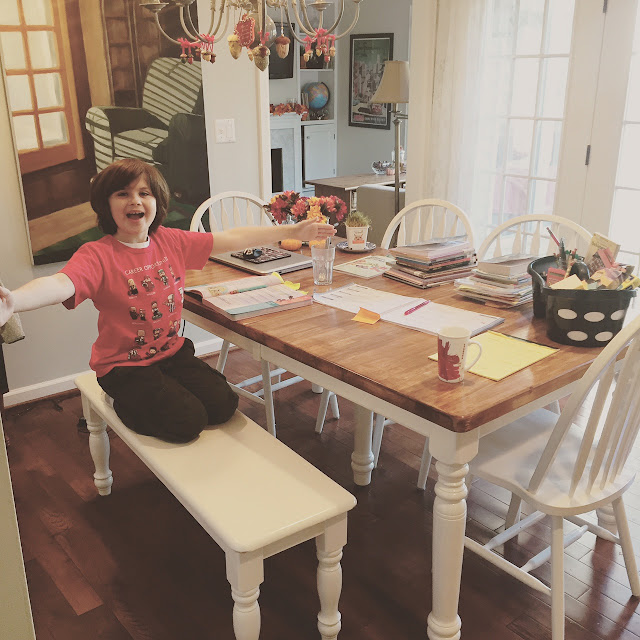 Homeschooling has given us the flexibility to have some real-life adventures and to learn new skills. For example, yesterday I taught Noah how to pump gas for the first time. I helped him the whole way, but he was really proud. We watched the pump and discussed the number representing gallons and the number representing the amount of money being spent on gas. Today we went to vote! Noah rode his bike over to a nearby school and followed me and my secret ballot into one of the little booths. He watched as I fed my ballot into the machine and at the end. A nice volunteer offered both of us a "I voted" stickers. I was shocked when Noah accepted the sticker, something he never agrees to. He even proudly stuck it to his shirt.

Tomorrow is Jon's birthday. So during school time we sat down and collaborated on a big, homemade card. We used scrap booking paper and construction paper and colored pencils. Noah drew a picture of Jon's car, a griddle, a frying pan and a grill on the front. We're going to give to Jon with our gift in the morning, a Korean cookbook by one of our favorite YouTube chefs Maangchi!


Today a really really neat thing happened though! Session two for GamED Academy opened up! This made Noah very happy and he can't wait until his Castles and Cannons and Einstein's Space courses officially begin next week. Six-weeks of online history and science classes partially taught with Minecraft! It's quite an interesting way to get kids interested in learning. There is text that you must read each week and quizzes, but also "building" assignments and group work. For example, I think they will have to build one kind of medieval structure or other together, after completing the readings. It's really neat.

Each week I've been asking Noah: "Noah, what do you want to learn this week?" His response this time around: "I want to learn about hyenas, how World War Two started, about Greek Gods and goddesses and how the Colosseum was build." 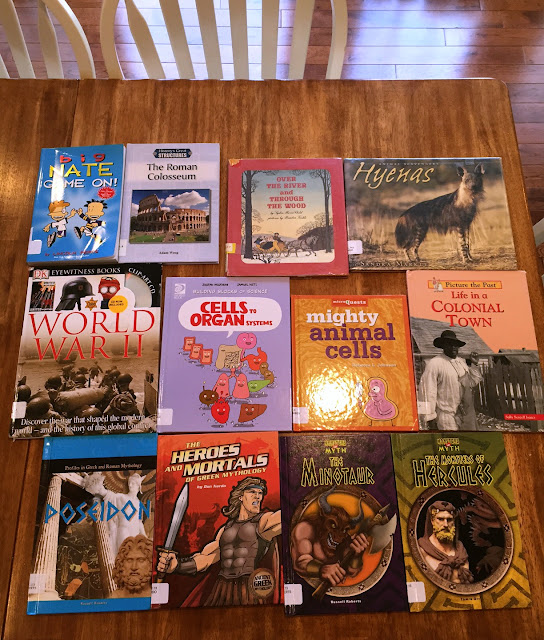 He's almost done with his D.E.A.R. book - "drop everything and read" book. We do that everyday. Noah's reading "Percy Jackson and the Last Olympian," and as a treat for finishing up the first series, we're going to watch the second Percy Jackson move, "Sea of Monsters" on Friday. The library is great, they have everything.

I made a delicious new recipe for dinner tonight! It was Honey-Lime Sweet Potato, Black Bean and Corn Tacos from Cooking Classy. I found the recipe on Pinterest and you can find many more like this on my Vegetarian Cooking for Board.

(This photo came from Pinterest. Find the complete recipe on CookingClassy.com)

It was the easiest recipe ever and the tangy lime and sweet honey flavors add such a harmonious surprise. I loved it! It's a medley of veggies that you top with a tiny bit of feta and cilantro if you'd like. We also added in avocado. I can't wait to eat this again.

This week I had Noah read about and recreate the Colosseum in Minecraft. Everything is square in Minecraft so he had to improvise a curved shape. I think he's off to a nice start! 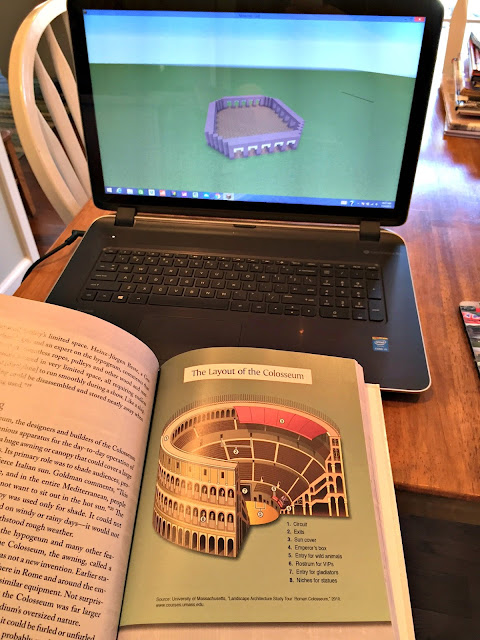 We have been playing board games sometimes when we want to take a break in-between academic lessons. This is our current favorite, Labyrinth

!!! Labyrinth was sent to us last year from Noah's Uncle Bill and Aunt Pat. Aunt Pat is a children's librarian and she ALWAYS finds the most amazing gifts. She's really in the know of what kids like and which products are are wonderful and well made. Labyrinth is for children ages 8+, but truthfully, it's a great game for adults to play with their kids too! 1-4 players compete to collect all of their treasures throughout the game board. The labyrinth is an ever changing maze because with each player's turn, you have the option to move one tile around, hence changing the maze. It's a fun puzzle type game that helps you learn to think ahead and use strategy. This would make for a wonderful holiday gift for any boy or girl on your list. 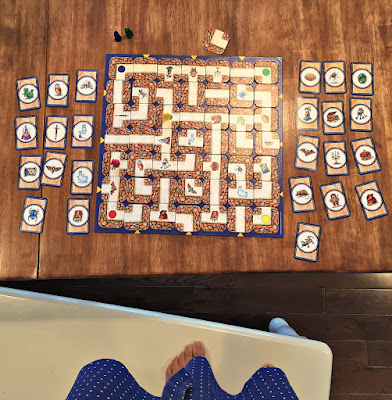 I've been trying to do more hands-on learning. Noah responds to and learns a lot more I've found from "doing." This day we continued to explore the earth and its fossils and gems. There was some book reading and  then treasure hunting. The National Geographic Kids Everything Rocks and Minerals Book

is one of our favorites with all of the bright and colorful photos. There's also interactive quizzes and puzzles inside. And, the Basher: Rocks & Minerals: A Gem of a Book

is another ultimate favorite of Noah's. Each page is a different rock or mineral character that tells you all about how he or she is made and about their properties and uses. It even comes with a cute poster! The whole Basher series is fantastic. Check them out, there's every subject available that you can imagine.  We played with Noah's digging kit, it's the GeoCentral Excavation Dig Kit - Treasures Of The Earth

. I really like this set, it comes with a big hunk of sand like material, a couple of tools and a display case for the twelve minerals hidden inside. Noah is working his way through excavation one-by-one. 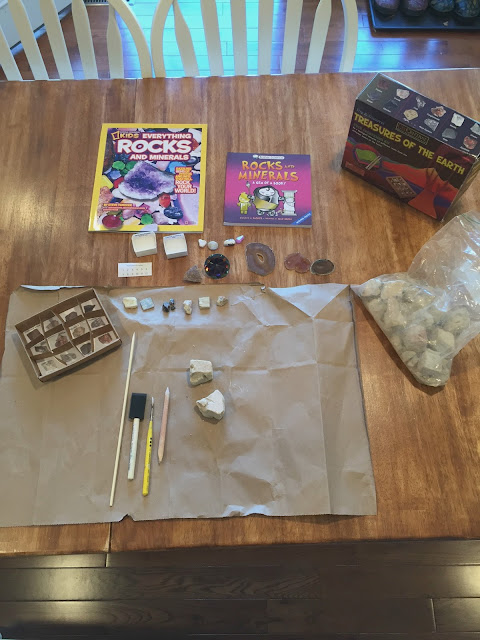 Recently I've found (and maybe Noah has too), that he really enjoys cooking. I try to bring math into every recipe that we make. For example, last week we needed to double a recipe, so I had Noah figure out the doubling of fractions on his own like 2/3 cup doubled. It was fun. Here we're making a very very simple but delicious frozen yogurt snack. I taught Noah how to make a piping bag! 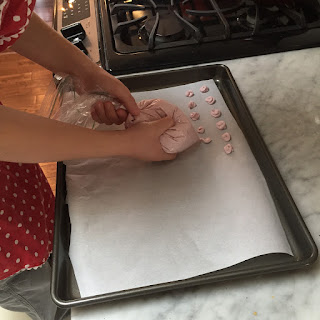 We simply put two containers of strawberry Greek yogurt into a ziploc bag. Then we cut off the tip and I had Noah pipe onto a parchment lined tray some healthy style "dipping dots." We froze them for an hour and the voila'! A healthy, snack with some protein and calcium. 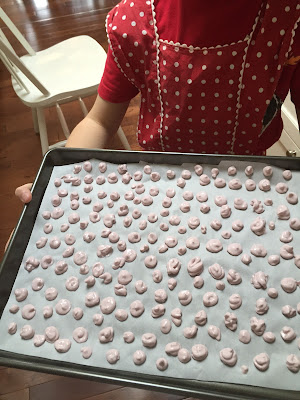 We really want to keep up with STEM learning. (Science Technology Engineering Math). On this day I tasked Noah to make a Lego candy dispenser. We watched some video and looked at ideas online and then I let him go to work. Hector was reeeeally interested too. 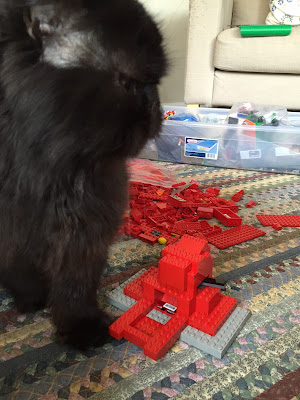 . This particular circuit that Noah built plays space invader noises that you can change. This is yet another, FANTASTIC gift for any child or teen in your life who is interested in learning more about electronic circuits and how they work. 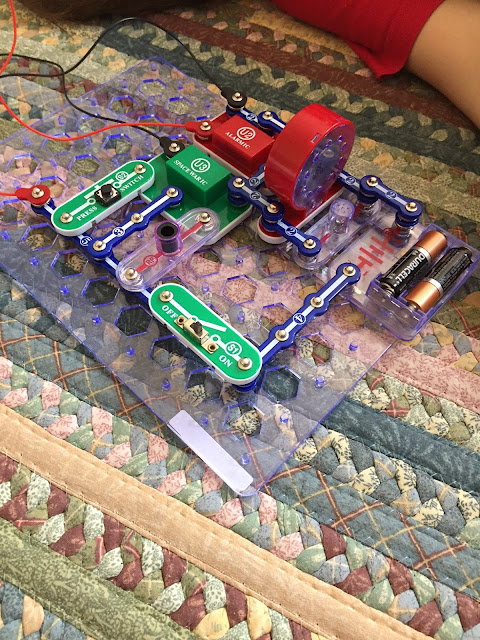 And, for our American Tales unit, Paul Bunyan came over to visit Josie. 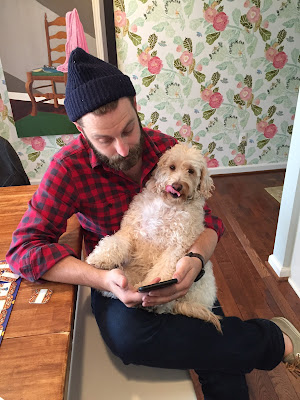 And that's the scoop! And now I'm exhausted!
Until next time, have lots of fun doing lots of things. :)
xoxoxoxoxo,
Lauren

Email ThisBlogThis!Share to TwitterShare to FacebookShare to Pinterest
Labels: homeschool