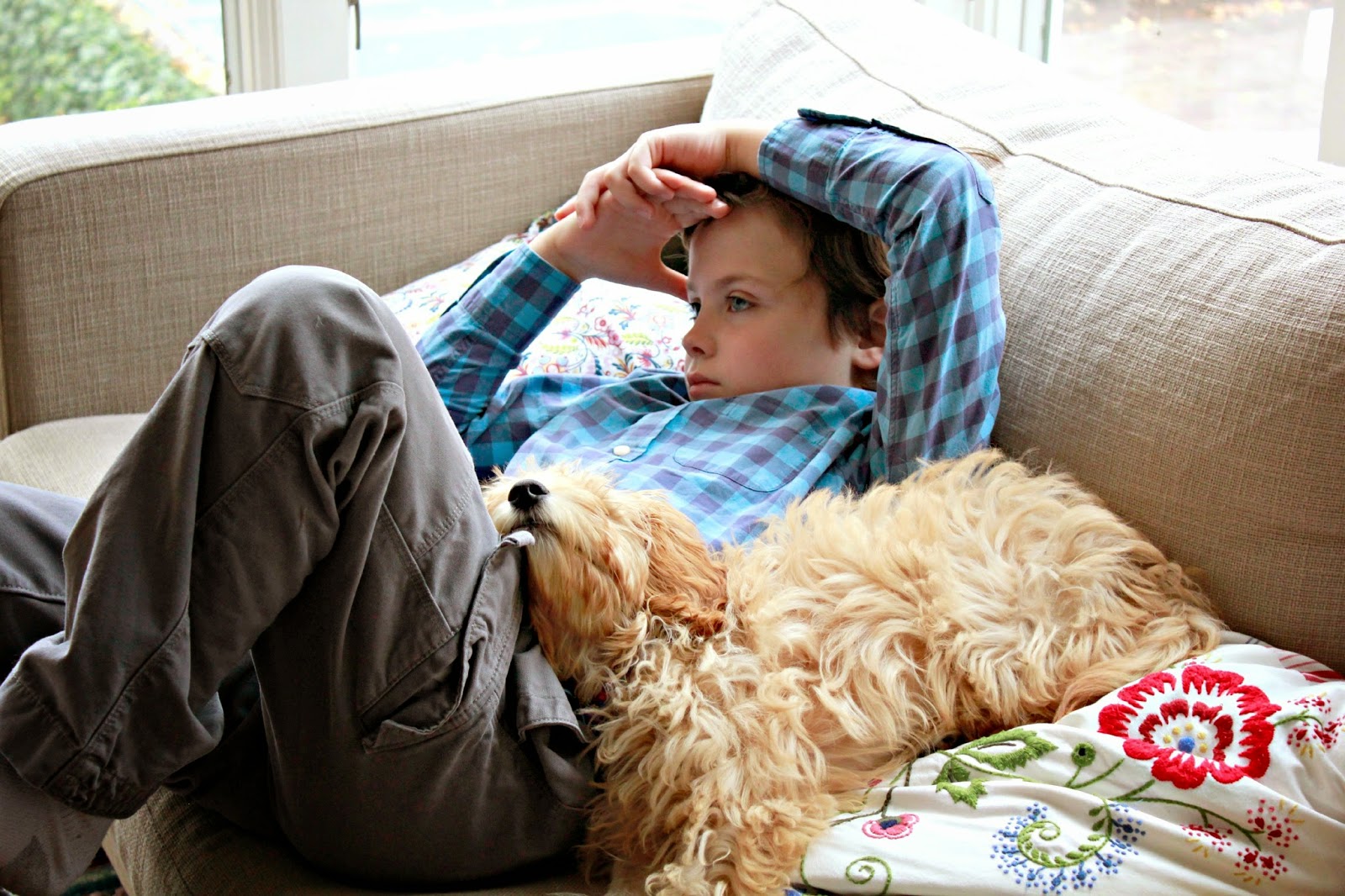 Thankful for puppies who have stopped chewing on everything and EVERYONE. And a boy who has now formed a special friendship and bond with said puppy. After she stopped trying to chew him ...... (Their current obsession: watching Full House reruns together.) 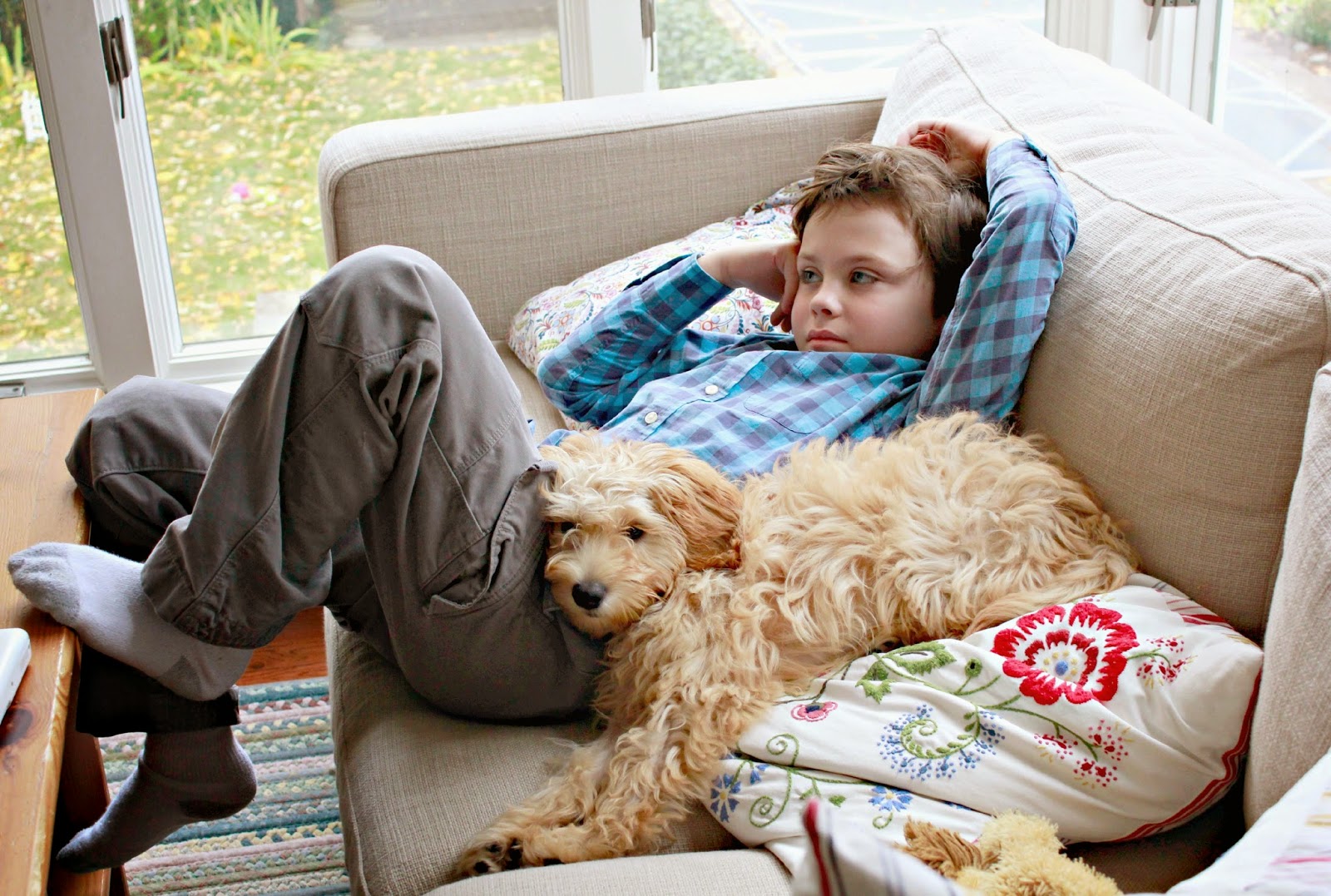 Grateful for the discovery that when puppies continue to wake up at 6:00am, even on weekends- after a quick potty trip, you can get them to go back to sleep if you snuggle on the couch. 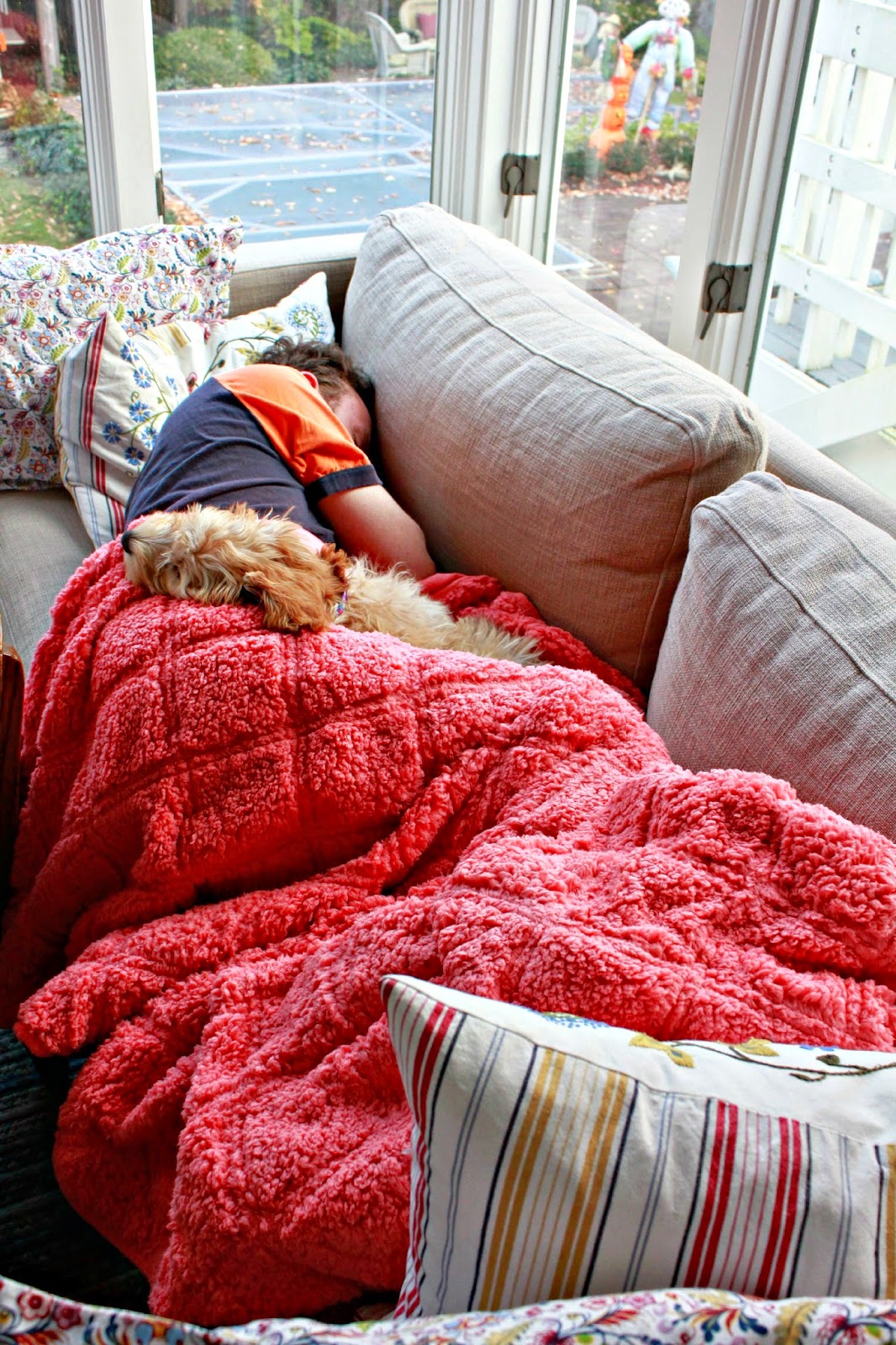 From the cartoon "Adventure Time." One of Noah's favorites! 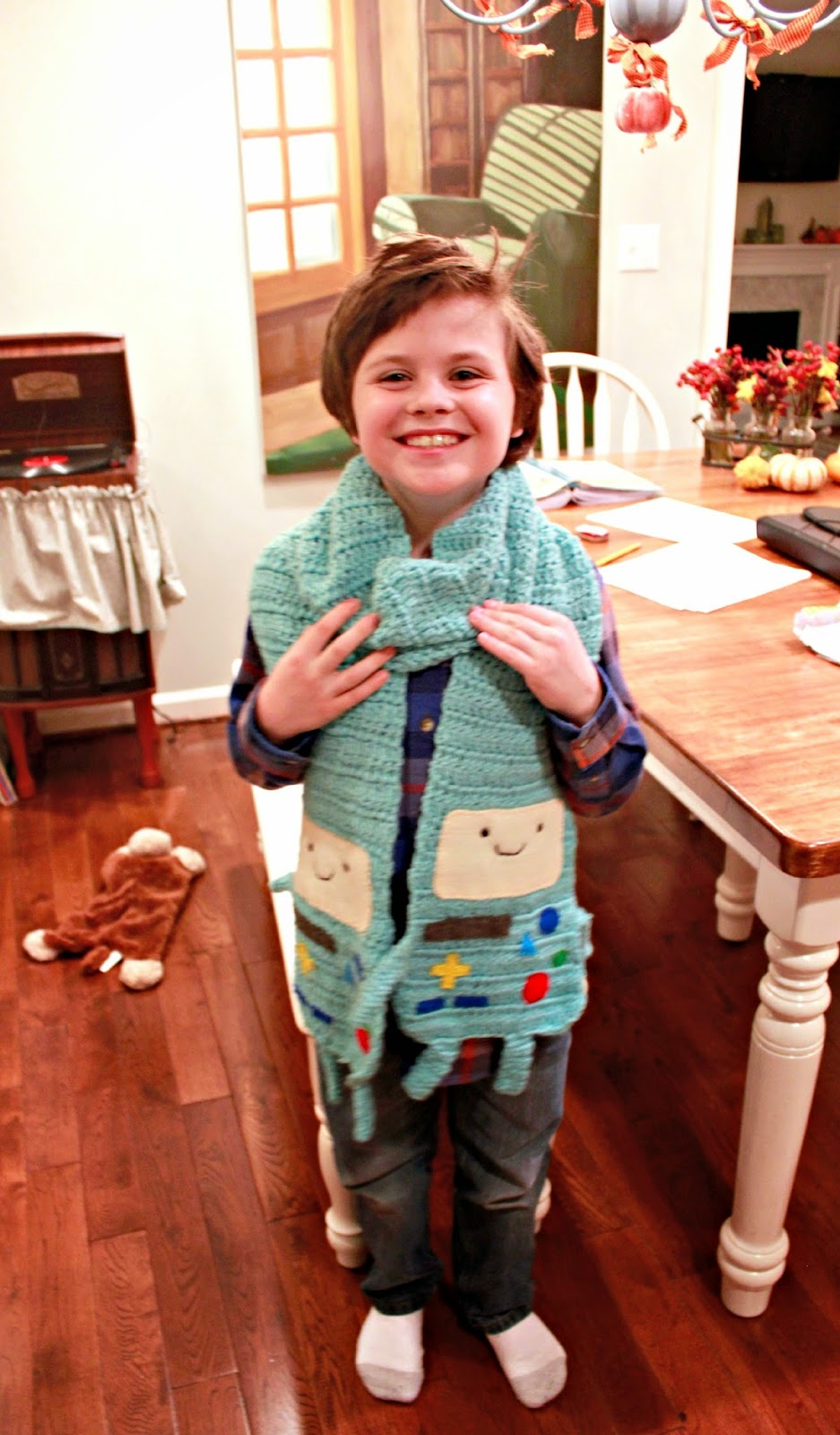 Speaking of birthdays!!!! I'm grateful for TEN wonderful years with this guy! :) And for the early birthday morning present opening party. And REALLY grateful that when he woke up the first time at 4:30am, he knew on his own that it was TOO EARLY to wake us up. 6:00 am was a much more human time on a Sunday morning! (Not really, but I'll take what I can get.) 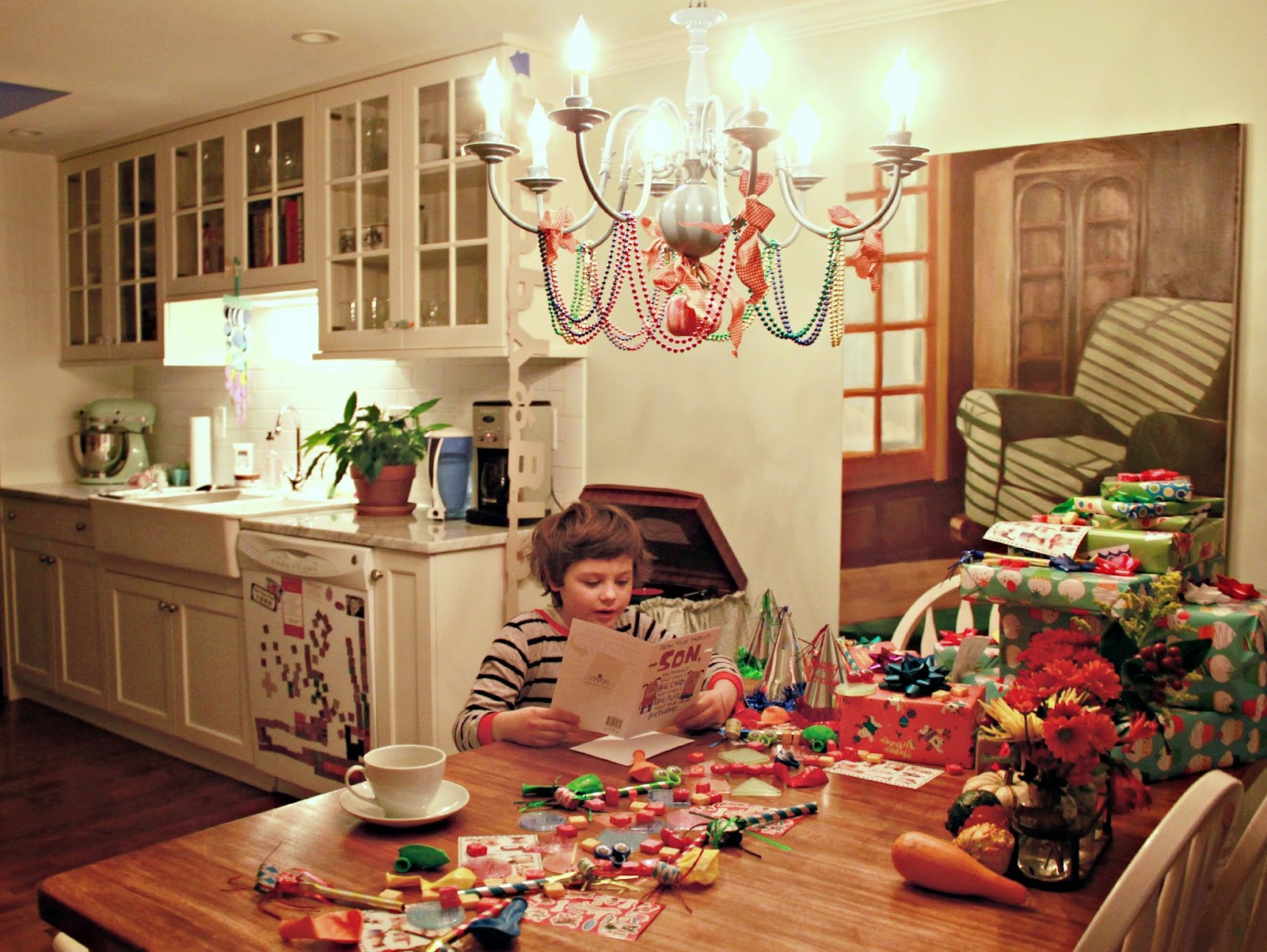 I'm very lucky to be able to capture that look of childhood thrill when opening the present that you wanted so badly.  And HOW did that wrapping paper fly up like that!? Weird! 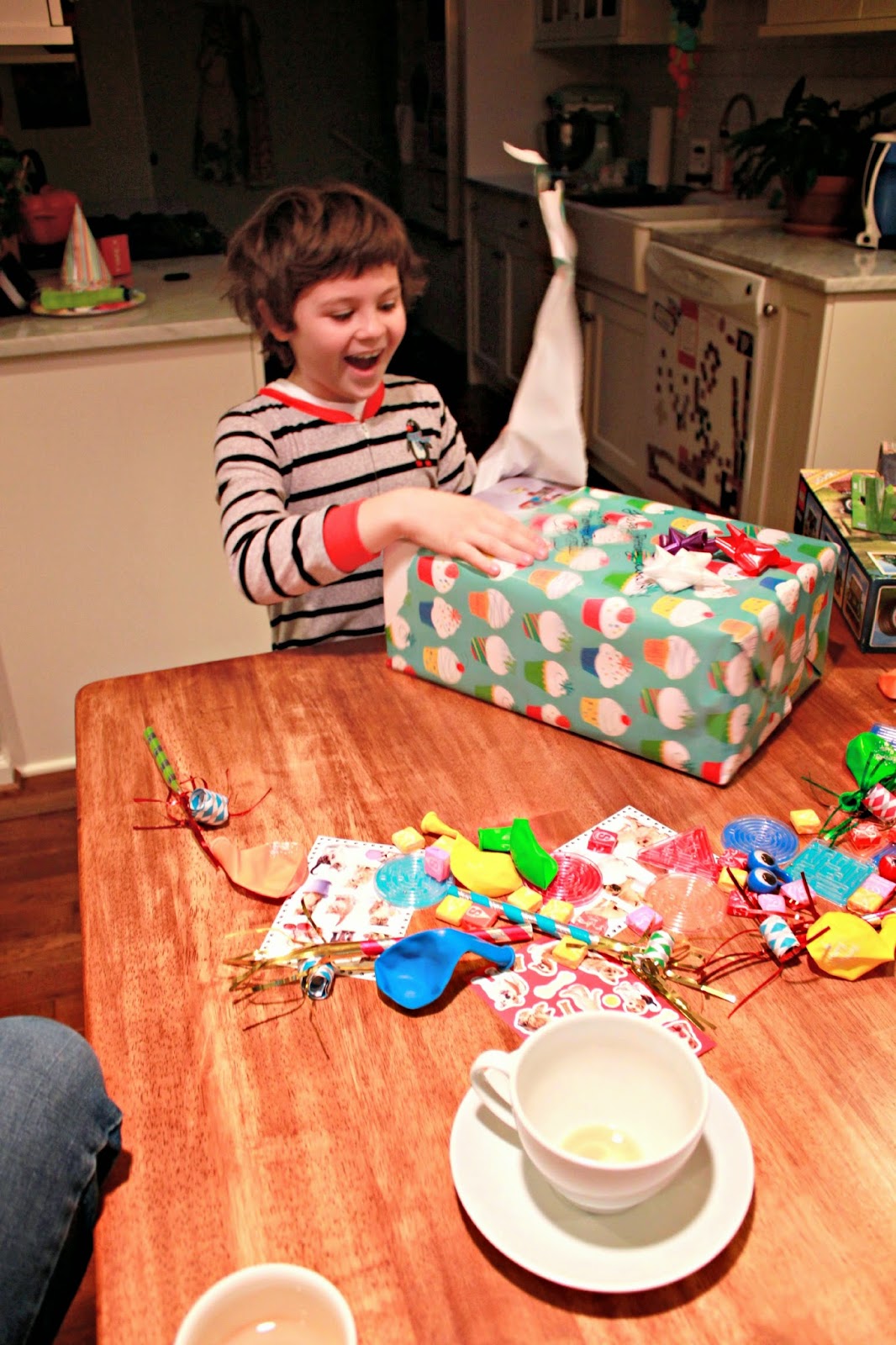 And honestly, what is truly more wonderful than having one's Grandparents gathered around him to help celebrate?
\(^-^)/ Isn't that nice!? We walked to lunch, a restaurant that Noah picked. He specifically went for the fire roasted asparagus and truffle pizza. That was YUM! 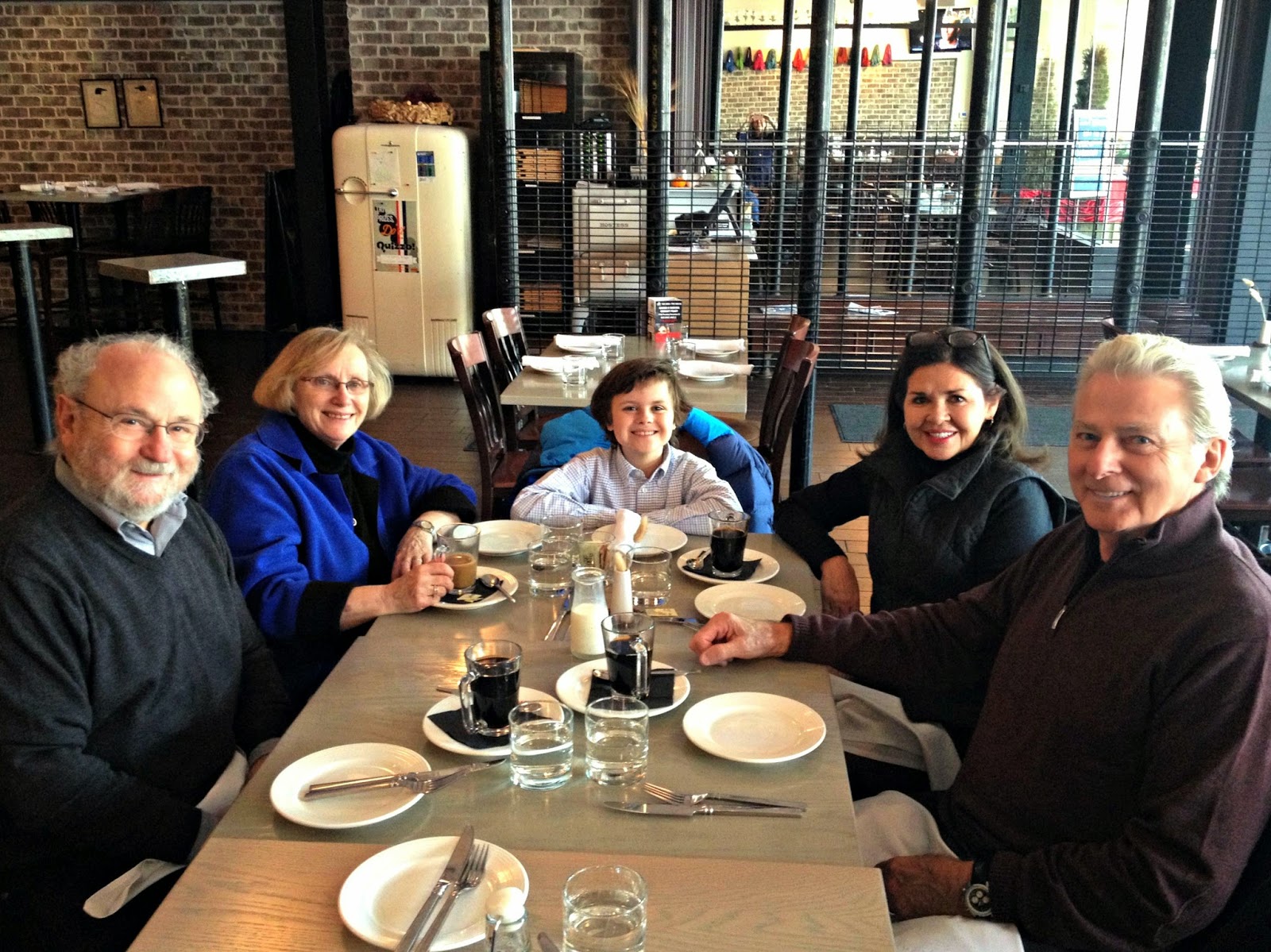 And finally on the Noah birthday front, I am grateful that these three guys blew out the candles together and I was able to get a shot in time! I hope his wish came true...... :) 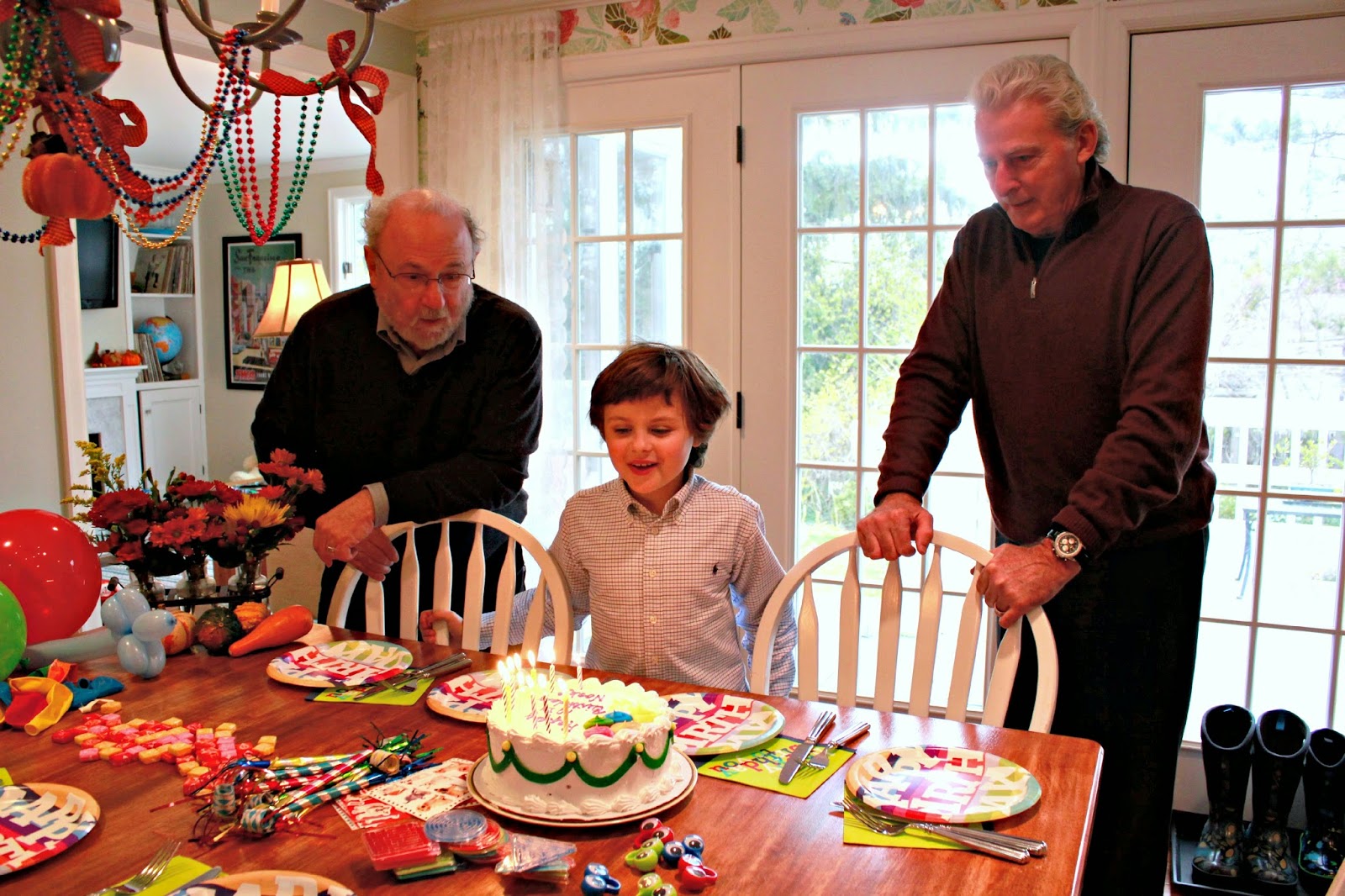 Moving on! Although to some people this might be a bit nerdy, or a small thing, I can't tell you how thankful I am for the bird watching in my backyard. I thought I'd have to stop for good, now that we have Josie. It was bitter sweet for me. I was feeling sad as fall began, thinking about all of the migrating and wintering birds I'd miss. Then though, I came up with a plan. First I took down all of my feeders out in the yard, under the pergola. I was going to try "controlled"small-scale bird feeding.  I'd only have a few feeders, close to the house, gated off below so that Josie couldn't get to the feeders or any of the shells that might drop. Jon bought me this great bird feeder pole! It's PERFECT! We also purchased some wire garden fence and fenced off a large rectangle below the feeders. So far, so good! Even the squirrels have steered clear because they can't climb the pole. I haven't seen a single squirrel in this area. 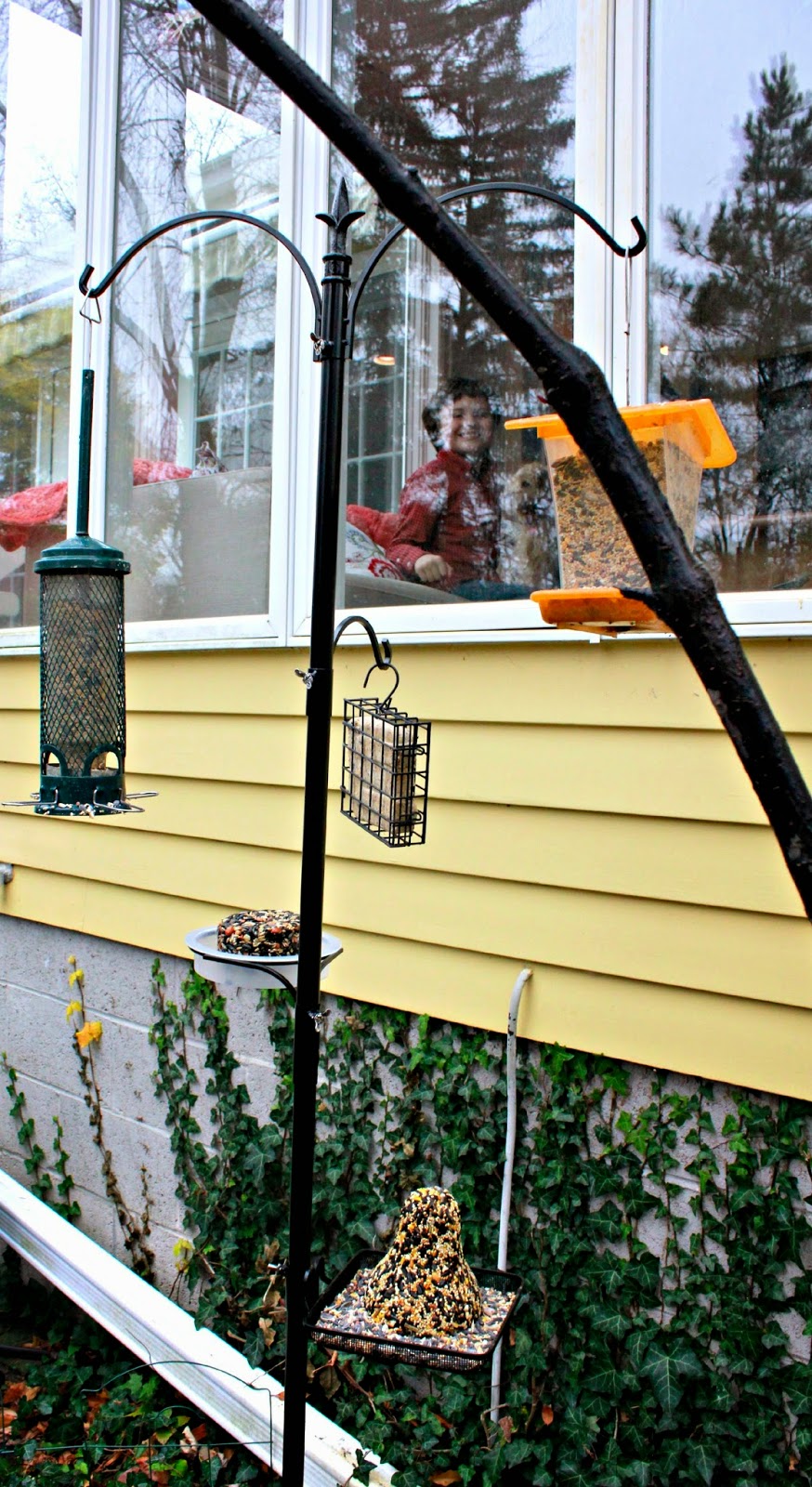 I could not believe my luck, when in just a few days, one of my favorite birds, the Red-Bellied Woodpecker showed up at my suet feeder! Isn't she pretty? 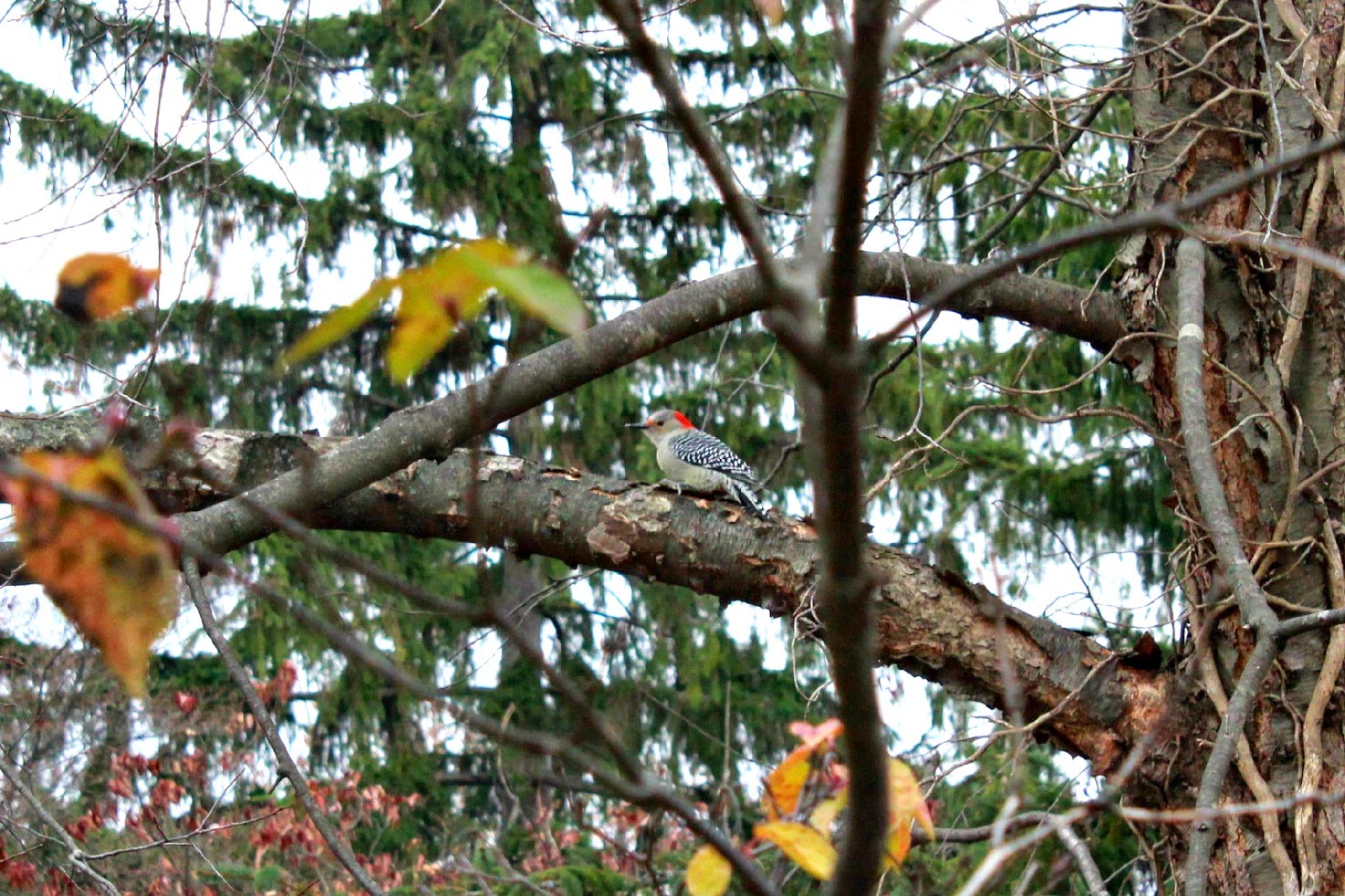 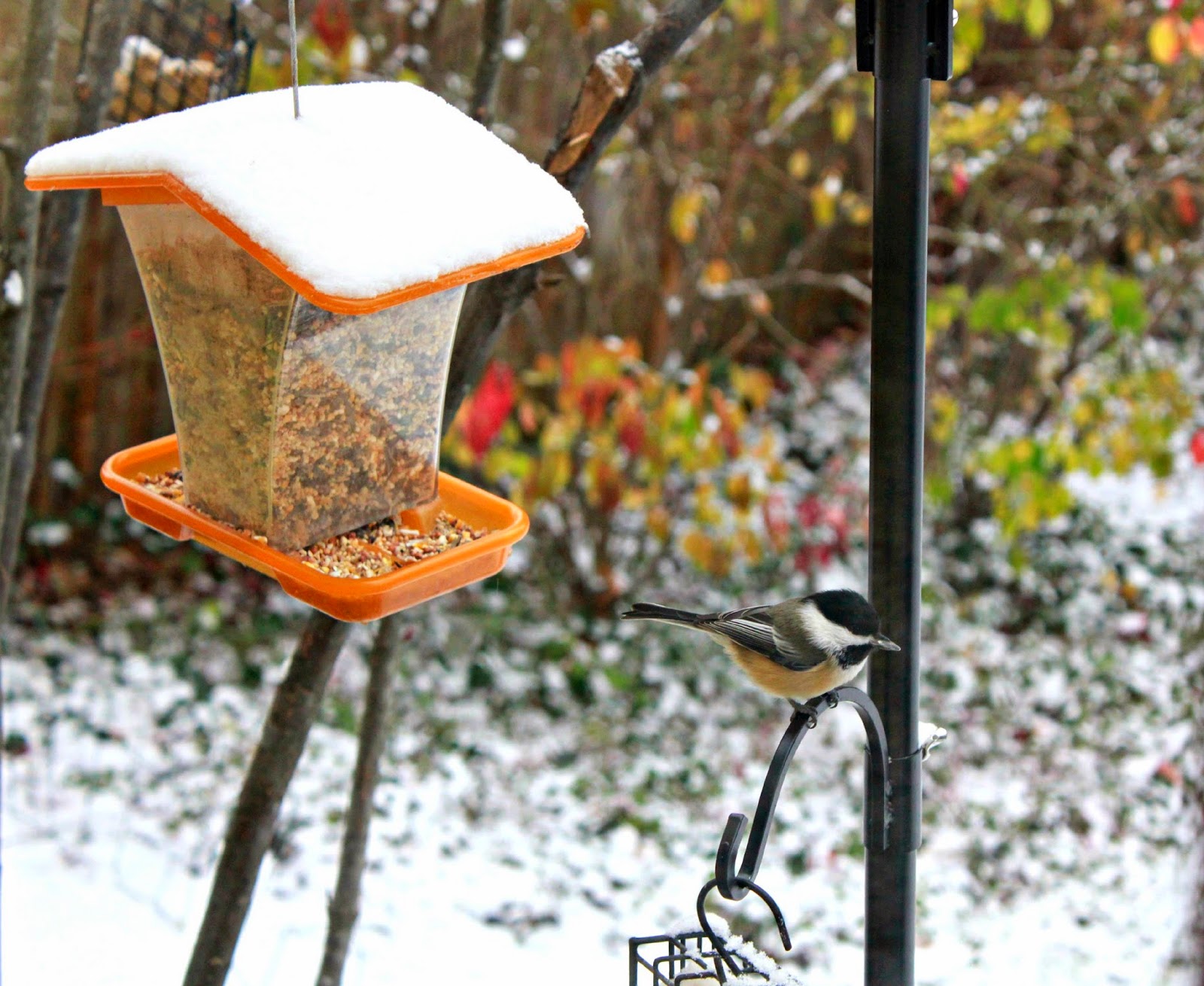 What, WHAT is more beautiful than a bright Cardinal in the snow? It makes me so happy. :) One great thing about the bird feeding and the bird watching, is that it's live television for Willow and Josie too! They love to "bird watch!" 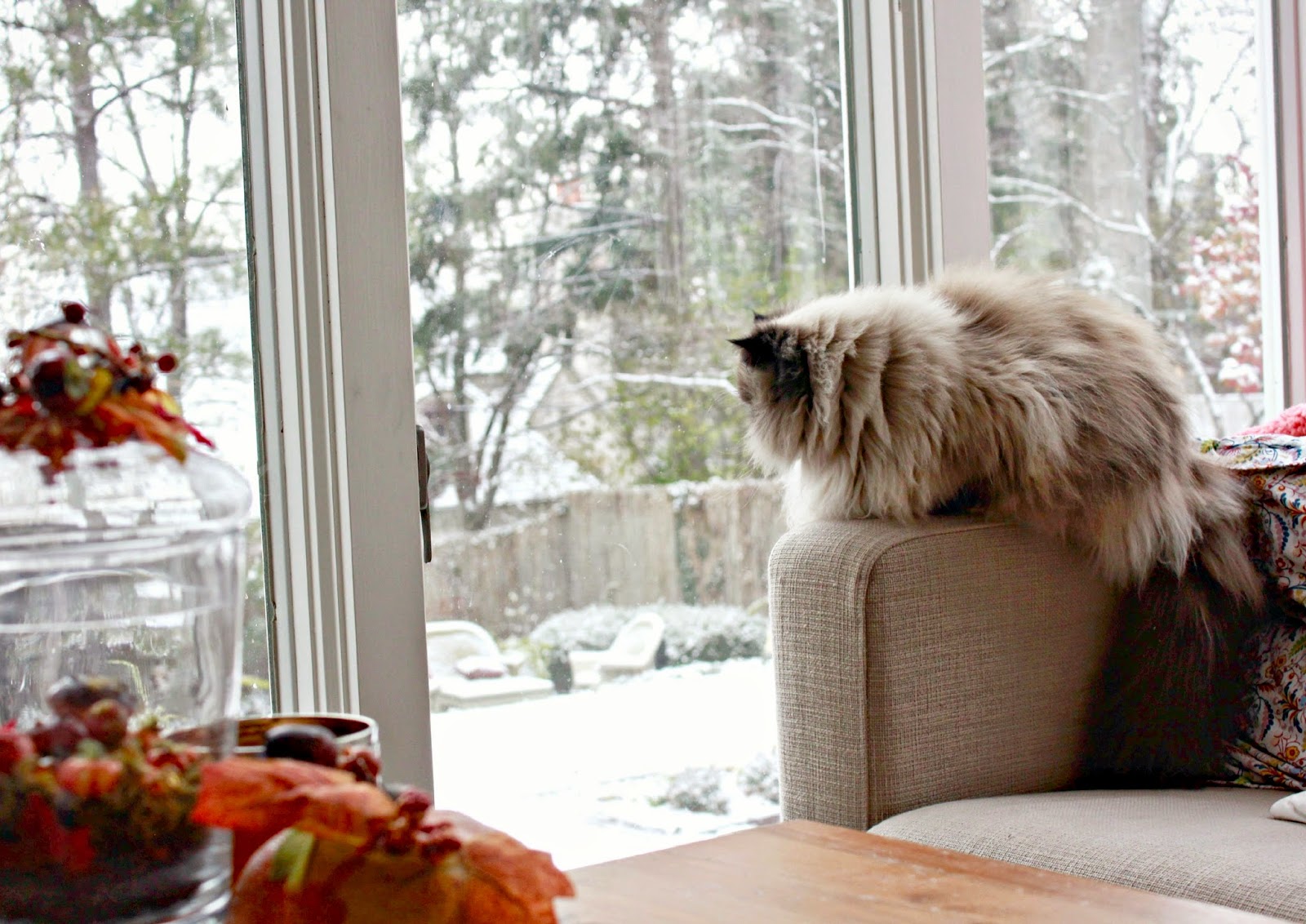 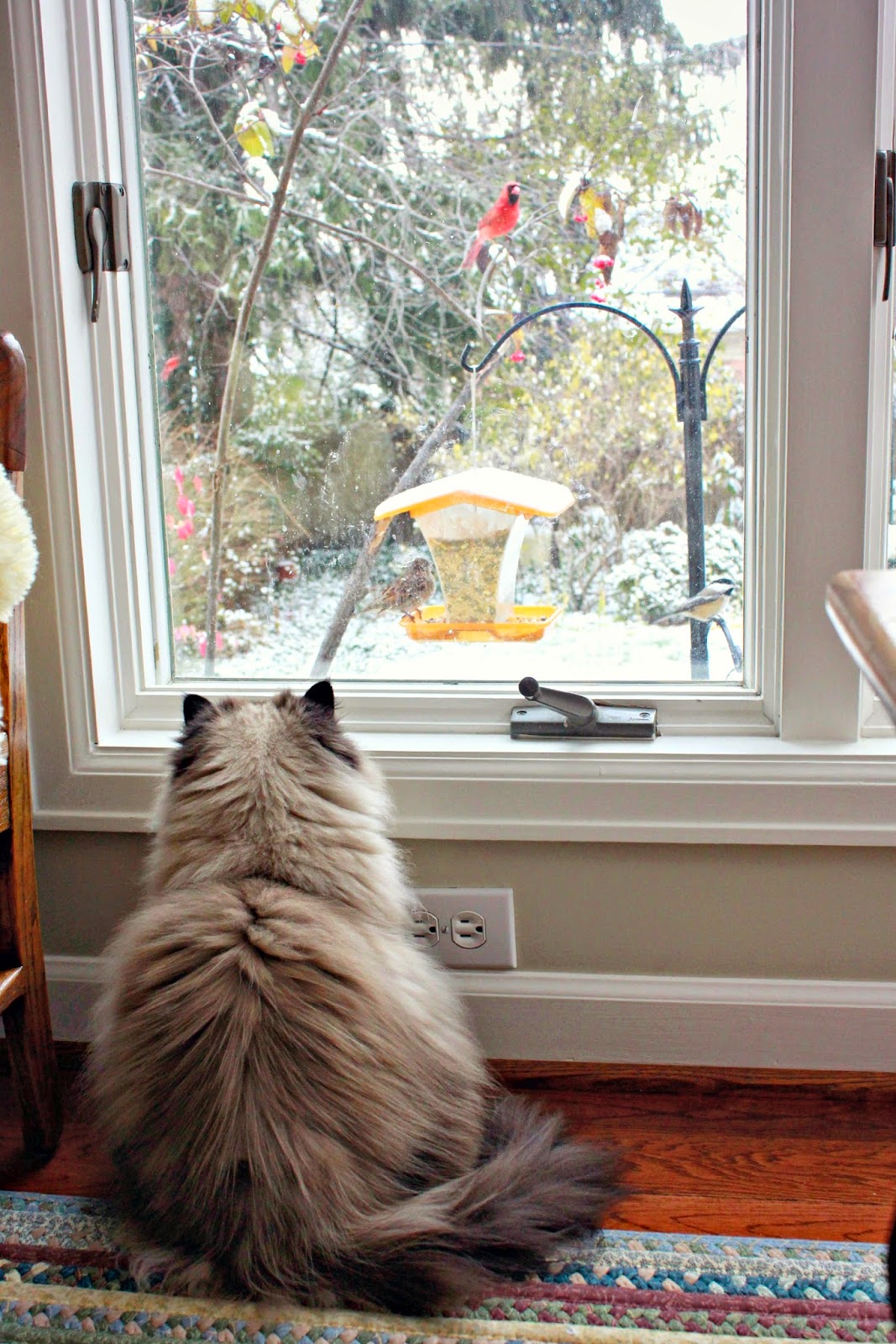 I am grateful for cute dog coats and the willing dogs that wear them. (Really, seriously, it's COLD here. Cold enough for a dog coat. Tomorrow's HIGH is 27 degrees Fahrenheit/ -2 Celsius.)

Which brings me to something else that I am very happy for - the SNOW!!!! I know that in public, I make small talk, and nod my head when other people say how much they hate the snow. I nod my head because I understand their frustrations, but truthfully, I happen to LOVE the snow! Sure, I agree that driving is treacherous (heck, I have a Mini!) and icy sidewalks are scary and shoveling is big job, but the beauty of snow, it's unmatched.

Every single morning that we can, which is most, Josie and I go out for our big walk. We do a 1.3 mile loop down into the neighborhood and up into town, which might not sound like a lot, but when your inseam is 4", it's a lot! Also, there is a big, long hill and lots of stops at every tree and fence and wall, so it takes us about 50 minutes. But anyway, it's always so wonderful. Yesterday we even saw a red fox with a white tail off in the distance in a park. And with the snow now, it's even more fantastic! Crisp, clean, morning air to start the day. It's definitely one of the best parts of my day, and I am really glad I get to do it! 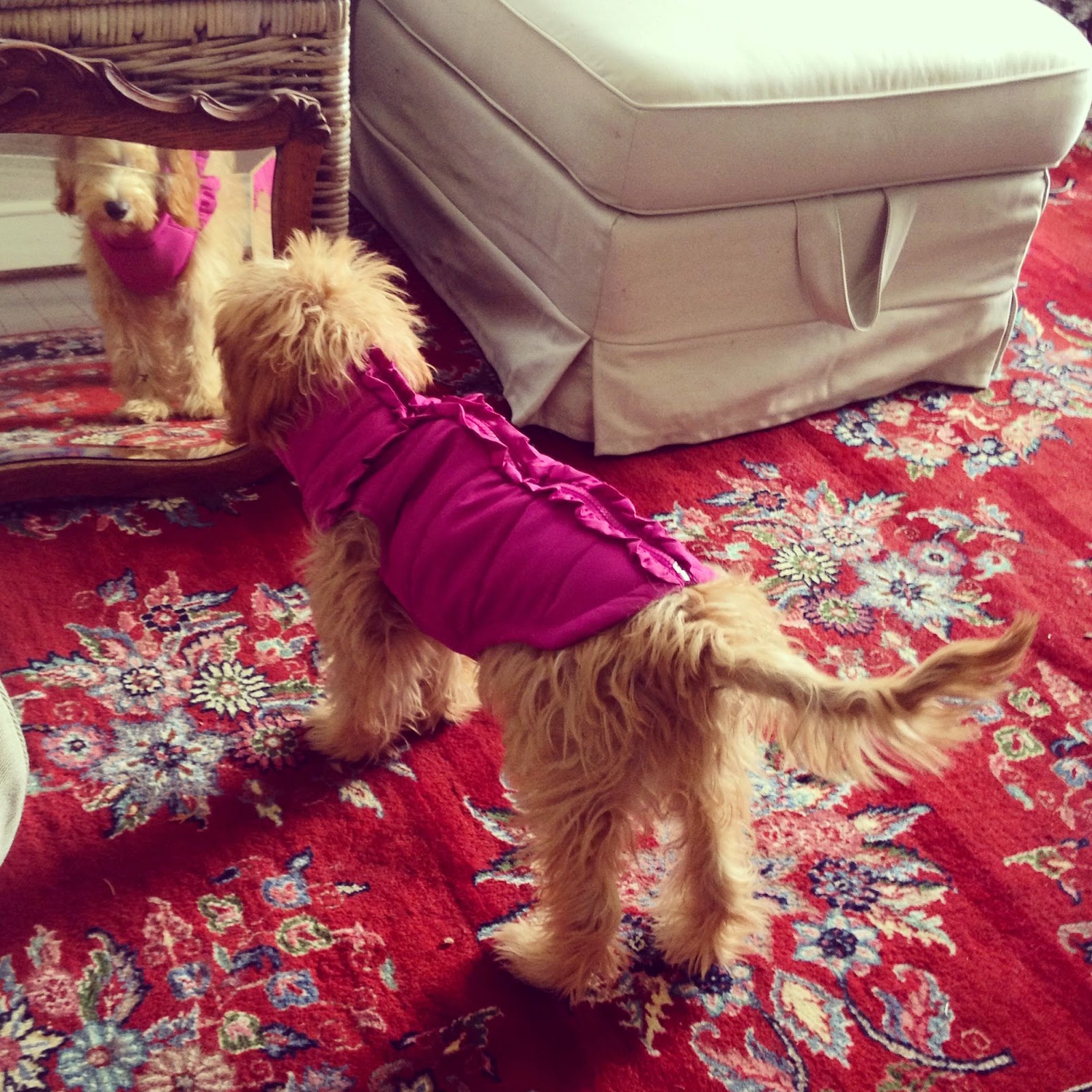 These photos are not in chronological order, but I was VERY thankful for a lovely fall, with fantastic fall foliage and gorgeous days so we could all go to the park. <3 p=""> 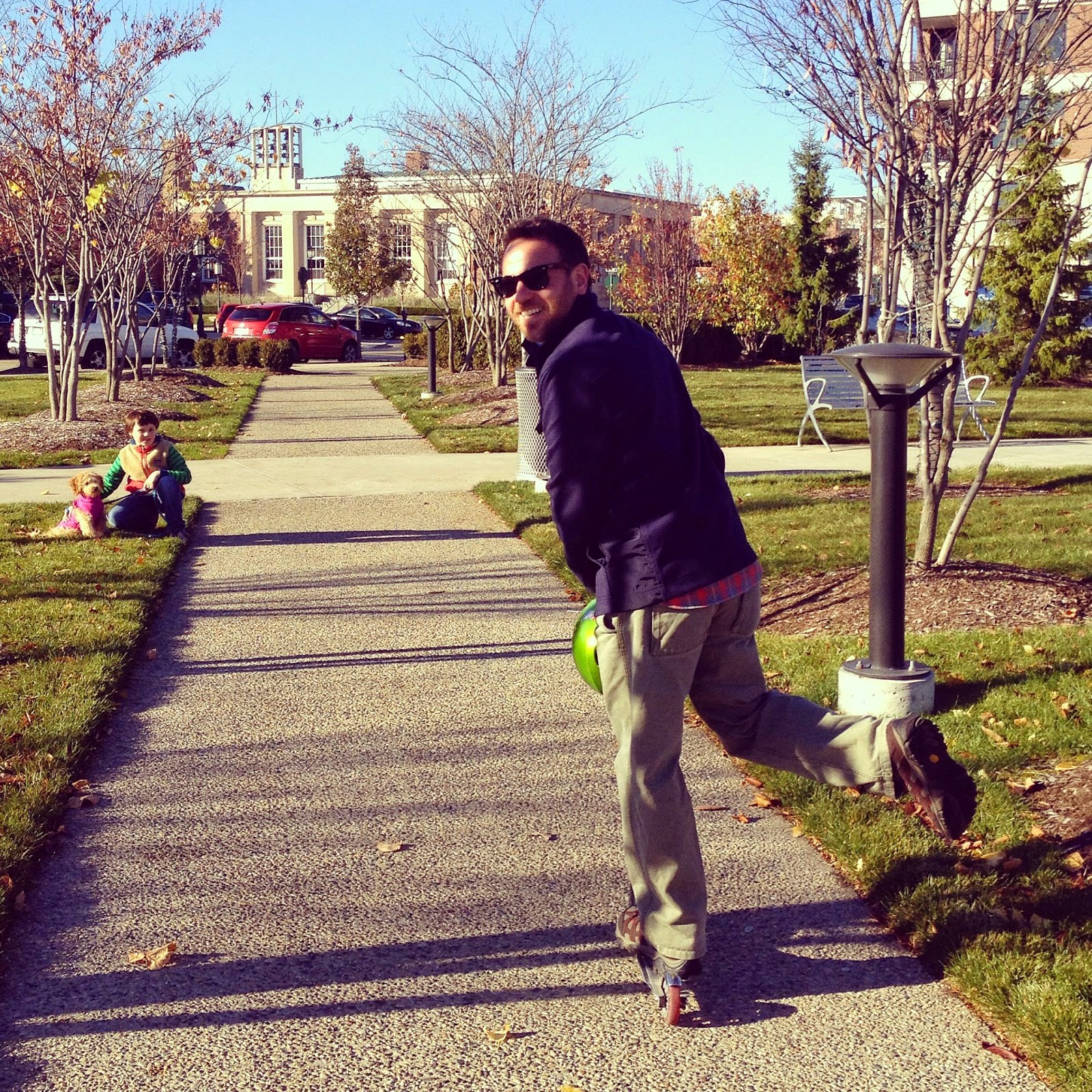 While since becoming a puppy parent, I haven't had as much time as usual to cook, once in a while you get in a nice dish. This was my take on the freshest Greek Salad I could come up with. Cucumbers, red onion, cherry tomatoes, olives, croutons, beets and feta. (Now I'm hungry just typing this!) 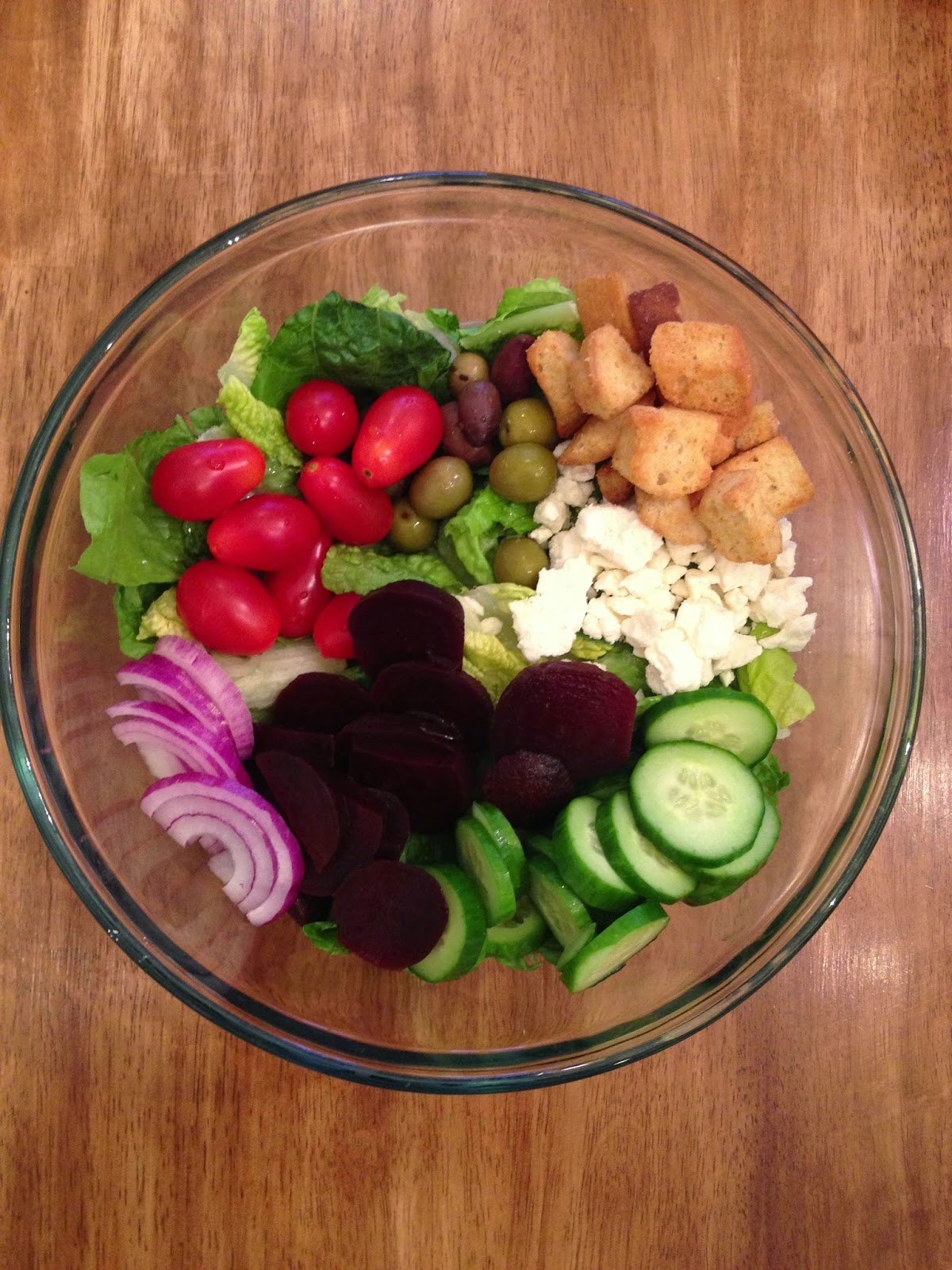 Ah! I was super grateful to have the right to VOTE! WOO HOO! Get out and vote! I don't know, every time, the exciting feeling never gets old. 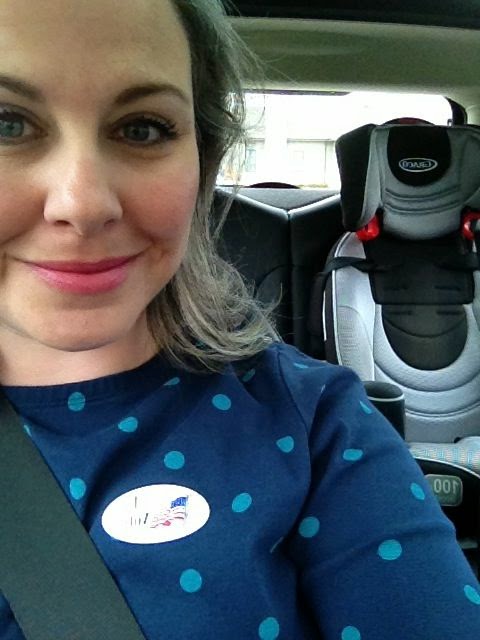 Another birthday! Actually, this was Jon's birthday, and his was a couple of weeks before Noah's. (These pictures are really out of order.) I am thankful for another birthday together with Jon. I remember him when he had just turned 19! I remember Jon's 24th birthday when we felt so OLD.... Lol. (We went to karaoke with friends. He was on crutches and sang Mack the Knife on stage.

This was an "invention cake." Meaning, I invented it. The cake was kind of lope-sided. It was a vanilla cake with coconut buttercream and chocolate chip filled raspberries for decoration.
We didn't do much for his mid-week birthday (Jon is not the biggest fan of making a fuss over his special day), but I did get to take him out for dinner over the following weekend. 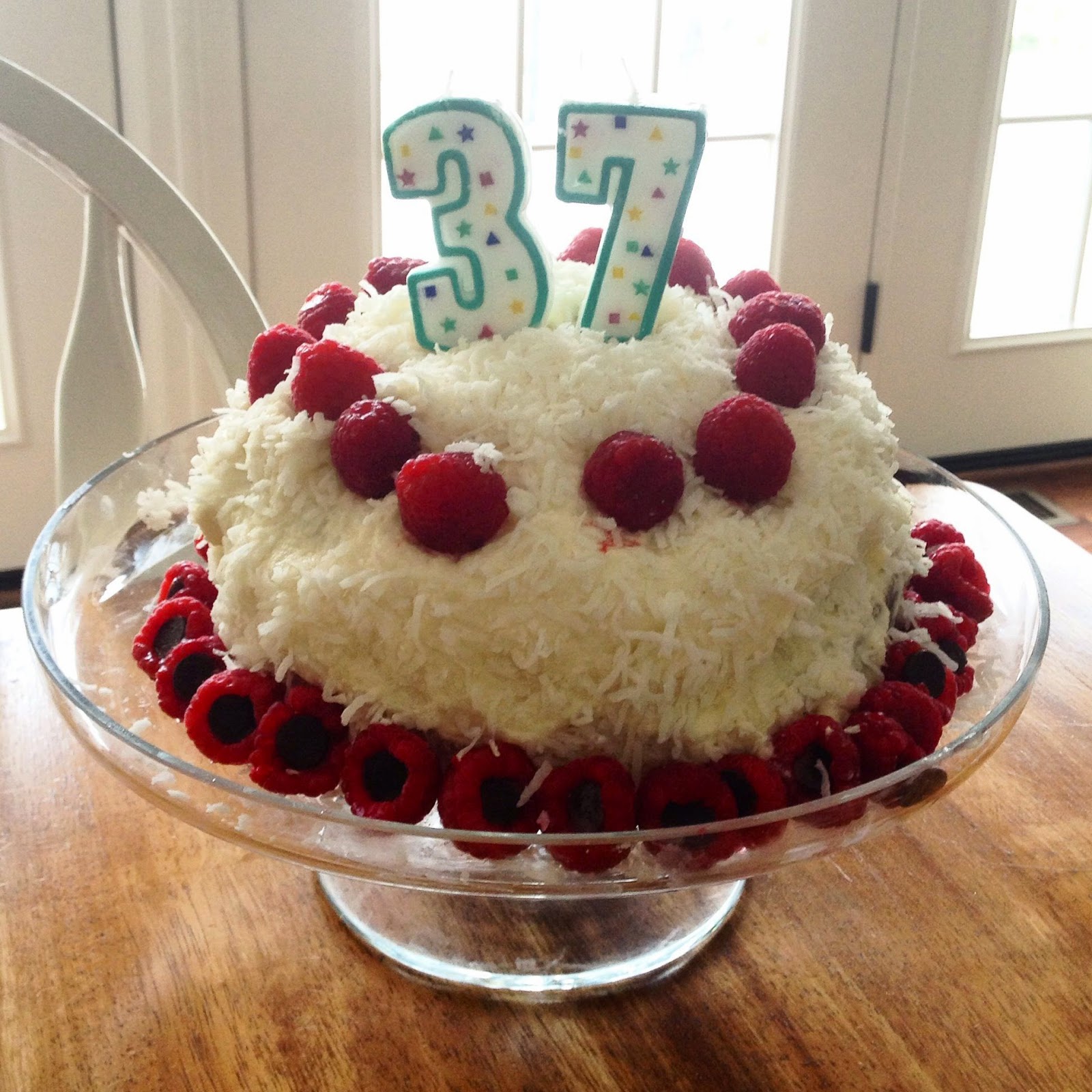 Times like these. I know they don't last forever.  Homework after dinner, together. So nice. 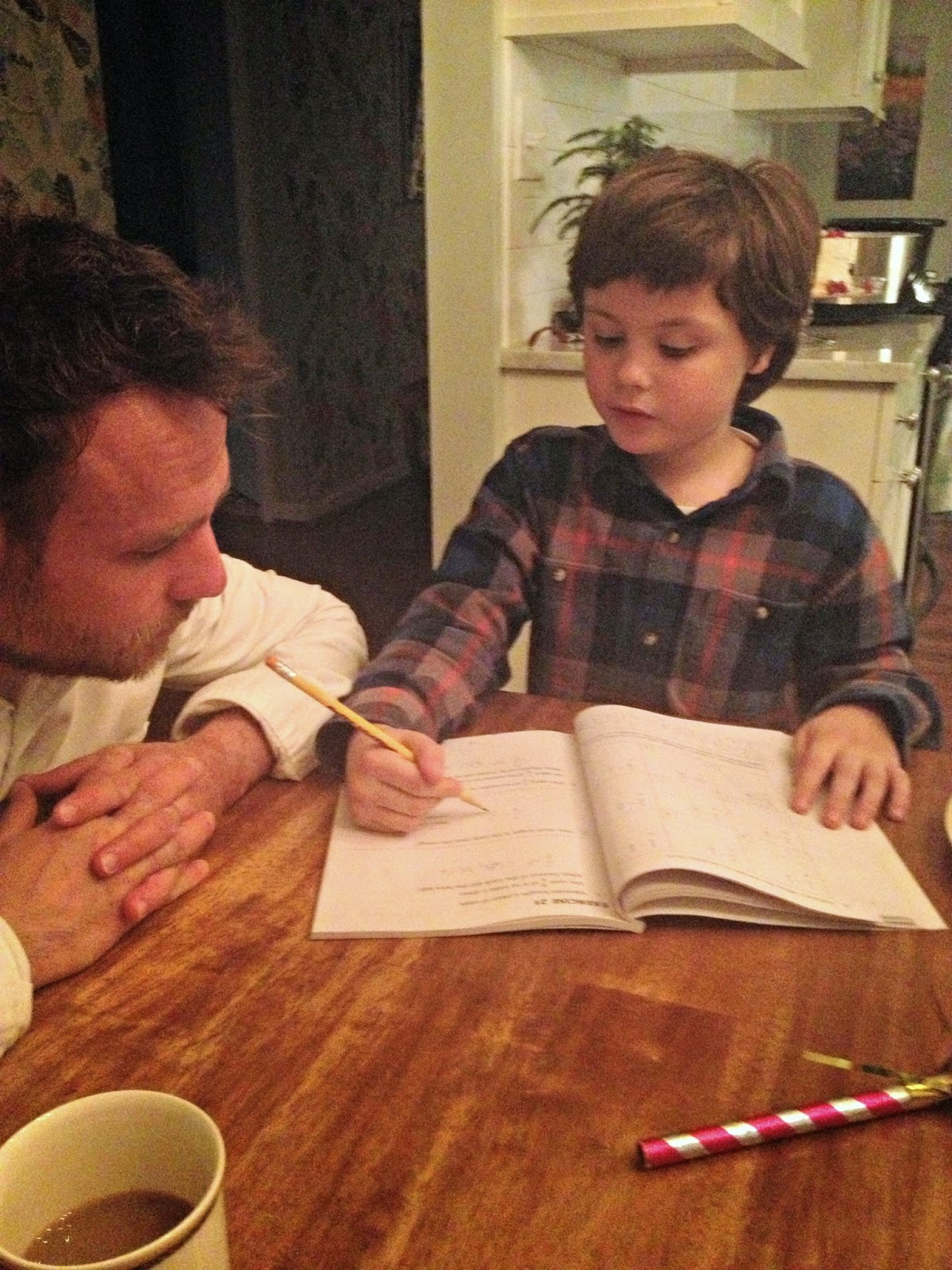 Ah, the BMO scarf makes it's return! I'm thankful that I have a kid who is still willing to wear my handy-craft. This is a picture of the TODDLER hat that he found this weekend and declared it to be an "awesome beanie hat!" It was a prototype that I made ten years ago or more, for a craft fair. Those are puffball snowmen with goggly eyes and sparkly snowflakes on it. 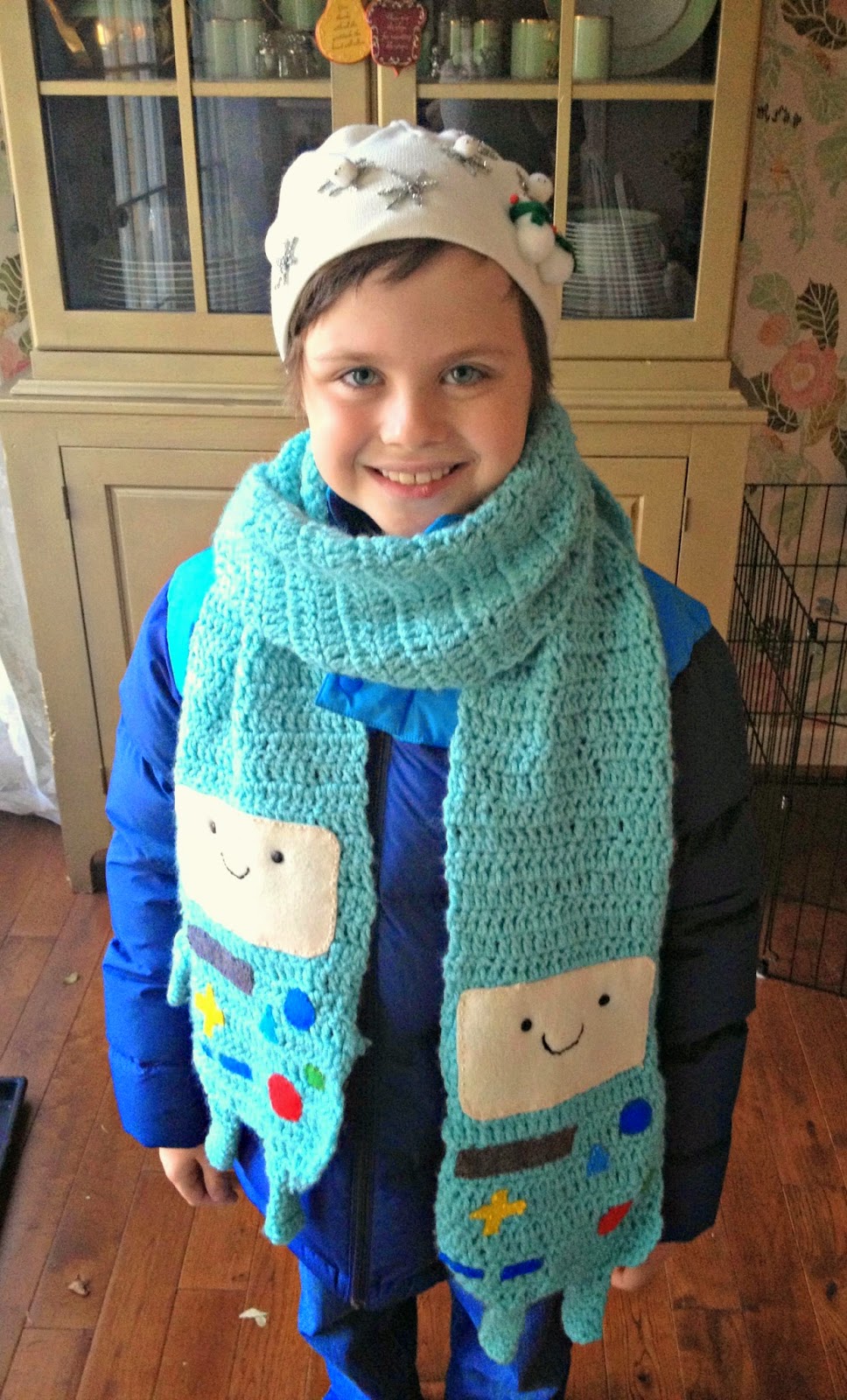 I am happy that for two more years, I get to experience the "school birthday treat." This year it was Rice Krispie treats with sprinkles on top! He looks proud. :) 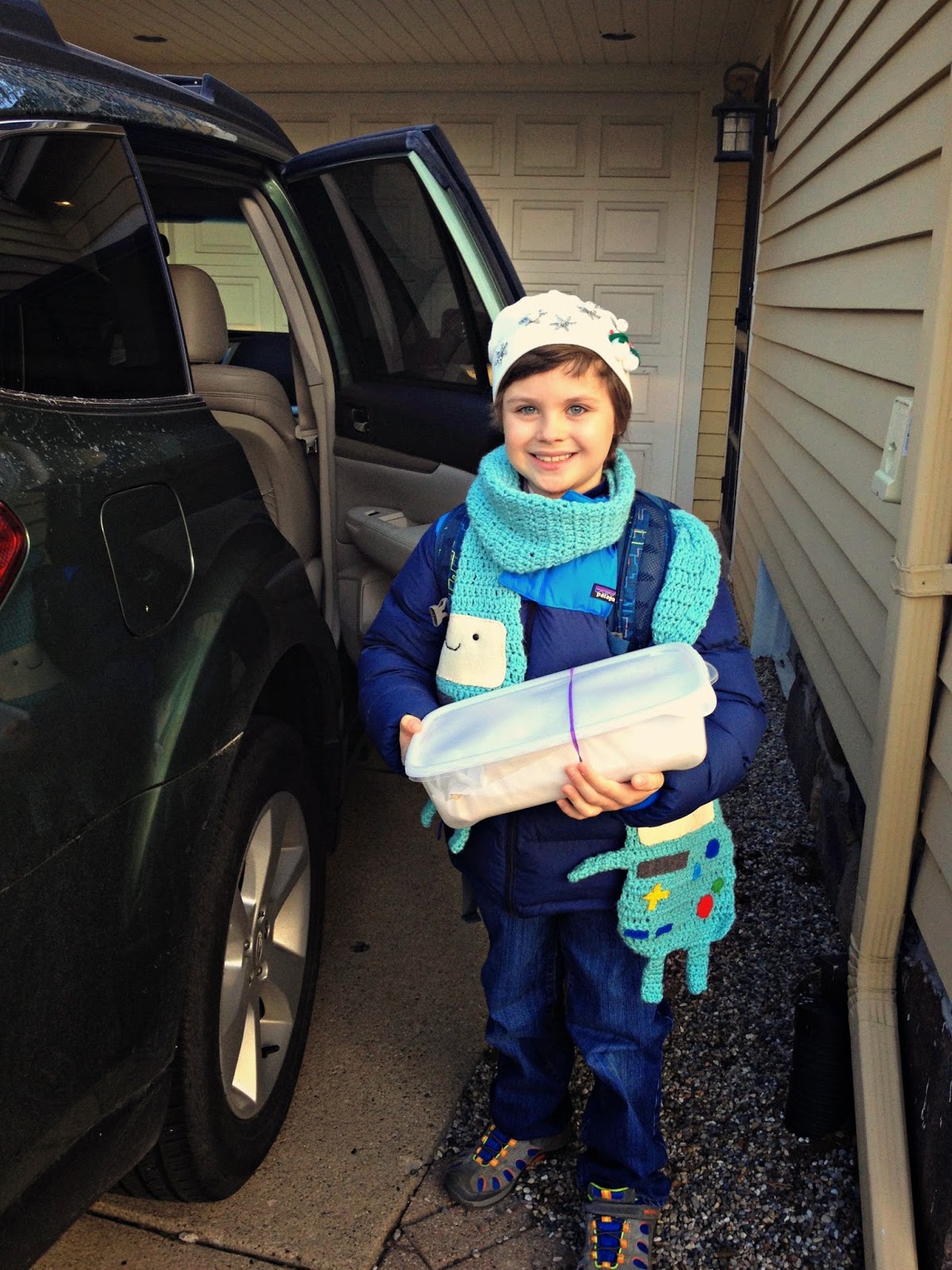 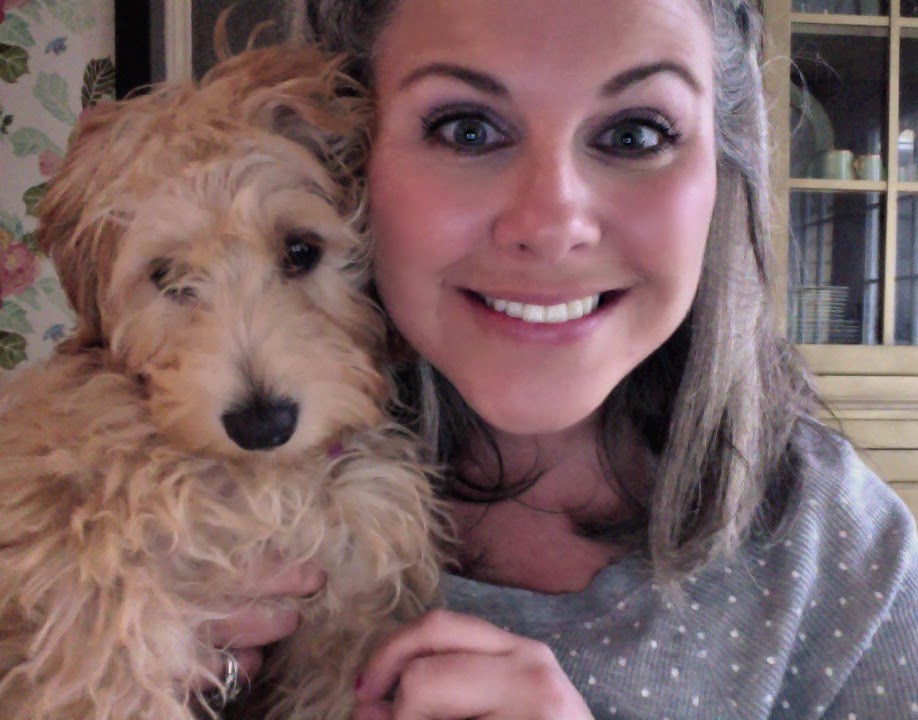 What a cute dog. I love her coat. And while we're on the subject of cute, your boy looks and sounds like a very precious person. He's such a great age. I love the shot of him and his grandparents at the restaurant.

And I am so glad you'll still have your birds, because I so enjoy seeing them. If bird watching is nerdy, then let's be nerdy togethers! xo

Glad things are going so well, Lauren! I know you've been sorta stressed lately. I'm hoping and praying you get some you time soon-time to refresh and all that amazingness. Keep us updated on all the holiday happenings!

Ashlie, you're the sweetest! Thanks so much! Your caring means a lot. Luckily things are working themselves out, life is a tad slower than this crazy fall. I hope you're doing great too. <3

Ok, I'll keep you guys posted on the holidays. I think Josie needs her own stocking for Christmas. Do you have a kitty stocking? See ya around Instagram!

Dear Lauren,
I'm just catching up with my blog visiting this evening. What a precious puppy and that first picture is so sweet! =) As always your post made me smile. Happy Birthday to your sweet Noah! I love the scarf by the way, so cute! I love watching the birds too, it's a colorful way to spend the cold months. ;)
Blessings and Sunshine,
Valerie

Thank you!!!
You are so kind and always have the most supportive, warm comments. I appreciate them very much!

I hope you're doing well too. An early Happy Thanksgiving!