A Little of this & That. Plus, A Crochet FAIL and Some Great Tasting Frosting to Make Up for It!

This week I've felt a little out of energy and down. It might be because we've had rain and cloudy skys all week long. It's ok though! We can't always feel super energized and upbeat. Can we?

After three busier than usual weeks, I decided to stick near home. It was great. I cooked a lot, did loads of laundry, and even got around to some of the cleaning items on my list that have been waiting  for a while. Like cleaning the window sills on the inside of our upstairs windows. For some reason, the old windows collect a strange mixture of dust and what looks little, tiny wood particles. The wood particles booth perplex and concern me.  But, thankfully, I've never seen any evidence of carpenter ants or other wood-eating bugs. So that's good. I chalk the mystery up to just being awesome, 150+ year old, wooden windows. They're a little leaky and a tiny bit crumbly, but I think, so cool!

Anyway, I've been a tired, but it's been a good week. I think this gloomy, chilly weather is getting to me, BUT, the weather..... IT'S FASCINATING!!!!  Please allow me to quickly tell you about how unprecedented our climate has been over here. This is kind of monumental and impacts so much! I'd like to document what things have been like for posterity's sake, but I doubt we Michiganders will forget it anytime soon!

As most of you know, and as many of you have experienced yourselves, quite a few areas of North America had a record breaking winter for frigid, sub-zero temperatures and snowfall. In fact, here in Detroit, we broke the record for snowiest winter EVER recorded in Detroit HISTORY!  It just snowed for MONTHS, and the number of days of super sub-zero temperatures, oh my gosh, it was crazy! We spent so much time indoors, sheltering from the weather. (It was actually fun.) Our school had six snow days called due to snow and dangerous temps. That's pretty unheard of around here.

The winter lasted forever. We had snow just two weeks ago in mid-April! Then I noticed something strange...... Was just in my head? I started to feel like this spring has been really COLD! Was I remembering spring incorrectly from years past? Aren't we supposed to have warmer weather  by now? Did it used to snow into April?  I felt like maybe I was just being a baby and carrying over my cold feelings from the past winter. But then, my friend posted THIS article!

It turns out that I wasn't crazy after all! PHEW!
It turns out that this past March, Michigan had the coldest temperatures which deviated the farthest from their norm...... in the entire WORLD! Wow, just looking at this makes me feel cold! 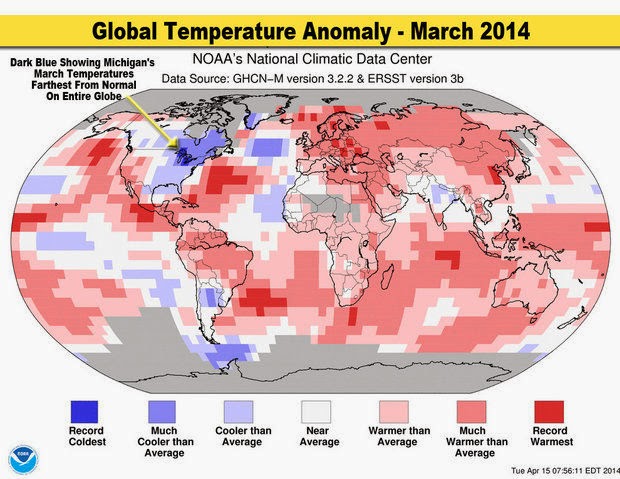 I was really glad to know that I wasn't just imagining it. And if I had to guess, April had similar results. This got me wondering...... if our winter and spring have been uncharacteristically and/or record breakingly cold, will the summer be too!?

Now, here is something that I think many people might not realize, although Michigan is in the northern part of the United States, we actually have quite hot and humid summers! We have a huge variation in our seasons and weather. For example, it is not uncommon in the summer here, to be 90+ degrees and very humid. A couple of summers ago, I remember times when we reached 100 or more, which was NOT FUN.  For me, I love seasons and I love weather! But, the one thing that I do struggle with a little is high heat and humidity. So, the thought of a cooler summer wouldn't be so terrible.
And then, just as I typed the above paragraph and went to retrieve a link, I find THIS article!!! It's like the universe heard my question about this coming summer!

"The Winter of 2013-14 demands that it be remembered.
A relatively cool spring will give way to a colder-than-usual summer locally, all because of the continuing impacts of the intensely frigid, snowy winter, scientists said. And at least one Great Lakes ice researcher thinks that the domino effect could continue into a chilly fall and an early start to next winter — and beyond."

Hmmmm.........what's going on with our climate!? There seems to be a lot of talk about how the percentage of the Great Lakes that was covered by ice this winter, and still continues to be covered, is higher than it's been in 35 years. And how this is disrupting eco systems and shipping. I'd also guess that the lingering ice is helping to cool air temperatures and wind? Or many that's just silly. All I know is that our seasons have gone wild!

Here is a photo that I took of Jon and Hetcor this week. Hector really loves Jon. 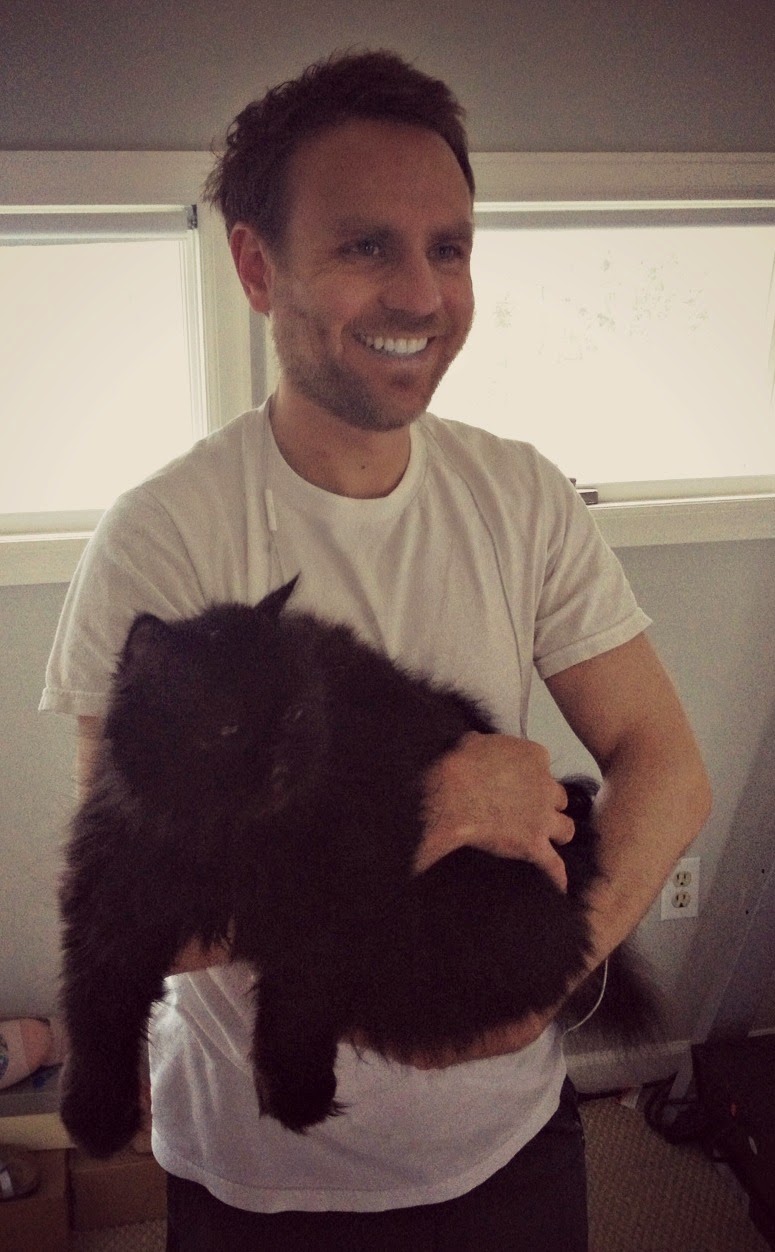 It's been ages since I last crocheted, and I felt inspired to start back up again! I wanted to find a quick project that I could make, something that used up some of my leftover yarn. I crochet like I read and watch movies. Meaning, I really only enjoy non-fiction because you it's real and you learn something. It feels useful to me and I have a difficult time finding fiction "useful" other than transporting you off somewhere. Which, I guess is fine, but I strongly prefer non-fiction. Also, I feel the same way with movies. I only like to watch documentaries. I know this sounds rigid, but it's difficult for me to slow down for a book or movie or project unless it's both enjoyable AND useful.

So, with crochet, I only feel interested in things that are the same, useful! Like potholders and decorations for holidays and things to keep you warm, and cat toys.

I found this cute cat toy and adorable cat on Pinterest! The photo linked to THIS project by the very creative Jamey over at Dabbles & Babbles!  A good idea, right!? This quick project uses up old scraps of yarn and recycles your toilet paper rolls. I got right to work making one up for Hector and Willow. I didn't have a jingle bell to tie onto the end of the curlicue, so instead, to make it more attractive to the cats, I sprayed some of my catnip spray on it!

Here's how mine turned out:  Whaaa - whaaa- whaaaaaaaaaa......  Nowhere near as nice and pretty as Jamey's. I seem to have the Pinterest FAIL curse. My attempts never look as gorgeous as the originals. But, at least I tried! 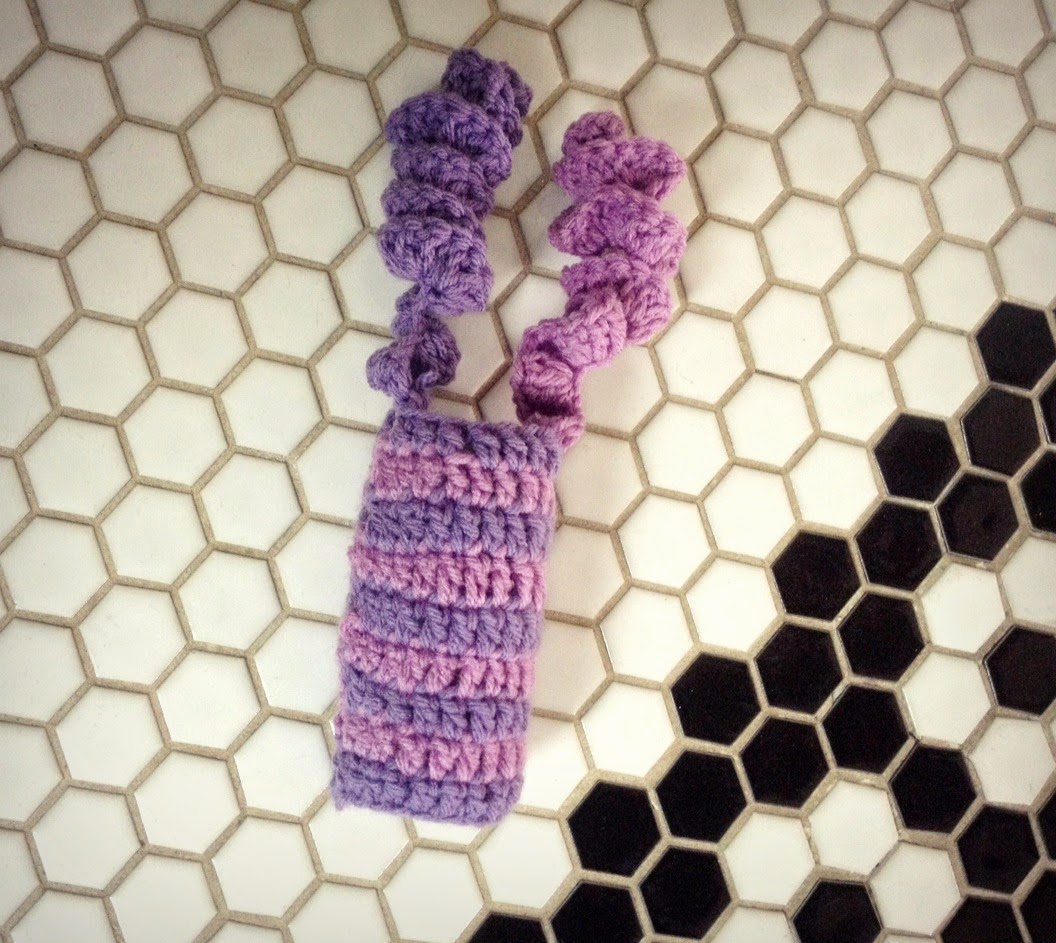 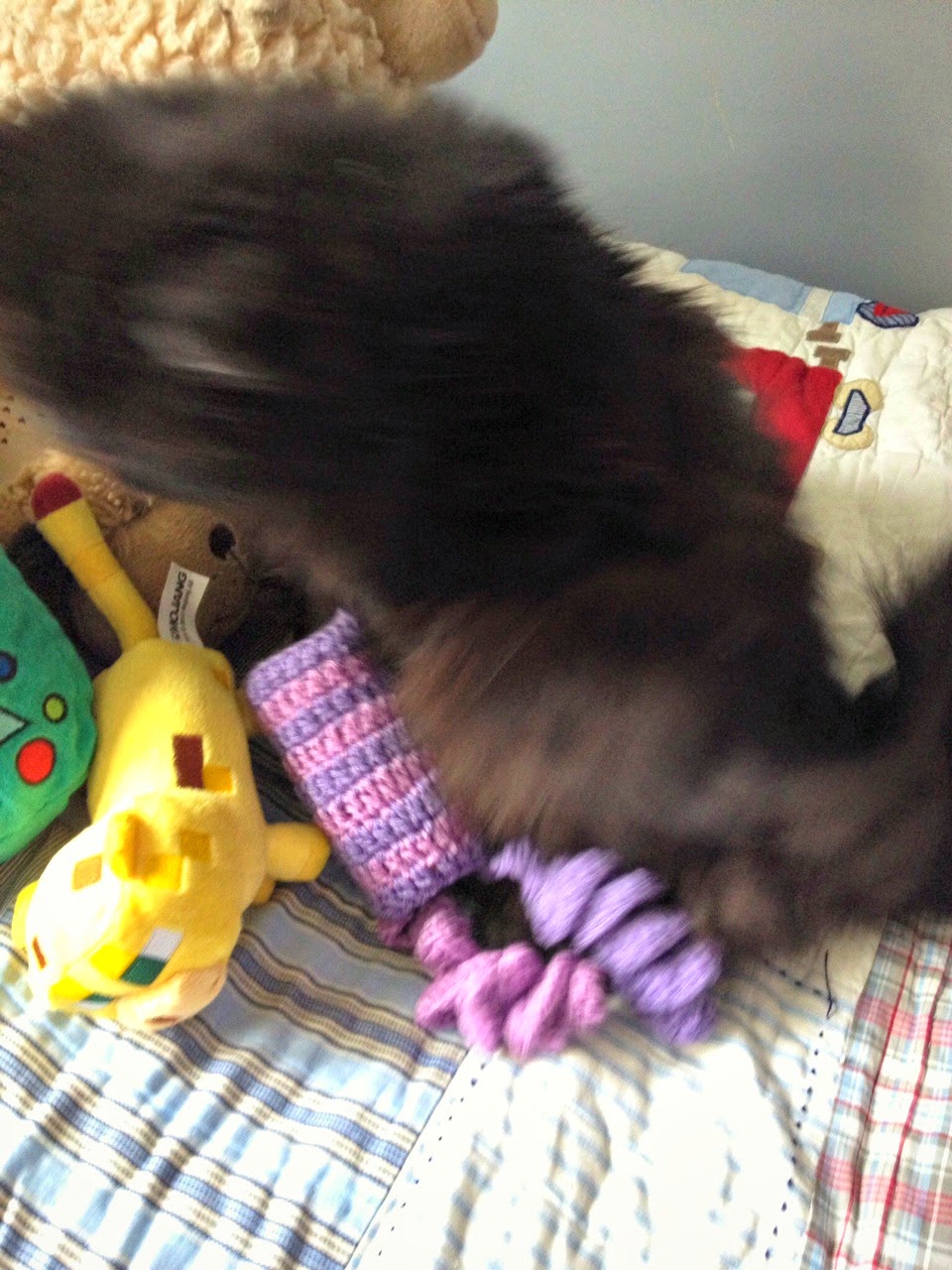 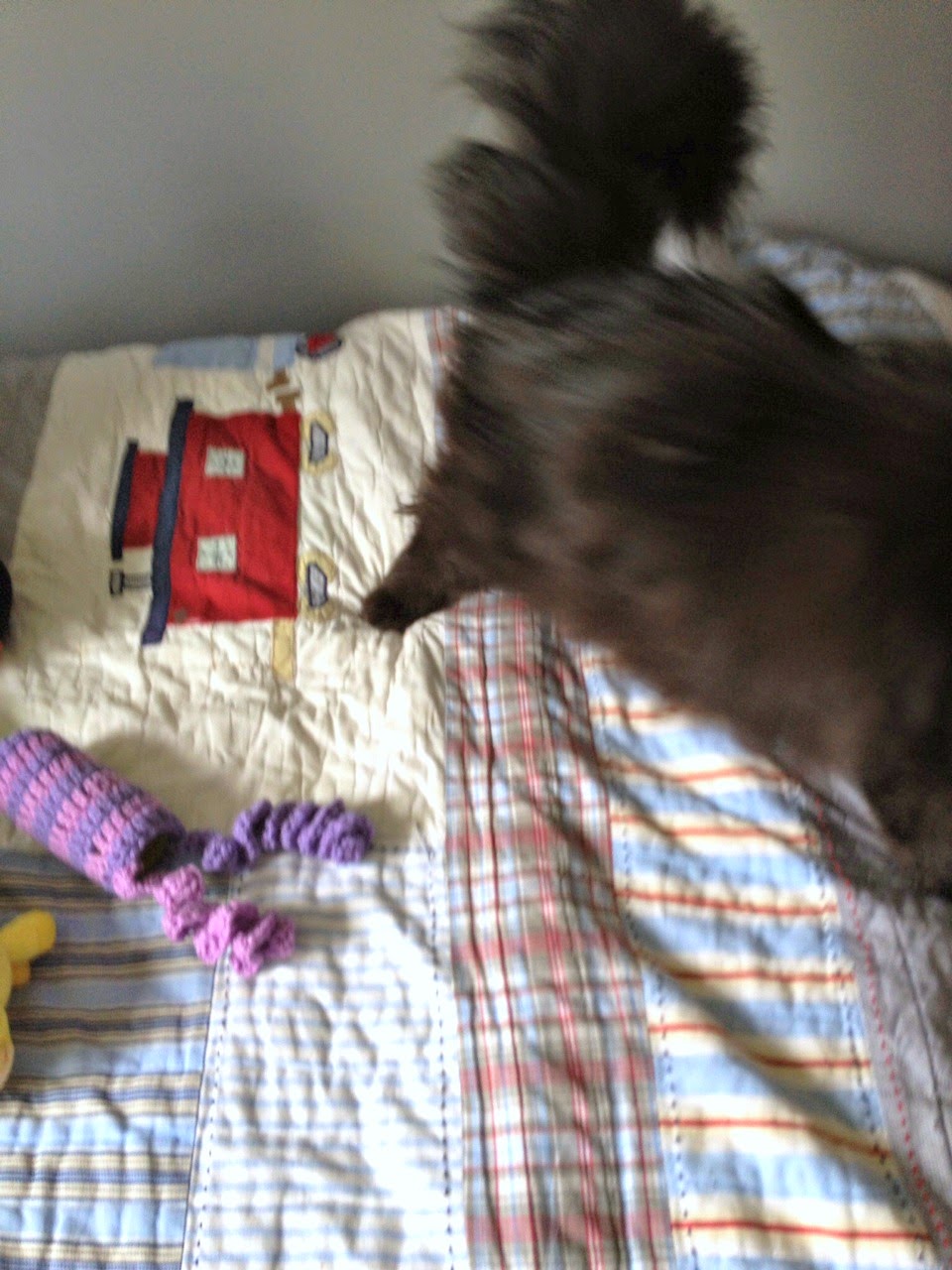 And here's Willow's reaction to the new toy. She was actually OFFENDED that I made her a toy!!!!! 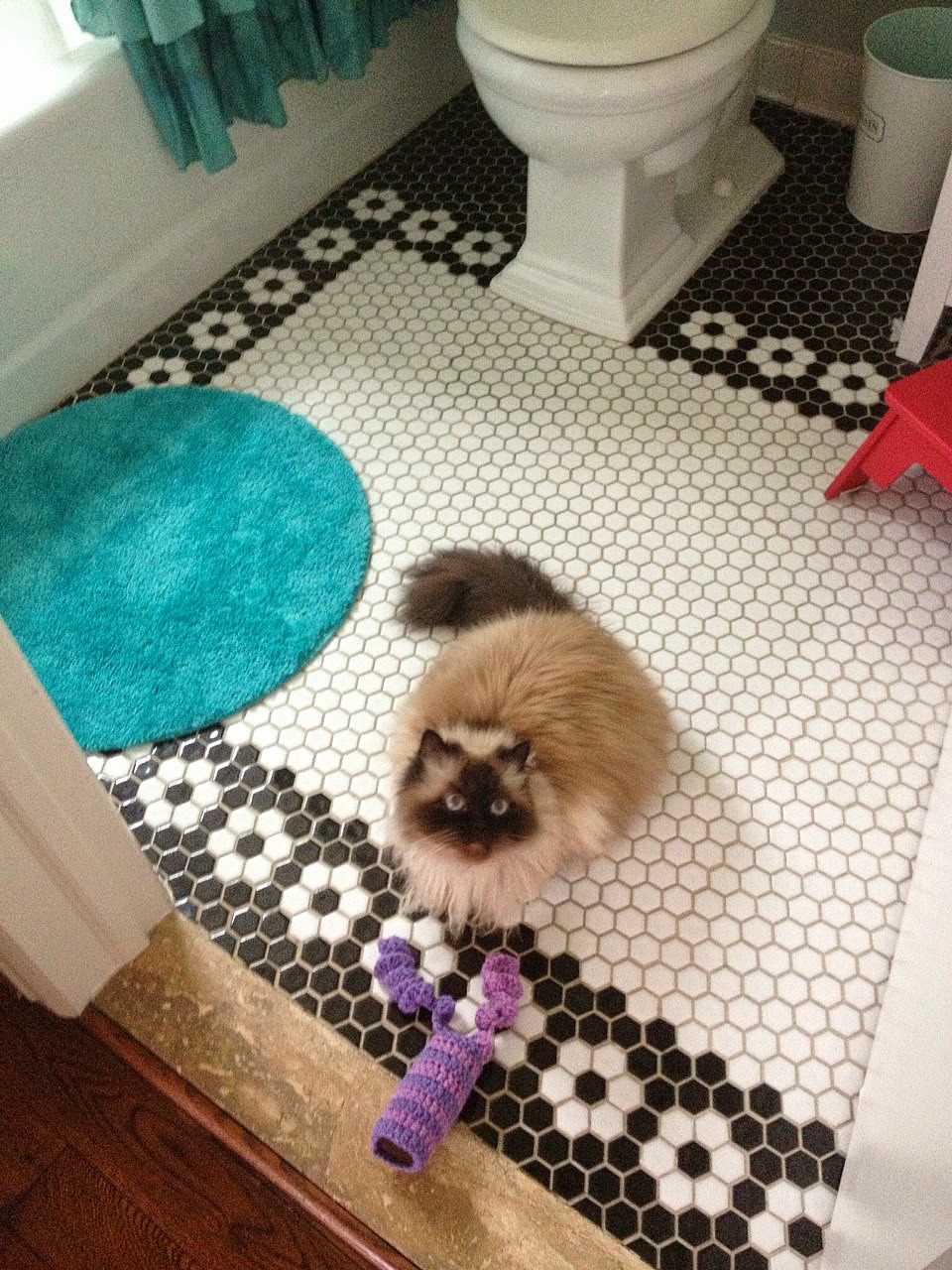 After that fail, I decided that it would be best not to ponder what happened, and instead to move on. I looked all over Pinterest for a project that would really come in handy. Something that I could use. That's when I found this picture and PROJECT from a very cute site called "Meet. Make. Laugh."  I love the premise of the website. It was started by three friends who tired of going out to loud bars to spend time together. Instead, they began to plan nice girls nights where they would meet, create things and enjoy each other's company. Their blog documents some of the events. Great idea!

I really like this laptop cozy that one of the girls named Haley created! And as luck would have it, I've been looking for a laptop case for a long time! Just something to put my computer in when I take it to the coffee shop to write.  This will be great. 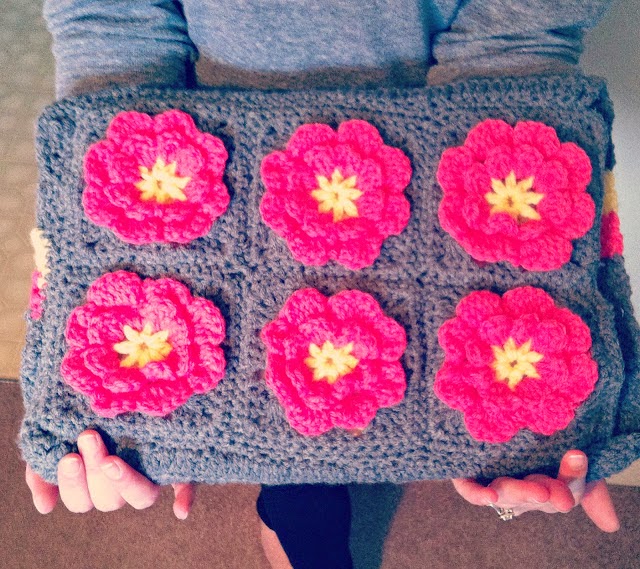 I decided to go with a slightly retro, pastel color scheme. Similar to this photo. (It was an Etsy listing for a vintage blanket that has since sold.) 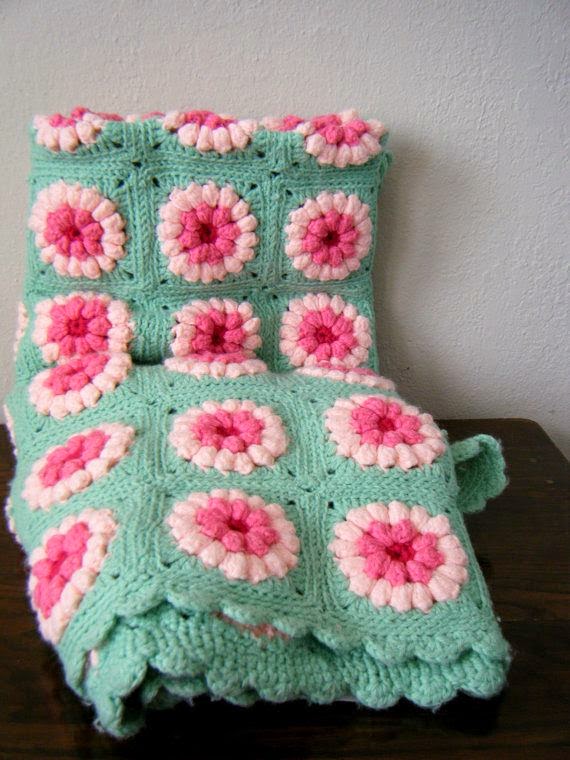 The store that I was at didn't have the same minty green for a background color,  but they did have this robin's egg blue, so I went with it. 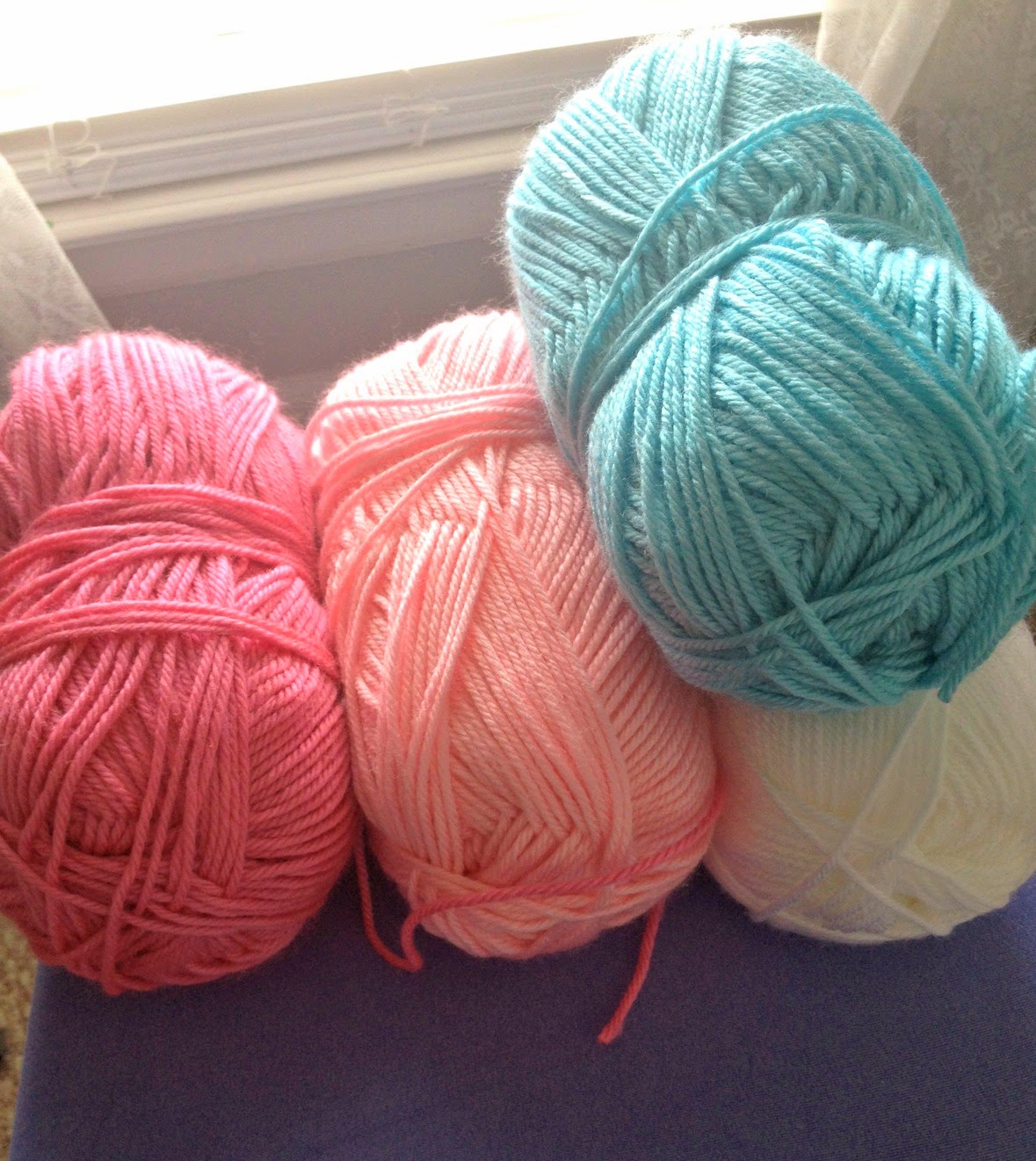 Here are the first two squares that I've made. The one on the left is a bit lopsided. DOH! My plan is to  alternate the colors and also have some squares with dark pink and light pink backgrounds. I hope it comes out ok. Each square takes about a 1/2 hour or so. Not too bad! I'll let you know how everything turns out. 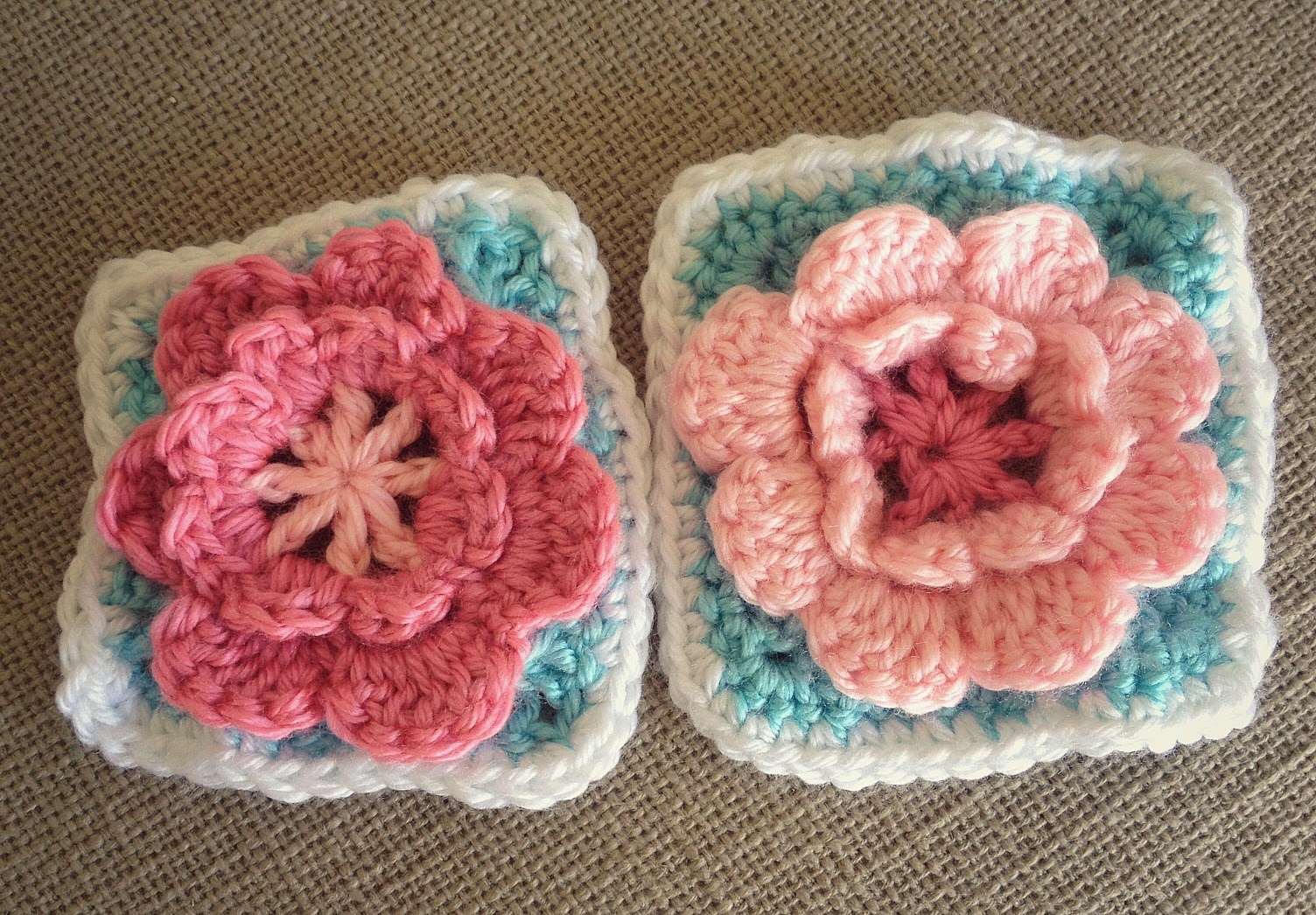 This is Noah when I picked him up at school the other day. He's is wearing the new "sea turtle" shirt that he chose. I'm sad that one day soon he might be too grown up and and feel it is not cool enough to wear sea turtles. And fedoras. 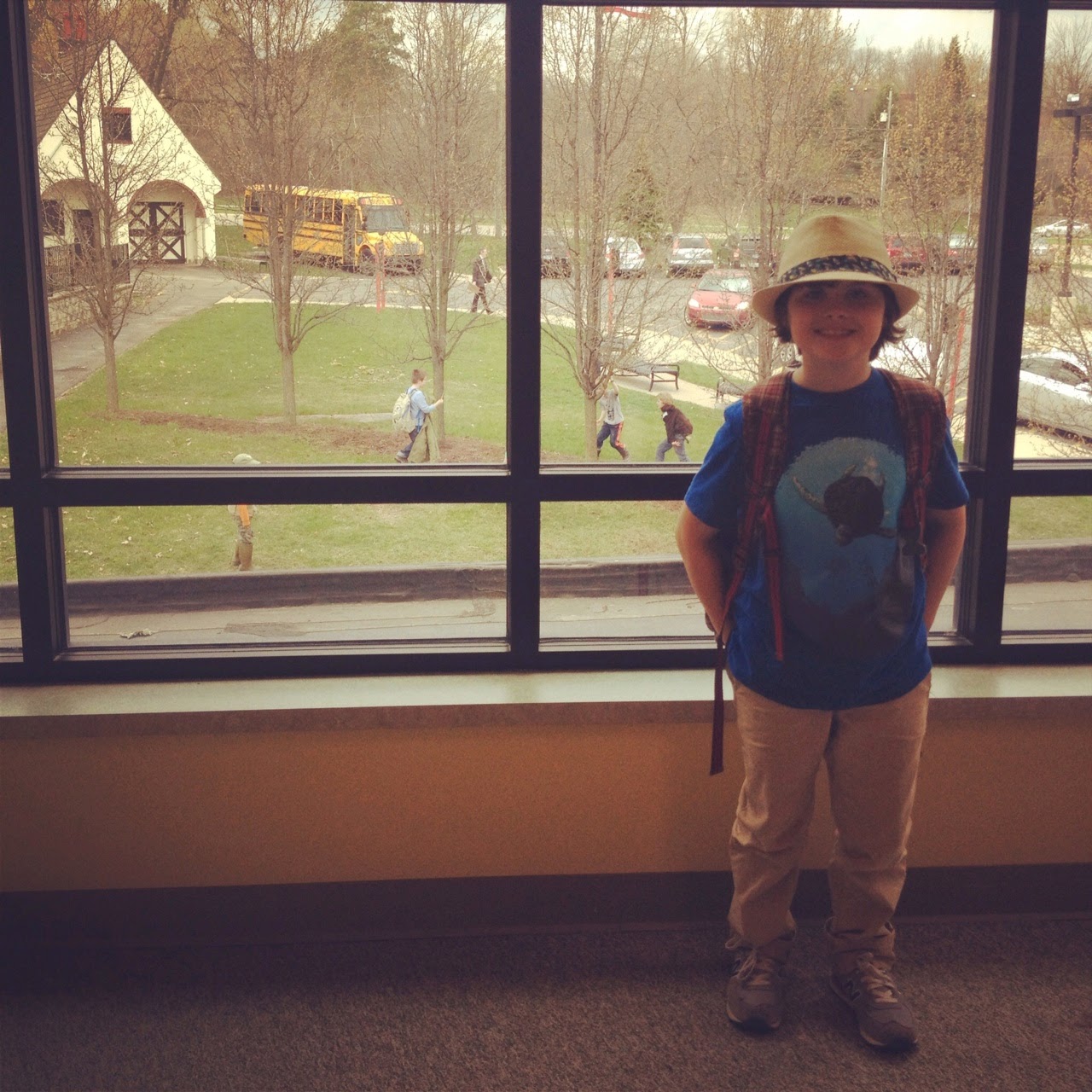 Once when Noah was four years old, he went to a little friend's birthday party. It was at one of those bounce houses places. He jumped in moonwalks and jumped on blow-up obstacle courses and  jumped some more. Then he ate cake and started jumping again, and proceeded to feel very sick to his stomach.  "Allergic!" He thought. "I am allergic to frosting" Noah proclaimed! And then every time following, for the past five years, whenever anybody would offer him ANYTHING with frosting on it he's day the same thing.

This is ok, not a huge deal, but the truth is, Noah isn't allergic to frosting. And finally after years of him telling friends and parents of friends, at every birthday party: "No thank you, I am allergic to frosting", I just kind of wanted Noah to understand that it wasn't an allergy, just the combination of eating than jumping that made him feel so sick that day.

So last spring I made him a homemade Old - Fashioned Pink Strawberry Cake, which you can read about on the blog Here! I thought the cream cheese based frosting with it's fresh strawberry puree', would be a little less sweet than most frosting. And then I convinced Noah to try it, and he did! And not only that, but he LOVED the cake and frosting, and not only that, but he didn't get sick at all!

STILL, even after all of that, he continues to refuse to eat any frosting. BUT.... I did decide, once again in honor of spring, to make my cake and frosting this week for Noah, just in case. This time around I made cupcakes though, and topped them with strawberries. Yum! 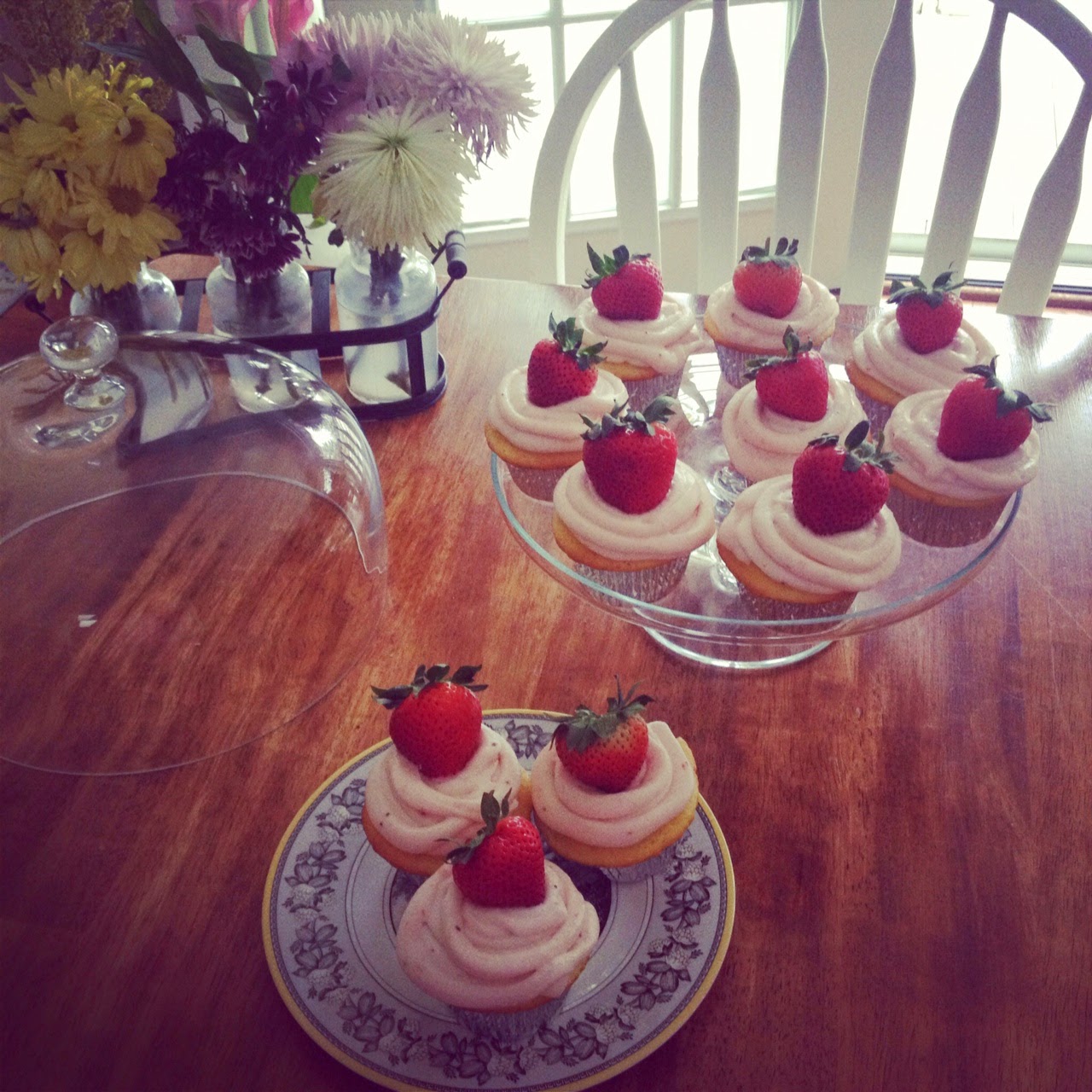 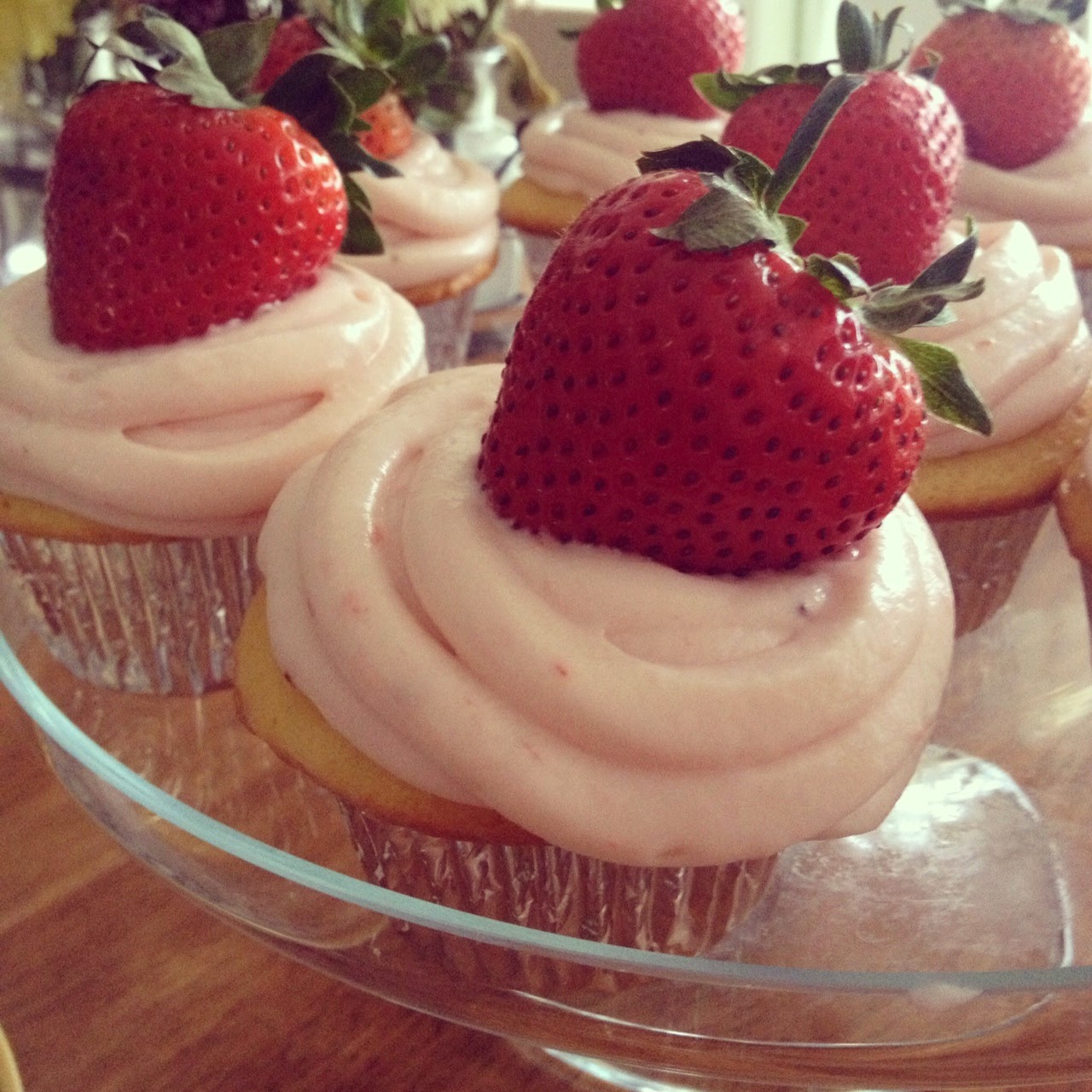 And guess what? He ate one! :)
We even had extra frosting left over, so I pipped it into our mouths It was THAT GOOD!
I just wanted to share the recipe with you again, so there it is!

Hi Lauren,
That laptop cozy is gorgeous! I love the colors you picked out for yours. I thought your kitty toy was pretty cute myself. ;) Love Noah's hat. My nine year old loves hats, but he doesn't have one quite that snazzy! I think I gained a few pounds just looking at those yummy cupcakes. YUM! Hope you are having a great week! Hugs, Valerie

Thank you so much Valerie! Hugs to you too! I hope you are having a nice week also! (>'-')>
P.S. The hat is from Target. Maybe your son needs one too! :)
xoxoxoxo