What if I told you that you could get your daily exercise in, in just SEVEN minutes, AND have a lot of fun doing it!? That it would take only a few minutes to feel accomplished and good about yourself, wold you think it too good to be true?
How Bourgeois friends, allow me to please introduce you to one of my new favorites - The 7 Minute Work!!!

Last spring, when the New York Times published an article  in their wellness section on the promising new scientific findings of HIIT (High-Intensity Interval Training), the 7 Minute Workout craze began. Fitness professionals debated the effectiveness of such a short exercise routine, and researches retorted with their studies and claims that high-intensity circuit training, which includes aerobic and weight bearing exercises, can have as much benefit as a longer, less intense workouts.

The American College of Sports Medicine's Fitness & Health Journal, published an article in the May-June issue, discussing their findings that: high-intensity, exercising at your peak level, circuit training, in conjunction with weight bearing exercises, can give you maximum results with less time investment. Researchers found that when we work very hard, in short burst, molecular changes begin to occur in our muscles, changes that are not seen in other, longer endurance exercises like bike riding. Also, a recent studied that was published in the European Journal of Applied Physiology claims that HIIT training helps us to release more of the fat burning hormone immediately after exercising, as compared with more traditional routines. There are other findings too, that circuit training raises our metabolism and keeps it chugging along for up to 72 hours post-training. That's pretty cool if true! You can read more about all of these things in THIS article from Prevention.com.

I think though, what proves something like the 7 Minute Workout to be worth at least a try, is it's staggering popularity and consistently positive reviews from those who test it out! For example, search "7 Minute Workout" in the iTunes Store and you'll find an enormous amount of 7 Minute workout apps available. I stopped counting at 50! More than that though, the ratings and reviews are very positive. My favorite 7 Minute app is the FREE 7 Minute Workout by Uovo.  I'm going to talk to you about it in a minute, but this app has almost 50 five-star reviews. Not only do reviewers find this circuit  to be simple and easy to do, there are many testimonies from people who say that this workout has helped to reshape their bodies and give them a greater level of fitness.

Here's why I like it though, as a person who could never stick with a consistent exercise routine before, and has finally found the key to changing that, (I'm about to go into month 10 of almost daily exercise!) I see the 7 Minute Workout as a tool to this consistency! Let me explain, if you'd like to exercise more often, it might be helpful to you too!

Like a lot of people, I wanted to exercise more, but I always felt too busy to really find enough time. And when I would jump into an exercise routine, I'd go all out, doing what I THOUGHT I had to do, like long exercise classes or hours to and from a gym for water aerobics. It wasn't fun, I felt stressed time-wise, and so eventually I'd give up! Then I read the book Intuitive Eating by Evelyn Tribole, which is one of the most important books that I've read in a long time, (but that's another post). There is a chapter in Intuitive Eating that talks about exercise, and how most people will not stick with an exercise routine, unless it's something that you actually enjoy! Your workout can be intense, but you should also look forward to whatever type of workout that you choose. Tribole's premise is that exercise should not solely be about weight loss, that it should be about being healthy and fit first! That exercise should be about moving our bodies and being nice to them, not about torturing ourselves at the gym. (If that feels like torture to you.) She instructs that if you can find an exercise that you like enough, and can tailor the right duration to your time needs, then you will stick with it! And guess what? SHE WAS SO RIGHT!!!!

Walking has always been one of my favorite things, but my exercise walks were far between. This is because I thought, for some reason, that I had to walk a good 30-60 minutes+ to get any health benefits from walking. I had to go far! Last August, I decided to challenge myself to take up walking, on a constant basis. Both inside on the treadmill and outside. Here's the catch, I had to figure out what my threshold was, what was the longest amount of time I could walk everyday, without feeling like it was stressing me out time-wise, so that I could actually look forward to my daily walk, not like it was a chore.

I had recently read about a Mom who walked each day on the treadmill for 20 minutes, so I decided to start there. It was great! Soon I was sometimes even going for 25 or 30 minutes, walking at a faster and faster pace, and slowly raising the incline. Until one day, I couldn't raise the incline anymore! I was having fun, and I still do. I was motivated to use my neighborhood hills and valleys and outdoor features like stairs build into a hillside, to create cross-training courses. For the first time in my life, I actually LOOK FORWARD to exercise and enjoyed challenging myself! And this was all because I gave myself "permission" to not worry about what other people did to train, and instead addressed my own needs!

The other night it was quite cold out, and I knew that rain was coming. I realized that I probably should stay inside and use the treadmill, but I wasn't feeling very inspired. I wanted to change things up a bit. I've tried free exercise videos online, but often times, when you're bouncing around the room, it's difficult to follow along with the tiny instructor on the screen. But then I heard about the 7 Minute Workout App from Uovo!  My new favorite fitness app!!! It's THE BEST! And FREE!

All this little app is, is a pleasant British sounding woman who simply instructs you on what exercise to do in the sequence. (See the graphic below!) Starting with jumping jacks, you do each exercise for 30 second, take a 10 second rest, and then move on to the next exercise. The narrator times everything for you. It's simple and clear and as long as you know the exercise names, you never have to look at the screen. 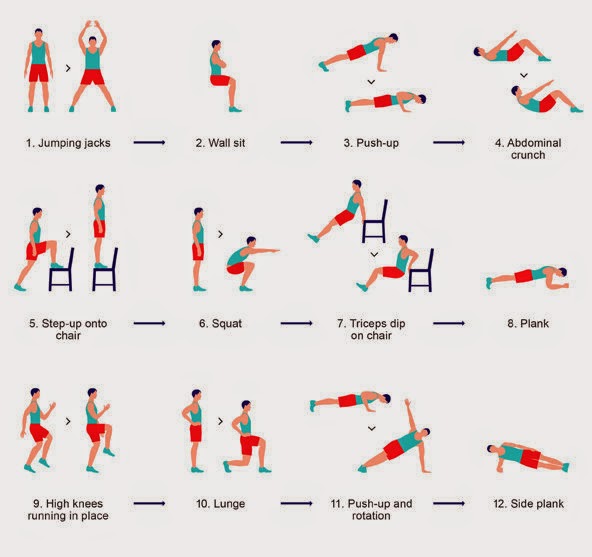 I was skeptical myself at first. How could you really get a workout in seven minutes? But embarrassingly, I was breathing hard after just a few exercises. I have a feeling that you get out of it, what you put into it. For example, during the cardio exercises like jumping jacks and running in place, I tried to really go for it! No slacking, it's just seven minutes. The circuit wasn't easy, but it was FUN! In fact, amazingly, after my seven minutes were up, I wanted to go through it again, which you can!

Another reason that I was open to trying this short routine, was because I remembered seeing a documentary program from the BBC called "Horizons." In this episode, entitled "The Truth About Exercise",  Dr. Michael Mosley investigated the recent scientific finding that short-length, high-intensity training (HIIT) can improve your medical markers and fitness more, as I mentioned before, than things like long distance running. Here is a preview, but I have to say that the documentary was really interesting, and in the end, Dr. Mosley had some health improvements after trying the training for a while. Apparently, genetics play a part as to how much we respond to this kind of exercise, but you never know until you try it for yourself!

ANYWAY..... I just wanted to share this app recommendation with you because rarely do I find something both FREE and FUN and GOOD FOR YOU TOO! :)
Oh! And , yes, yes, I  still plan to keep walking and maybe tack on the 7 Minute Workout to the ends of my walks, or to use it on days when I am too busy to take a full walk. My instinct is saying that the 7 Minute Workout is kind of the minimum time you can spend exercising for fitness, but I firmly believe that some exercise is so much better than none.

If you decide to give it a go, let me know! I'll keep you posted too as to if I find myself getting fitter from using this app.

Thanks for the recommendation, Lauren! Downloading the app today.

Oh good! I hope you like it too! It was such a nice, little app, I just felt like passing the word along. Thanks for your comment! :)
xoxoxox

7 minutes! Now that is a workout even I can handle. =)

Ha! I'm right there with you Valerie! :)
Although, tonight I did the 7, then walked on the treadmill while watch a movie, and lost track of time. It was kind of unbelievable. Usually I watch the clock! :)
xoxoxo