Meeting Him Where He's At - Connecting With The Minecraft Minute

Anyone who knows me, knows that I am a podcast addict! Podcasts are my favorite form of media entertainment. Not television, not movies, not even radio. With podcasts, you can choose to listen to radio and online programing on your own schedule. It's wonderful! And, I love that fact that you can find content for just about anything. It's like the internet for your ears!

One of my favorite podcasts is from The Parent's Journal. The Parent's Journal began in 1986 by host Bobbie Carter. It was started as a weekly, national radio program that featured interviews from leading pediatricians and child development and parenting experts.  Now the The Parent's Journal is online only, but it's easier than ever to listen to. You can simply download each show HERE, or find them on iTunes.

I was listening to an episode recently, and I was surprised to suddenly feel a deep clarity and sadness about two things. One was the real comprehension that kids grow up so fast - they really do, it's not just a cliche' that everyone says. They were talking about the 0-3 years on the podcast, and how crucial these years are for social/emotional development and more. I was thinking back to a time when Noah was that young, and could hardly believe that we're now past that phase two times over!

The second sad and profound thought that came form listening that day was that 9 years ago, when Noah was a baby, I was SO MUCH less equipped to relax and enjoy and take in his babyhood than I am today. With nine years as a parent under my belt, I know and understand much much more about mindfulness, and the gravity of being a mother, and the fleetingness of the early times.

Granted, like most new parents, I was sleep deprived, physically and mentally exhausted, and was new to the whole baby game. I was also only twenty-seven, and for what it's worth at thirty-six I feel like a totally different person. I didn't realize then what I know now: that he REALLY is only young for a teeny tiny amount of time; that the sleepless nights really wouldn't last forever.

I wasn't in the state of mind to stop and realize that each return smile that I gave to Noah could light up neurons and help make connections. I hadn't grasped that all of the worrying and fretting about and feeling that these hard hard days and nights would never end.....would actually one day slowly fade  into easier times.

I can confidently say that during the early years, I gave it my best shot. I did. That's all you can do. The baby yoga and the baby music class and the story time at the library and the play gym and the Mom and Tot program and the long walks and the zoo and songs and the hugs and the everything. You just jump in and aim for your best.

When Noah was a little older, I became a little wiser, and I tried to stop and take in the moment. Anything to make a memory. He was never a snuggly baby or young child, so I felt even more of an urgency to find ways to connect. Unfortunately, past a certain point,  there are only so many times you can will an uninterested child into crafting or baking or taking nature walks or singing songs about butterflies. Once Noah hit "the big-time" in school (apparently to him that was 4-year-old preschool), he had little desire to Mommy & Me it up. There were kids to see, an amazing, new object called a "computer" with things called "games" to pine after, and the latest Thomas the Tank Engine episode to watch.  (By the way, my one, biggest regrets as a parent to a young child...... SCREENS.  I wish, I WISH back then, that I would have realized how something as innocent and sweet as "Club Penguin" could have the potential to snowball into a screen obsession.

Yes, I am the parent, and yes it is my job to set and uphold parameters as to what is appropriate screen time, but now I see if I had not let Noah get into them so early, he might be less into screens today. He might have been more willing to go outside and play without our urging.

I thought that there has to be SOME way to connect with Noah, something that we could easily do each day together, if only for a few minutes. Something that was just ours.

That's when I came up with "MINI-CONS!"  Which means  MINI + CONVERSATIONS to sound cool, because if you are a nine-year-old boy, you are obsessed with MINIFIGS..... you know, Lego Mini Figures. DUH! 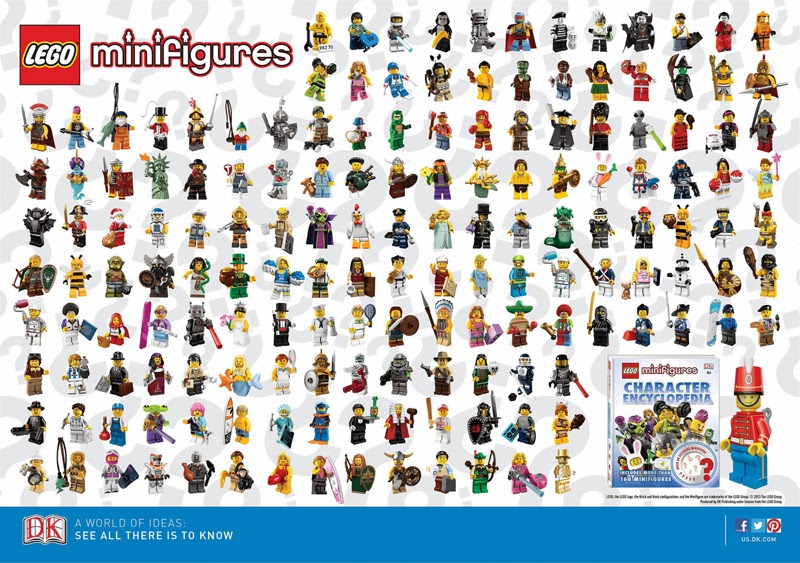 So I said to Noah one evening: "Hey, remember that time last week you came to me and we had a really nice conversation about blah-blah-blah?  Well, I like that and thought it was great that we can talk, so I've invented something REALLY neat and REALLY cool called: MINICONS!!!!"

To say that Noah was thrilled about this super AWESOME new thing that I invented would be an over-statement. Actually, to say he was thrilled would be a giant lie. But, he is a good sport, and good sports usually try something new at least once.  So I said to Noah that each day we'd have a "minicon" with a new topic, and that we'd stop and slow down for just a few minutes to check-in and chat.

And after three minutes of chatting and squirming, Noah asked if he could go. I said "yes," but realized that I needed to re-think my minicon strategy.

The next day I was doing some mindless something or other, like folding laundry, when Noah burst into the room. He started going a million miles-per-hour about Minecraft this and Minecraft that.
He was getting excited for an upcoming playdate, and built his friend a guest house, a cottage, an apartment building, a tent and a hut to choose from to "stay in" when he came over. (Which, I don't even know what that means but....) I also heard about the "nightclub" that Noah built on Minecraft too. You turn your head for one  second and your kid's built a nightclub.

Then it dawned on me, if I ever hope to really connect with my kid on a regular basis......
......... I need to meet Noah where he's at!  Even if I completely and utterly begrudge the thought of yet another Minecraft conversation, it means a lot to Noah and I should just do it. Expecting my nine-year-old to be excited and engaged about topics that I choose makes much less sense than talking about his current, great love - The Craft. 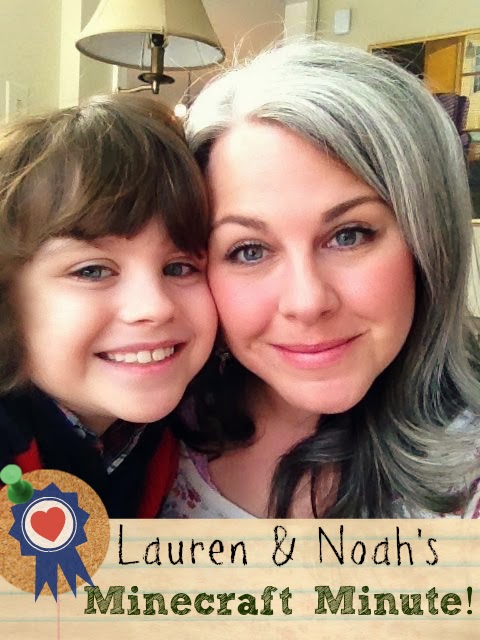 And so, I invented "Lauren & Noah's Minecraft Minute," and  I met him where's he's at, and could not BELIEVE that I was actually asking to hear MORE about Minecraft, but I did.  I did, and now I know about mini-game servers and that Herobrine - the main character of the Minecraft Creepy Pasta story (whaaaat?), A.K.A. according to Noah: "Hero Brian," can also show up in creative mode, but can't  hurt you because you have unlimited health.

I never knew that stuff! Now I am enlightened and I have a son who willingly engages in daily conversations with me.

So that's how I'm learning to slow down the pace and enjoy this stage of Noah's childhood. I know in a blink, he'll be a tween and then a teen and then....off living life as a college kid. It sadly goes so quickly.......

I try to comfort myself by knowing at least for a bit, he's still a little kid. His innocence and cute, kid sayings still make me smile. Like today, while excitedly waiting for his buddy to arrive, Noah asked if he could have a chair so that he could look out the front door's "Peeb Hole." Yes, Noah, yes you can have a chair to look out of the peeb hole.

You're SUCH an amazing Mama! Noah is blessed!

There are days I DREAM of Minicons, because Janan can go on ad nauseum about Manga, Dr. Who, Sherlock and Supernatural, EVERY moment in EVERY class she had (and she's in high school, so that's 6 full periods described in full detail with complete conversations of all students and teachers in addition to her commentary on said conversations...), her current favorite song, who is dating who in boy band world, etc.

It can be BEYOND exhausting at times but, I've learned to love these "verbal barf sessions" (as I used to call them) because I really do learn about her day, what she's thinking, feeling, who she's hanging out with, who is dating whom, etc.

It's a window into my teenager's world many parents never get. And though my "window into her world" can often feel like a gaping chasm, I've learned to simply spread my arms wide and jump right in. ;o)

Trust me. Learning about Minecraft now will lead to learning about more and more as he grows up. Someday, you'll WISH for the Minecraft conversations when you're discussing his first broken heart. <3

You're SUCH an amazing Mama! Noah is blessed!

There are days I DREAM of Minicons, because Janan can go on ad nauseum about Manga, Dr. Who, Sherlock and Supernatural, EVERY moment in EVERY class she had (and she's in high school, so that's 6 full periods described in full detail with complete conversations of all students and teachers in addition to her commentary on said conversations...), her current favorite song, who is dating who in boy band world, etc.

It can be BEYOND exhausting at times but, I've learned to love these "verbal barf sessions" (as I used to call them) because I really do learn about her day, what she's thinking, feeling, who she's hanging out with, who is dating whom, etc.

It's a window into my teenager's world many parents never get. And though my "window into her world" can often feel like a gaping chasm, I've learned to simply spread my arms wide and jump right in. ;o)

Trust me. Learning about Minecraft now will lead to learning about more and more as he grows up. Someday, you'll WISH for the Minecraft conversations when you're discussing his first broken heart. <3

I can so relate! My boys are 5 1/2 and just a few months shy of 10. Thanks to their Gamer dad, they also got into screens much earlier than I would have liked. They are both obsessed with Minecraft. They do talk a lot abt it but my eyes usually glaze over after awhile, haha... It's a good point you make- meet them where they are.
I've just discovered your blog. We have so many things in common, it's great. Same age, each have a 9 yr old boy, and both prematurely gray! I've yet to embrace mine, however. Maybe one day.
What I've read of your blog so far has been great. Two thumbs up! Brandy