T'was the Time Before Christmas

I hope for those of you who celebrate Christmas and the sorts, that you all had a lovely time. Ours was pretty nice. I was just glad to spend time with Jon and Noah. That's what makes this time so special to me, simply for the fact that we're all together! At no other time of the year do we get such a great amount of family time for the three of us. In fact, just the other day Jon mentioned that he receives five weeks of vacation time this year, but had only taken about two. WHAT!? Believe me, now that I know this, I'll be asking him to take some more time in about six months, so we can have some family time again!

One of the things that we did leading up to Christmas was eat a lot of sushi and Japanese food for some reason.

We sorted through thousands of pieces of Lego (it took me an entire day)! We had a wonderful friend over (this is the difference between boys and girls when you ask them to smile for the camera. Erg)! Also, I got about five minutes of crochet in, but hope to find some more time soon!

Something unbelievable happened with this little sparrow a couple of days before Christmas.... I woke up in the morning and found him SLEEPING on the feeder! You need to know that birds never ever sleep on feeders, and I've rarely seen a Sparrow sit at one for more than a couple of minutes. He just sat there, puffed up, looking very asleep! I started to worry that something was really wrong. That he was sick or injured. I became very upset and called to Jon that we need to go outside to check on him. It took us a few minutes to get coats and hats and boots, and in the time, he was still "sleeping."

When we got outside I couldn't believe my eyes, and when I said something to him, it looked like he suddenly woke up! And he didn't become afraid and fly away as would any bird I've ever had at the feeder, he just started eating! He ate and ate and ate no matter how close I got. We were face to face and he still munched on seeds! This went on for about five minutes. I was very relieved to see him hop and then fly from feeder to feeder. We also have a couple suet feeders in this tree and he had to fly to get to them. I took some pictures, marveled at being so close to a bird and then went inside. We watched him for a few more minutes until unceremoniously he flew off as if nothing ever happened. But what did happen!? This was too strange. I know this sounds completely loopy, but I have to wonder if it was Priya stopping by to say "hello." That would be so cool, and hey, stranger things have happened! 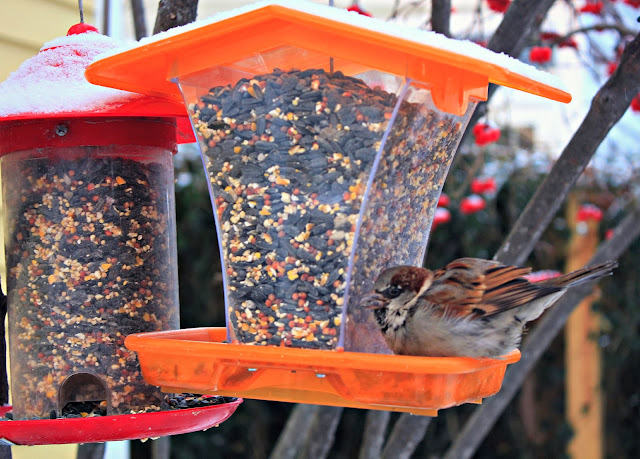 We have had some nice weather and decided to take a walk around town. Do you see "scar coat!?" Jon was outside roasting coffee on his griddle over the grill, when he accidentally got too close and singed his coat! It burned a big hole in the coat and down started coming out. Jon asked me if I could sew it up and fix the coat and I said that I could, but it would look obvious. He picked out a red embroidery floss because it matched some red accents already and the coat and voila! Scar Coat was born. We know it's ridiculous, but who wants to stop wearing a perfectly good coat for a small reason. I  think it makes Jon look tough, like he was in a knife fight or something. Although the red MITTENS of mine that he's wearing for some reason.....not so tough. ;)

I found a birding book on the new materials shelf at the library, and sat by the fire for about five minutes reading. I still need to learn how to relax.

*Before you read further Noah would like me to make it very understood that I have misplaced his red race car apron at the moment and that is why he was forced to borrow one of mine. Otherwise he would not choose to wear a Little House on the Prairie-esq apron.*

I've mentioned before that I wanted to plan some new family traditions for Christmas Eve day and Christmas Eve it's self. We don't have any, and it's always such a quiet, peaceful day that it's a perfect time to make or do something! So I thought cookie baking was in order. We had so much fun making a batch of sugar cookies, baking them and decorating. AND, I have to say, they did turn out pretty delicious. I'm just so sad that we accidentally left all of them at my Mom's house. I would have liked to have eaten one or two or three or four more.....

I've also blogged about the Christmas Eve Box. It ended up being a big hit! I'm so glad that we started this as a tradition. Noah was surprised. He opened his box to find a new pair of pajamas, some Christmas cartoon DVD's, pop corn kernels, hot chocolate and candy.

And then Jon and Noah surprised ME with new pajamas (I was really surprised)! I know this might seem completely and utterly dorky, but I've wanted this flannel Lanz of Salzberg nightgown for a while. It has Cardinals on it! Lol. I'm such a dork, but I LOVE it!!!! 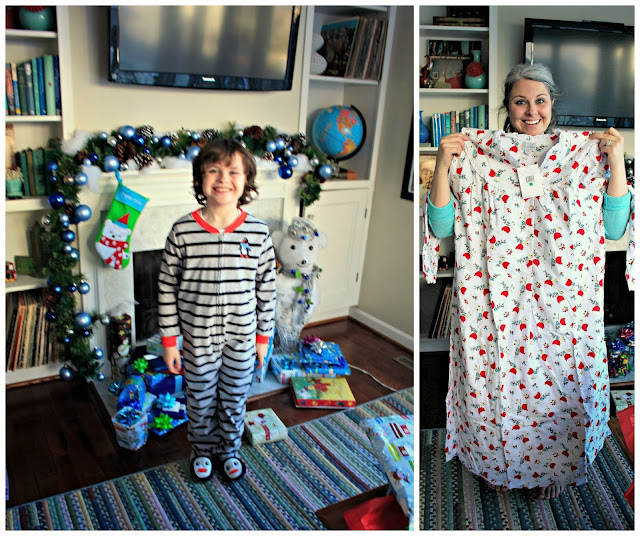 After making cookies all day, we kind of has cabin fever, so we decided to take a drive to see all of the Christmas lights and luminaries. We ended up in my Mom's neighborhood, so stopped there for a few to see their lights and the tree and Lucy the dog.

I'm sorry, just one more cookie montage. I just love them so much.

Noah chose to leave these two for Santa. Then he went right to sleep, only to wake up at MIDNIGHT and again at 1:00 am, before finally being up for good at 5:45! We opened presents at 6:00 am. It was early, but I didn't mind, because seeing Noah so happy was nice. 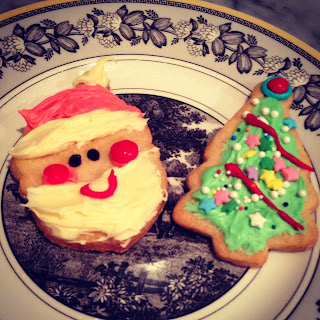 More about all of that later! I hope everyone had a nice holiday as well!

And now I want that nightgown too! It's a great one. Cotton flannel sleepwear is my favourite part of winter. I even did a post last year specifically about my flannel pjs! As I type I'm wearing a light blue pair with little polar bears wearing red scarves, and pine trees all over them. I guess we can be dorks together.

Loulou, that's why you're SO GREAT!!!!
Oh man, we sound like two peas in a pod huh? I LOVE that you love flannel pajamas as well. I'll have to look at your pajama post. These are my first flannels in a long long time, and I have to say, I am now hooked!

One day we'll have to wear our flannel pajamas while we bird watch with our cats during a crafting session and then we will have to blog about it. And drink coffee. Lol. ;)
Thanks Loulou! xoxoxox