Here, Make This Food. Biimbap and the World's BEST Casserole for Your Holiday!!!!

And the snow continued! I'm so glad that it's been snow-ish in some shape or form over the past week, but I'm REALLY worried that the higher temperatures and rain we are getting might ruin it all. My fingers are crossed that the snows stays, but we have had and continue to have temps in the upper 30's and lots of drizzle! Last weekend in the midst of the snow storm, my Mom was sure that we'd have a white Christmas, but I argued it wasn't a sure thing. I really hope she turns out to be right.

This is a snowy view from my bedroom, window. It isn't the prettiest scene, but I have to say that for  suburban Detroit, I might have one of the more interesting bedroom window views. It's never a dull moment. We've seen parades go by, and regularly have bike pelotons fly past. Ambulances and fender benders and this man that we call "BMW Beard" nearly everyday. BMW Beard is this guy, maybe in his 20's. He has an M3 BMW, that's the souped up, tuned 3-series. He has a big bushy beard and always wears a baseball cap and sunglasses. He floors it when rounding the curve in front of our house, and often fishtail up to the light. Think  Rob Zombie in a BMW, driving like a tool. Here's the weird part though, some days, he drives past here TEN times a day! Over and over.Everybody knows of the mythical BMW Beard because he cruises through the center of town repeatedly without any shame.  And here is the even WEIRDER part, he ALWAYS has his windows down, sunroof open and is BLASTING music. But not just any music, POWER BALLADS. You know, those "emotional" rock anthems about love from the 80's and 90's that have a running time of too long and barf? And, I KID YOU NOT. (Ask Jon!) BMW Beard EVEN drove past us in the MIDDLE of the snow storm last weekend with his windows and sunroof open, bumping a song.

We've gone through every theory in the book as to why he circles town over and over. Pizza delivery? Taxi cab? Security force in a strategic disguise? Who knows. All I know is, it's characters like BMW Beard that make looking out my window so much fun! 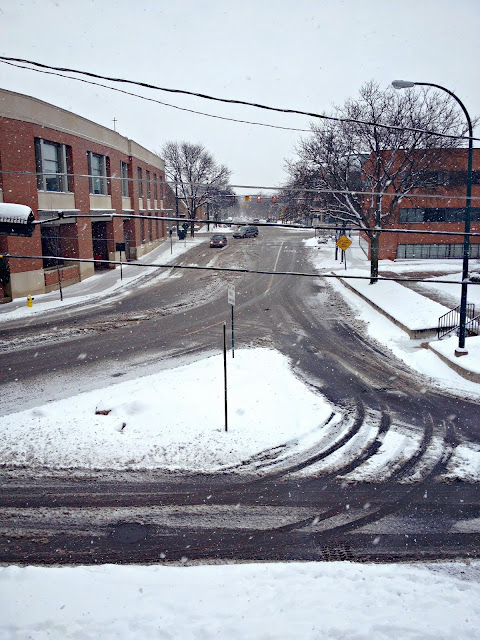 Here's what I want to share with  you, a recipe for BIBIMBAP!  For those of you not familiar with this traditional Korean dish, bibimbap is essentially a bowl of warm white rice with sautéed veggies, an egg and some sliced beef on top. Usually a person adds hot chili pepper paste to spice things up, and the best times are when your bibimbap is served in a sizzling hot "stone bowl".  Because this dish arrives at such a high temperature, you can stir the raw egg that's placed on top into your rice and it actually cooks the egg! I think though, the most fantastic part over all is the way that the rice at the bottom of the bowl becomes all crispy. It forms a rice crust from the heat!

Here is a beautiful picture of homemade (non-stone bowl) bibimbap that I found to give you and idea of what it really can look like. (compared to my own!)  The site is called "Use Real Butter", and while I didn't use their recipe last night, it looks absolutely delicious. Take a look! 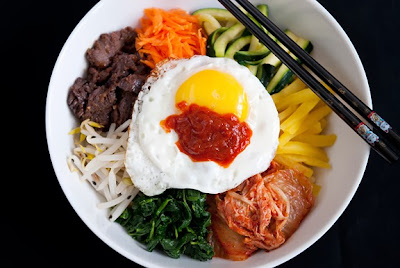 So, yesterday I decided to make our own bibimbap. Jon and I love Korean food. We love all kinds of food, especially from other cultures! I thought it would be a fun experiment. I went into this knowing that there was no way I'd make anything near authentic, but that didn't matter to us so much. I'm glad that I gave it a shot because it was delicious! Even Noah agreed to have a small bowl of his version - rice, egg, mushrooms.

THIS is the recipe that I was using from Allrecipes. It's for a vegetarian version, but you could easily add grilled or sautéed beef or other meat on top.

Basically, you start by cutting zucchini and carrots into matchsticks. Then you sauté them in a bit of sesame oil. Next you add in bamboo shoots and mushrooms. Really, you could choose to make any veggie. I quite like spinach with a soy/sesame marinade on mine.
Meanwhile, you should be making white rice and fried eggs. Bibimpap served in stone bowls include a raw egg, but since our bowls at home aren't hot enough to cook the egg, I went ahead and made some fried eggs to put on top.

When the veggies were done, I turned down the heat. Then I took some chopped green onions, soy sauce and black pepper and added it to the rice. This part threw me a bit because all of the bibimbap that I've had has always been pure white rice. I'm surprised to say though, this flavored rice, this came out delicious!

When everything is prepared and ready, all that is left to do is assemble. Rice in a bowl, veggies and egg on top. Also, it's recommend that you serve with sweet, hit chili sauce to give things a kick. We used Sriracha sauce.

In addition to the Bibimbap, I served miso soup, a little kimchi, and a Japanese cucumber salad that was so easy and refreshing. Oh! And we drank hot tea, just like we do when we go out to our favorite Korean restaurant. Sometimes dinners that stray from the ordinary can be a lot of fun! 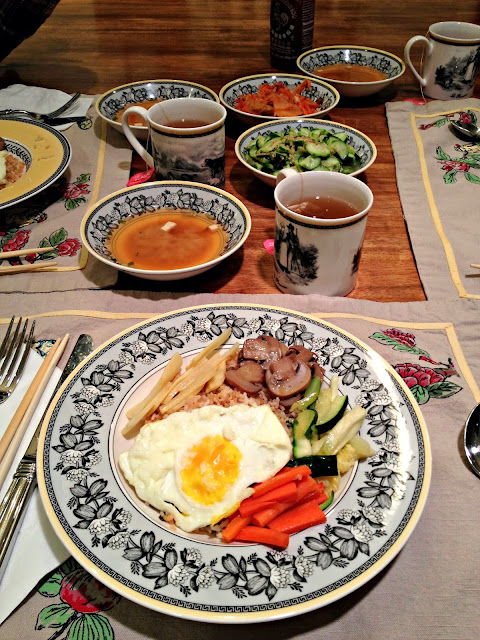 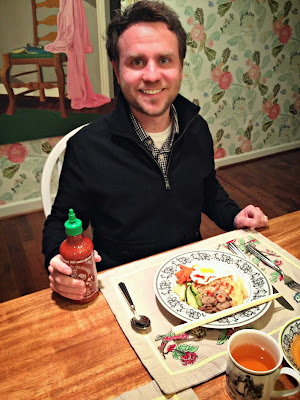 And now I present to you:
Everybody's Except for Noah's Favorite Casserole!

I feel as though I've mentioned this recipe to you before, but it's SO delicious and SO easy, that I just had to let you know AGAIN! This eggy, cheese blintz casserole is a sweet and festive treat. It's perfect for Christmas breakfast or any holiday gathering. It take less than five minutes to whip the ingredients up and get it into the oven - and then you're done!  HERE is the recipe from Allrecipes. They call it a Blintz soufflé.

Basically, you melt butter in the bottom of the pan, lay a bunch of frozen, pre-made blintzes down, and cover them in a mixture of eggs, sugar, and sour cream with a splash of orange juice. It's that easy! 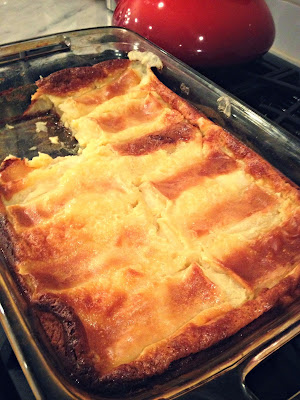 I really need to apologize for my food photography. These pictures make everything look less than appetizing. I need to start using my camera instead of my cell phone, but also though, the lighting in the kitchen, especially in these dark winter months is just terrible. I PROMISE, the blintz soufflé was better looking in person, and I really really think you should try it!

Sever with sour cherries on top or on the side, or any other fruit that you might enjoy. A dollop of sour cream too! 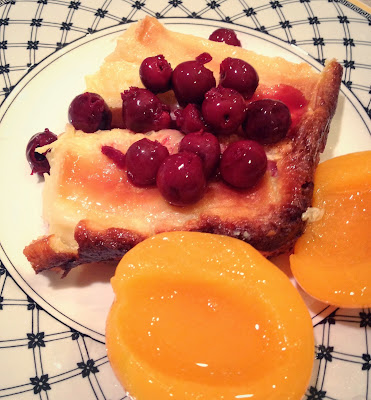 I turn my back for ONE second to put away dishes and this is what I find. Anyone for some Furry Krispies!? Yum. 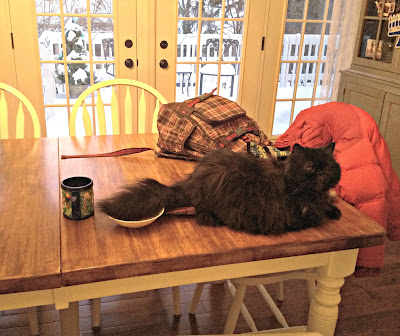 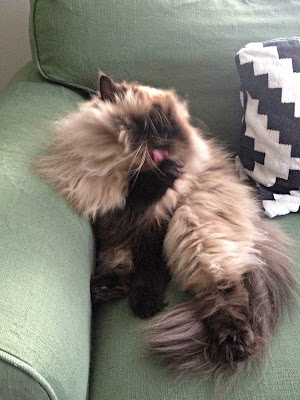 Until next time!
xoxoxox,
Lauren