Last weekend was a great weekend. I think it had to do with it being the perfect mix of getting things accomplished and having fun. A rare convergence I would say! Here are a few of the highlights.......

I received my first homework assignment. Well, we all did. There is traditional event in the second and third grade building called the "Turkey Trot" that happens most years on the Tuesday before Thanksgiving. To be honest, I'm still not totally clear on what the tradition entails, but we understood the assignment. We were asked to use materials found from around the house to create any kind of turkey, and the turkey is supposed to represent what we are thankful for. Tomorrow morning, parents and children will walk around the building looking at all of the families' turkeys on display. It sounds nice.

I have a surplus of yarn, so our turkey was made out of yarn balls, construction paper and recycled chopsticks. It took all the will power that I had not to use glitter. This is probably my first non-glitter craft. I still enjoyed making it none-the-less. Maybe I should have used glitter. 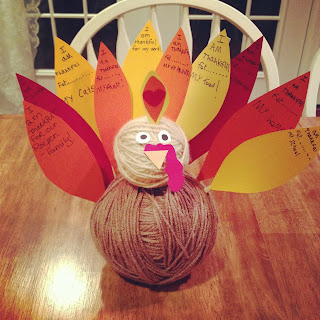 Noah received a pair of rollerblades for his birthday from his grandparents whom he calls: "Lady & Zayde." He LOVES them! This weekend the highs were 30 and 28 degrees, yet still, all he wanted was to go outside and rollerblade. The pictures and video below are from his first time trying them out! 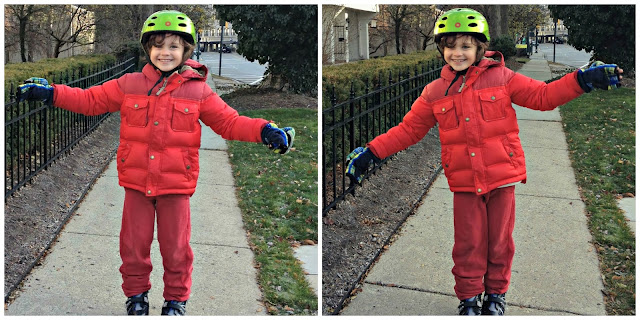 Learning to break is essential. Maybe even the first thing you should master.....especially if you live on a HILL!!!!

Our friend, who is called "The Colonel" for some reason unknown to me, recently purchased "Barbara", a 1965 Land Rover Discovery. She's a beauty! The colonel came by to introduce us.  He brought our mutual friend Justin.  They must have been frozen because Barbara was only wearing her canvas soft top with he sides and back rolled up! It wasn't even 30 degrees out! It was also SNOWING! 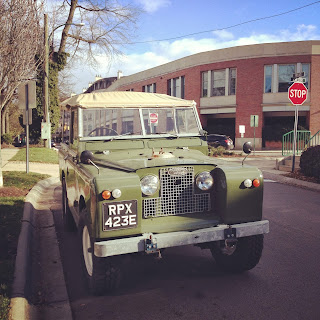 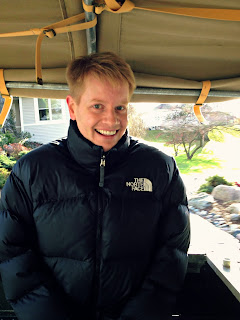 Noah got to pretend to drive Barbara. The colonel says that she has a something called a double clutch. 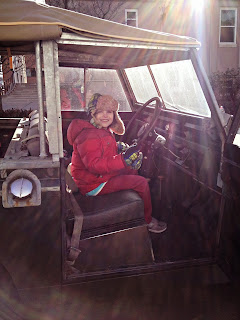 And then Barbara drove off into the frigid sunset.

Speaking of frigid..... I was outside ALL DAY. From about 9:00am until 4:00pm, except for shoveling a sandwich into my pie hole, and a quick trip to Target after we realized that one of the strands of lights were broken. Urg!!!! (Don't ya hate that?)  We were putting up the outdoor decorations. They came out nicely! Here is a small glimpse. There's also more fresh garland and lights and balls, bulbs, (what are they called?) around the front porch, and a big, silver bow. 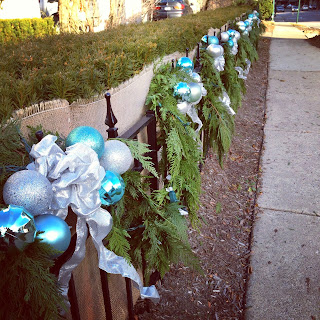 The next day we had to make a stop at our local cider mill, as she's closing at the end of this week! :(
I've written about this Cider Mill before. It opened in 1832, and while I don't go back quite that far, I've been visiting Franklin Cider Mill since I was a baby! It's a tradition, probably for everybody around here. It's always so so sad when they close for the season. I regret not buying extra cider to take home to freeze, it's that good. 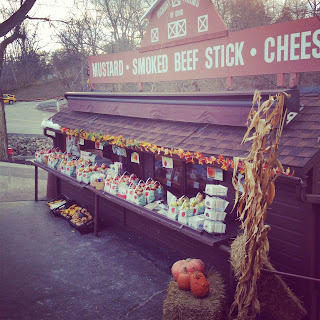 Look! Here's how they make the cider!

And here is how you best enjoy the cider and donuts. 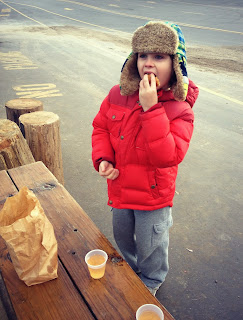 Because we were there at the end of the day, the man behind the counter asked us if we were staying for a while, and when we said: "yes", he gave us a bad of old donuts! He said they'd gone stale, but that we should feed them to the ducks, and that sometimes the ducks will eat right out of your hand!
And they did! 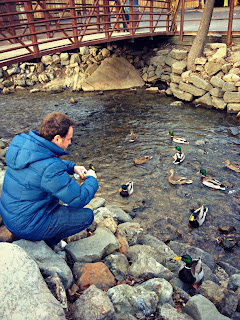 Have a nice winter, spring and summer cider mill! See you next fall. I love you!!!!! 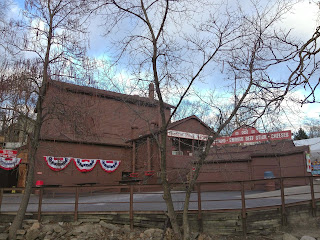 The last step in decorating the house for the holidays, is making paper decorations for the front windows. I've done this for the past two years. Originally, it was just for fun, but then I people started commenting on them, saying that they really enjoyed seeing the little vignettes that I made for the windows! (I also decorate for other seasons and holidays with the paper decorations.) We live on a street where people come up from the neighborhood and enter town, so there's a lot of foot traffic. Also we have a church next to us and a preschool too. So, we get tons of people by. The preschool classes walk past our house several times a week when they get fresh air. I can always hear the teachers and the kids talking about the holiday decorations and playing "I - Spy" with them. I feel like I can't stop decorating! I'd let people down. Especially the church families, several have said that they wait every season to see what's up next. This is pressure I tell ya!
Here is what I've come up with so far..... 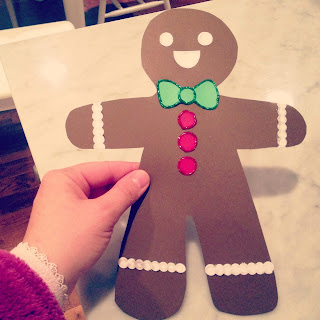 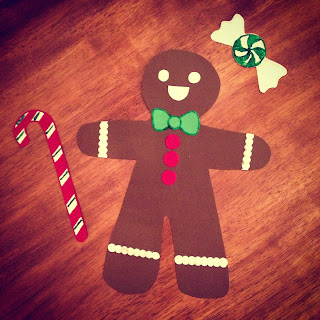 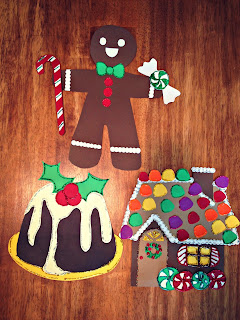 I need to keep at it. I wonder what I should make for the other three window panes!?

Until next time!
xoxoxoxo,
Lauren

What a happy skater you have there! Cute.

I love what you've made so far for your windows. You are a good artist in deed.

Thank you Loulou, it's been fun so far. I have a bit more to go. The glitter is the most fun part!
xoxoxoxo :)