Oh my GAWD.  This week was so long and so busy.  I can't. I can't even.
I don't even know what that even means.
All I know is that I'm tired, and it's Friday, and I'm happy that it's Friday. TGIF!
(Do you remember the restaurant TGIF Fridays? WHY was it called "Thank Goodness It's Friday FRIDAYS? Why two Fridays? I don't get it. It's been bothering me for twenty years.)

So, this week has been as hectic but productive, so that's good!
I've hosted guests, (by tonight it will be twice), went to a meeting, went to an appointment, cleaned the house and did the laundry and cooked and washed dishes and  taxied and exercised and wrote and ran errands and  etc...etc...etc.... Now I'm tired.

I don't have much to report, except that Jon was walking around checking his Weather Channel app for rain when he FELL IN THE POOL!  Poor Jon, it was right before leaving for work yesterday morning, work clothes and all. Thankfully he was totally un-scathed and fine.  Minus an outfit of soaked work clothes and shoes that still today weigh 10lbs each with water. Luckily there was a pair of newly dry cleaned and pressed pants to put on, and a shirt that only needed a little ironing. Noah and I were surprised that he fell in. But, these things happen! To Jon......  ;)

Oh, and also, that little piece of twisted paper on a stick that you see below, it is the best 75 cents that I have ever spent. Who knows what it's called, but you can get them in a lot in dollar stores and dollar bins. We were lucky, and found this one for seventy-five cents at our local toy store. 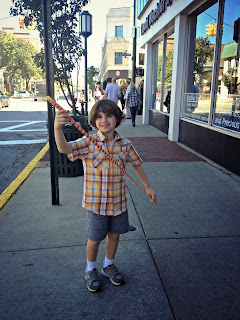 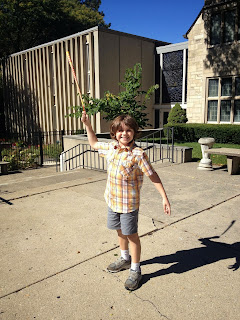 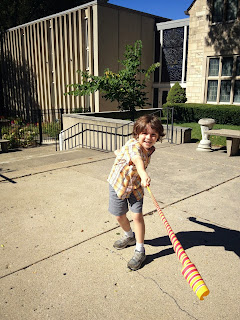 Well, until it broke. But that was a lot of play for seventy-five cents. And, his school was unexpectedly closed for a water main break, so I kind of needed a seventy-five cent miracle that day.


Also, I took a picture of these berries on the Arborvitae.
I remember liking these berries since I was a child. NOT TO EAT. DO NOT EAT. I don't mean "like" in that way. I just think they look cute, and squishy, and have a little hole with a seed. They're nice. 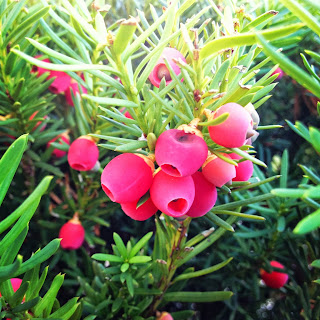 Look what has started! Fall leaves! What kind of trees are these? They're everywhere. Their leaves are very small and they seem to have changed before other trees. They're all falling now, and it look like golden snow! 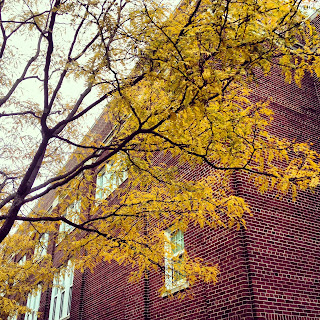 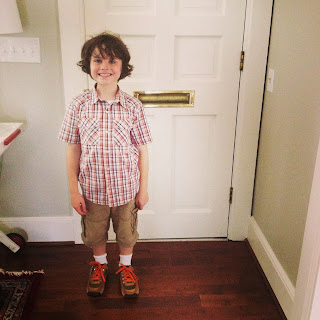 Now that I think about it, given the fact that Jon fell into the pool yesterday, I probably shouldn't have asked him to do this.....
The annual "Put Three Pumpkins on the Roof" tradition. A lot of Grannies especially, have stopped to tell me that they like this one. Please remind me not to call Robert to put up the storm windows this year, until I'm ready to take the pumpkins down. Nothing worse than not being able to get out your window when there's three rotting pumpkins on your roof! 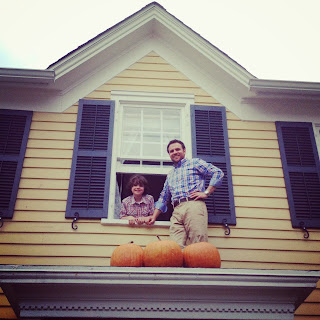 I'm not sure why, but I felt an urge to buy fall-scented room spray this morning.
I kind of have a feeling that it's totally toxic, so I made myself a rule to ONLY SPRAY THE ROOM FROM THE KNEES DOWN! Then I went home and bent over and hobbled around making my house smell like pumpkins while holding my breath. And almost passing out. 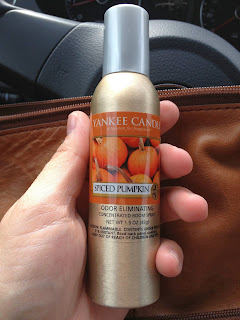 Here is how I surprised Jon with the Autumn Awesomeness! I'm the blue words, he's the white.
(Ignore the first half of screen shot where we talk about random emu.) 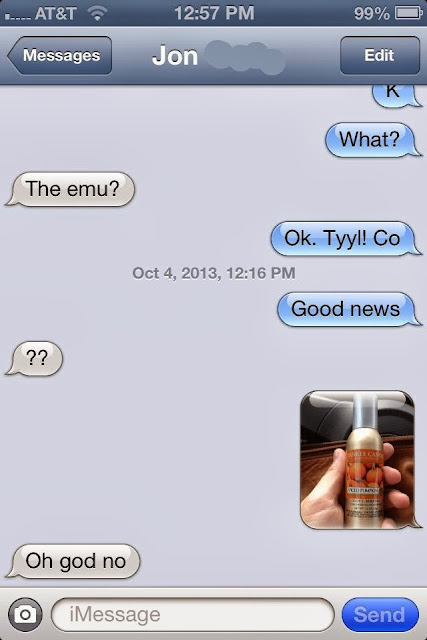 I think he was as excited as I was, Amen!

Posting has been a bit sparse because I haven't been spending my afternoon time at the coffee shop. This week was just too busy, and I realized that when I come everyday, I don't get enough done at home, at least not enough to my satisfaction.

I was talking over Skype with my dear friend Laurie last night. She's in London earning a master's in publishing.  It was THE BEST conversation. We talked about writing, and one of the things that I mentioned is that I've been dismayed to find that I'm not able to easily find enough time to get all of my   housework done and be a daily blogger.  It's more difficult than I thought. We also spoke about having an authentic voice in blogging too. I did have a post for you mid-week, but then I re-thought it because it was a tad controversial. The post was just about an interview with Richard Dawkins, founder of "The Foundation for Reason and Science ". He said something surprising to me, and a I wrote a post about it, but then didn't publish.
What do you think? Is authenticity important to you? Do controversial topics drive readers away?

Today is Friday, and I finally made a bit of time to write at the coffee shop. A week or so ago, I was predicting the last of the warm weather. Boy, was I wrong!  *Blush*
Today it's over 80 degrees, and we've had similar weather yesterday. So instead of my usual Almond Latte, I had and iced coffee with almond milk! 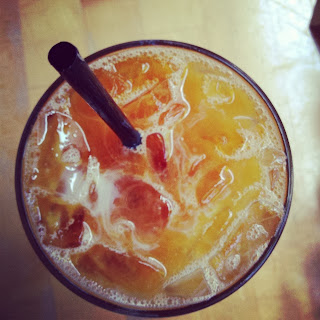 Also, I figured, since I was saving $4.50/day by not coming and ordering my almond latte, I could splurge and order the $9 quiche for lunch. I never ever go out to eat at lunch. It's so nice though! I really enjoyed it. I should go out to lunch with myself more often.

(I see Chabadniks! They're walking down the street as I type. Must be Shabbat! Thing I don't get, is how do they know? How do they really know, when they pass us on the street, that we are "Jewish-ish"? Then they ask if we light Shabbat candles. And then give us some. But they only ask Jews, they don't ask that of others, which I have to say, I respect. It's an innate Jew-dar, huh?) 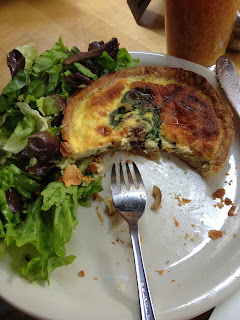 Tonight is the rare occasion that I'm actually going to be social instead of anti-social! I've organized a triple date including dinner and cocktails.  Knowing these people though, it'll probably be a drunken free-for-all with sticky beer-covered bars, mosh pits and pieces of meat being thrown down my shirt.
I shall report back.

Please don't let "TGIF Fridays" burden you anymore. Because it is in fact, "TGI Fridays" (see http://www.tgifridays.com/). Somehow your mind must have interjected a stray 'F'. Our minds do funny things like that. :)
Anyway, thanks for posting. Like the blog.

THANK YOU!!!!
Hahahah. You know, as soon as I posted this, several of my friends told me that it is indeed "TGI" !
Now I can get over it!!! :)
When I was a little girl, I called it : "TICIF Fridays" and nobody ever corrected me. So, I always wondered.
Thank you for taking the time to let me know. I appreciate it very much!
xoxoxo,
Lauren :)