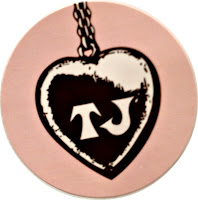 Well, it's already day three of the Trader Joe's Challenge! Tonight I actually remembered to take photos of dinner! (Don't get excited.) Noah had a playdate, and ended up eating with his friend, so again, it was just Jon and I for dinner.

Tonight I made Trader Joe's Enchilada Casserole and Sesame Toasted Sugar Snap Peas.  Ok, I know it's a little off to pair a Mexican dish, with something Asian, but I did. The crunch of the snap peas balanced out the softness of the enchiladas, and it was a way to get some green veggies in.

(Ok, FINE! Do you REALLY want to know the truth!? Maybe it wasn't so much a a pairing, maybe  I just wanted to eat sesame snow peas.)

Again, to my surprise, two of the easiest and quickest recipes out there. I altered the enchilada recipe to make it a vegetarian , cheese-only enchilada, (possibly a mistake) so that took off a lot of prep time. Also, I held the sour cream for the end, as a condiment. You really can't get any easier than these two dishes.


These are the enchiladas, hot-out-the-oven. I kind of burned it, but Jon liked the enchiladas! Which is  a first, because I've tried several cheese enchilada recipes that weren't great. I think the Trader Joe's Enchilada Sauce is what made this. It had a little kick! I found the filling, which was just CHEESE, to be a bit bland. Next time I would add the green chills and some onion as the recipe called for. It was ok though, not terrible. 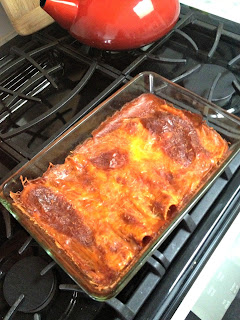 The sesame snow peas though, I thought that they were delicious! Especially straight from a warm pan. Yum, yum! We already had sesame oil on hand, and also a jar of Gomasio. Oh you guys...if you have not already experienced what is the magic of Gomasio, you MUST.  Gomasio is a Japanese condiment that mixes only "goma", roasted sesame seeds, with a bit of "shio", salt. In this case, it is sea salt. Gosh, just delicious. I added more gomasio after lightly cooking the snow peas. They were crispy and fresh, with a nutty flavor and a bite of salt. Doesn't that look appetizing!? NOT. I'm sorry, this is pitiful. The hot-pink placemats don't help, but they're our kid-friendly, throw in the washing machine mats, that we've just been in the habit of using. Sometimes I feel badly for making Jon eat so many vegetarian dinners. I DO cook meat for Noah and Jon , especially Noah. I know though, that Jon is trying to cut back on his meat in-take. I don't impose my personal vegetarianism on anyone. I work hard to keep Noah's meals balanced, and if Jon says, "no veggie dinner for me tonight", I listen. But actually, it is so rare that he says that he wants a burger or steak or chicken, so it just seems to work. BUT....I am a Mother/Wife, therefore I have GUILT. Always. 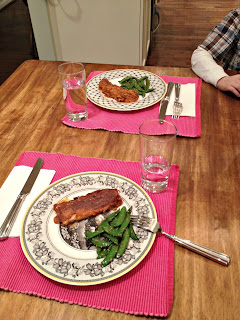 And here is wee Noah, doing a spot of homework. Just elated that I have not asked him to take a "no- thank- you- bite) of enchilada, nor snow peas. 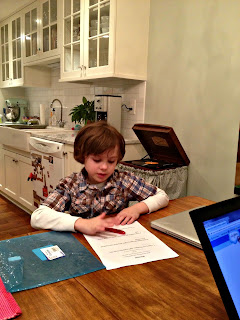