A Walk at Cranbrook in the Fall

I've blogged about Cranbrook many times before.  (Check out the two old posts in pink!)
John Lennon had Strawberry Fields as a kid, I had Cranbrook. This is where I'd ride my bike and walk the grounds. It really is a magical place. This very large oasis of carefully curated land, buildings and institutions, is renowned for it's architecture and design. Not to mention a well-respected pre-K through 12th grade prep school, and a highly regarded graduate school for art and design. There is also a hundred year old country estate with immaculate gardens, fountains and a lake. An art museum and science museum too.  It's just too gorgeous.

In a effort to relax more, we took a walk, and this is what we saw!...... (I'm sorry, I couldn't choose which pictures to post and which to cut.)

This is a view of the Cranbrook Art Museum and it's giant reflecting pool. Can you see Noah and I? We're the little specs on the stairs.
Right now, a FANTASTIC exhibit is in it's final weeks: George Nelson - Architect/ Writer/ Designer/ Teacher. (Additional description)

"George Nelson is considered one of the most influential figures in American design during the second half of the twentieth century. Operating from the western side of Michigan as Design Director at the Zeeland-based furniture manufacturer Herman Miller for more than twenty years, Nelson had his sights firmly focused on Cranbrook, which was also playing a defining role in the development of Modernism."

If you live in the area and have any way of going, I highly recommend this fascination and well presented exhibit. 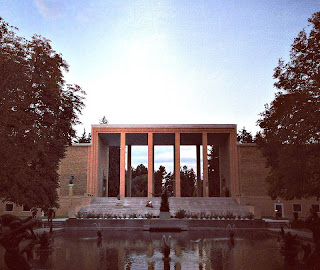 My tights match the flowers. 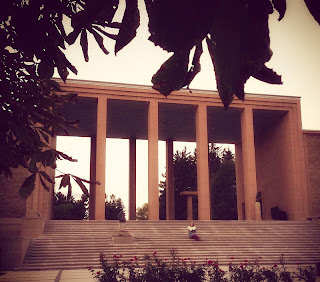 I look weird, kind of GREEN, but this was interesting. We went looking for an old (imagined?) totem pole that used to stand in the woods upon a hill near Christ Church Cranbrook. I SWEAR it used to be there! All that we found was this clearing of teeny tiny Maple trees. <3 p="p"> 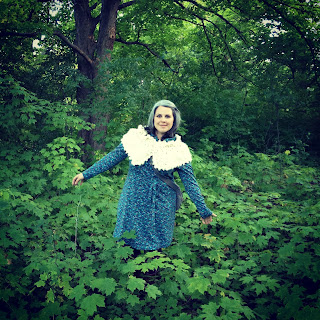 That's St. Dunstan's Theater. The theater lies along one of Cranbrooks stone walls, that ring the perimeter of the property. Beyond the wall, and past the theater, there is a wonderful Greek "amphitheater" or outdoor theater that was built in 1916 and is still in use.  We saw Shakespeare's "Pipin" there! 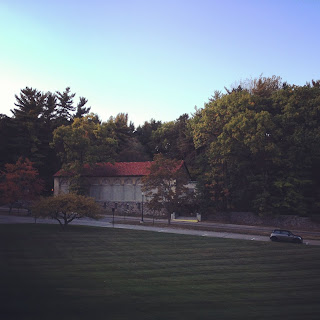 The trees are just so gorgeous. This is along a street that houses the studios of the graduate students. It's incredible, like stepping back in time to a slow European lane. There are row homes, studio buildings and grander residences butted up against each other. Eliel Saarinen and Albert Kahn are two of Cranbrook's most well known architects. 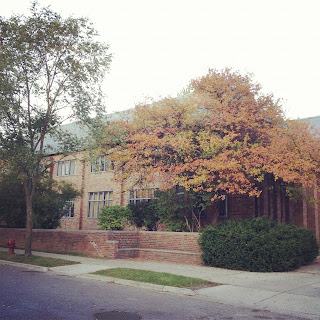 A tall tall statue. They used to have another large-scale statue when I was a child. It was actually a similar structure in some ways. Only it held a very large, swinging platform that you could ride on. It was amazing. 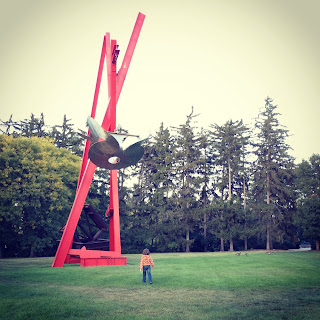 Third generation. My father had his picture taken here as a child, and so do I! 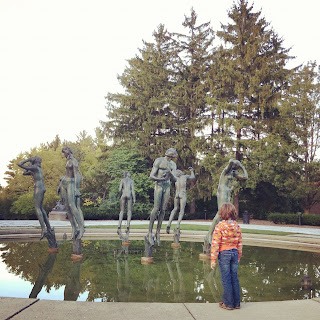 I LOVE this photo. The light quality was so nice this evening. 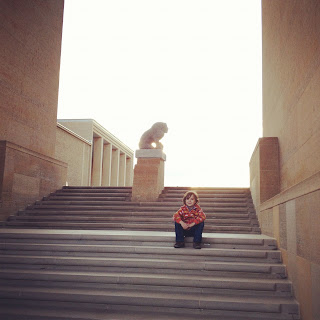 This is a long walkway that leads down a steep hill from the art museum to the lawns below Cranbrook manor house. We're nere the bottom here, so you can't see how steep, but I used to Rollerblade like a weirdo down this hill. It was so uneven , of course I took many spills. 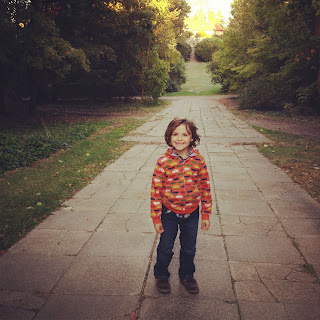 A pretty fountain at Cranbrook House. 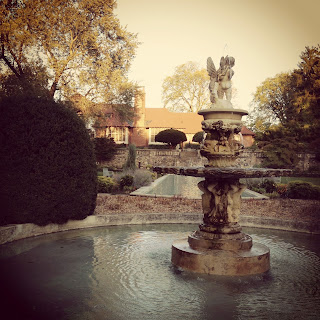 Gazing out over the reflecting pool. So relaxing. 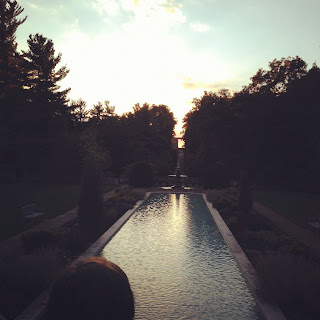 Running up and down all of the stairs and terraces, so rela......I mean invigorating. 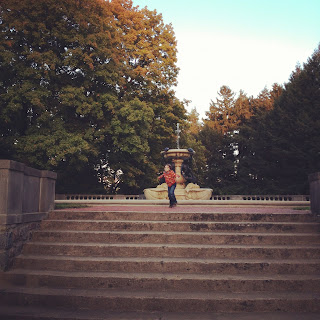 Cranbrook has statues and other art tucked all around. 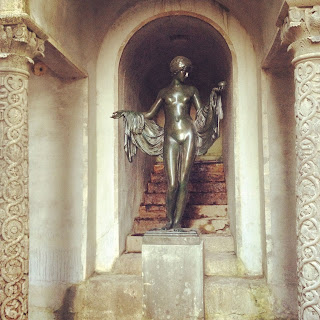 The Oriental Gardens! Quite possibly my favorite place on the grounds. Situated between Cranbrook House and Kingswood, the girls' school. 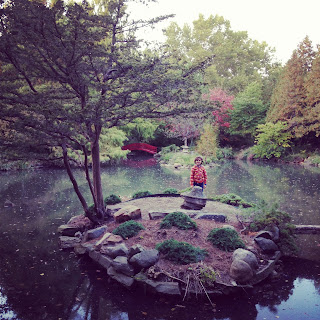 A path on the way home. 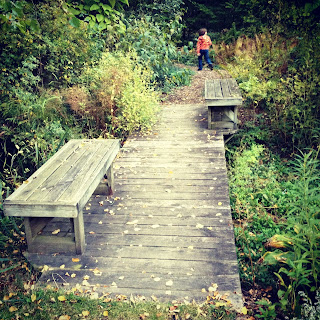 There is a Ginko tree around here. I just love their leaves. 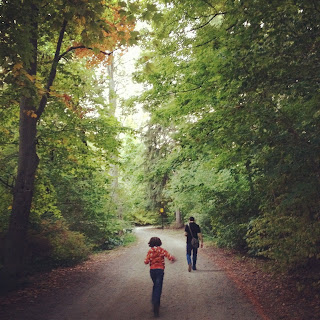 The house is very very pretty. There was a bi-plan flying around above us! I wish I was able to catch a picture. 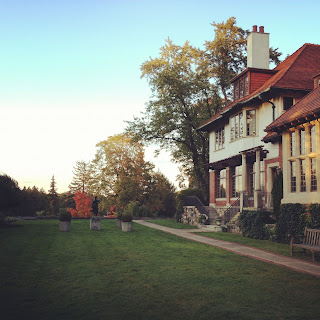 Look at the colors! (And the faces.) Lol. 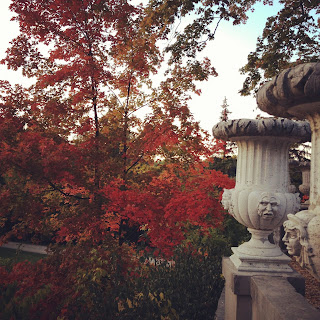 Such a gorgeous sunset and such a beautiful setting! 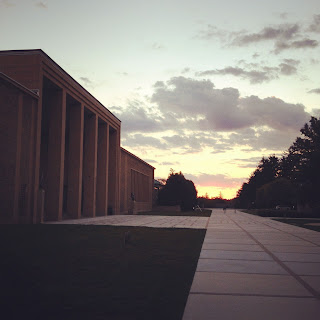 See you next time Cranbrook! 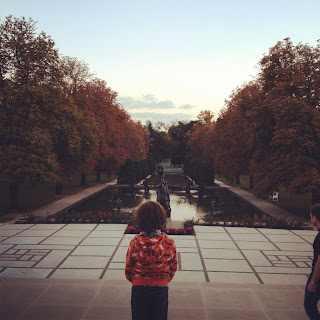 I grew up close enough to Cranbrook that I should have been there before but I haven't. Now you have me wanting to check it out!

Hey Lindsay! Thanks for the comment. Yes! Definitely check it out of you can. Cranbrook is really amazing. I like the science museum too! :)