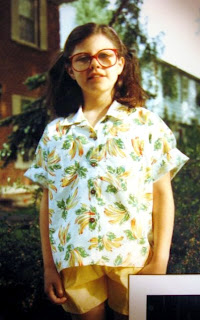 Poor me. I've always struggled in the clothing department. While my parents claim that the Esprit banana shirt and yellow culottes with knee socks were fashionable at the time, I'm starting to doubt. It's kind of funny that I still dress like such a weirdo, given my sartorialistically rough childhood, AND the fact that I hold a degree in apparel and textile design. (Don't do it. I should have stuck with Psych.)

I've just never out grown my love for prints and colors. It must have started with the plaid frame glasses. They pre-date the banana shirt. Or maybe it was the moon boots or watching all that Punky Brewster.

At any rate, it all translated into Laura Ashley floral print "Adult Rompers" in middle school, (WTH?) and some horrid tie-dye tee shirts in high school, with tiny rainbow bears dancing in the foreground. Omg.
And did you know that once, I MADE my own "Gone Phishing" shirt!?

Sadly, adulthood has not been any kinder. I have this problem, I call it clown-girl syndrome. I'm just so drawn to the big, bursting patterns of Oilily. All the colors of the rainbow mixed together! Boden does a great job with color and print too. If I could wear Hannah Andersson kids, I would.


So I go into a store, or look online, and I'm drawn to colors and prints. Then, I buy something like these:

And wear them, the PURPLE neoprene and rubber boots, EVERY SINGLE DAY, from October through March. Because we all know how much purple boots go with everything. Granted, part of the daily purple boot wearing is because 1.) after funding a total interior and exterior house renovation/move, I was being thrifty, and not about to buy a second pair of boots, and 2.) well, I might have..."lost" my older, more normal colored pair of boots during the move. They're still out there somewhere, hidden in one of the 62,000 boxes. I have yet to find them, it's not for lack of trying. Actually, I think they might have been accidentally given to charity. At least they went to a good cause. Right!?

So I buy all this crazy-town stuff. And because I'm a little slow sometimes, it takes me a week or so of wearing it together, to realize that darn! None of it goes together. Jon never has a negative word to say about my outfits. He's pretty nice about everything. Sometimes I ask him for the truth, but he's always polite about it. This winter was the first time he's ever made an unsolicited comment. An order arrived from Land's End. Their clothes last a long time, I think they're quality made basics, and their petites are cut well. So this order arrives and I put on the outfit that I saw online. A screaming red sweater with giant lapels, a cool-aide purple a-line skirt, grape colored tights, and my lavender boots. And Jon was all "What are you thinking"!? That was startling, a comment from Jon, and it did get me thinking. "Hmm....I might not match"!

Ok, so now I've vowed to never again get into this predicament. I've refused to spend more money on my winter wardrobe, I just have to make do for now with what I have..... a bunch of oddly colored dresses, some dorky Nordic sweater, a bright teal jacket, and a peach and pink quilted mini-backpack. OH.MY.GOD. NO. But YES. It is the ugly truth.

Fear not Lauren, for spring is redemption time! I have a plan!

Oddly enough, non-sensically in fact, I have ALWAYS also loved simple, understated pieces in grays, whites, blacks and neutrals, in tiny prints. I have just never thought I could pull it off. It seemed too mature and sophisticated. I have recently in my old age learned though, that I am now old enough to trade in the hot pink dress with the orange cardigan, for something a little more monochromatic. The plan, my clothes will be a blank canvass, my accessories or my mouth will do the talking.

First, I did some in-depth googling on how French women dress. Then, I took a book out from the library and found my "color season". I am a winter. Lolo is a wintery mix! Therefore, it all falls in place, I supposedly look good in whites, blacks, grays and taupes.

Hey, just today I told my Mom that my favorite color is taupe. I'm changing! I'm becoming a woman!

The plan is, is to find some well made, affordable, NEUTRAL basics that I can mix and match. Then any fun bags or shoes or accessories will be the icing on the Lauren cake.
I'd like to buy clothes from HERE (Madewell Clothing) and HERE (Old Town). Aren't these artisan made frocks dreamy!? They're just a little too pricey. I spill on my clothes and get caught in branches and on rusty nails all the time. I fall down too. In muddy puddles.

Ok, so without further rambling. I present to you my springtime very much hopeful, dream come true wish list:

Step one, some basics:

I've already purchased these three dresses, but they haven't arrived yet. I wish we had a Land's End Store near us that also carried all of their petites line.

Original print V-neck dress. (In Navy/white polka-dot!) This picture doesn't say much. It's not the same print that I bought. If you would like to see the dress, you can click on it. I ordered in navy blue with tiny white polka-dots.

Here is a nice basic, cotton dress. I purchased one in black and one in "Mushroom".

Honestly, before I had the black and mushroom in my online cart, I had selected the wild cherry red and regent blue. I think they would both look pretty, and they're in my "color season"! Omg. But...then I would be going all color crazy again. I really need to be able to mix and match.

This striped jersey knit skirt looked so so so much better in the paper catalogue. You can see the stripes in print. It's in a Chevron pattern, really neat! I would go with the pink marble or the urban khaki.

I think it would be easy enough to find an interesting white tee to go with the skirt. I'm not one for collared white shirts at the moment. Peasant tops are so adorable, but they're too poofy for me.
I do kind of dig this sweet, little peter-pan collared shirt from Land's end though.

I also need to find a white and black or gray short-sleeved cardigan. It should be easy enough at somewhere like Target. I do love this Cath Kidston Lace Stitch Cardigan in white. So pretty. 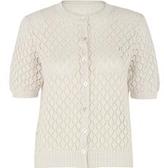 Here is a Land's End Modern Rain Swing Coat. I know it's a little boring, but it is timeless and will go with any bag, and scarf, and outfit.

I thought about buying my first trench coat, but they were just too masculine for my taste.

All of the above seem boring and mundane, (And seeing it all laid out is actually making me second guess myself) but now for some fun stuff, accessories.......

Only when your Dad is a woman's footwear designer, would you have the following email exchange.......with your Dad.

Hi Dad. I LOVE these Lotta of Stockholm sandals, they are so cute! What do you think!?

Sent from my iPhone

> Lauren
>
> These are SWEDISH HASBEENS. Check on Nordstrom.com
>

That's so rude ! NOT a has been, a classic! I don't like trendy. Trendy just means you let other people think for you, and tell you what's cool. Think for yourself! Be an individual!

Sent from my iPhone

Ok, now I will show you some Swedish Hasbeens:

Ooooooooh- kaaay. Ooops. I got preeeety mad in that email. It turns out that the name of the shoes is Swedish Hasbeens! LOL. They make some cute shoes. I really like the red, but will probably go for the natural because they'll work with anything.

love this simple, Cath Kidston cross body in "spot". It's understated in a durable oilcloth!

And, how about this GORGEOUS Fossil Key-Per Tote in yellow-multi. Just look at those yellow beetles! :) Click on the Fossil link. It's so worth seeing!

When I saw this retro inspired necklace by Lenora Dame, I almost lost my marbles.

Come to Mama, you little thing.
ANd these puppies:

How about this interesting broach from Clay-pot.com?

Phew! I think that's all I've got for now. Oh! except here is a Coolibar women's SPF hat. I'd like one in mushroom.

I LOVE your style. don't change!!!