So, we have an old knife block with a set of knives. Ten years old to be exact. They've been good to us, but are now very dull, and a tiny bit rusty around some of the handles. It's just time. I bought Jon a nice chef's knife for Chanukah. He liked it, but decided he would return the knife and choose us a whole new set. Good idea I thought!
Fast forward to today. The Chanukah knife has yet to be returned by Jon, and he still hasn't chosen a new set. (This is his area expertise and interest, and I gladly agree to let it be Jon's thing).
Buuuuuuuuut It's been three months! I'm cooking more than ever, to save money by eating in. We've been using The Six O'Clock Scramble to plan meals, which I keep meaning to post about. All of this cooking entails A LOT of fruit and veggie prep. I need a sharp knife or two around this place! 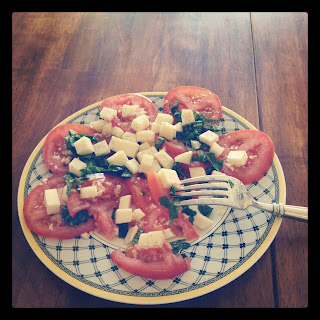 (Two Roma tomatoes, fresh basil, garlic,salt, pepper, mozzarella.)
Today at lunch, I was struggling to cut through a Butternut squash with one of our old knives.
It was treacherous, really, and I finally decided to just go ahead and open and use the Chanukah knife. But I felt kind of bad about it. Or, like I was BEING bad. It was Jon's knife and I was taking away his option of returning it and putting it towards something he wanted. AND, I have to admit, in my head, I was all frustrated and huffy and puffy and thinking...."WHY is it taking him SO. LONG. to return one stupid knife!?" I was annoyed. 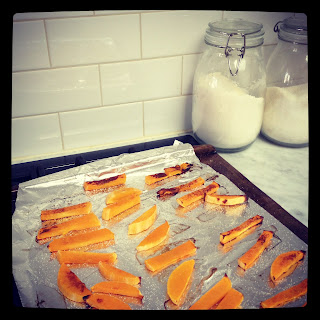 (Baked squash fries: Squash + salt.)
So I start using the knife and I call Jon at work to say:
"Hey, sorry, but I had to use your knife." " I mean, you don't want me to HURT myself on a dull knife do you!?"
I was a little dramatic, it kind of felt good. I was implying something like, you snooze with returns, you lose. (You have to understand where all this pent up, passive-aggressive kitchen utensil usage comes from. Procrastination is a looooong standing topic in our marriage.)
Ok, here's the karma part:
Not more than TWO MINUTES after that phone call, what do I do? What do I do!? Accidentally cut part of my FINGERNAIL and finger skin off with the new knife OF COURSE!
Then, THEN I burn my other finger on a pan, not ten minutes after that!
Oooooooooooooh. And karma, you're not done. Not yet. So that nasty episode was at lunch today. Tonight at dinner, uh huh, yep. I accidentally slice my finger, AGAIN.
Jon tells me that the only reason people accidentally cut themselves when using knives, is because they're thinking about something else and not paying attention.
Um. Bingo? Ok, I'm sorry! I just re-installed the Instagram App to my phone and I was imagining the composition of an artsy-fartsy picture of the strawberry salad I was making.
And would you believe it, all for nothing I tell you. I ate the salad before I even remembered to snap a picture of it. Damn.
Karma's a b...... Wait, I mean, Karma! I love you! Karma's a b-best....thing eva! ....yeah.... 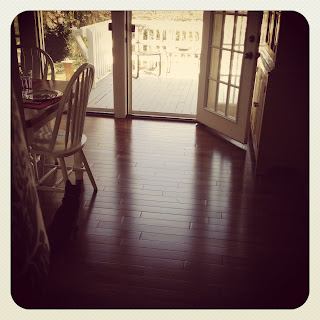 Want my two cents on knives? I'm no expert - clearly - but our knives were a gift from my dad, who is indeed an expert. He very definitely is not a fan of all the high-end consumer knives.
He bought us a set of F. Dick knives, which they use in all their commercial kitchens. They're well-balanced, exceptionally durable, and ours have held up exceptionally well after 13 years.