The Evolution of Play 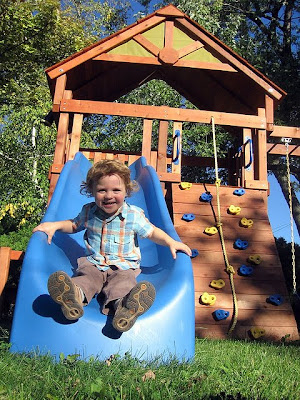 As Noah has gotten older, I've been moved to think more about play and the roll it, ehem, PLAYS (oh hahah) in children's lives. Far from perfect or perfectly formed, I do have some ideas and observations that I've been wanting to share about the state of play today, and the big changes play has gone through in just one generation!
"Go outside and play" was one of those quintessential "Mom phrases", along with "Clean your room" and "Eat your broccoli". I've been told all three, NUMEROUS times in my day. Oddly, I don't have to tell Noah to clean his room or eat his broccoli because one, the universe has blessed me with a pint-sized neat freak, and two, the kid likes broccoli! The "Go outside and play" line though, that one, I say it a lot, and results don't come easily.

Play, inside or outside, using imagination or using technology, each version has its merits. I'm just struck with how differently kids play these days, from my time as a child. There is a whole new set of play expectations, possibilities and etiquette, and I don't know if these changes are all that great. 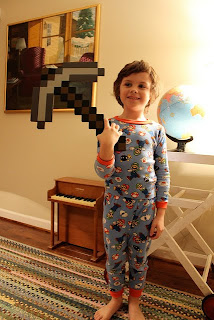 (Minecraft magnets. Yo boy, turn that raw material into something fine! NOT electronic.) 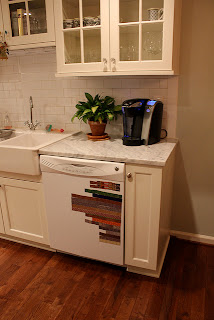 Electronics get a bad wrap, and I can truly understand why, but what do you do with a kid, who's honest interests rest in computers let's say? Surely I can unplug the electronics and send him outside. I can make him earn "technology time" by putting in "imaginative or creative" play time. Is this the way to go? What do you do in your home?
I used to spend hours and hours as a child, drawing pictures in my room. That's what I was interested in. I developed a skill. If I was wanting to spend hours and hours on the computer though, I have to think that wouldn't have been as ok. But.......when Noah is on the computer, on Minecraft, he is creating, like I was creating a drawing. So, is it ok to let him indulged? Or, would that be bad parenting?
(Wait! What do we have here? It's a Minecraft inspired DRAWING! This is a "Steve Puppet" that Noah came up with. Steve is his character in Minecraft. It counts as both electronic and non-electronic play. Mind boggling.)

I feel as though I've almost talked enough, no, too much about play tonight. I'll leave you with one little thing about a fun toy that might inspire the guy or girl in your life too!
For whatever reason, Noah really never got into most of the usual, popular boy things for each age and stage that he has gone through so far. Instead of Star Wars, Super Heroes, Transformers and team sports, he liked letters, numbers, chess, computers and Minecraft. Not your most exciting blend over the years (Thomas the Tank was a much welcomed sight.), but it was his thing, and I respect that.

The ABC's.....Well, sort of. from How Bourgeois on Vimeo.

This is why I was very surprised and intrigued when Noah came home from school one day this fall and announced that he was "into Harry Potter now"!

Great I thought, this is good. Anything is good compared to his all consuming obsession with Minecraft. He began reading through the series. And reading, as you all know, is NOT technology. Score!
Then though, we a made a mistake. A big mistake. :(
Ok, so we let him watch the first MOVIE. Yep. What were we thinking? Then of course, the MOVIE became WAY MORE exciting than the BOOKS. So he got to the point where he only wanted to watch the movies, not read the books.
Sigh....
Why did we do that? I should have known better.
Anyhow, then something kind of good came out of all of this. It was Noah's birthday, and I thought he might like some Harry Potter Legos. Being Noah, of course, he never went with the flow and whole heartedly embraced the young boy Lego craze. So I saw this as an opportunity to get him both back on track with non-electronic Harry Potter AND into Lego play, which is creative play!
When my Mom asked what he wanted for his birthday, I meant to send her THIS link. But, I accidentally sent her THIS link. Oops! Sorry Mom. It was a huge hit and a huge Lego Hogwarts. It also sparked what seems to be a long-term love for Legos and many an hour playing and making up lego adventure WITHOUT a television or computer in sight!
For Valentine's Day, my Dad sent Noah THIS Lego Harry Potter "Hagrid's Hut". I found it to be incredibly adorable with it's little Lego pumpkins and little Lego mushrooms. It seem to be one of their most well done kits. Not too expensive and too massive that it takes up a whole corner of the room. If you're looking for a cute one with lots of tiny details, this is it. 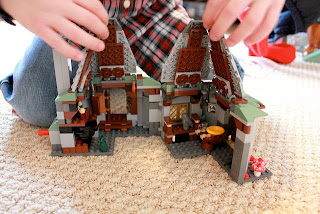 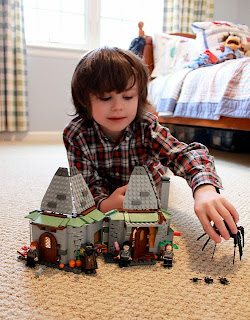 This is a terrific post, Lauren! One of the most important things we can do as a parent is trust our instincts on what our and our child's needs truly are. Different types of play, activities, and the amount of those activities solely depends on that child, parent, and family. Comparisons are useless!

Hey there, thanks!!! I really appreciate your input and support. That sounds good, I'm going to trust my instinct and try to stop second guessing so much.

And thanks again for the playdate. Lol.
I meant it. I was just complaining about over-scheduled childhood in general, not individual get-togethers. Those are fun! ;)
xoxox

Moments I will never forget said...