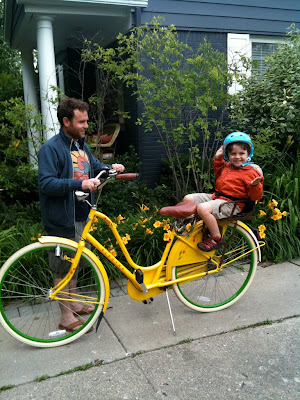 I pine away for simpler times. For a phone that's stuck to the wall, and rings but twice a day.
The only mail that begs for my attention, comes in paper form and not on Sundays.
Today I heard on the radio, that Johnny Dep gave a recent interview in which he said that he doesn't like phones, doesn't own a cell phone, doesn't like being "reachable". The radio announcer remarked "Isn't that bizarre?", but I just thought Johnny is the luckiest duck in the world.
I'm really enjoying this little blog, about a woman in the Gloucester countryside who decided to only shop local. It has inspired me. Someday, I hope sooner than later, when we move, I shall also try to only shop local for the most part, but upon my bike. We're determined to move when the time is right, a bit closer to downtown. Right now we're 1.3 miles from the center of town. I walk there often, but I'd far prefer to be right in the middle of things.
I want to bike and visit the market daily, and cook all of our food and sew clothes and craft gifts and paint pictures and restore an old old house. I want a slow life, and all I need is to move, finish my volunteer obligations and unplug the phone. I'm going to do it. Someday.
at December 08, 2010

Oh I pine for a slower life, too! We are sincerely hoping to have that in Grand Ledge....its a small town...near Lansing, and close to the mall and a Meijer grocery....but the downtown area is quaint, and the house we will be living in is right on the river, next to a farmer's field, and on a dirt lane....ahhh...slower life...yes, that's perfect. And a bonus, there's a clothesline! Those are not allowed in our Canton neighborhood! I pray you get the slower life you crave...come visit me and share mine on occasion.