Today was a lovely day, regardless of the fact that we didn't do much. That was probably the reason today was so great! We've been having these unnaturally long, drawn out, chaotic, busy monstrous weekdays, followed by equally demanding weekends. It's all so draining, and this quiet weekend is such a treat! The only bad thing is a terrible sinus headache that has parked and is hovering right above my left eye as we speak. Ouch! I attribute his arrival due to the weather change, a big old winter storm rolling in from the west.
Hurray! There is almost nothing better than a soft, fluffy, first blanket of snow. We've bought a big cord of wood and there's hot chocolate in the cupboard.
This Morning we all got up early. Noah before 7:30, and I shortly after. Jon had to go and work a bit today, so we got ready, ate a hot breakfast and straightened the house quite quickly for a Saturday. After Jon left for his meeting, I put my makeup on and curled my hair, while Noah snuggled up on our bed and watched some Hard Day's Night. I love the fact that he can appreciate the Beatles too. We were laughing over this scene:
After getting ready, Noah and I ran to Target (Yes, AGAIN.) for a few things. One item on my list was a lip stain that I saw advertised in my most recent Lucky Magazine. It was a*Maybelline Sensational Lip Stain.
I swear, I usually don't do this, marketing has no power over me! Well, maaaaybe once in a while. ;)
For some reason, I felt like it was time for a new lip color. Ironically by the way, the model in the advertisement is Sean Lennon's girlfriend, which has nothing to do with anything, other than I was just talking about A Hard Day's Night.

Anyway, originally I went in for "Wink of Pink", but ended up seeing the tubes in person, and opted for "Feelin' Rosy". I think it might have been better to have stuck with my original thought. The Feelin' Rosy lip stain is very nice. It totally reminds me of my old favorite, Benefit Cosmetic's Benetint, only less expensive! The only thing is, the color does not come out looking anything like the tube, even when sparingly applied. It's quite a bit more red and opaque than one would expect. Still very pretty, and recommended. I bet mixing it with other glosses or even lipsticks would be nice.
These days I feel guilty and uneasy when I don't buy more natural beauty products. I've tried to stay as chemical free as possible. It's just quite hard to find what I am looking for, especially in makeup and most of all, it's expensive! I go through periods of being very good and granola and other times when I feel like I must pick and choose. What is a girl to do?
Tangent!
You know, I thought this post was going to be a very short, quick and easy post. Like a journal entry. Alas no. What is wrong with me? I talk too much, never a woman of few words.
After Target, Noah and I went over to the library to return some books, and check new ones out. Only he fell asleep on the way, so instead of waking him, I did the drive-up book drop. Thank you universe, for the drive up book drop.
He woke up shortly after, and since we were on my parent's side of town, I stopped by to see their new Christmas tree. Noah and I arrived just in time to help put the tree into the stand. They asked me to eye it, and tell them when it was straight. That was nerve wracking. So much rested on my shoulders! At one point the tree scratched the ceiling. The small mark really bothered Noah, so Papa hoisted him up to clean the scratch. 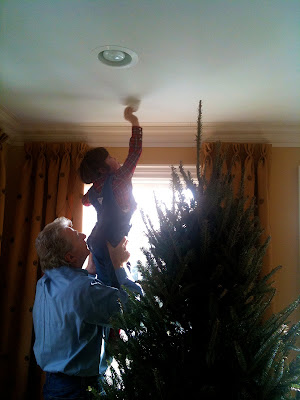 My parents gave us some wonderfully smelling Christmas tree clippings, the branches at the bottom that needed to be trimmed. I'll put them out front, to decorate my porch.
Around that time Jon finished up with his meeting, and came to meet Noah and I at my parents house. We decided to go to lunch, and since he was behaving so well today, Noah was given the chance to choose where. He immediately shouted "Panera!", so off we went. After lunch in town we passed The Cupcake Station. It was two for the price of one day! Noah refused to eat anything with frosting. He's crazy. I chose a Boston Cream, and Jon a Caramel Mocha Latte cupcake. Oh my gosh, SO good!

Then we went home, and stayed home. Some packages arrived. Two of them were Noah's late Hanukkah/early Christmas gifts from his Grandpa Scott! Noah went just crazy with joy! Two Wii games, A Boy and His Blob and Super Mario Galaxy 2. He was THRILLED! My Dad is in China working, so we'll have to Skype him tomorrow.
We all sat around, read while Noah played, watched a little bit of a movie, and eventually had some dinner. Jon wanted to cook, so we had some delicious portobello soup, mushroom risotto, peas and fruit. A perfect cold weather meal. Thanks Jon!
Some more sitting around and reading and writing. Some hot chocolate, a bed time story, and now here I am, typing this!
I would say a lovely day indeed. :)
*By the way, I was not asked or paid to review any product in this post.
at December 11, 2010

nice blog, my daughter was born on the same date. i like ur blog and your grey hair too. we can get connected at www.facebook.com/veerendra.shinde
also
bye keep writing