Tomorrow is Dr. Martin Luther King Jr's birthday.  Noah's school is so incredibly wonderful, it's a place that puts emphasis on diversity, differences and the courage of those who dared to stand up peace and equality.  In addition to celebrating Dr. King's birthday tomorrow with a school-wide celebration lead by the children, they are also hosting an event on MLK day, this coming Monday.  First it will be a day of service,children and their families, packing up meals for those less fortunate. After that, we will all share a simple meal of soup and bread together, and focus on the importance of community. Then we'll hear speeches from staff and students on the value of human rights and tolerance, followed by a candle light march, and culminating in short, poignant gathering where we'll sing and remember the great teachings of Dr. Martin Luther King Jr.   Dr. King taught us that you CAN make a difference, that you don't have to surrender to the oppressors. He helps me to keep hope that some day, those in the LBGT community will also have the same civil rights, and universal human dignity as we do, just like Dr. King hoped so many years ago!
One exciting thing this year, is that I was hired by the school to shoot the whole event on Monday! So hopefully, we'll have some nice pictures to see soon!
I was moved with what I have seen and heard from the children so far, as they prepare for tomorrow's celebration. The following is Noah's take on MLK's and Rosa Park's stories. (Although his story made more sense when he told me the first time. Of course without the camera rolling. Go figure.)
I also wanted to share these pictures that I saw hanging in the halls today. They were done by some of the preschoolers. It's so exciting that even children as young as three and four are learning lessons in hope and empathy. 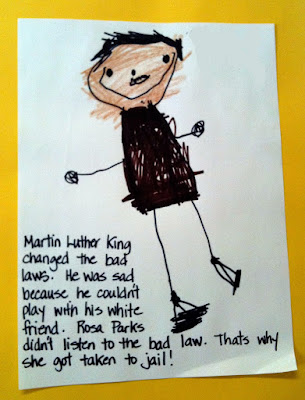 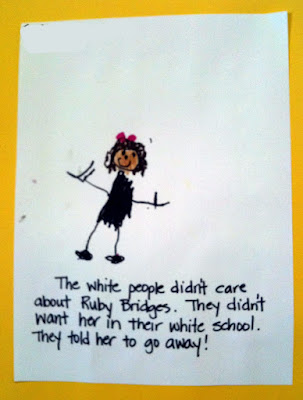 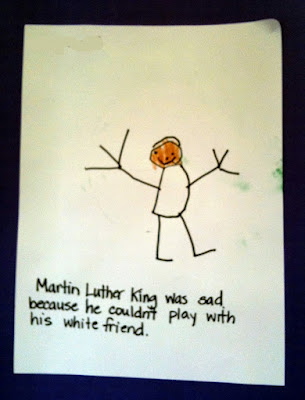 So let's take a cue from the kids, and make sure to stop and think about the great Martin Luther King, and what he taught us about hope, perseverance and love.
Peace!
at January 14, 2010

Isn't it somehwat odd that the painted Mr. King has a huge smile on his face while he is prohibited from playing with his white friend? Just a thought.

No, they're 3 & 4 years old, a small over sight , or perhaps their Dr. King is happy because he knows better times are coming. They're just little kiddos, and I still think their pictures and words are great!