Just another one of those " for posterity's sake" posts 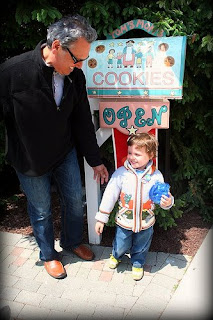 Today I was talking on the phone with my Mom. Since she is Noah's Grandmother, my Mom naturally eats up every little cute pronouncement that comes out of his mouth. (Ok, so do I.) You know, Grandparents are good like that. So, when Noah makes a note worthy statement, I usually end up calling at least one eager Grandparent to share it with.

Last night's Noah light bulb moment was something that I thought Papa would particularly find interesting, so I called him, and in turn, ended up also telling my Mother. She asked me if I was writing these things down and reluctantly I admitted that the baby book, well, it never really got off the ground. I did say that this is what How Bourgeois was started for though, a multi-media kind of baby book. Someday, we'll print it all off and have it bound for Noah.
So anyway, I promised her that I would type out and post for posterity his latest Noah-ism, which you may, and much more likely may not, even care to read about.

Last night we were eating dinner on the back patio, when out of the blue.....

NOAH: "Hey, I want to tell you something; (pointing) that's North, that's South,
that's East and that's West! Did you know that north, south, east and west are another way of saying left, right, forward and backwards?"

He continues to amaze me with the things that he says. I loved the explanation of the comma. I, for one, like to read about the Noah-isms...makes me feel like I know him, a little bit.