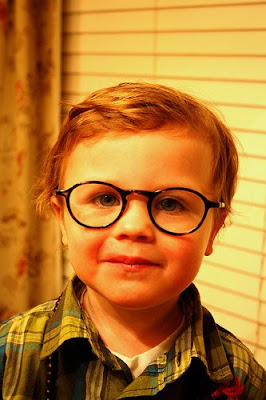 A pair of glasses might be in Noah's near future. It started last November when his pediatrician suggested that I take Noah in for a eye exam. She just wanted a screening to look for any signs of strabismus, a sometimes inherited eye muscle disorder that I was diagnosed with at three years old, along with being far sighted. Back then, Noah's eyes seemed completely normal, but I called for an appointment anyway with the pediatric opthamologist. New patients were being booked two months out, and for some reason which now escapes me, I had to cancel our appointment several weeks before hand and had completely forgoten to call back and reschedule. Recently I began to notice in pictures that maybe....just maybe, one of Noah's eyes was sometimes not in sync with the other. It seemed to turn more inward. Was I imagining it? Jon didn't even really know. It was infrequent and so subtle, never obvious. Then this past week, one afternoon Noah was very tired and all of the sudden, momentarily, one of his eyes really seemed to be turning in! It was a little scary. My mother said that she noticed my eye crossing when I was tired, too tired to focus. So, the very next day I called the opthamologist and got an appointment. I told the receptionist our story and she was able to get us in, in two weeks.
Maybe this is nothing, maybe I'm imagining it. If Noah really does have a touch of strabismus, then most likely he will be given glasses and an eye patch to wear for a while. Oh gosh, the patch...I remember that.
One thing I know for sure though, if he is prescribed glasses, Noah sure does looks handsome in them!
I'll keep you posted.
at September 13, 2008

Cara has the same combination...farsightedness mixed with strabismus. She wears glasses, when she'll keep them on and went through a bout with the disposable eye patches. Let's just say they didn't work too well and we are now trying drops, which she has learned to blink out. I hope that if Noah has strabismus, that he's better about wearing his glasses and patch than Cara is. Since he's a year older (plus way more in maturity, IMO), you should be good to go.

Uh... so, totally not in the spirit of the post -- so forgive me -- but I am TOTALLY buying Noah a red rider BB gun for Chrismahanukwanzamas... seriously...

Hi Laura!
That's right, Cara does have my ame combo, huh? I'm sorry that it's been a challenge to keep the glasses/patches and drops on and/or in. That sounds difficult. I do remember not liking the patch at all. Cara is so young though, I can understand why that would be so hard at this stage. Heh, thanks for the maturity comment but I'm not too sure about that! :) No, Noah is pretty good at doing what he is told. So, if it does come to glasses, I do expect lost of complaining but I have my fingers crossed with the other part. Thanks so much for the input, I have always though that Cara looks absolutely gorgeous and ADORABLE in her little glasses. :)

Nate! It's funny you say that, because the title of this picture on Flickr is "Ralphie" or something to this extent. I appreciate the Chrismahanukwanzamas generosity, but you are forgetting that my dear son is a huge pacifist, a big major one. No guns for this Peaceful Perry. Please note his gorgeous strand of Buddhist maala beads, so zen this boy is. OMG! Maybe he's an Indigo Child!!!!?????