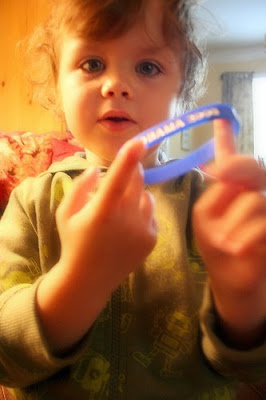 Perfect vision!? Perfect vision! So Noah and I just got back from his eye appointment. He was so utterly excited because he thought this meant another cool pair of sunglasses. The appointment started off well with Noah asking for the alphabet chart. The doctor was surprised that a little guy would be ready for and demanding the alpha chart, instead of the kid's chart, (although don't most kids his age know the alphabet?), but was even more impressed when he raced through the whole thing. It was almost like he thought it was a time trial. She couldn't switch the letters on the screen fast enough. Kind of funny since Noah missed the purpose completely, they're not measuring speed here kid. Anyway, his sight was perfect, no color blindness either. That's when we moved to the eye drops. Oh man, it was bad. I swear, screaming and crying more loudly than I have ever heard. I had to restrain him, it was SO sad. Noah was terrified and I felt just terrible for him. We tried to convince Noah that they don't hurt, it just surprises you a little. No use, he's an intense guy. The crying stopped eventually and after a half hour, we were back in for the final half of the exam.

Bottom line, no, Noah did not inherit strabismus from me. The doctor reassured me that we were not crazy and that indeed, sometimes his eyes do give the illusion of not being in sync, but that is because of the structure of his face, and it's completely normal and harmless. You see, Noah has a wide bridge of his nose. This is something that most children have, but out grow by age three. A wide bridge can make the eyes appear to slightly cross from some angles and often in pictures. He just has a baby face still, that's all! Also, Noah has folds in his eyelids that even fold in the middle corners, which can also at times give the appearance of an eye turning in.
He will out grown his young looking face at some point, everything is normal!

On another, doctor visit point, we also saw his pediatrician yesterday. Noah was sent home from school for "Just not seeming himself" yesterday. It sounded like he had a cold and his voice was muffled, so I took him in. It turns out nothing too bad, just a cold/sinus thing with the beginnings of an ear infection. He feels much much better today and I think Noah will be 100% soon. I did ask them to please weigh and measure him, as there had been a tiny bit of concern in the past about his slow growth. I know I've blogged about it here before......
Good news! So far, so good this year! The minimum that the doctors want a child to grow in a year is 2", and Noah has grown 2 & 1/4 so far this year, he's also back on the growth chart, and in the 5th percentile for height. I know that's not much, but it's great that he is back on the curve! 34lbs. and 37 &1/4" ..........My baby guy is getting big!
at September 26, 2008

WHOO HOO! Good news all the way around!

PS I like the video you put up as well...hahaha!