Noah's at school, my errand is done, phone call made, and now all I have to do is figure out dinner and get to the grocery store before school lets out. Here's the problem, it's been nearly impossible find a meal that everyone enjoys and most of all, is willing to eat!
Noah: Except for a few bites of chicken, he will not touch any meat or fish. 98% of the time, he won't eat something that has more than one color or texture in it, or ingredients touching. The kid lives off of pasta, yogurt, milk, cereal and said chicken bites.

Me: I am essentially a vegetarian. I will very reluctantly eat chicken at times (NO! I don't talk about not liking meat in front of Noah. ) I have started eating chicken with Noah in order to encourage him, but try to eat it only once a week or less,.... I coyly go for the grilled veggies on the plate. Other than the no-meat thing, I eat everything else minus peanut butter. Also, I'm still on Weight Watchers, coming up on the 25lbs. lost mark! I don't want to screw this up now, I need healthy dinners, and it's good for the whole family too. We all love pasta, but I need to really steer clear of it.

Jon: Will eat anything, except the veggie burgers, or veggie meat or quorn things that I have made. He says that he can tell it's not meat in the meatless sloppy Joes, or meatless tacos. I don't believe him, but it doesn't matter anyway because Noah won't touch any of it with a ten foot pole.
I feel guilty that I don't make Jon meat at dinner very often, but he seems to find some at lunch most days. 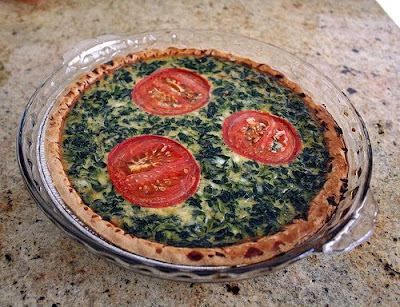 Update: All this posting about omelets got me in the mood for eggs, so I made a quiche. A spinach and cheese quiche to be exact, from a Weight Watchers cookbook. It was a hit!......for two of us at least. Four thumbs up from Jon and I. And you can now strike eggs off the list of foods that Noah will ingest. First he asked us to take the quiche out of the crust, and then he refused to eat pieces with egg in it. Ha, pieces without egg?! Now he is sitting across the table from me weeping.
Update #2: Wait, I just told Noah that I put LOTS of creamy butter on his piece (No, I didn't) and now he is smiling and eating the quiche filling. Way to go Mom!
at September 22, 2008

we grill shish kebobs at least once every week. it works for our veg/non veg household as we buy boneless skinless chicken breast as well as yellow squash, zucchini, cherry tomatoes, onions, mushrooms and potatoes. surprisingly, potatoes are great on a kebob.

we eat it with hommous.

since they come apart easily the kids love them, too. hopefully that would work for noah?

also, thanks for the kind words about the blog and the award... i'm getting around to it!

Sarah says I'm a hardass... but... I would suggest making what you're going to make. If Noah don't like it... that's fine. But it's what's for dinner... I suspect that after a couple days, the pickiness will disappear...

Regarding Jon... I hated meat substitutes until I decided to consider them their own food type... TVP doesn't taste like real beef... but neither does ground turkey. Turkey is Turkey... Beef is Beef... and TVP is TVP. If you view it as a separate and equally valid type of food that should be enjoyed in its own right... not based on how closely it mirrors another food... it's much more palatable... to me anyway.

Restaurants. and lots of them.

Sorry, I'm living with three men who eat us out of house and home on a daily basis. Our food bill is astronomical.

Hey, thanks for all of the advice you guys!

Meagan- It's funny you say that because yes, grilled chicken shish kebobs are our only fail-safe meal. Noah will eat a chicken chunk or two and I get all the veg. I want. Oh and Jon gets some meat!
We have already said that we must keep the grill going through winter, what would we do without this meal!? Thanks Meagan. :)
xoxoxox
P.S. I keep meaning to comment, but I love what you did with the kid's bathroom walls! So neat!

Nate...nate! I called your wife today to be all like..."omg! your husband left me a very constructive, helpful and non-snarky comment!" There was no answer, but I will be sure to tell Sarah that I liked your comment soon.
Ok, so yes, I do think that in an ideal world, it is good to tell your children: "Look, this is what I made, this is what you get tonight." A lot of the time, most times, Noah only gets one meal, but for us, sometimes we need to encourage his eating. Because Noah hasn't grown much in the past year, I worry about his nutrition, so if he doesn't eat much dinner, sometimes...we follow up with cereal or yogurt or cheese, etc...
Your comment on viewing meat alternatives was brilliant! My friend in Ohio even called this afternoon to say so! I couldn't agree more. I will keep at it, trying to find at least one meat alternative meal that Jon likes. I'll pass your comment along to him though.

Jeremy-Ha! I couldn't stop laughing, but um...not so veggie, not too healthy. Although, they are basically one color. You score points with Noah.

Judy- oh my, I can only imagine. Noah doesn't eat and Jon eats like a bird at home, so we don't have the same problem. Although.....I love going out to eat..TOO MUCH! It's really fun. My favs are Indian and Ethiopian, so you can only guess how much Noah loves those places! He does say, supposedly he says, that he likes sushi, so that's good. A place where all three of us can eat is limited. So far, any Japanese restaurant with noodle bowls, Coney Islands ...
Wait, this is so long. Thanks Judy, I'll go out tomorrow!
xoxox

I tend to go with Nate on the part that if you make a dish, make him eat it thing...we do that with our girls.
Know what works really well when they don't want to eat? Scott sets the egg timer, and tell them if they haven't eaten so many bites by the time the "bell" rings, they don't get a movie, or play-time or whatever.
Works REALLY well with Kelsey, our drama queen.

Boy, I know how you feel Lauren. Caitlin doesn't like most vegetables (tomatoes, lettuce, carrots and corn is all), eggs or cheese. She can usually find some excuse to not eat other things too. Thankfully, she loves fruits and most meats. I have had to get pretty creative with my dinners in order to get the her to eat. But, while I try to make something that appeals to everyone, I don't go overboard and I don't make more than one meal unless we're having leftovers or something. Cara is just about as bad. I can't figure out what she likes and dislikes as it seems to change from one day to the next. Ben & I will eat just about anything, so that's not an issue...it's the girls. I have a few tried & true recipes that I can get everyone to eat & enjoy, thankfully. One rule in our house is that Caitlin must try at least one bite of everything on her plate or she doesn't get dessert or anything more of what she does like.

Gosh, sorry this is long...