I went to services today for Rosh Hashanah. I still am not entirely used to the Reform service, because parts of it are more like the H.M.S. Pinafore than prayers for the holiest time of the Jewish year, especially when the cantor and the choir are going at the same time. Add in the musical accompanyment and it is totally unlike the long, somber Conservative services I grew up with, which, to their credit, did reinforce Hebrew language reading and pronunciation, if not comprehension. My preference would be for more Hebrew, more congragational participation and less organ music in the Reform service, but it does sound beautiful, and I can see how if you went to services twice a year you would feel that you're getting your money's worth. If you go more often, something a little more engaging is needed.

To celebrate the holiday via fork, after Noah went to sleep tonight I made a potato kugel. A kugel is a traditional baked dish served by Jews of European descent, often to accompany festive meals. They can be sweet (like noodle kugel, with cottage cheese and cinnamon and raisins) or savory (like this potato kugel), and my Bubby's are the best there are, period. Mine doesn't even compare, but I take comfort in the fact that no one's does. 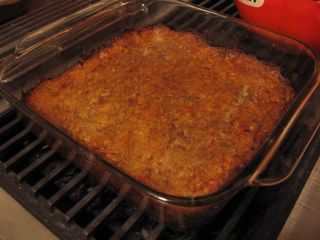 I used Joan Nathan's recipe for potato kugel from her holiday cookbook, with decent results considering I don't cook with chicken fat, for health and digestive reasons. I think this is nice-looking, and it tastes good if you have never had Bubby's. If you have, you'd know I have a lot to learn about kugel. On analysis, this needed an extra egg and I should have used Crisco instead of liquid vegetable oil, and more salt. It does, however, beat having no kugel. 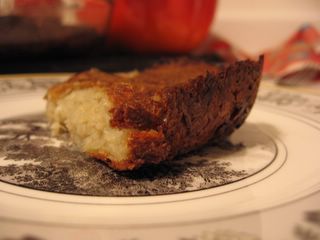 To many, the crust is the highlight of the potato kugel in both taste and texture, which is why corner pieces, having the highest crust:interior ratio, are highly prized. In some families you need to be very quick to snag a corner. A circular kugel solves this problem but is not as much fun, because part of the joy of getting a corner piece is that there are only four of them.

So Happy New Year! A sweet and healthy new year to our readers and their families. L'Shana Tova eveyone.
at October 04, 2005

Happy New Year to you guys! Thought about you all when I saw what day it was on my calendar!

Wow...that looks like some good kugel! I've never had ANY kugel...but I've read a bout it and always wanted to try it. :)