A Perfect Kind of Saturday

I've been meaning to finish this post since last last-last Saturday.  I'm kind of slow with the turn around, but better late than never! The Saturday before last was just one of those really nice, really relaxing days. It was great, even in the middle of a freezing, snowy winter! So for posterity's sake, here are some snaps from that day ........

Ok, I'm already kind of messing this post up, because this first picture is from last-last FRIDAY. But, it was so pretty to see in person, that I just had to take a photograph and I really wanted to share it.
I woke up that Friday morning to new fallen snow. It was gorgeous! Then, out in the distance, over the trees and beyond the ravine, I saw smoke billowing up from somebody's chimney. The sunrise was casting just one spot of warm sunshine and contrasted again the blue sky. It was AMAZING. So I ran to take a picture. Isn't it beautiful!? 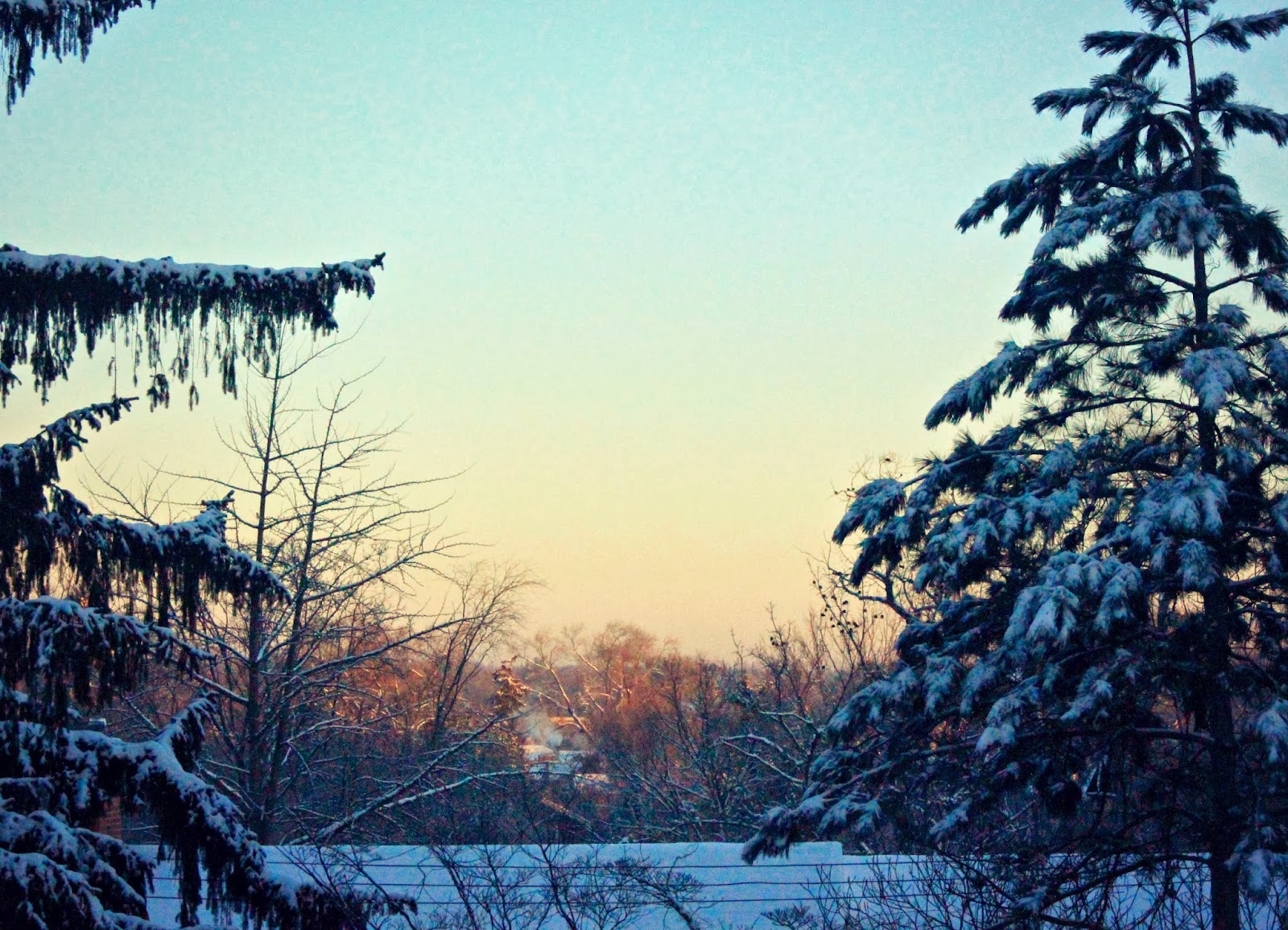 So yes, we've had a lot of snow so far this winter. A LOT. This handy, little info graphic from The Detroit Free Press says that we're up to 67.9 inches! That's almost 5'8" worth of snow! We've broken records with the cold too. Ever hear me talk about the polar vortex!? (I know, I won't stop going on about it. Sorry).  It's amazing how many days we've had with the wind-chill far below zero, and how many days we've had off school due to weather since the beginning of January.

People are going to hate me for saying this.....(please don't hate me) ....... but apart from the dangerous temperatures to human and animals and the treacherous driving, and the sad feeling I have for people who are unable to shovel their drives or get around easily......apart from those difficult things, I actually love a snowy Michigan winter. These are the winters of my childhood! This is what Michigan winters are supposed to be like! If you live in the north, you might as well have a good old-fashioned, classic winter, you know! I don't mind all of this, I actually find it a little exciting. 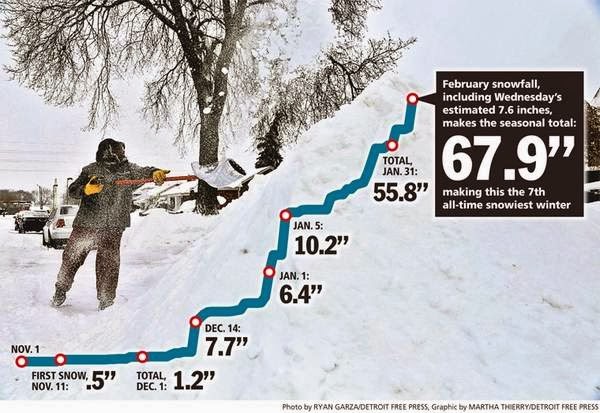 You really can't tell just how high the pile of snow is from this photo. The tall parts at the end are just about five feet tall! I call this the Lauren S. International Peace Noise Berm. (I know that makes no sense). The noise berm that I've been building since January works PERFECTLY to filter out traffic sounds. The only thing is, you still hear the drunk people as they walk past when the bars let out at 2:00am. Don't touch my noise berm!  ;) 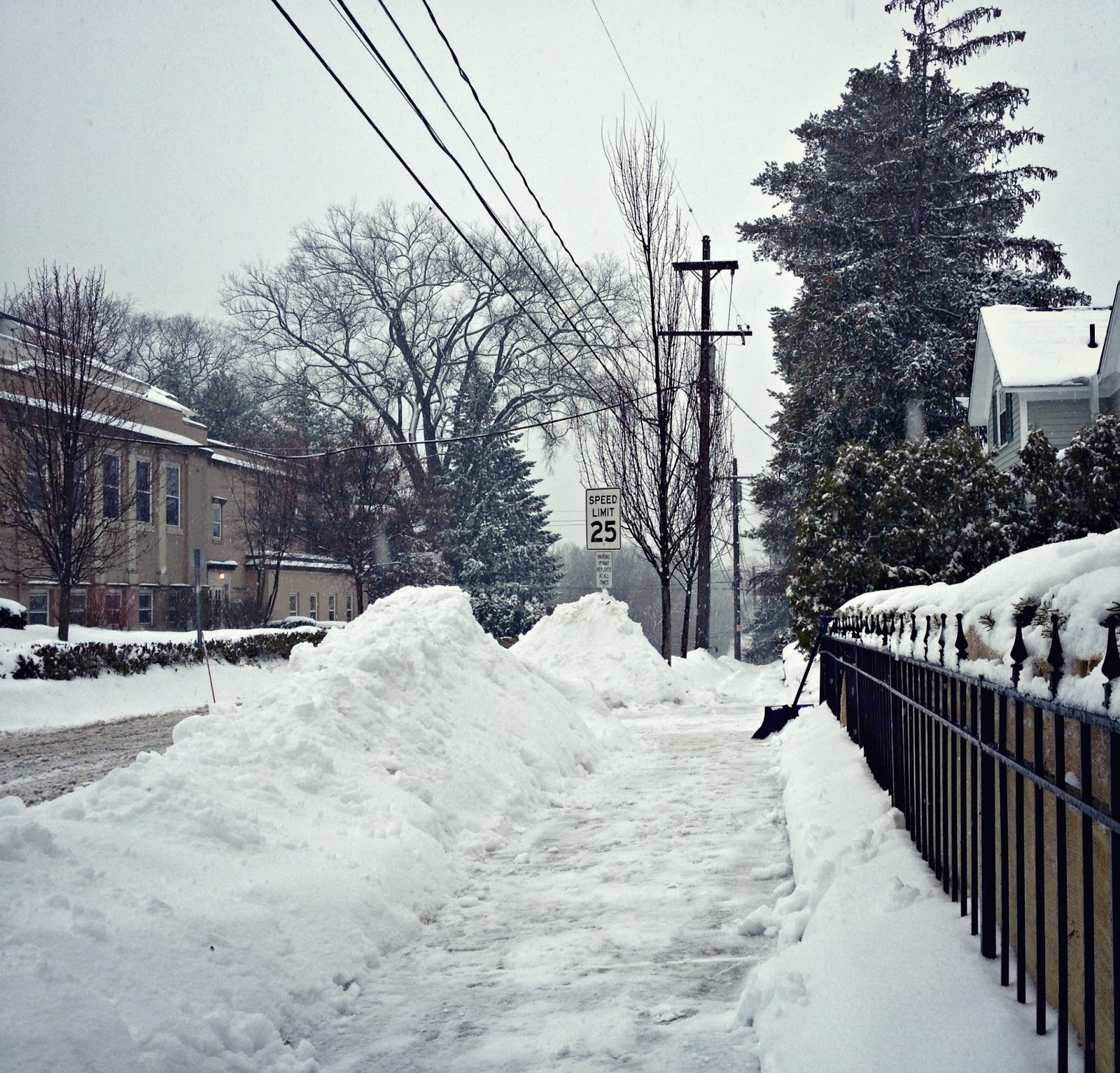 Other than snow, another big topic around here has been Valentine's Day. I lament the fact that we were married on Valentine's Day. We didn't want to be married on that day, but due to many factors that I don't want to get into here.... we ended up being married on Valentine's Day. My whole life I dreamt of getting married in the beautiful fall. Not the winter, not on Valentine's Day. Also, it's most difficult night to get dinner reservations and babysitters. I know it is not the wedding or the anniversary, it's the life together. I try to remind myself of that.  Next Friday is our 10th wedding anniversary! I feel very happy about that, and excited. TEN!  Every year I make a few valentine's decorations in honor of the holiday and our anniversary. This year, instead of buying more card stock paper, I decided to use up what I have in reds and pinks and purples. Just simple hearts, but the over-all effect is pretty cute.  (I couldn't bear to take down my paper snowman from January. It's still too snowy. He looks just fine in the window)! 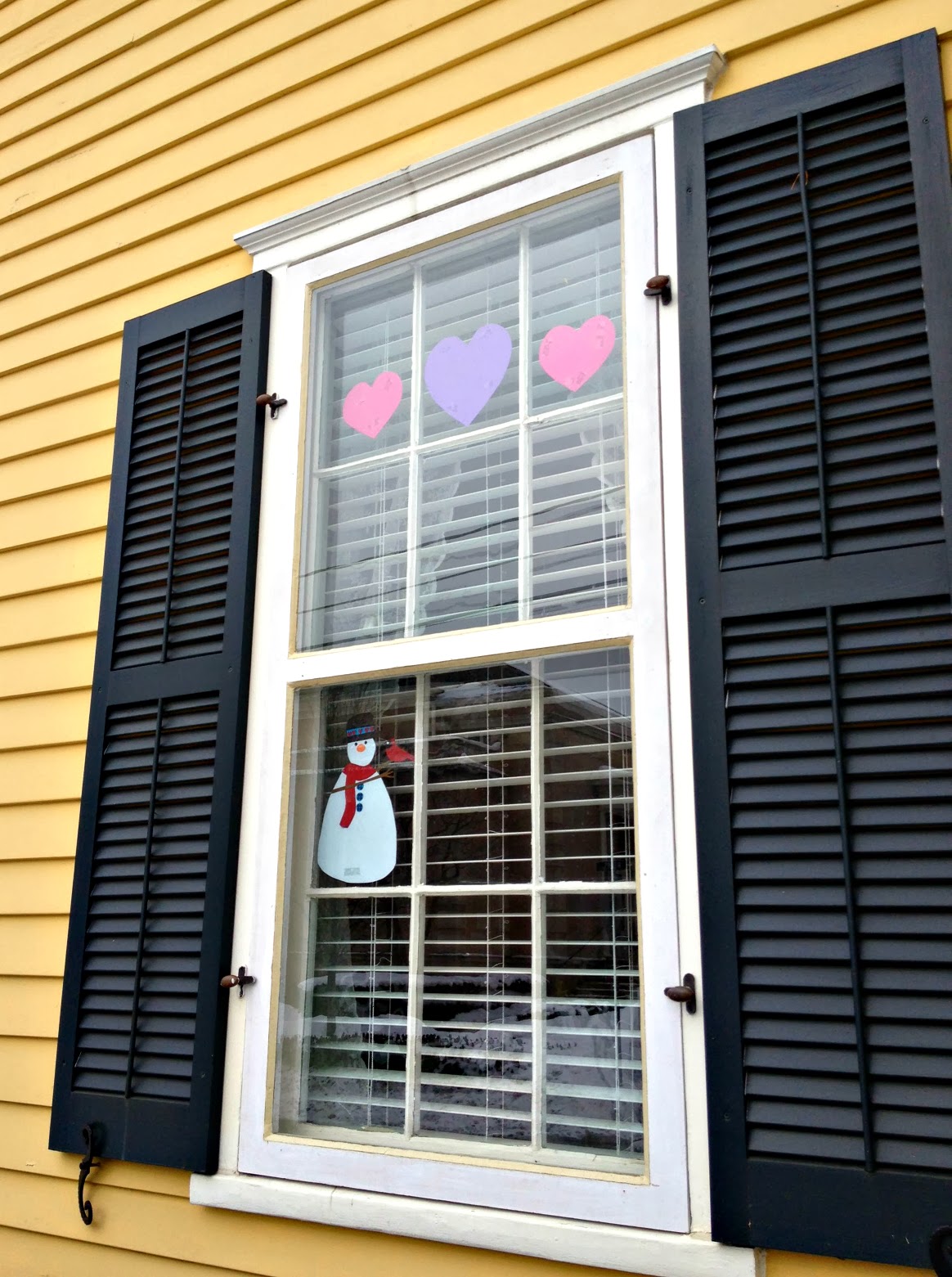 Oh my gosh, I completely STARTED this entire post with a tangent.  Is that even possible? This is supposed to be about last Saturday, not about the view out one's window or about snow and complaining about one's wedding date. So sorry, where was I? Yes, Saturday. Last-last Saturday was such a lovely day. It was relaxing and low-key, but fun. Just like I like them! We had a nice hot breakfast with homemade cinnamon rolls and then went out to shovel. Shoveling is fun around here because for one, our driveway is short, so it's easy, but two, lots and lots of people walk by. It's never boring or lonely. We always have a nice time saying "hello" to neighbors or meeting new friends. And Noah is always happy to have any new accumulation to build up his snow fort. 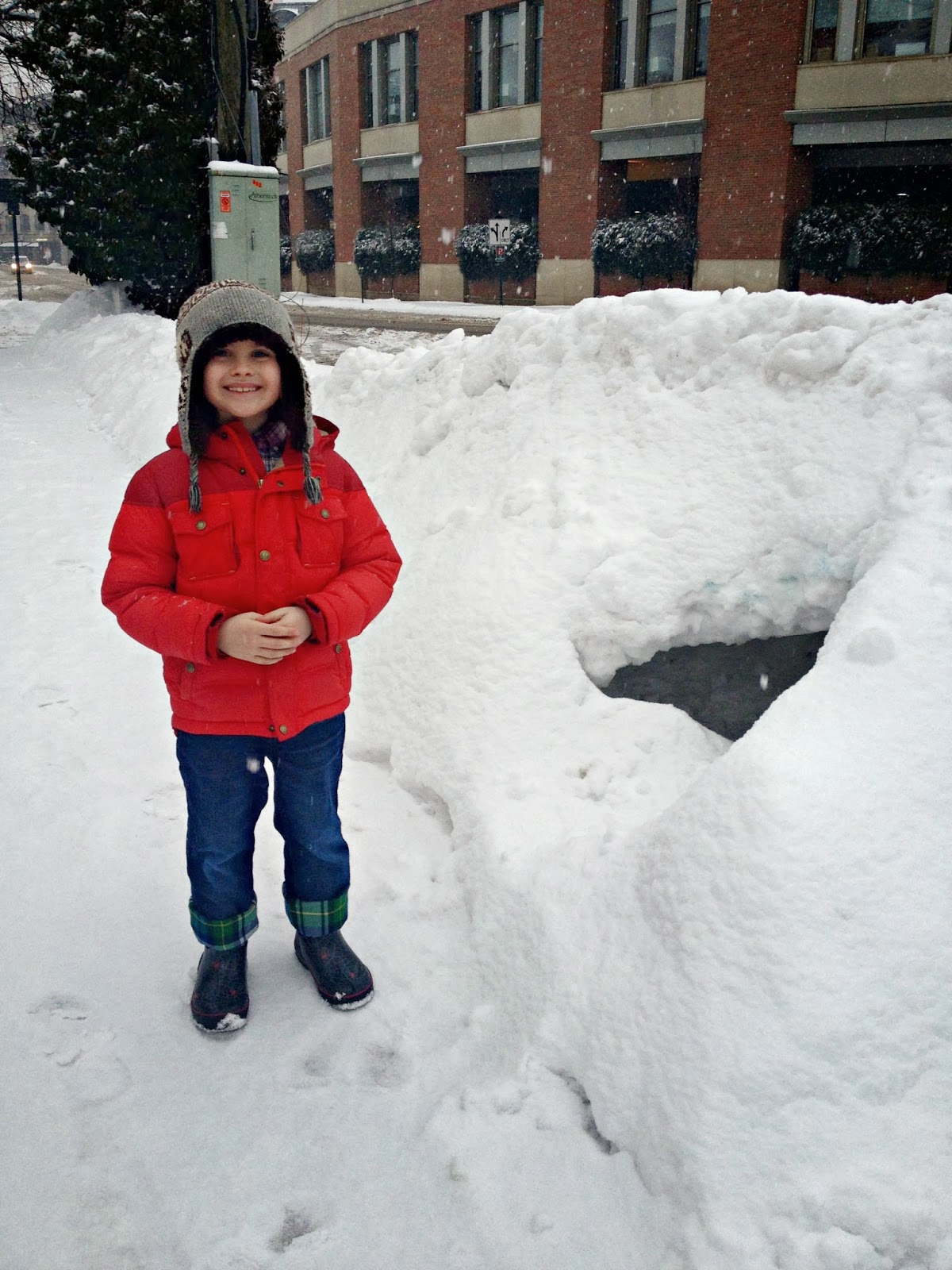 After a leisurely morning, we walked to the library. This is the library that I've gone to my whole life! (Except for when I was in college and when we lived in San Francisco).  I even worked here in the circulation department, twelve long years ago. The children's room is housed in this 1960's addition. The original section of the library was built in the 1920's and is just beautiful. I'm not sure what happened when the 1960's addition was constructed, but I do know that the new modern, wrap around front that they stuck on the library in 1980's, caused a huge up roar.  I'm not surprised, it totally obscured and did away with the classic 1927 front of the building. A modern aesthetic can be nice, but so can a respect for history, and one might argue that the library is one of our town's finest built and most beautifully classic buildings. It's one of only a handful of historic structures still left! 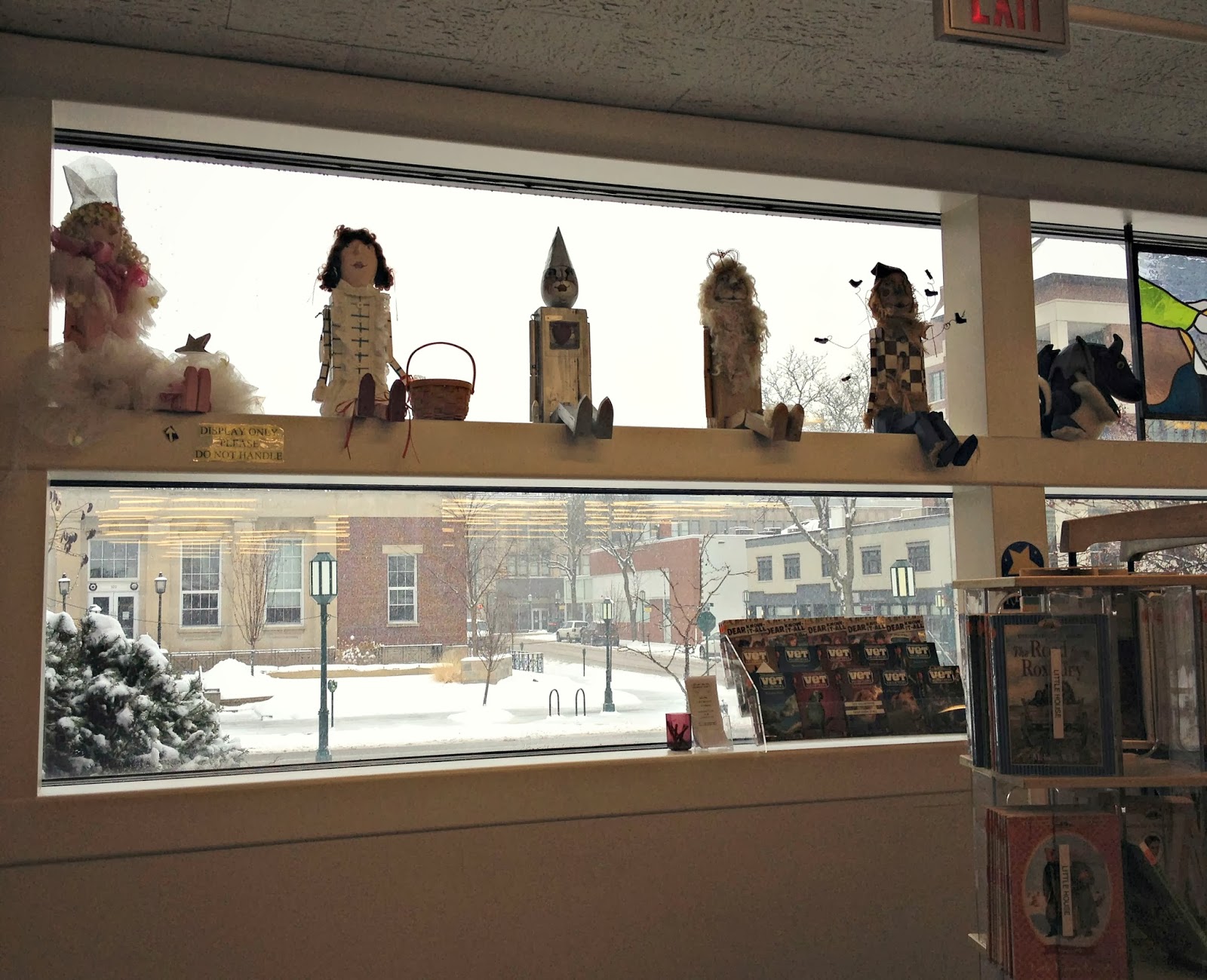 I couldn't take too many photos because there were a lot of patrons around, but you can see some of the original, beautifully carved ceiling beams, the pendant lighting, and the large, arched windows.
Right now there is a big debate going on, lots of planning, and daily news stories. For some time there has been a discussion about renovating the library once again. It's much smaller than surrounding communities' libraries, both in square footage and collection size. We are also lagging behind in the amount of technology available and things like having a modern children's room. I personally feel that our library is fine, that being biggest isn't always best, BUT..... by far, people in my town pay much higher taxes than in the surrounding cities and many people move here for the quality of schools and other services, including the library. The call for a library on-par with expectations is reasonable I think.

Over the past couple of years, studies were done, surveys carried out and meetings had. Several plans were released for renovations, a couple more extensive than others. And after a vote, we ended up with a final 21 million dollar proposal. Which, is  kind of a large amount of money for a library renovation in a town of just over 20,000.  I think.  At least it feels this way. I'm kind of on the fence. 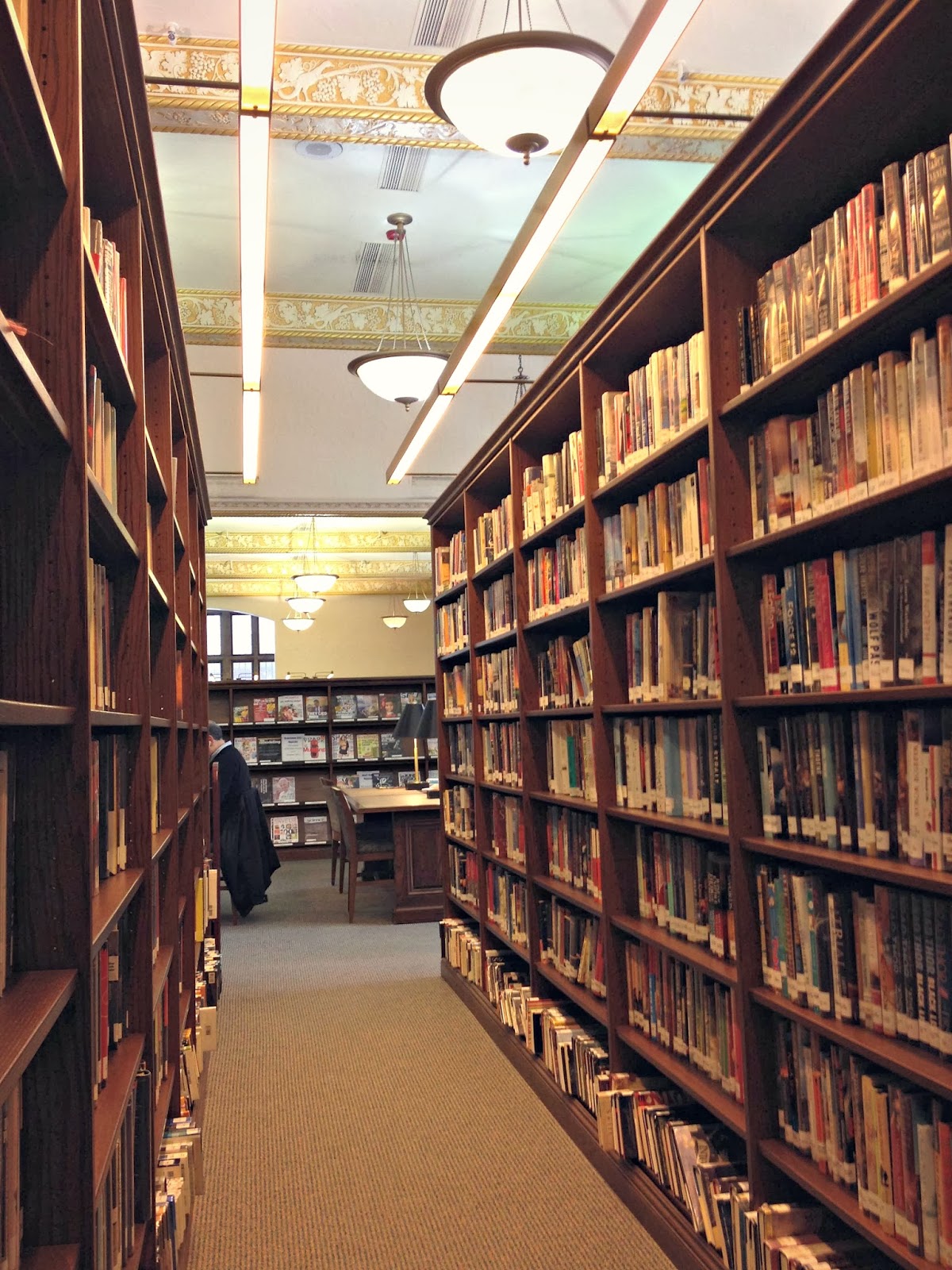 So now everybody is squawking. I kind of feel like squawking too, but mostly because the plan that they feel is architecturally sensitive to the original building, is actually NOT. Yes, it may have a few peaked roofs, and architectural throw-backs to the 1920's with a "contemporary slant",  but if you saw the plans, it's really just a bland at best, contemporary take on Tudor architecture. No small details or arched windows. No slate roof like the library now has. You'd think for 21 million, SOMEBODY could get it a slate roof.  I think we should find a way to make a smaller addition, with nice curation , and an architectural design that's sensitive to the original building. That's just my two-cents. Like a little, literary gem! 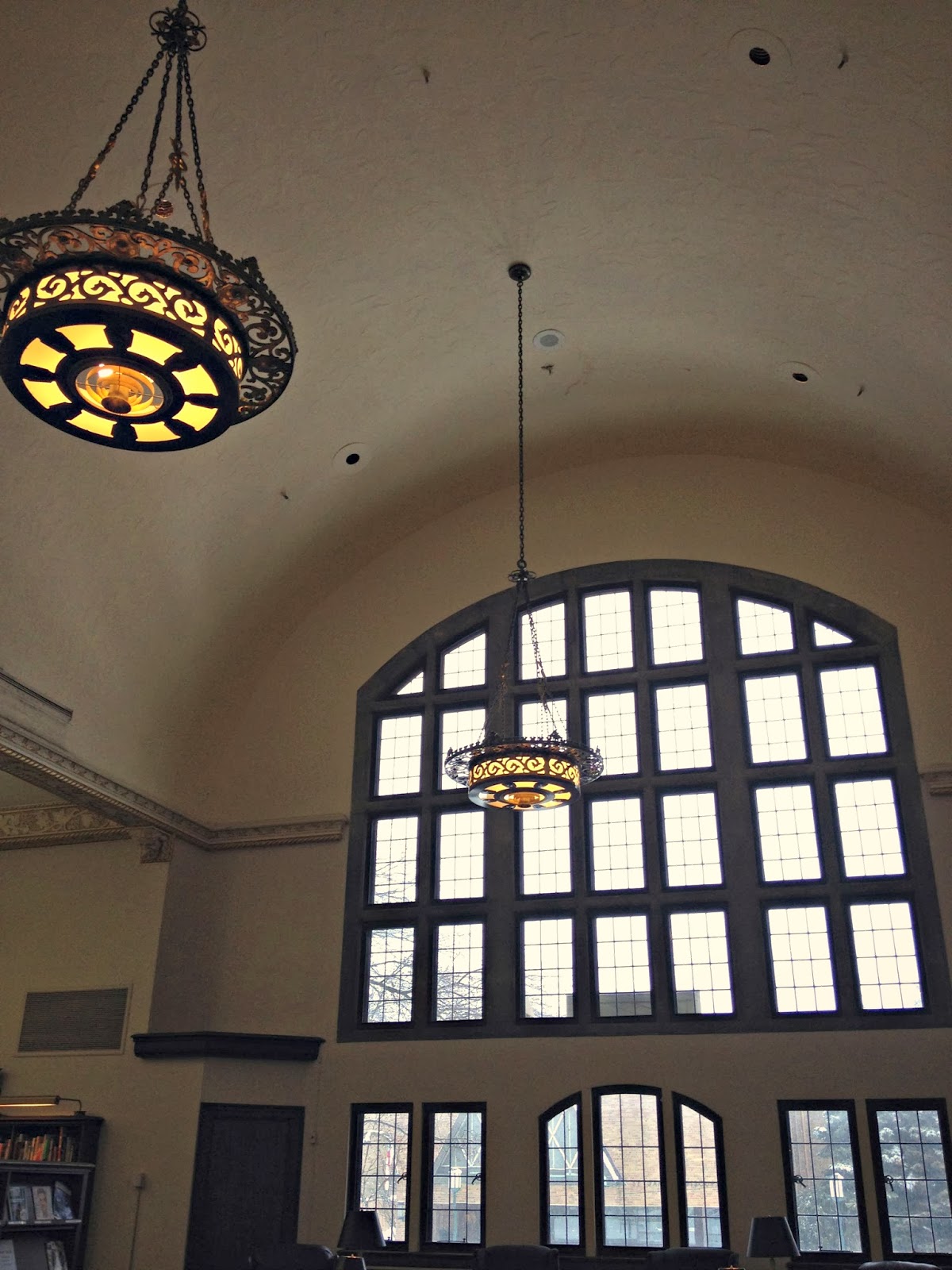 After the library we went home. And since now more than an entire week has gone by, I honestly can't remember what we did next. I think it might have involved some more shoveling, and I'm sure snacks.
And as the evening rolled around, we decided to walk to dinner. Actually, at first there was discussion about pulling Noah to dinner in a sled, since it had been snowing all day and the sidewalks were covered. We decided against it after imagining the restaurant being not too happy about a giant red sled parked in their vestibule, but I later regretted leaving it at home when we saw another family sledding through town. 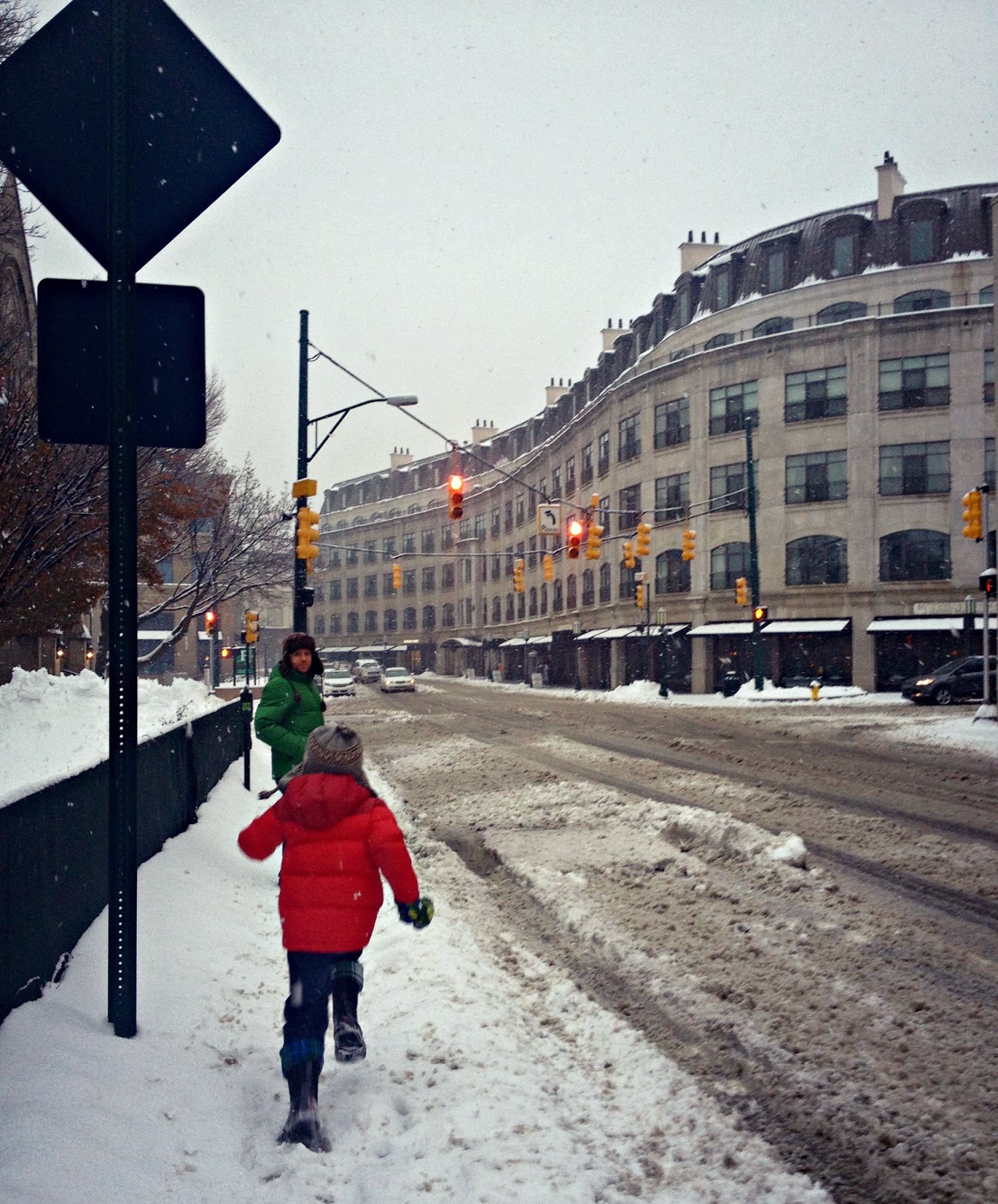 Town was beautiful. Snow covered and quieter than usual. 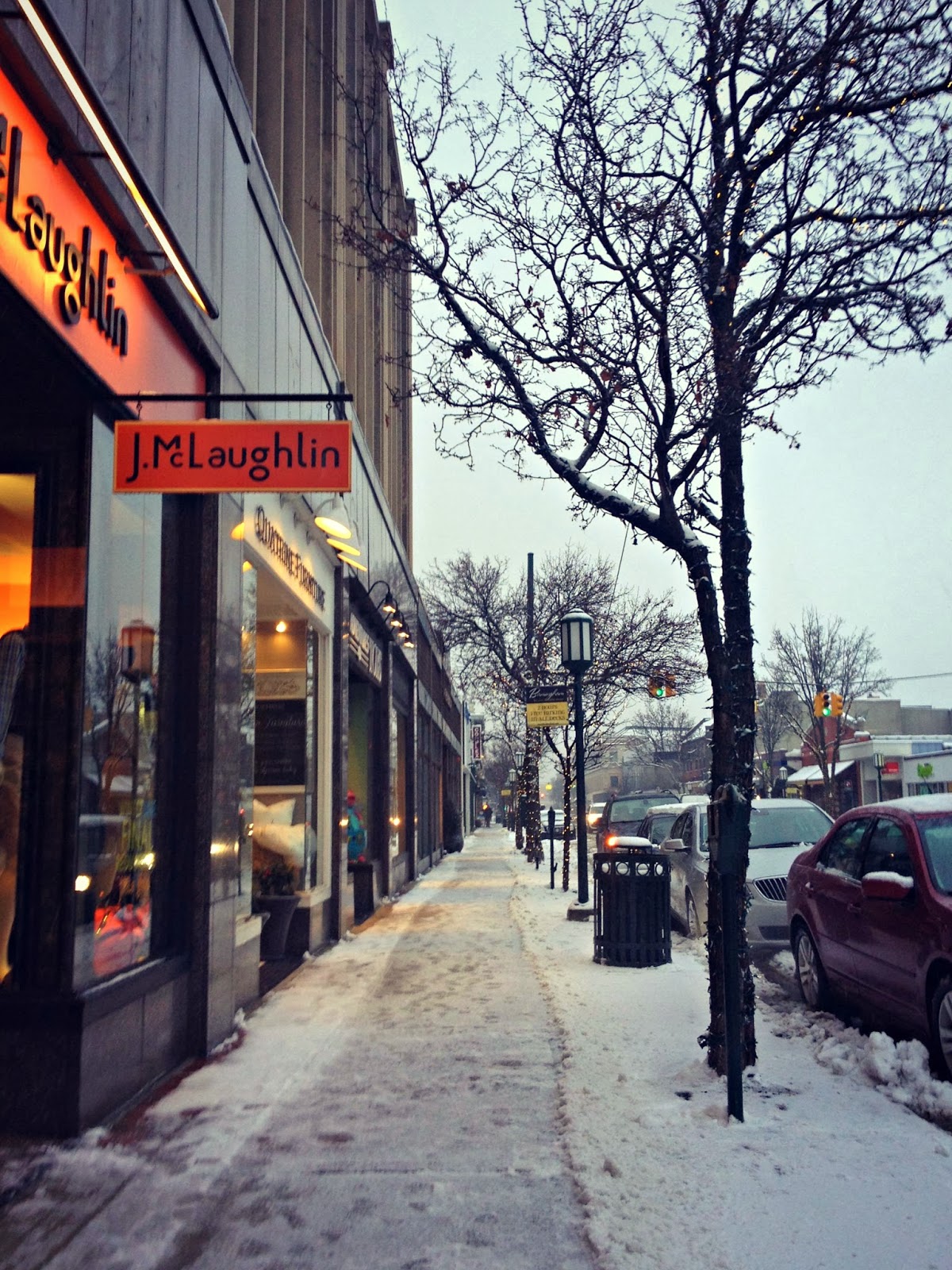 Along the walk we I window shopped. 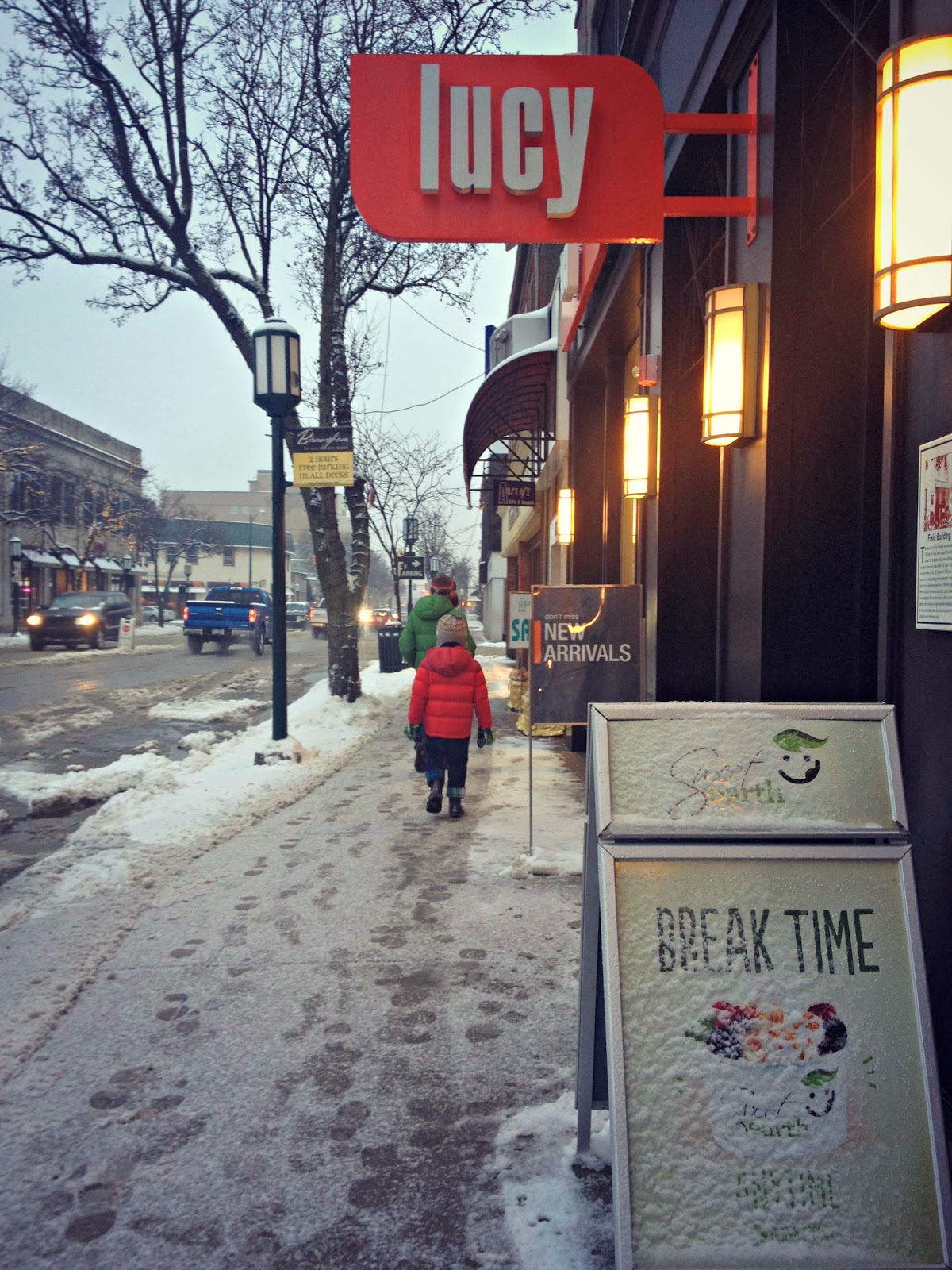 My two favorite windows being  Anthropologie and Paper Source. 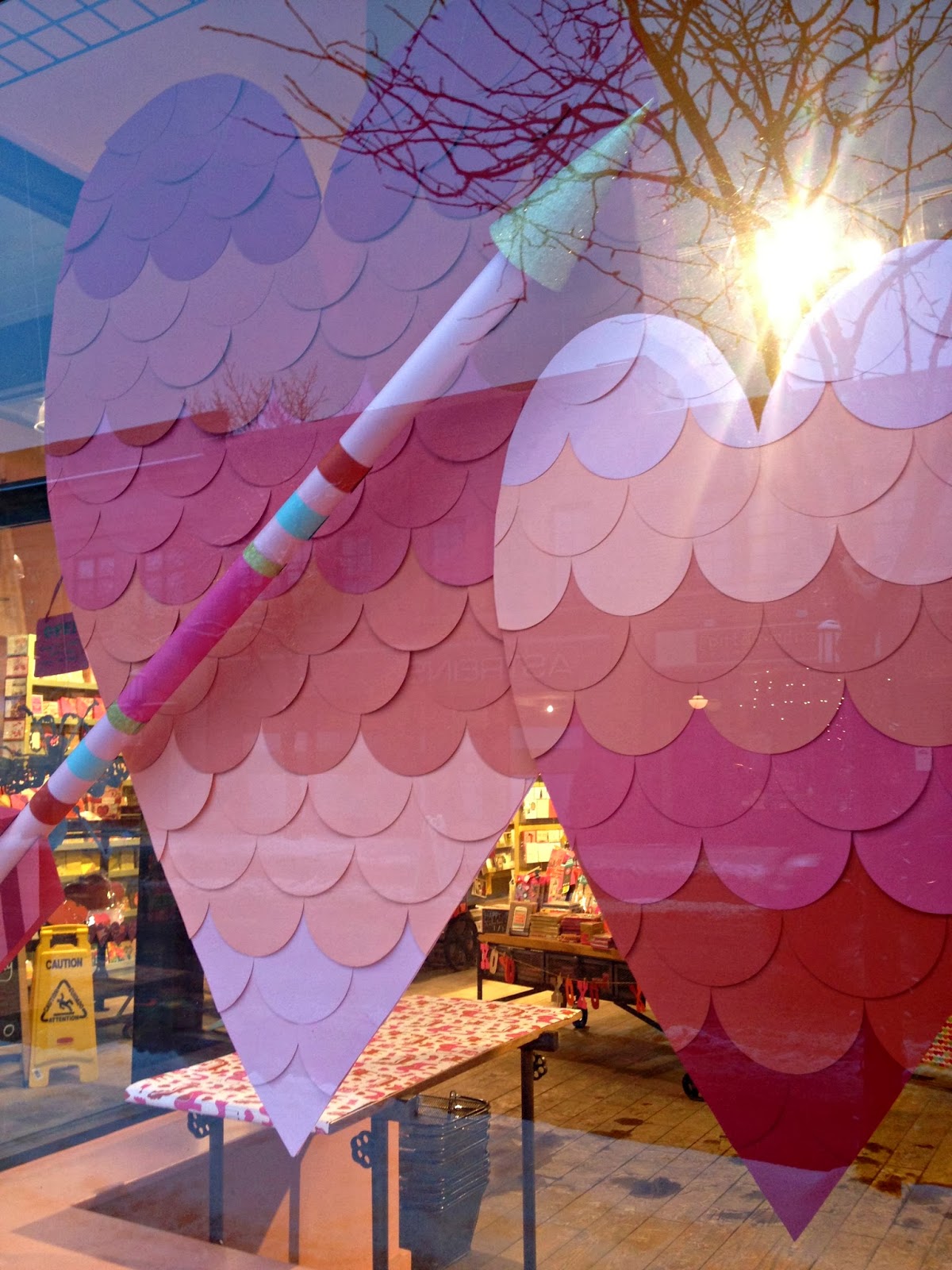 We finally reached our dinner destination. 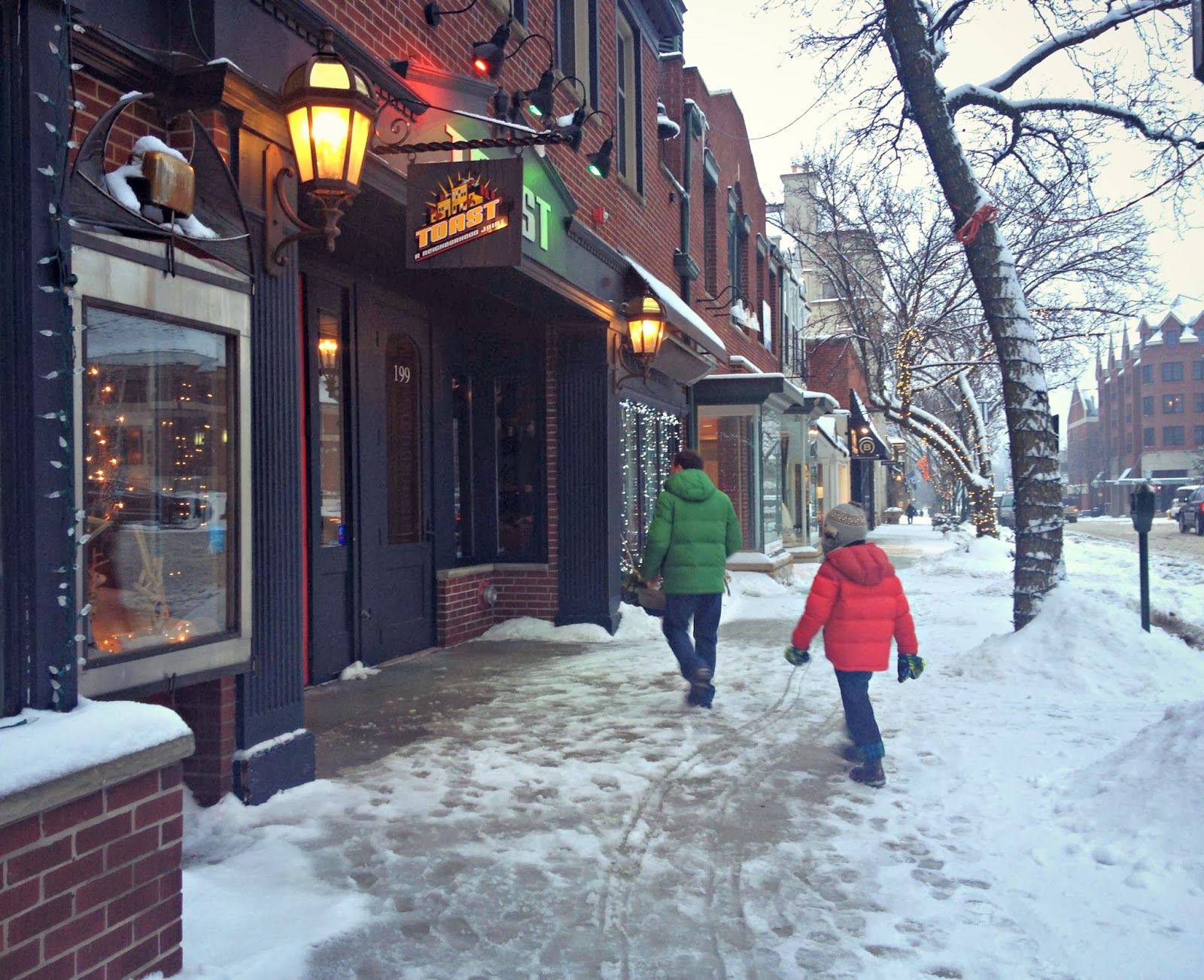 Jon had a much earned beer from an Ann Arbor brewery called "The Jolly Pumpkin." 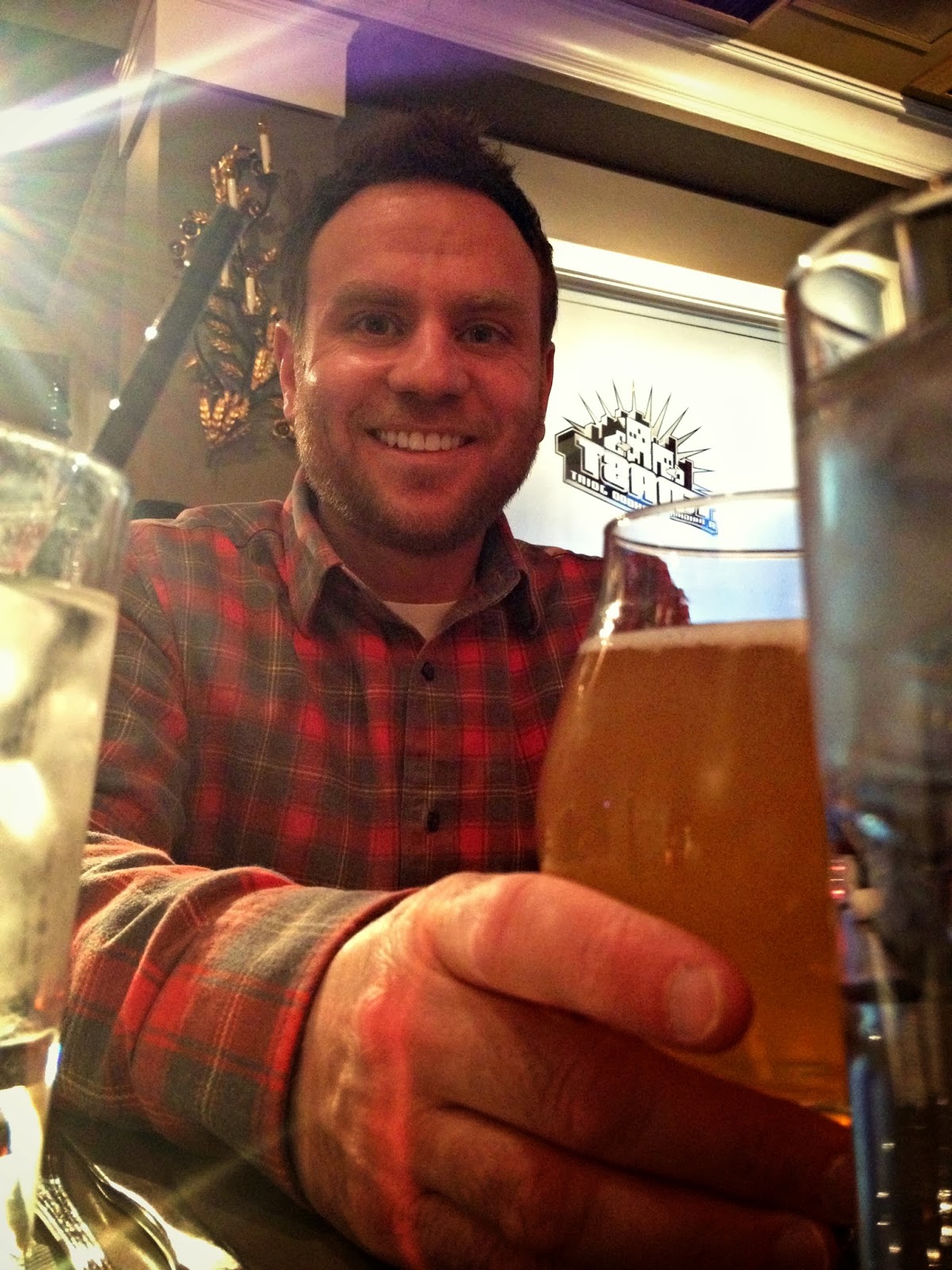 I went with one of my favorite dishes of all time.... their ricotta gnocchi. The gnocchi here is unlike any other gnocchi I've tasted! It's incredibly light and fluffy, not firm like most gnocchi. They also change up the way that they "Dress" their gnocchi dish with each season. Once it was served with tender peas, what I remember as a lemony cheese, and a small egg on top. The winter creation has been my very favorite so far though. This dish had wild mushroom, asparagus, roasted garlic, spinach and grated Romano cheese. 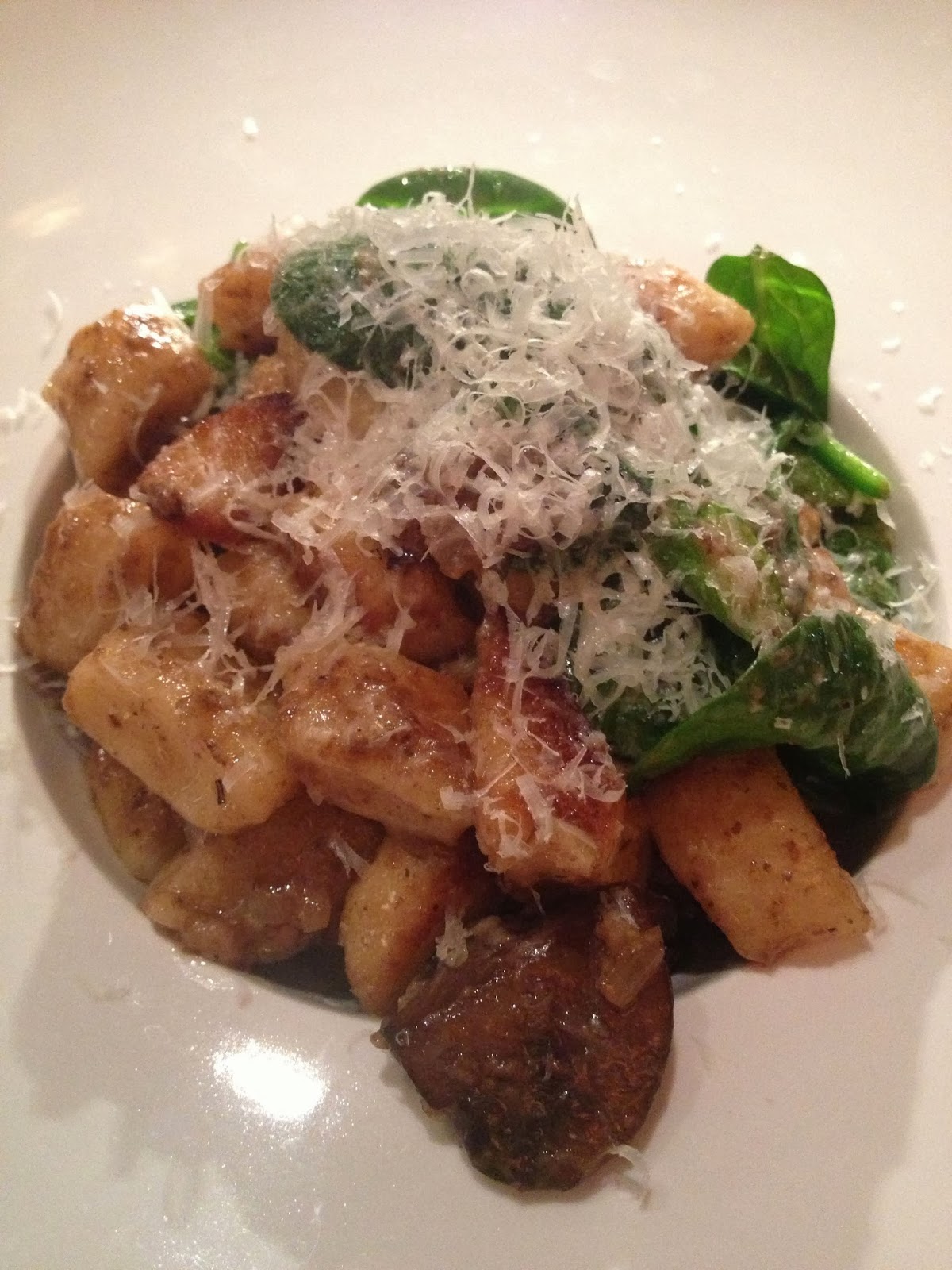 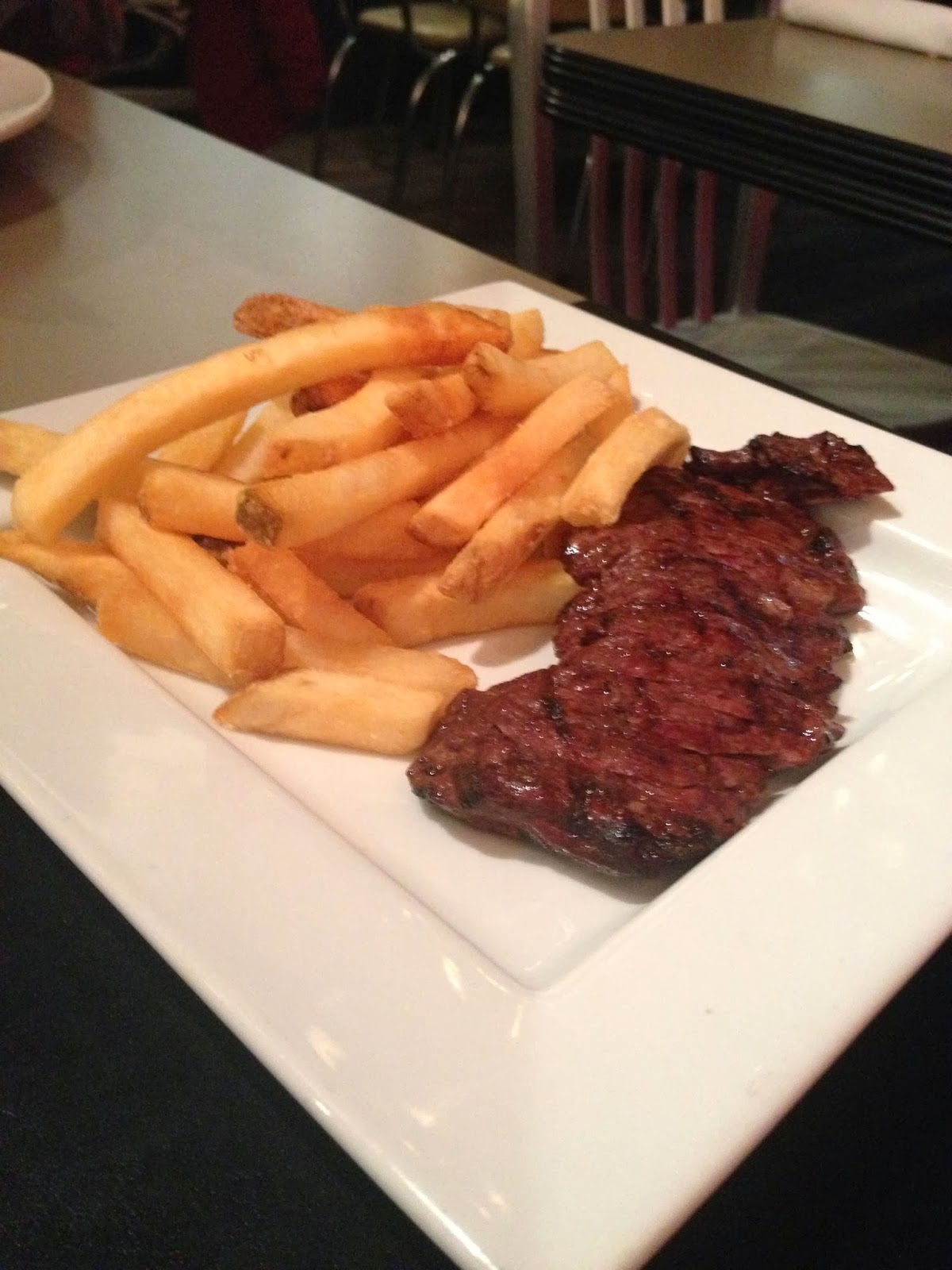 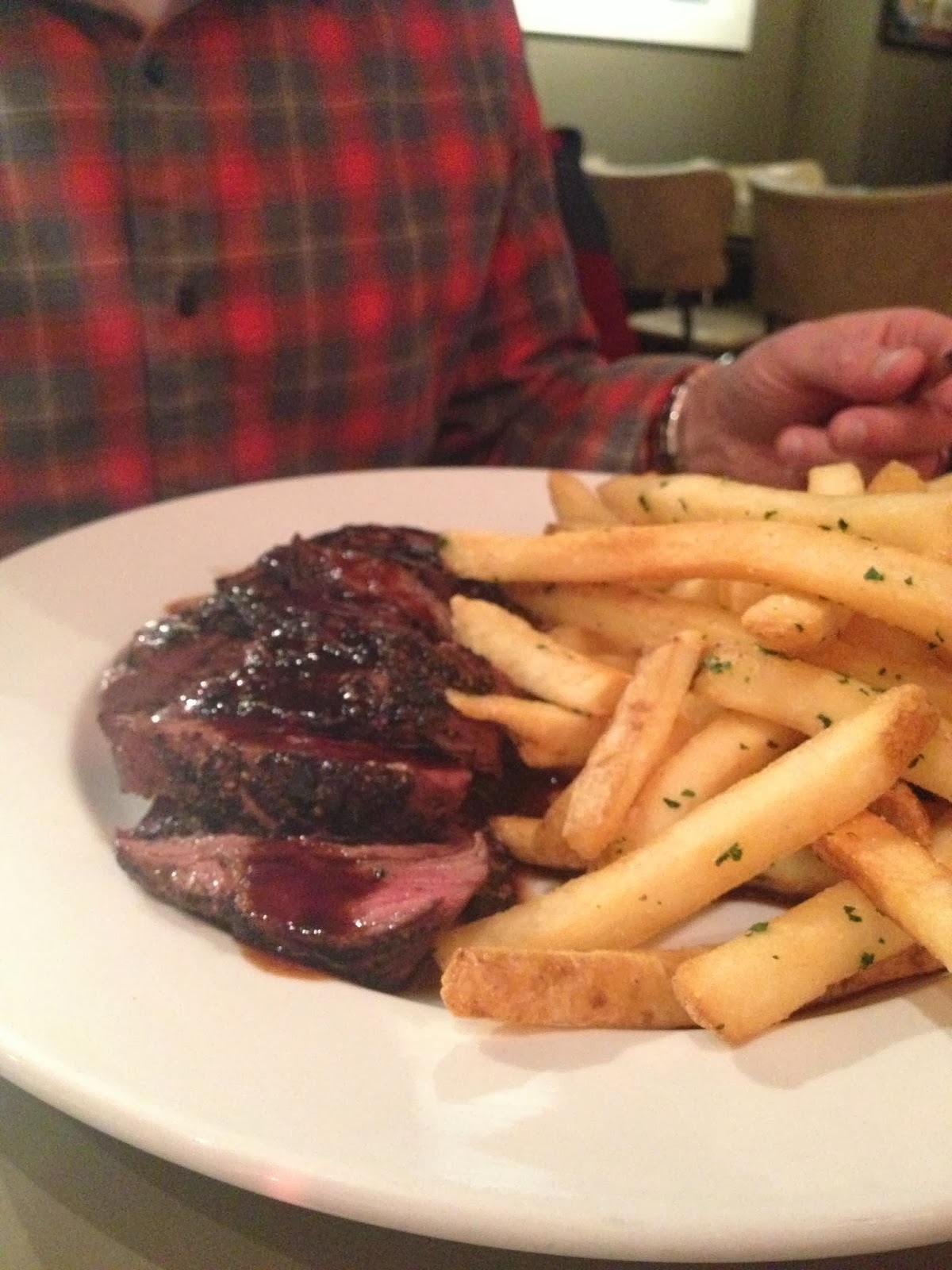 After dinner we thought about grabbing a coffee and taking a walk. Maybe going to the park to let Noah run. But, it was already dark outside and cold, so instead we settled on hot chocolate for the walk home. 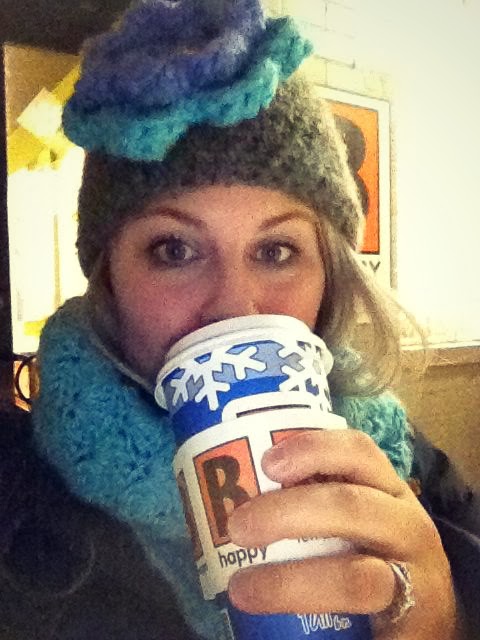 On the way I stared at Paper Source again. Doesn't it look like fun!? 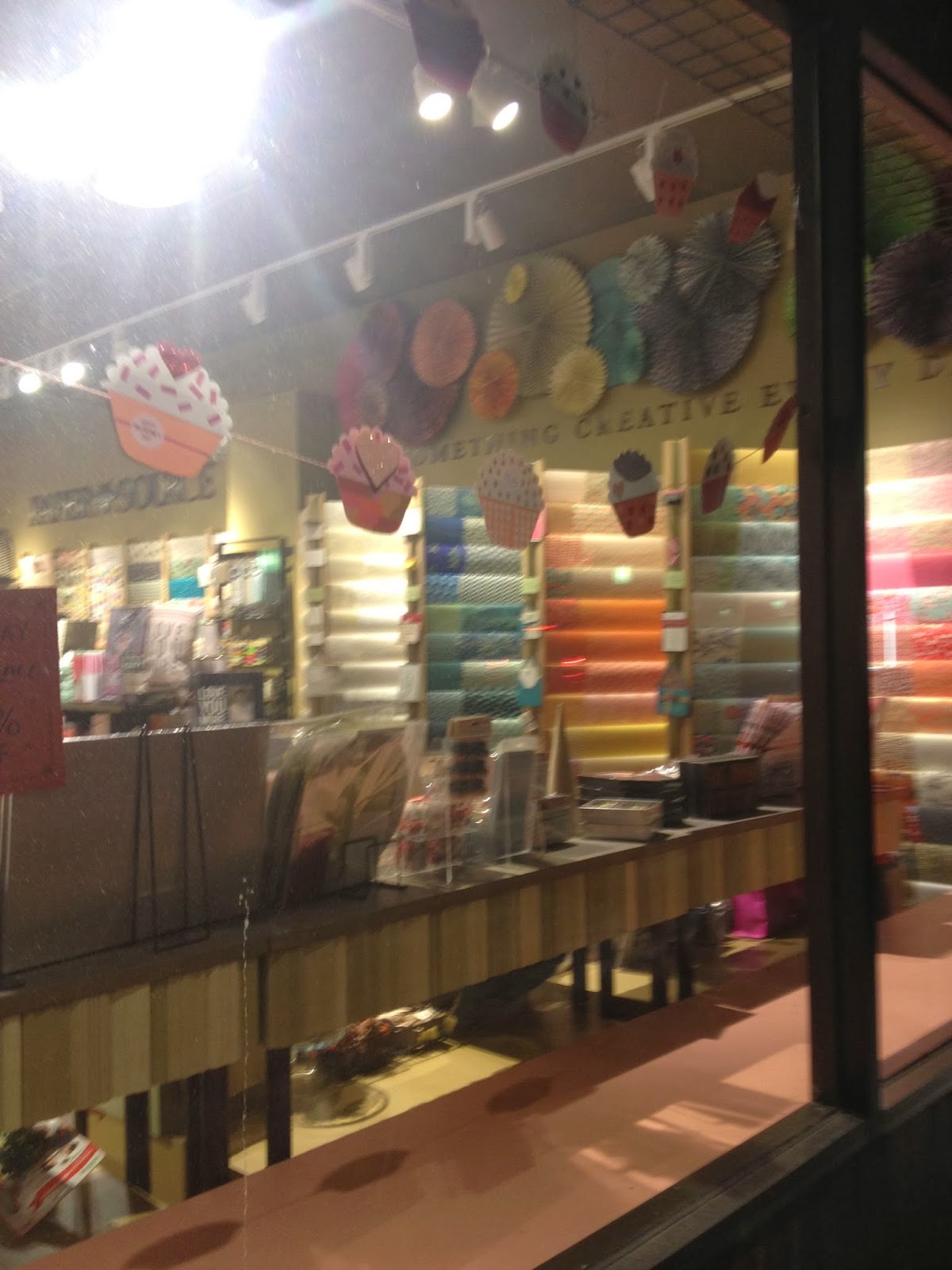 The walk was soooooo beautiful. The night was still and quiet. 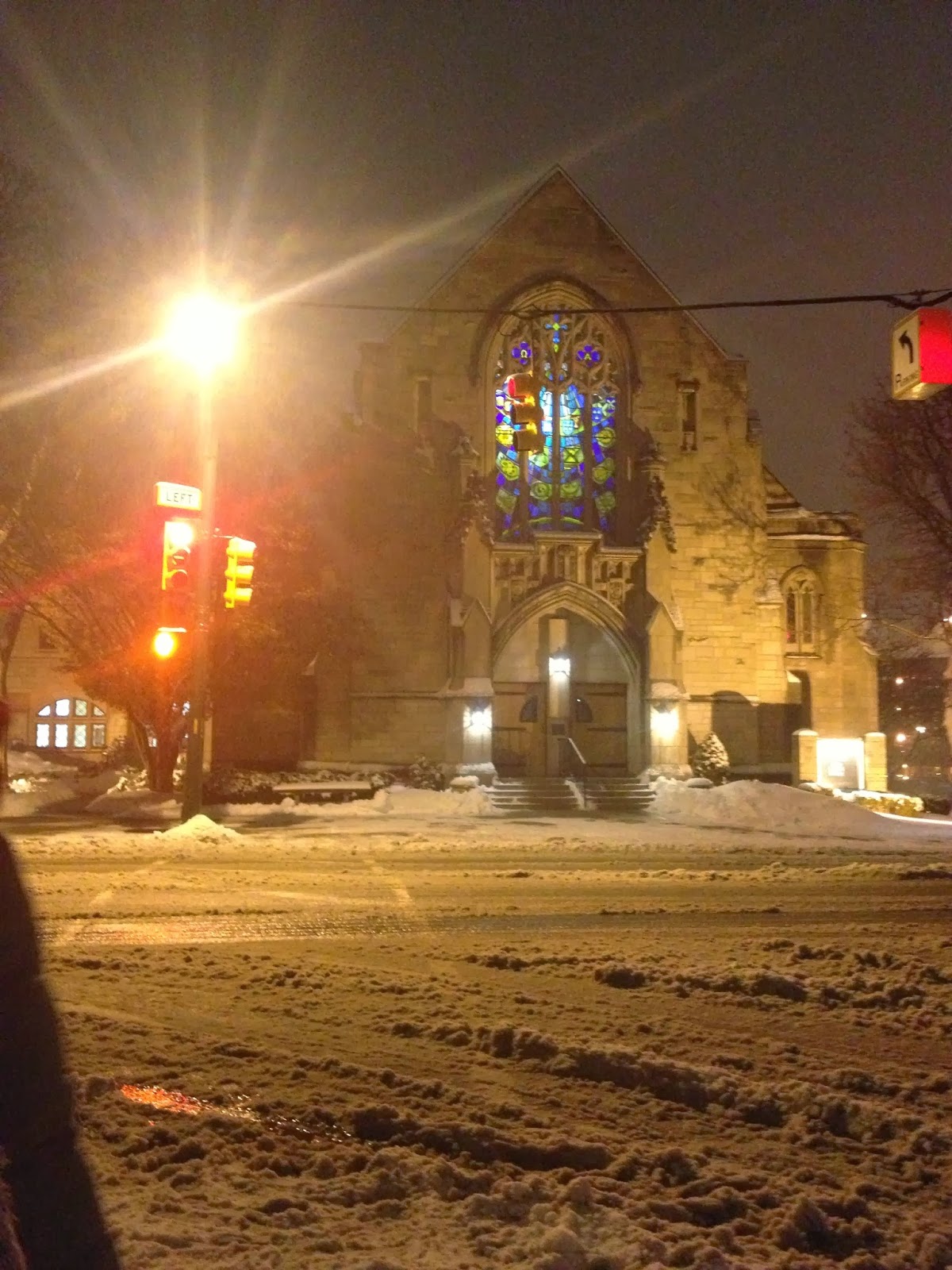 The snow was pretty big. 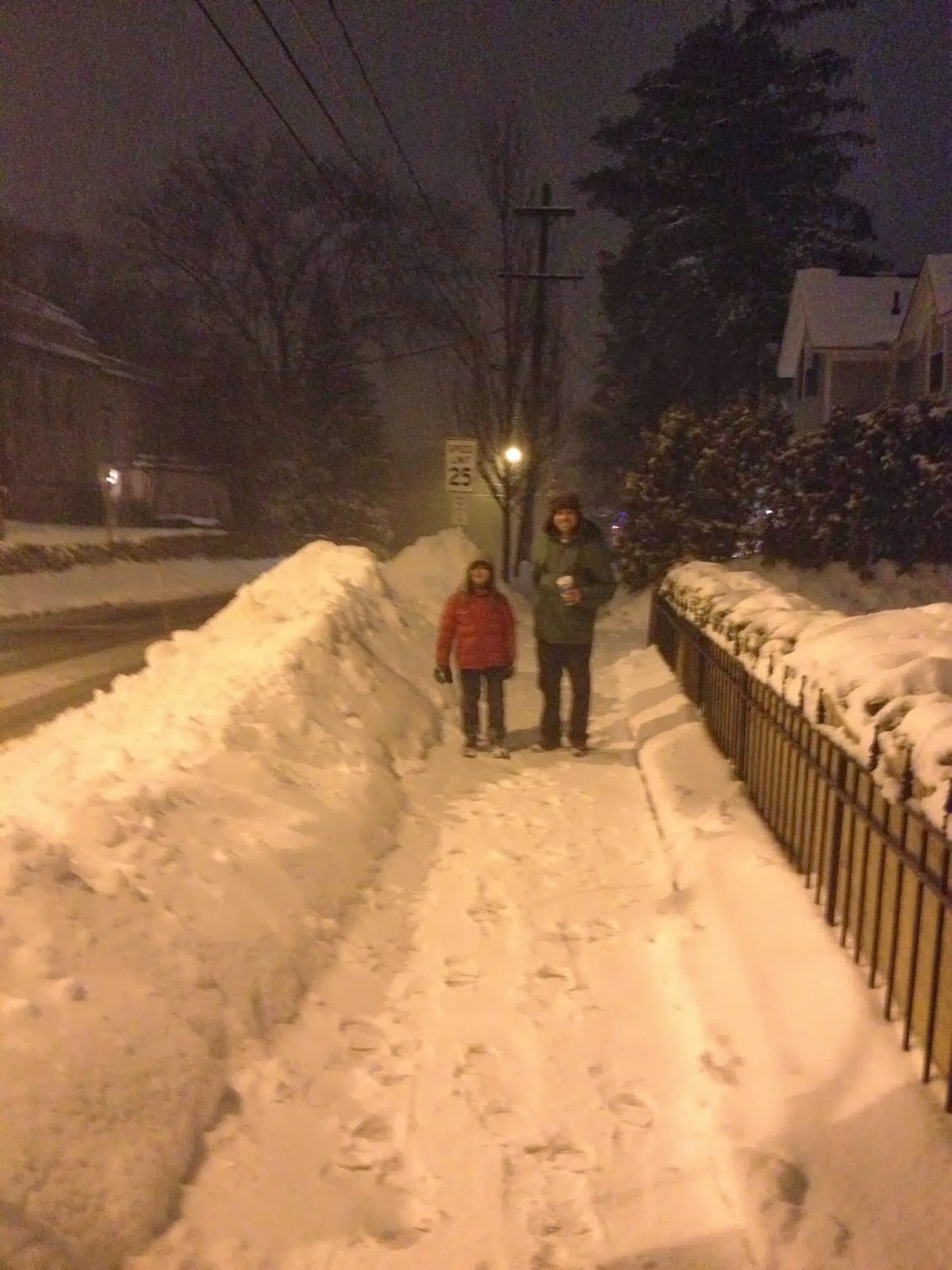 It was a perfect kind of Saturday. 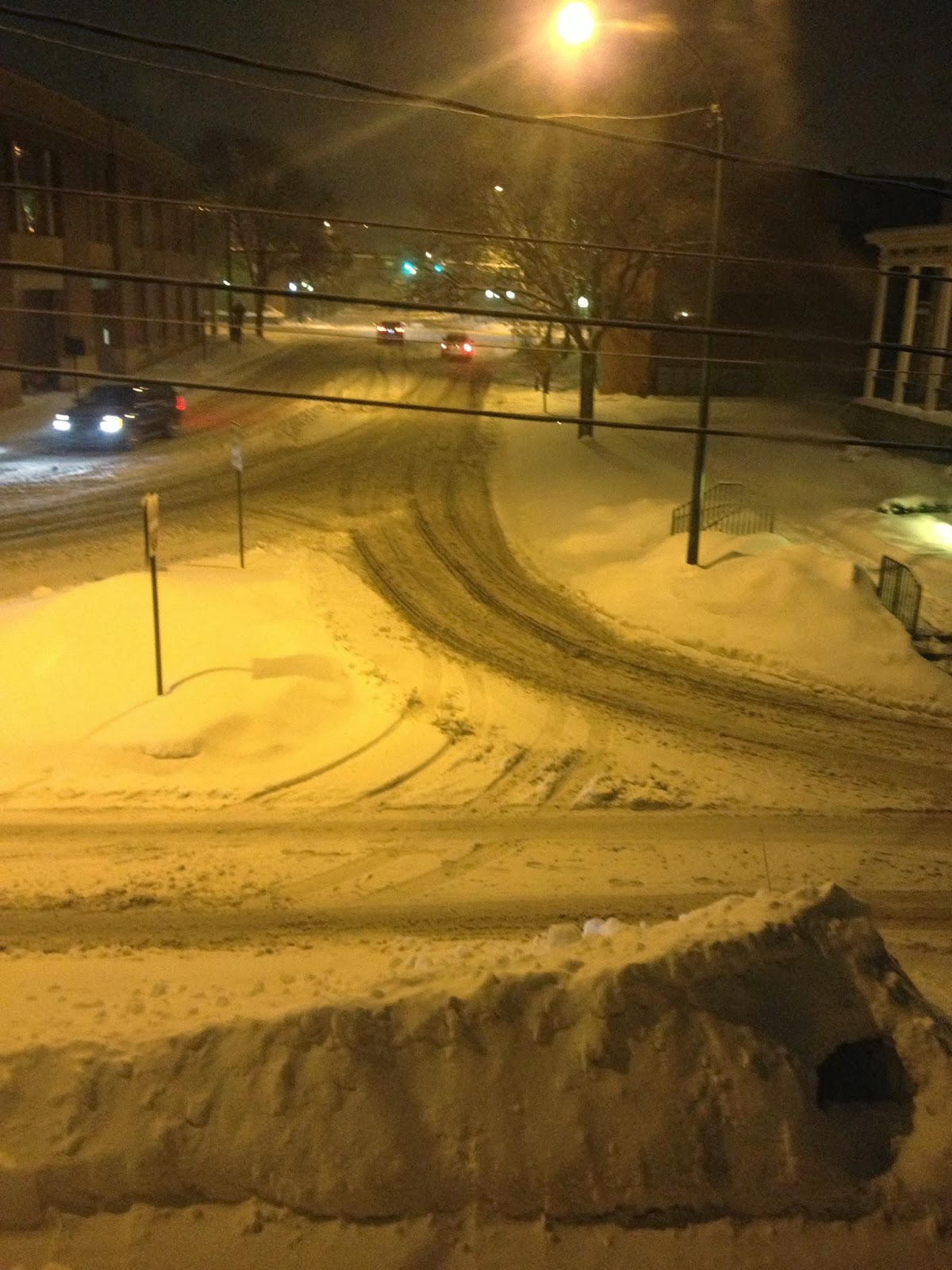 Until another Saturday, have a great week!
xoxoxoxo,
Lauren

Ooh, Miss Lauren, thank you! I've just found your site - my newfound obsession with going grey is what did it! I thank you so very much for your posts on that matter - you've inspired me to just do it! Hoorah! I'm now gonna sit back and utilise the patience I've been trying my best to develop in the past 41 years. You rock girl and I'm so glad to have 'met' you - a sister in gray/grey (we do grey different here in Australia, blame the British for our spelling!).
Keep up your awesome blog, it's a great read; positive, fun, quirky and rather lovely. Hoping you won't mind if I link to you for my gray 'announcement' from my site?
Love Beck
www.mrsjonesvintage.com